Crothers99 said:
So glad you are going in the water finally! Great posts. Currently in Fort Pierce getting the prop shaft and strut replaced.
Question, I need to improve the insulation in my deep frig of my Hunter 40 1988. Before I attempt to dig into the project can you share some photographs of what you found when you demo'd you galley?
Click to expand

Unfortunately I didn't start taking pics until after Galley v1.0. I improved galley v2.0 with v2.5 - that's when I started taking pics. I looked through all my old photos and came up blank - sorry . As I remember from the original galley, the insulation was a nightmare and the cabinetry surrounding that area was probably inserted prior to the deck installation. Lots of hidden fasteners, everything was glued together and it was very hard to discern how to take things apart without destroying most of the pieces. That's what got me started redesigning galley v2.0.

I do remember that the foam insulating the fridge had lots of voids and trapped water behind the box. Found some mold back there too . Most of the larger pieces and the fiberglass fridge box were too big to fit through the companionway which is what leads me to think everything was installed pre-deck.
B

Ok, bilge first. Got two coats of primer on: 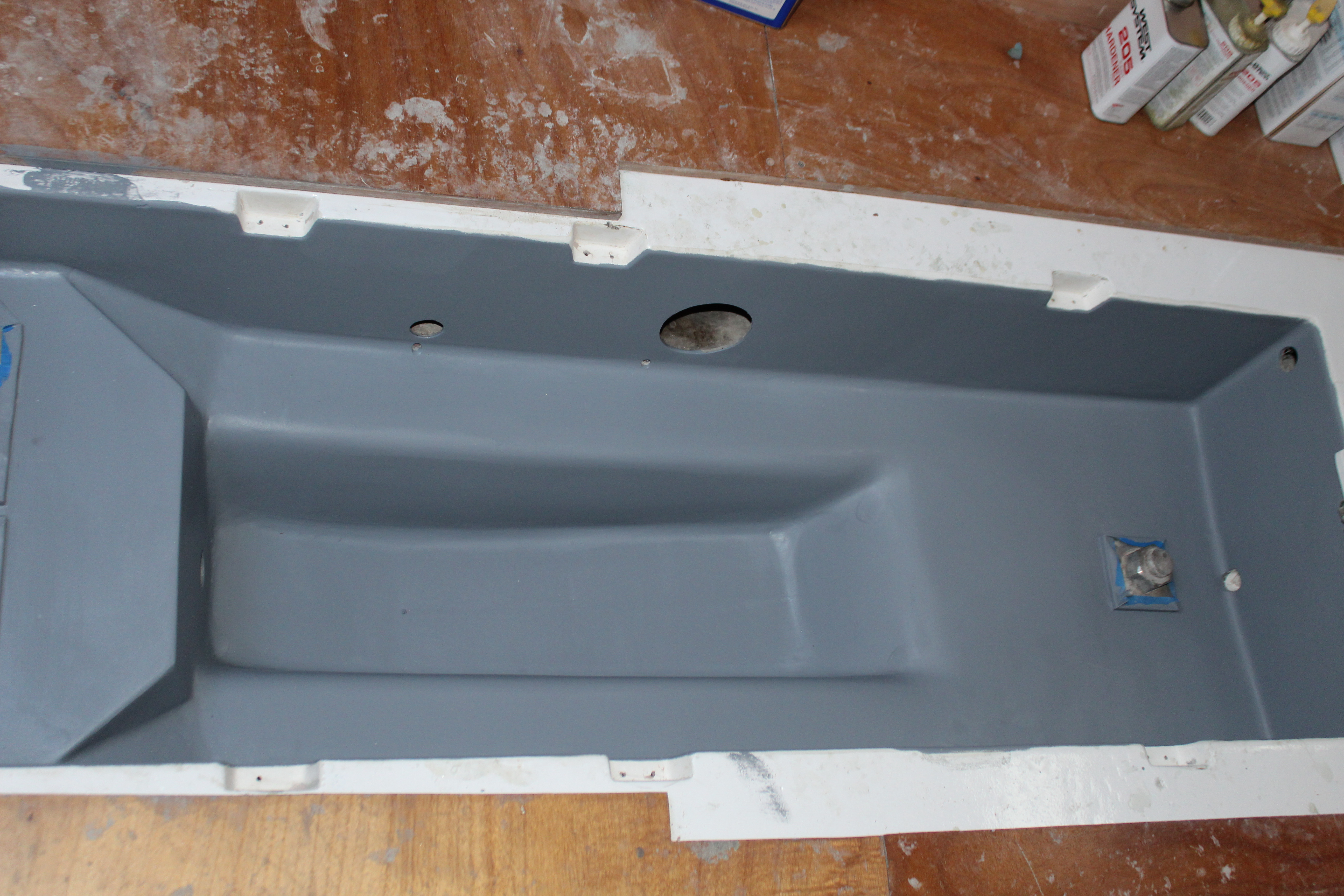 A light sanding and one more coat then paint. The end (of the bilge repairs!) is in sight

The general consensus about the existing transducers is that they gotta go. I heartily agree so time to get to work: 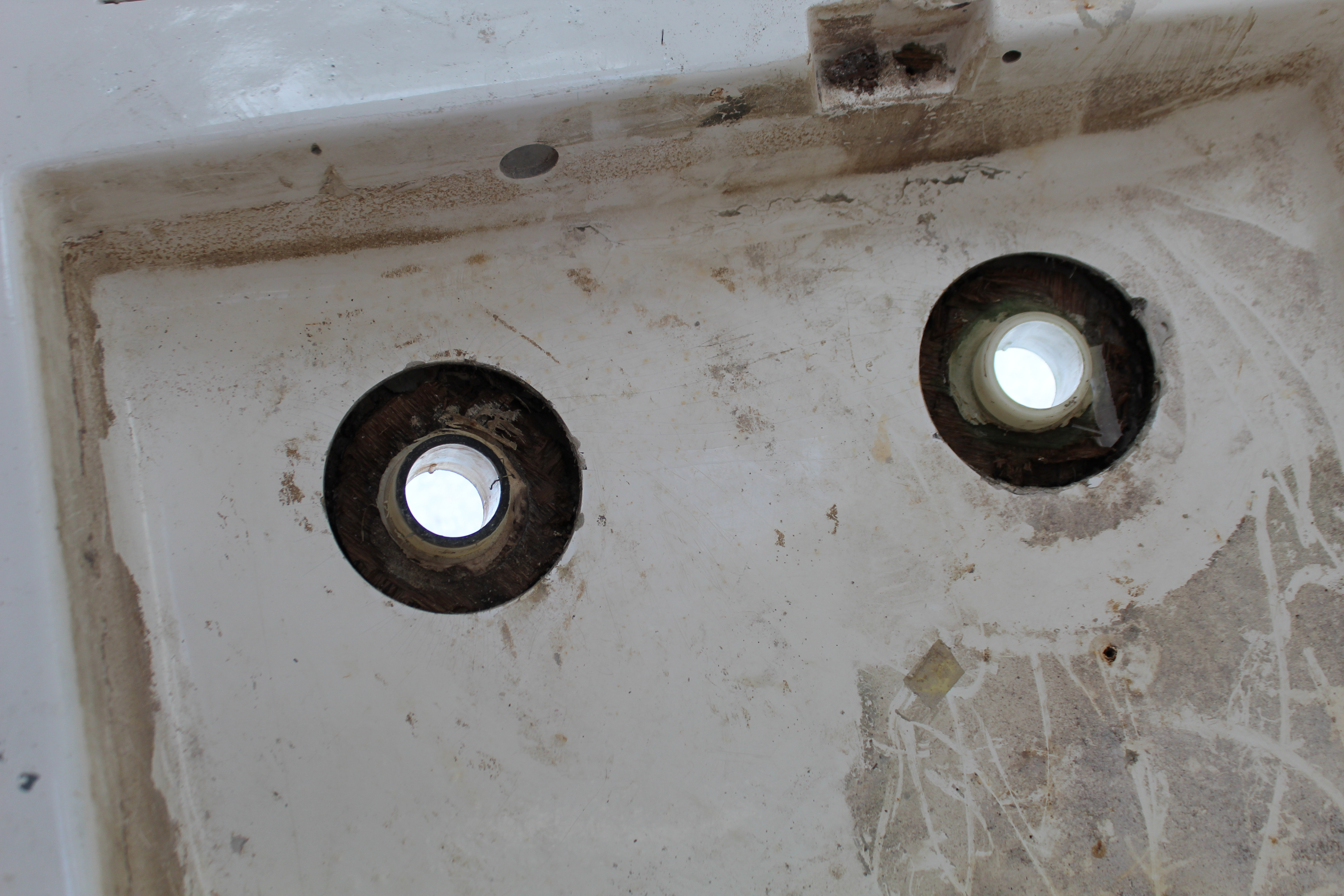 First up was to dig out the mass volume of sealer surrounding the tranducers. This right here is a good reason for doing this. Putting the transducers in the shower sump - bad idea. I'm not sure if the transducers were installed before the liner was placed in the hull (probably, followed by an oops moment then getting a holesaw and hacking up the shower sump) or after, but it's a good way for gray water to get under the liner. Even if I remount new thru-hull transducers I'll relocate them to a better spot.

I then got the lock rings off and started cutting: 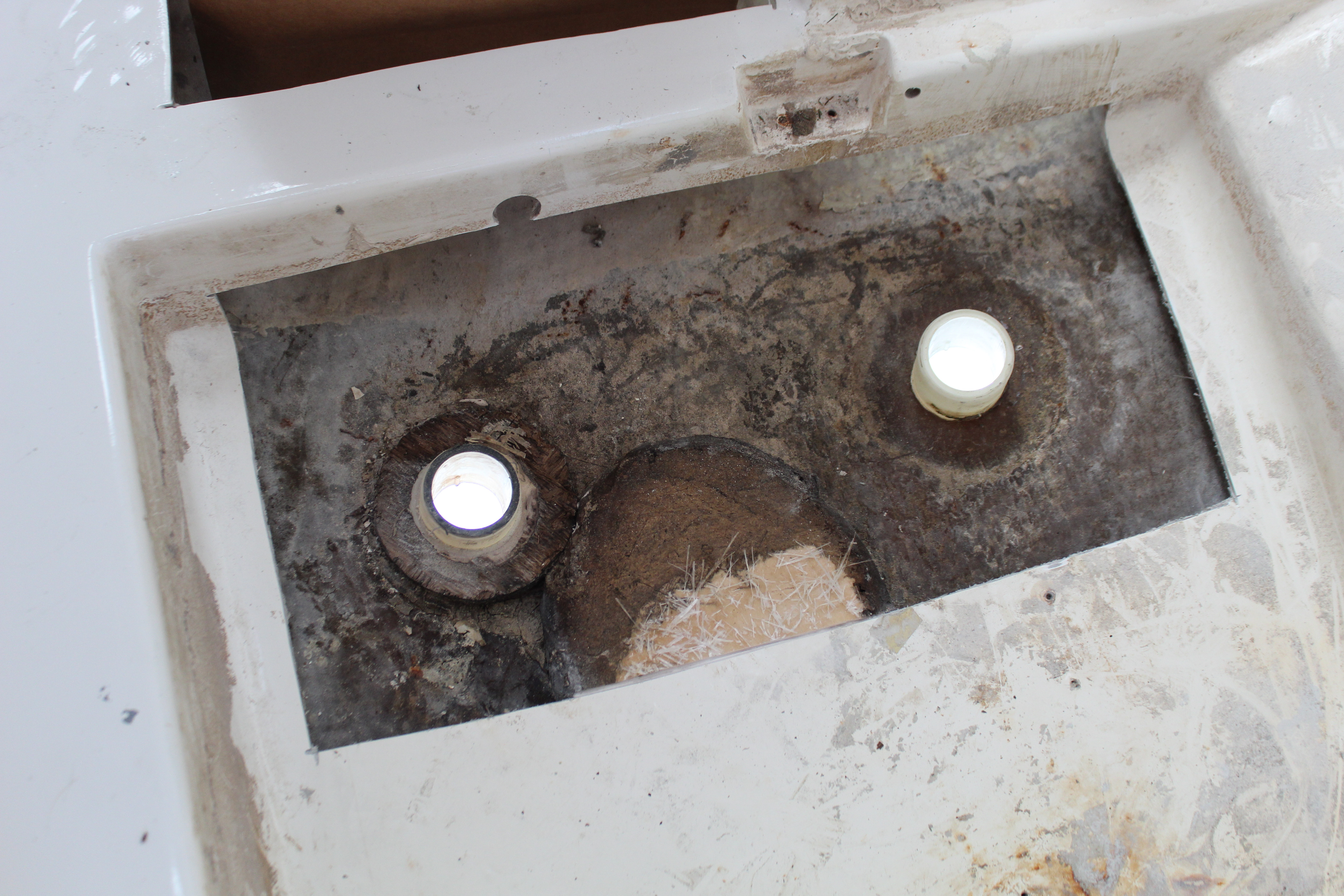 Two things of note here - the backing plates were plywood and were not encapsulated, thus rotted and came off in pieces and chunks. I saw this also years ago when I replaced all the thru-hulls on the boat. I have no problem with using plywood for backing plates but you gotta seal them first! In the picture you can see a brownish lump - this is a big glob of glue! That took some time and effort to get rid of: 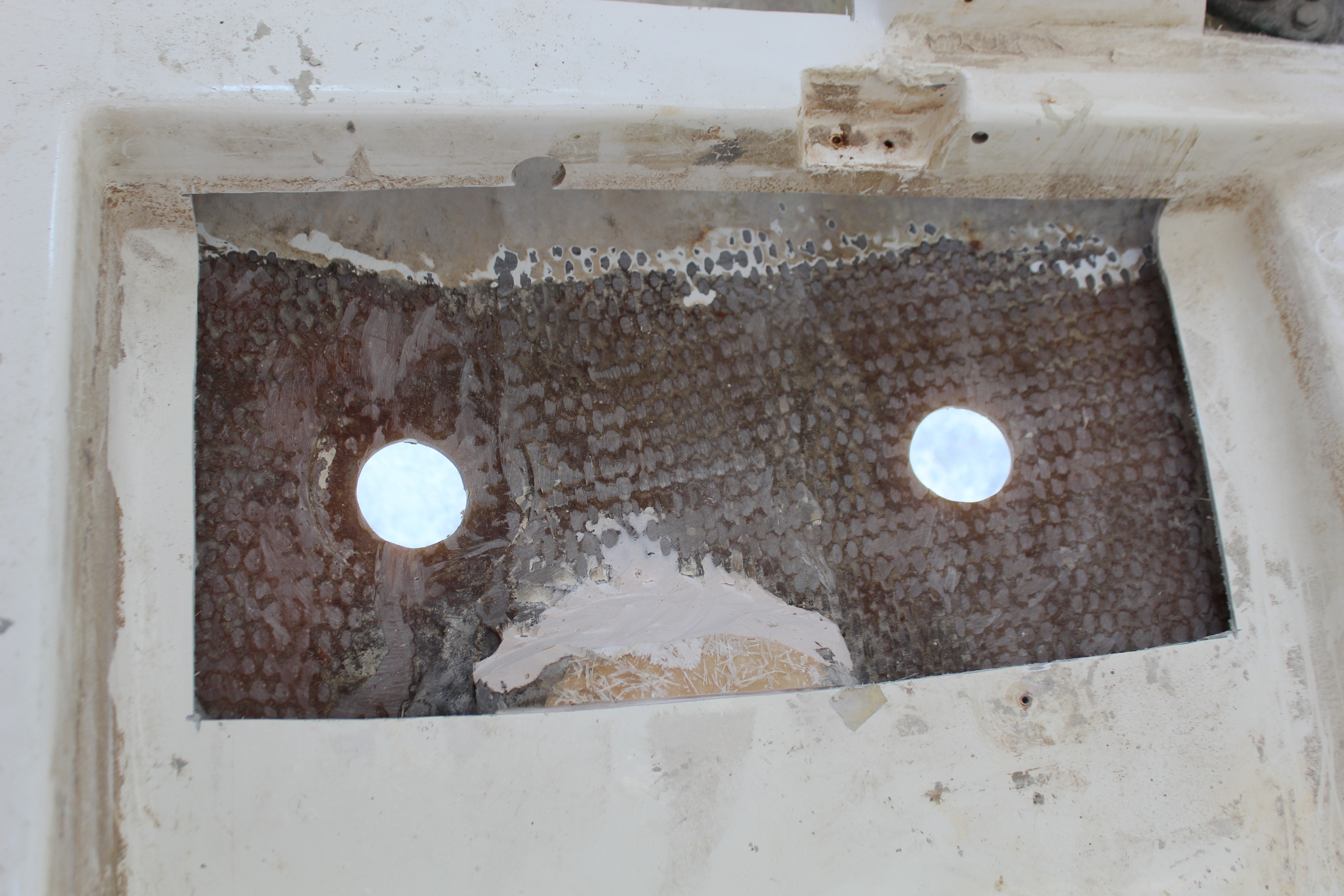 I left a little bit of it at the rear to support the bottom of the sump when I reinstall it. Next up is grinding the taper to fill the holes. I did the outside first then the inside: 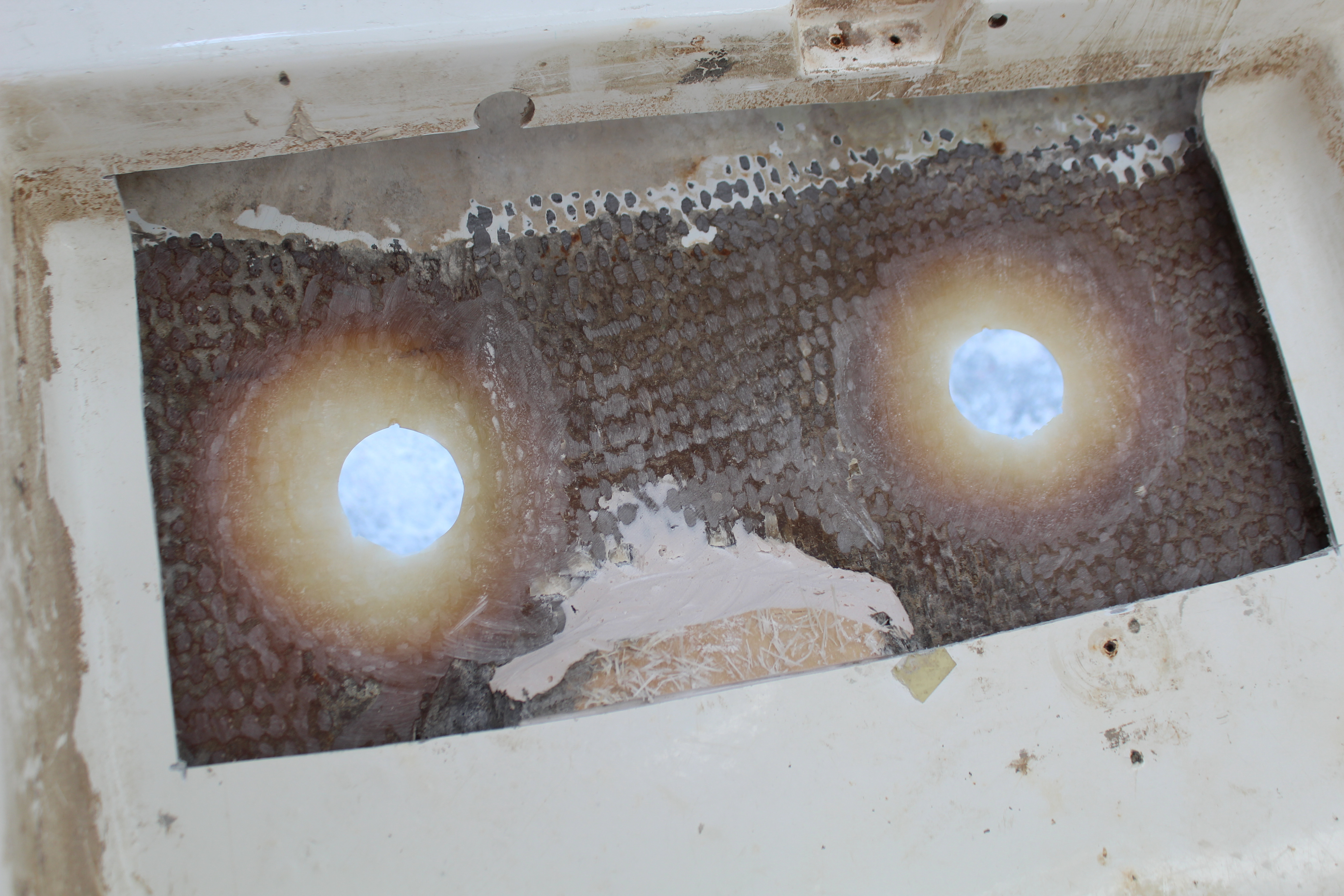 Sorta looks like a frog! Hey Kermie, you watching? After some cleanup I taped the holes from the outside and got 4 layers of 1708 on the inside of the holes: 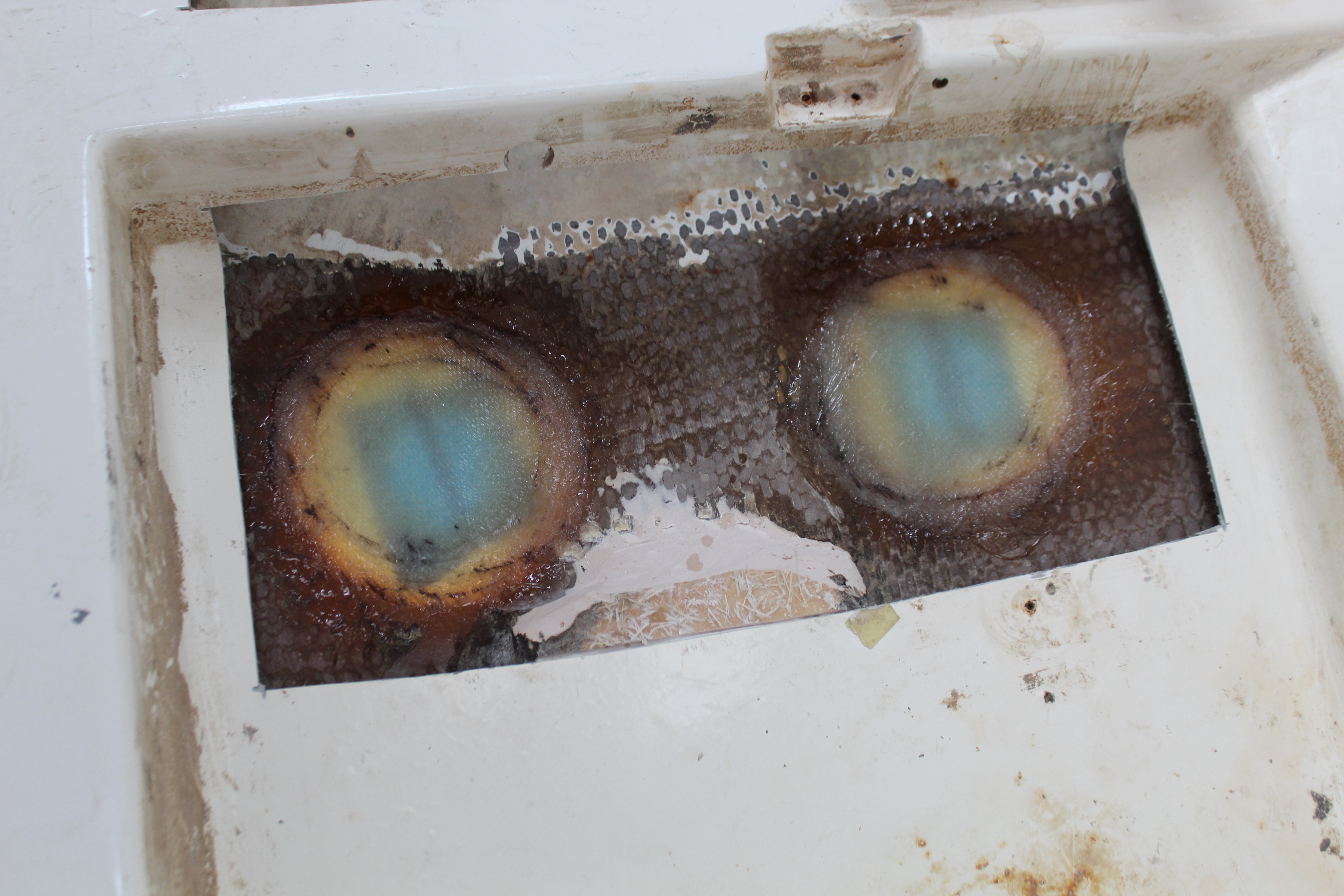 I'll get the outside layup done today and start grinding on the sump to get that back together. Plus come up with an idea for patching the two great big holes in the sump!

Catalina '88 C30 tr/bs Oak Harbor, WA
Nicely done. I am curious how thick was the hull at this location?
Likes: Don Crowther