Greta Thunberg sails back to Europe on La Vagabonde

shemandr said:
Actually, re-checking I have version 4.0.
I’m going to start an Open CPN thread for advice about updating and optimizing it.
Click to expand

Davidasailor26 said:
[ quote from Nikki FB post]
After a speedy day averaging 10 knots straight towards Lisbon, it’s been a slow night..[]
...which combined with a over from the wind we had today - makes for a relatively sluggish and noisy time - noisy due to the slapping of the sails from side to side in the swell. The sailors among you will I’m sure remember the sound well
Click to expand

No noise with in mast furling...

Now they are planning for the slow ride ahead... 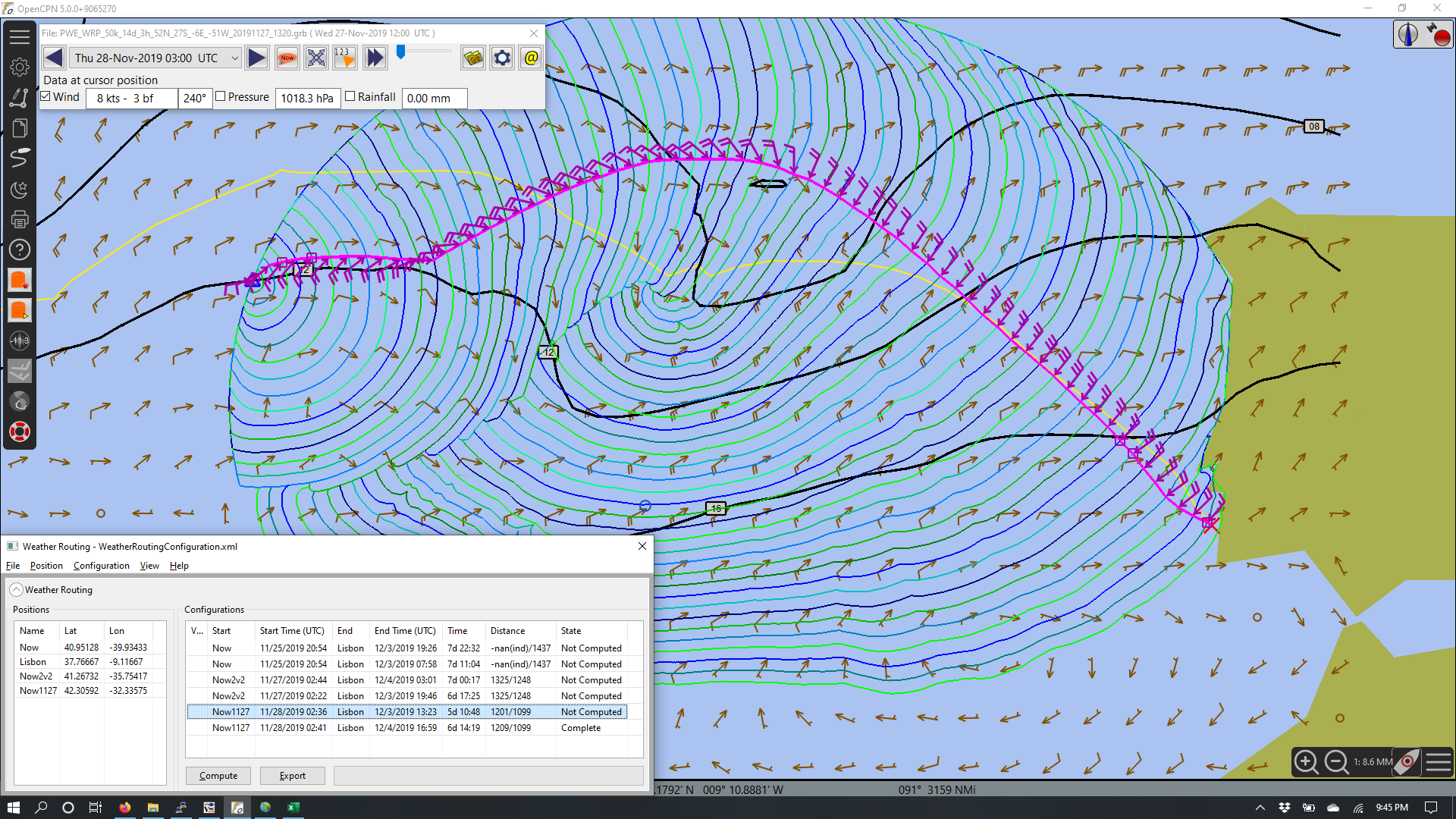 Need to travel north a bit more so that the home stretch will be a reach rather than a beat. The wind speeds for that last leg seem to differ between the GFS and Predict Wind's proprietary ECMWF based model. GFS seems to have much stronger winds in that section, closer to 30 vs low teens for PredictWind. We'll see how that plays out. The overall route is about the same, it adds a couple days of variation in the arrival times. Their current position is pretty much right on where last night's route projected it to be.

By way of comparison between this West-East out-of-season passage and one in a more conventional time - Here is a Windy route for Ryan and Sophie, who are currently en-route between the Canaries and Cape Verde, before heading west to the Caribbean: Windy as forecasted. Looks like a cake walk by comparison - no gale conditions, routing around giant Lows, winds on the nose, etc. Not to take anything away from their passage, which I'm sure has many of its own challenges, but it does show why there are standard times of year and routes to take for these kinds of trips.

Hunter 356 Grand Rivers
They are humming along right on the great circle route. A week ago, I predicted Dec 2 if they didn’t stop in the Azores and that still looks good to me. They are 895 NM away now. This has been an enjoyable thread and I’ve learned a lot - particularly on things about Windy that I didn’t know were in the app.
Likes: jssailem, jon hansen and Davidasailor26 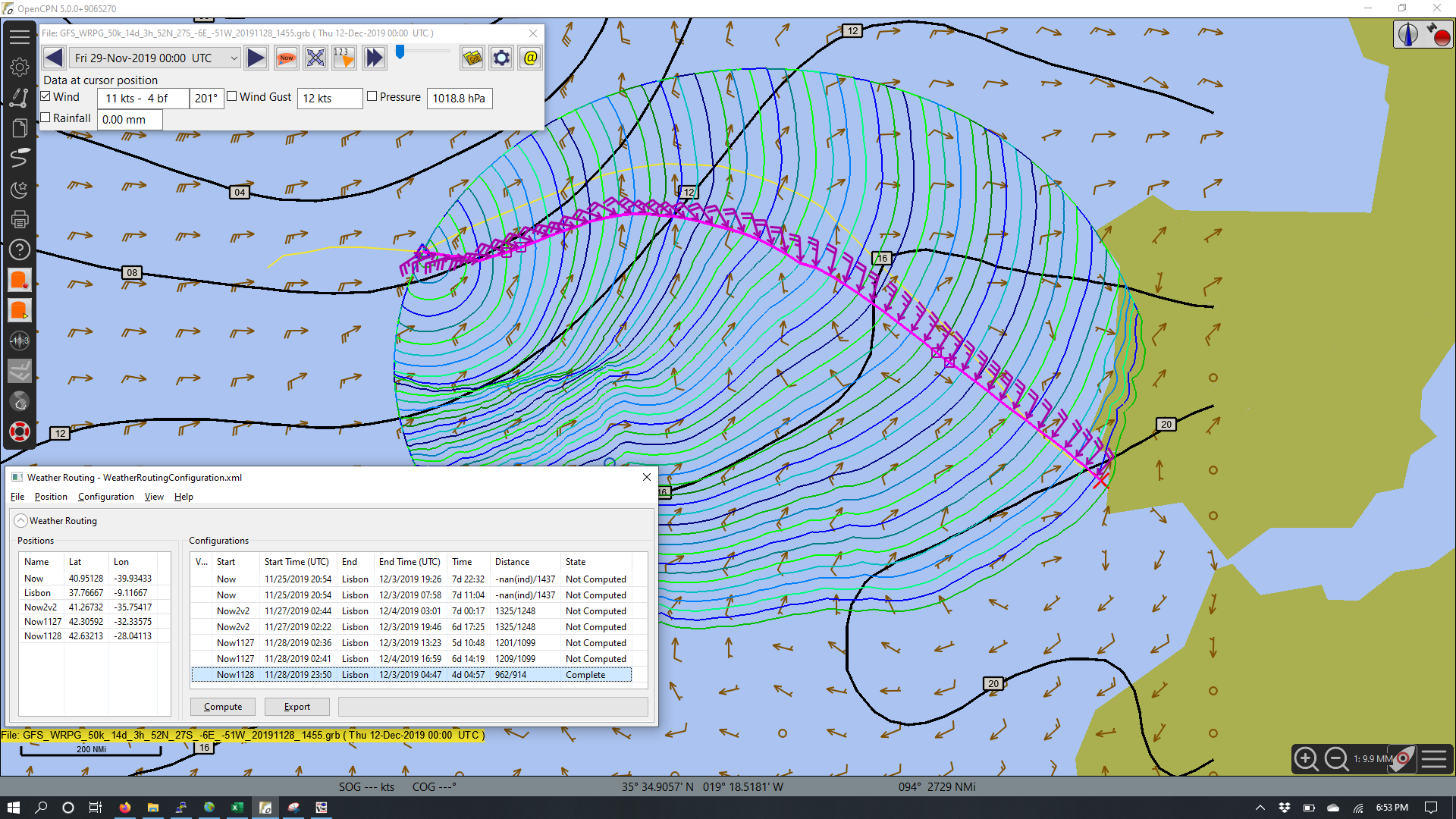 GFS Grib in OpenCPN still has them arriving on the 3rd. The yellow line is last night's prediction, and so far they've been tracking pretty close to that. Tonight's route brings them not quite as far north before reaching home to the south east. GFS still has some exciting winds on that last leg, up to 30 sustained on the beam, so we'll see if they keep their speed up in those conditions.
Likes: jon hansen

Davidasailor26 said:
GFS still has some exciting winds on that last leg, up to 30 sustained on the beam, so we'll see if they keep their speed up in those conditions.
Click to expand

What direction are the currents in that segment? That would make a huge dif in sea state and SOG.
Likes: jon hansen

Davidasailor26 said:
GFS still has some exciting winds on that last leg, up to 30 sustained on the beam, so we'll see if they keep their speed up in those conditions.
Click to expand

Not only the wind on the beam but also the waves. That might be an uncomfortable ride for the last couple of days. I wondered about them venturing so far north of the Great Circle route. I am guessing it was to stay in the breeze and not get caught up in the calm weather that was forecast in the area north of the Azores.

This is always and anxious period for me on my sailings. The excitement of getting close to land.
Likes: jon hansen 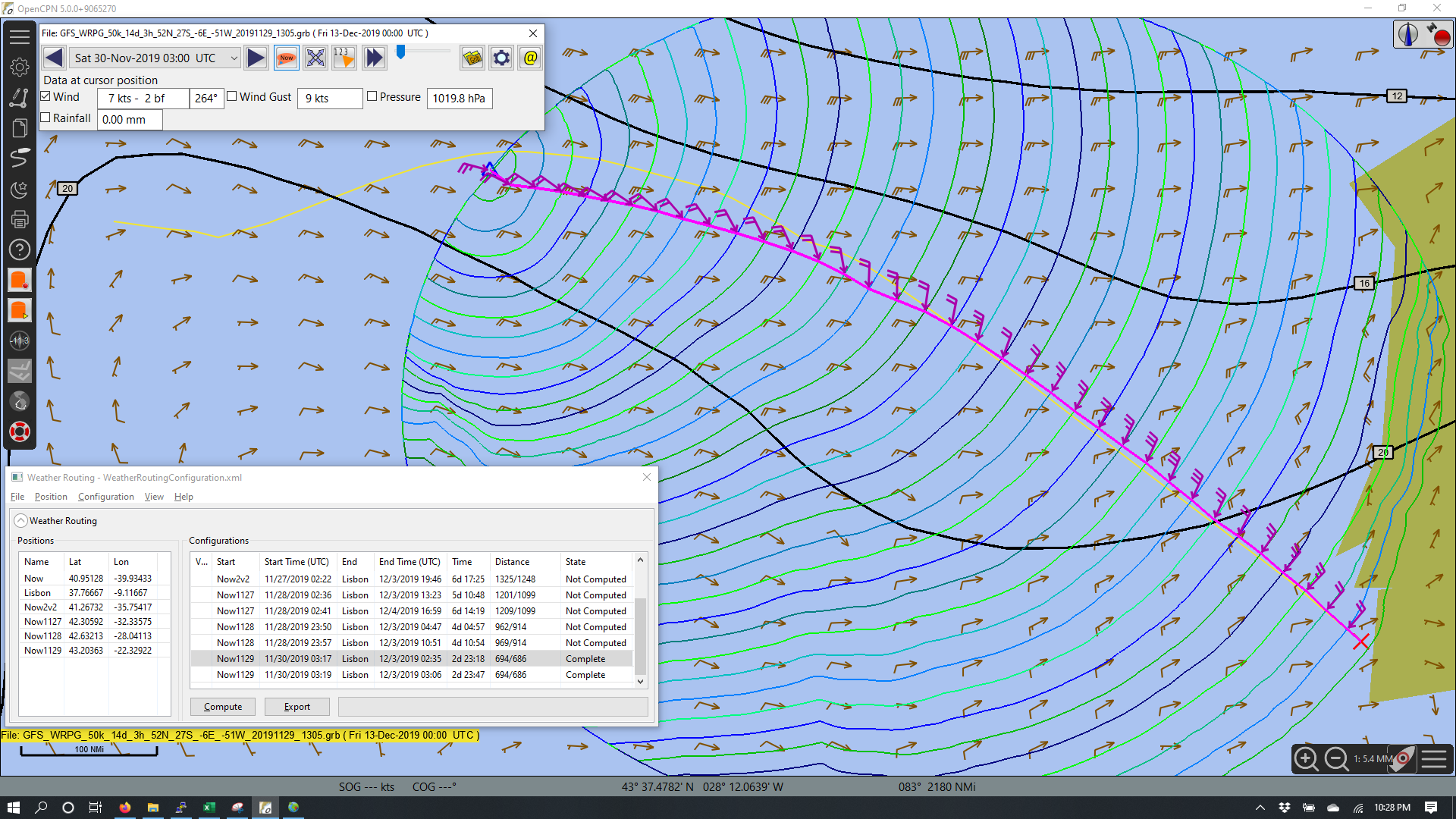 They're just a few miles below last night's predicted route, though they're still heading NNE, compared to tonight's predicted route that starts turning ESE. Less than 700 miles to go. The race now is to get in before light winds set in, maybe sometime late on the 3rd. We'll see how quickly they can reach down in stronger winds before that happens. Certainly seems like they're moving faster now than earlier in the trip, probably as they're gaining confidence, getting closer to safety, and not battling big seas.


Captain Larry-DH said:
What direction are the currents in that segment? That would make a huge dif in sea state and SOG.
Click to expand

Quick Google search doesn't seem to show any significant currents around there; certainly nothing as notable as the Gulf Stream. Some references suggest there might be a slight southbound current, which shouldn't hurt them.

Davidasailor26 said:
I might point out that "Somewhere between Monday and Friday" is all before the 9th.
Click to expand

Their bearing is still heading to France for the last 2 days.

What do I think?
Diesel, Diesel and more Diesel.
Not enough Sun shine to make fresh water, but maybe the have a wind charger.
Jim...

PS: I wonder what levels are in their hold tanks?
Likes: jssailem and jon hansen

Hunter 356 Grand Rivers
As of 11:15 CST, they have averaged 9.46 K over the last 30 hours and I don’t see them slowing down. There is a lull behind them potentially, but I think they can stay with the wind they have. Wind speeds are in the low to mid 20s on a broad to beam reach with mid 30 gusts. Wave forecasts are what they are currently seeing and have for most of the trip. I think they have about 66.75 hours to go +/-, so Lisbon Late on the 2nd CST - early Dec 3 GMT.
Windy shows currents favorable from 0 to .1 k from 290 to 300 for remainder of the trip.
They have managed this crossing exceptionally well.
Likes: jon hansen

Lancer 27PS MCB Camp Pendleton KF6BL
I've never seen so much excitement about one little boat ride from the US to Spain. Why isn't she headed back to Sweden? She should be in school you know. LOL
Likes: DaveJ, JamesG161 and jssailem

CAL 35 Cruiser Portland OR, moored EVERETT WA
I find it a fun exercise to try and calculate a route involving weather and see it played out over time. It is more than a theoretical exercise.

We have explored several passage tools such as Windy, and OpenCPN. If just one boat owner is more aware of the aspects of weather and planning a cruise it is worth it.

Everyone will see the event through their own colored glasses. Time will tell, but I suspect the 16 year old will talk about the experience as proof that her thinking is valid. We need to return to the power of the wind and stop the terrible outcomes from human actions to industrialize the world. After all she can point to the experience as proof.

But is it proof of concept or did she benefit from carbon pollution that provided the means for her to be given an opportunity to ride a million dollar boat across an ocean.
Likes: JamesG161 and jon hansen

Alden 38' Challenger yawl Rockport Harbor
Has anyone seen this short BBC video (60 seconds) as she gets off her last crossing? A kid that never sailed, doing 20-25 knots in huge seas, 300 miles away from Nova Scotia.

Fearless kid. I'd sail to the moon with her onboard. Am I the only Greta fan here? Say it ain't so!

Fearless is a word that comes to mind...

Sabre 28 NH
We were all "fearless" once upon a time
Likes: DaveJ
D

Misfits said:
We were all "fearless" once upon a time
Click to expand

That may well apply to us sailors, but certainly not for the population as a whole. And it seems even less so today....

jssailem said:
I consider her at her words. "I am not a Celebrity." And I interpret this as she is not looking for fans.
She asks at the UN Ecology Conference, "listen to the scientists".

I ask "does that mean only the scientists who she agrees with - That cause her to say "climate change is an "existential crisis".

What concerns me is that the scientists she recognizes state the term "climate change" is the same as "global warming". Should we then ignore the scientists that are exploring the cooling of the planet and are examining the data associated with this change in climate?

Is the science decided? No need to further the exploration!
I am not at that decision yet. I think there is still more to consider before we decide to radically change the economic paradigm of the world. Perhaps a 16 year old knows best. Perhaps not. That does not diminish her voice.
Click to expand

She is earning a living. Not sure her husband/partner has a job.... Somebody has to bring home the bacon...err, or tabouleh as appropriate...

Rick486 said:
Not sure her husband/partner has a job.
Click to expand

As a 16 year old middle school student I'm not sure she has one of those. I understood Mom and Dad are footing the bill except for donated travel expenses.
R

Hunter 44DS Pt. Judith
Isn't this thread about Greta Thunberg? Or is there some other Greta I don't know about?

Lancer 27PS MCB Camp Pendleton KF6BL
It is about her voyage back to the old world. More so about the boat and the crew and how they are using the wind and other factors on how to reach landfall. She just happens to be onboard as extra keel weight.
Likes: Will Gilmore and jssailem