Catalina 309 92 South Haven, mi
My 309 is a 2007. Hull # 92. What is the proper procedure to use this sump? I have seen some posts allude that the valves under the head sink need to be in a particular position. My pump turns on but water flow seems to be blocked.

Hunter 46 Point Richmond, CA
You may find the answer in these threads:

Fellow 310 Sailors, Can't figure out how to make my Shower Sump Pump work properly. Looking for some 411 from anyone with knowledge on this. Y-Valve under galley sink is in "shower" position. But have tried it in "shower" and "refrigerator" positions. Through-hull under the galley sink is...
forums.sailboatowners.com

:(I'm hoping for some help here. My admiral took a shower on the new to us 1996 Catalina 380 Saturday and the shower sump pump besides being way noisy, also seemed to work really slow. Any chance there is a filter somewhere that protects the pump I couldn't find?:( I didn't look too hard as I...
forums.sailboatowners.com

Do you have a schematic diagram of your shower sump pump system, like the one for my boat below, you can follow? 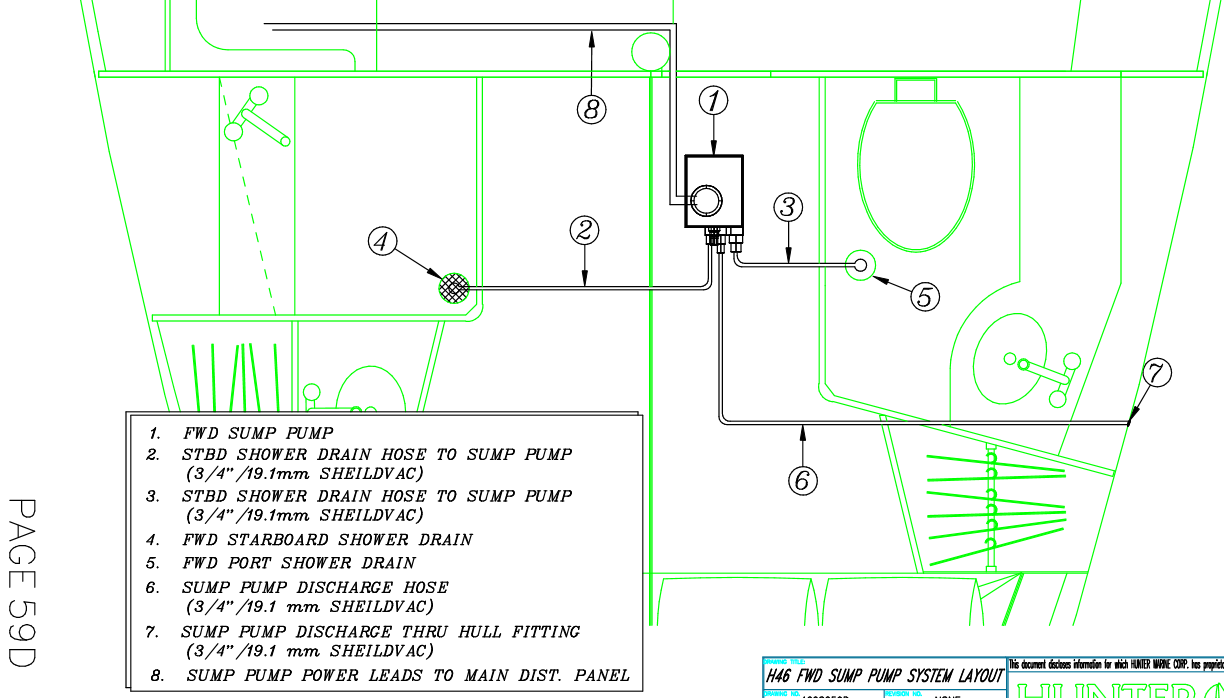 Catalina 309 92 South Haven, mi
I did find my schematics. That, combined with and some other posts on the subject, gives me a few things to investigate next time I'm on board. Thanks for taking the time to help out, much appreciated

Catalina 309 Morro Bay
I also had issues with the shower/icebox drain system. Mainly because my paper work from Catalina did not show this system at all. Also the previous owner had mis-marked the plumbing under the head sink. Make sure the "Y" valve under the head sink is in the proper position, for the shower or the icebox drain. And you need to have the through hull open for the water to discharge. This through hull is under the head sink and may be marked as "Valve A". This through hull is also the intake for the salt water the toilet uses. Water can flow both ways through this valve, depending on if you are using it to bring toilet water in or pumping shower/icebox water out.
Here is a sketch I made showing my system. The arrows show the water flow direction. 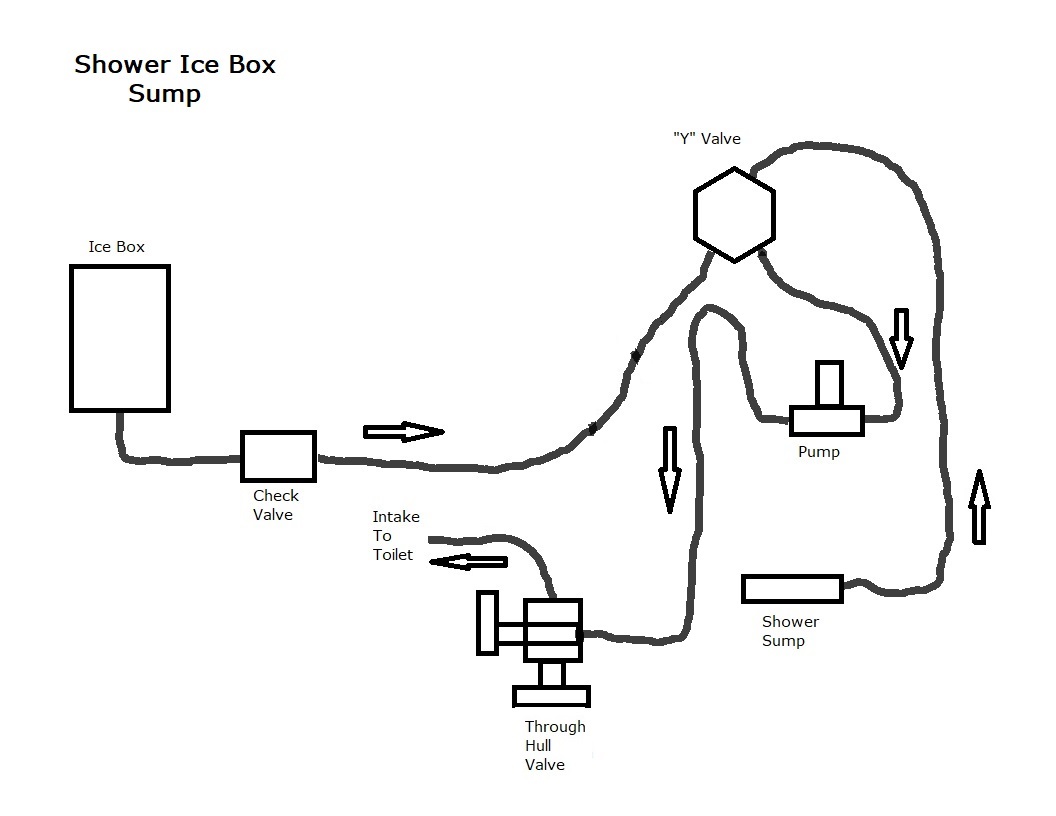 Catalina 309 92 South Haven, mi
Thanks for taking the time to share your information - there was no explanation of any of this in our Catalina manual either. We had issues with the icebox drain as well. I will add your diagram to my manual.
My boat is not scheduled to launch until 5/18 (in MI) so next time I visit the boat I can take another look at your suggestions to see if I can get the proper valve sequence. Thinking that while I'm "on the hard" I could add some water to the icebox. If I get the valves set properly, The icebox water should then drain...??? and the shower sump would then work once I get in the water.
What year is your 309?
Thanks again, the boating community is awesome !

Catalina 310 Scott Creek, VA
For troubleshooting it is easier to put some water in the shower sump. As you reposition the y valve, you will hear the water gurgling in the sump after it is sucked dry, which you won't hear from the icebox unless you have a helper. I had a problem that the sump would drain, but not the fridge. I had previously replaced the y-valve earlier in the season and did not think that was the problem. With the pump on and the valve set correctly, I could put my finger on the fridge outlet and feel some suction, but it was not enough to drain it. Eventually I suspected and replaced the strainer, which must have had an air leak (but not water), and solved my problem. The 310 is plumbed similar but with the through hull under the port lazerette and accessed through a cut out hatch in the head bulkhead.
F

Catalina 309 Morro Bay
My 309 is a 2006, hull number 90. If you put water in the icebox, or the shower, with the valves in the proper positions, they will not "drain". You have to use the pump to get the water out. You can test both the icebox and the shower sump on the hard.
W

Catalina 309 Cornelius
Hi - I recently bought a 2008 C-309 (#142) and have been trying to diagnose a head problem that sounds related to this thread.
When pumping the head out there is often back pressure on the Dry downstroke unless I push on the cam lever harder into the dry setting.
Any suggestions on how to troubleshoot?
I'm not sure if this is related to the valve in the Jasco pump assy, or the Y valve that links the shower sump outlet and head pump inlet.
Does anyone have a sketch of what the three positions for the valve do?

Pearson 37 Lusby MD
Sounds like you have it figured out. The cam isn't quite in the correct position. Has nothing to do with the joker valve.
You must log in or register to reply here.
Share:
Facebook Twitter Email Link
Top Bottom