Oday 25 Washington DC
I have a 1984 O'Day 28 with a Universal M-12 two cylinder 11 HP inboard diesel. I have new batteries and the fuel tank has been scrubbed recently (~18 months ago). I'm having starting issues. Here is what happens...

I hold the glow plug button for 30 seconds then bump the starter button while she is in neutral and throttle set to low-medium level. I can hear the electric fuel pump ticketing and the ignition system goes click once when I hit the start button. The starter never even begins to turn over. I try this with a few seconds between bumps to the starter button and each time I simply get one click. I wait a few minutes and try it again. I repeat this process for about 10- 15 minutes and suddenly the starter roars to life and the motor starts right up. I had the starter and solenoid checked (maybe replaced) a few years ago when this happened and was told they were not the issue. I once had loose connection on the back of the ignition switch and tighten that down to get a better result.

For the last year I've suffered with this issue and each time the motor eventually starts. I motor out, pull up the sails and go sailing. Later in the day on the way back to home port she starts either on the 1st, 2nd or 3rd attempt.

What do you think is my problem? Do I replace the starter and/or solenoid? What would the boat start later in the day but have a much harder time starting the first time of the day? If starter is at fault wouldn't it always we hard to start?
D

Sabre 362 113 Fair Haven, NY
I didn't read the whole article, however, it may provide some ideas on how to address your problem. 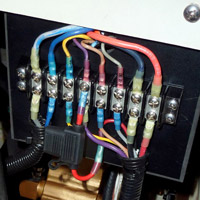 Engine Panel With Ammeter = Dangerous If your Universal engine panel looks like this, and has an ammeter, you are due for some critically important wiring upgrades. The factory wiring, with an ammeter in the panel, is

Tartan 3800 Westport, MA
Starter solenoid. Have you tried jumping the solenoid with a screwdriver or something?
R

Oday 25 Washington DC
I have not tried that. Guess I can and if she cranks right away that I have a solution. wonder though why it starts easier later in the day?

Pearson 530 Admiralty Bay, Bequia SVG
An electrical connection, most likely the ground to the engine block. Take apart every connection in the starting system being sure to check the crimped lugs. I bet one will just fall off in your hand.
Clean all connections of corrosion before reinstalling wires. Rarely, a wire or cable can get a hole in the insulation and the wire inside will corrode most of the way through without being visible outside. If you've done everything else, feel all the wires for a bulge or weak spot and if found, cut and splice back to good wire.

Beneteau 423 Mt. Sinai, NY
Check the engine ground.... And just don't look at it, take it apart. Corrosion gets between the lugs and especially if there is a stack or wires connected at that point..

Catalina 34 224 Maple Bay, BC, Canada
Look under your alternator. There is a fuse there between the start button and the starter solenoid wire. You have a loose or disintegrating fuse holder.

While the guys have general answers, try this specific one first, then theirs.

Oday 28 Great Salt Lake Marina
I have a Universal 5411 in my Oday 28. One day I tried the key and nothing. Jumped it with a screwdriver and it fired right up. Put a ohmeter on the key switch, it's good. Traced the wire all the way back to the solenoid. Found 2 splices, only knew of 1. Ran a new wire from switch to solenoid. Pulled the wire off the solenoid (and it took so much force I bent it) and found it was so corroded it would not make contact. Replaced the end, plugged it in and now it starts every time. Tracing it back from switch to solenoid only took me an entire day.......
O

Oday 28 Madison, CT
I had to replace the starter button on my 85 M12, same boat. May not be the issue here but maybe not overlook either.

Stu Jackson said:
Look under your alternator. There is a fuse there between the start button and the starter solenoid wire. You have a loose or disintegrating fuse holder.

While the guys have general answers, try this specific one first, then theirs.
Click to expand

i agree with Stu. But nobody knows what a prior owner might have done with the wiring. If it is original you should rewire the whole thing as in the link in dlochner's post (that's a must read if you are not already familiar with it). But in the meantime (after making sure your battery ground to the engine is clean), while I was looking for the fuse Stu talks about, if it is original wiring, I wouldn't just replace the fuse and or fuse holder, I would replace the whole wire between the starter and the start button. This sounds what j_schoenfeld did (hopefully it won't take a full day ). The original wire is/was only 16 AWG and as things age it's really too small to carry the current to the starter solenoid.

It's a pretty easy job. Here is the wiring diagram if you don't have it. I'm talking about the yellow/red wire number 3. I would just unhook that one at both ends and replace it with a fused 12 or 10 AWG wire directly between the start switch and the starter solenoid, bypassing the original connector plugs.

Oday 28 Venice, FL
I had similar issues on my 85 ODay 28. Initially the fuse holder mentioned above prevented a start and after that experience, it prompted me to look at things more seriously. Due to its age, I decided to changed out key, 2 push buttons (glow plugs and start), as well as the glow plugs. Took apart and cleaned grounds. Cleaned battery terminals. Replaced the amp meter with a volt meter. I also replaced the starter, alternator and fuel pump. But still, every once in awhile, it wont start first push. (Usually when I don't count out the 30 seconds.) I'll immediately push the glow plug button 5-10 seconds longer, and it has always started. I plan to add a Cole-Hersee glow plug solenoid this Fall and perhaps some wiring after a thorough check. An ACR is also on the list as long as I'm upgrading the electrical system.
R

Oday 28 Venice, FL
Dan, I am away from my computer till Tuesday , so can't give you specifics till then, but the first starter I ordered on eBay or Amazon with the correct description did not fit. A second one was the exact size. Contact me on Tues. The starter is held by two bolts and you'll want to remove the alternator to make room to work.
R

Oday 25 Washington DC
Thanks. The I see it is $79 at Walmart, looks to be the same one that Amazon sells. A reviewer noted the starter is smaller than the original but it bolts in place and works. It matches the 301295 part number from my M-12 manual. When you re-ordered did they acknowledge sending the wrong part or did you order 2nd time from a different supplier?

Dan, the starter solenoid draws probably about 20 amperes to pull in. At that current draw it takes only just a little bit of a poor contact to result in not enough current to pull it in. If you don't eliminate that as a cause you could end up costing yourself some serious money without fixing the problem. Others above have given you good advice, you need to follow it.
E

Oday 28 Venice, FL
Returned the first. But had to pay for shipping. I believe the first was from Amazon and the second from eBay. Both were about $130. I also believe it wasn't a starter issue but as mentioned in my first post for a 1985 boat with original parts, I didn't mine replacing alot of things at the same time.
R

Oday 25 Washington DC
I sent this conversation link to my mechanic as well the link to the Universal wiring article. Scary stuff. I will to see if I have any of the dreaded trailer connectors and replace them. I don’t think i have them. My panel has a Tach and a temperature gauge that I replaced. At least jumping between the alternator and the starter seems easy to do. The start is so inexpensive and looks east to install and my appears very old (probably original making it 36 years old) I‘ll replace it anyway. Thanks for all the advice
R

envisionvenicefl said:
Returned the first. But had to pay for shipping. I believe the first was from Amazon and the second from eBay. Both were about $130. I also believe it wasn't a starter issue but as mentioned in my first post for a 1985 boat with original parts, I didn't mine replacing alot of things at the same time.
Click to expand

The one I’m looking at is
About This Item
We aim to show you accurate product information. Manufacturers, suppliers and others provide what you see here, and we have not verified it. See our disclaimer