Hunter 30 (1978) Milwaukee, WI
I'm not a diesel engine expert at all and I'm having an issue with getting the engine started since the last time the boat was out last week. It was working fine until we were returning to the dock and, after reducing throttle, it died (fortunately we had enough momentum to coast the rest of the way). When starting, the gear is in neutral and the throttle is in the middle somewhere. I have tried giving it a little more throttle when starting to see if that makes a difference but that hasn't changed the result. I have also closed the raw water intake to hopefully not fill up the exhaust with water. Here is what it sounds like:
Based on the information I have found so far, it seemed likely that this was a fuel problem so I started looking for a manual pump to bleed the system. As it turns out, this engine seems to have an electric fuel pump and when I turn the key for the ignition into the 'on' position, I can hear the electric fuel pump making a sort of clicking sound. Will the electric fuel pump stop when the system is sufficiently primed or will it continue just keep running as long as the ignition is set to 'on'? Is it possible to 'over prime' the engine? I left the key in the 'on' position for at least 5-10 minutes. It is possible I did not let the electric fuel pump run long enough?

To bleed air that might be in the fuel line, I loosened a screw on the top of the fuel filter that is mounted on the engine while the electric fuel pump was running. After I got a steady stream of diesel, I tightened it. From that fuel filter, the fuel lines seem to run to 2 locations on the engine. Are these the correct places to unscrew to bleed the fuel? (see images named 'steps removed looking closer' 1 and 2) I tried unscrewing the first one but it just seemed like I was stripping the screw. Would a wrench work better? On the right side of the 'steps removed access' photo, you can see the fuel filter on which I was able to unscrew the bleed screw. In the bottom left of the 'port aft berth access' photo, you can see the orange fuel filter which leads to the electric fuel pump (mounted on the left (port) side of the engine) and then it leads to the fuel filter that is mounted on the engine. Would it be worth trying to get these fuel filters apart to see if anything is going on in there? Do I need to fill them with diesel when I put them back together?

Any ideas are appreciated. Thanks!

Hunter 310 West Vancouver, B.C.
Start with the easy stuff first. You may be suffering from one of these: 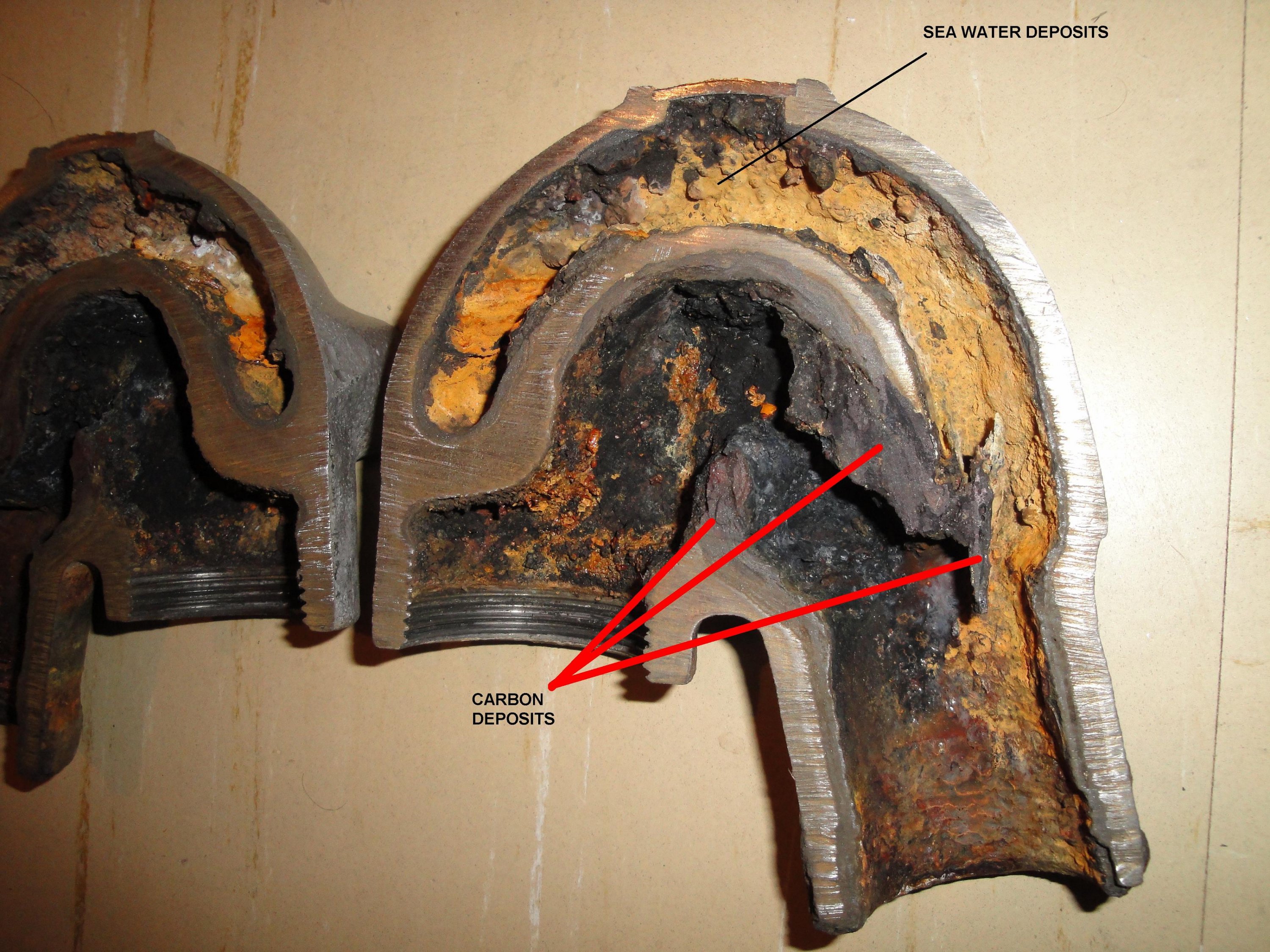 CC 30 South Florida
So the engine was running fine as early as last week and all of a sudden it died after reducing throttle. It sounds to me like fuel starvation. I would first check that the vent in the fuel tank is unobstructed. I would replace the fuel filters, the primary water separator and the secondary filter at the engine. You may separate the fuel line coming from the tank to the water separator and blow air back through it until you can hear bubbling inside the tank. This would serve to clear any obstruction to fuel flow in the screen for the pick up tube. After replacing the filter elements you will likely need to bleed air out of the lines. Repeat the procedure by working the bleed screw on the secondary filter casing until you get a clear stream of fuel, not familiar with the YSB12 but there should be another bleed screw by the high pressure fuel pump leading to the injector. If unable to do so just loosen the fuel line going to the injector and operate the electric fuel pump until fuel starts leaking from the line and then tighten. That should prime the high pressure pump and allow for a short rough start until any remaining air is pushed out. You may also remove the air cleaner and make sure the intake tube is clear of any obstruction to the air flow. Finally check the fuel level and when draining the water separator gauge the amount of water in the fuel. (highly contaminated fuel with water does not smell quite like diesel fuel but more like water. If the engine was running fine before it died then you could really downplay at this time the possibility of a fouled mixing elbow, or low engine compression. After you get it running check for fuel leaks along the lines and connectors; "fuel out, air in". If after replacing filters and insuring unobstructed fuel and air flow and bleeding the air out of the lines the engine still does not start then you would be looking at a mechanical issue with compression, injectors or governor.

Beneteau Oceanis 37 LE Havre de Grace
The electric pump should continue whenever the key is on. How quickly does it click? Sometimes the electric pumps have a built in screen filter which can get clogged and prevent sufficient flow from getting to the rest of the engine. It should probably click once per second or so. If it's only clicking about once every 5 seconds then that screen could be the issue.

Catalina 36 MK1 94 Everett, WA
I haven't hand cranked a marine diesel since I was in jr hi. I thought most engines turn clockwise when looking at the dampener. And his fuel pump should be after the filter not before.

Davidasailor26 said:
The electric pump should continue whenever the key is on. How quickly does it click? Sometimes the electric pumps have a built in screen filter which can get clogged and prevent sufficient flow from getting to the rest of the engine. It should probably click once per second or so. If it's only clicking about once every 5 seconds then that screen could be the issue.
Click to expand

That filter screen is absolutely where I would start. Could be a sludge build up. Stupid question, but no one shut or partially closed the fuel cock top of tank, right?

LeslieTroyer said:
I haven't hand cranked a marine diesel since I was in jr hi. I thought most engines turn clockwise when looking at the dampener. And his fuel pump should be after the filter not before.
Click to expand

The pump should be after, but not all manufacturers did what they should. I know ODay put the pump before the filters.

Hunter 1978 H30 Cherubini Treman Marina, Ithaca, NY
We once had the YSB12 die mid lake on a windless return to the slip. The first thing I checked was the possibility of water in the fuel line. I started with the bleed nut on the bottom of the fuel filter, we only have one filter/separator and was able to relieve about 4 ounces of water from the filter base. Having done that there was no need to bleed the system, as I only had drained off some water. With fresh batteries and a good charge it took a little while to crank the starter until the engine fired up. Once back in the slip the filter was isolated, cleaned out, new element, and refill with fresh diesel. No additional priming necessary. The engine has been well since that stall point last season.

Hunter 30 (1978) Milwaukee, WI
Got it running yesterday! Thanks for all the suggestions. I'm not sure that I will label it a success yet since all I really did was bleed the fuel, mess with the fuel filter, and be persistent with holding the key in the start position. It did start consistently the next couple times I tried it though, so I'm optimistic.

I made one kind of bonehead mistake though: when I was checking the engine after it had been running, I decided to tighten the bleed screw a little more, just to make sure it was nice and snug, and the screw actually broke. Fortunately, I was able to get the other part of the screw out and it was a lesson learned because now I have to wait for my replacement internet order to show up in the mail!

Davidasailor26, The fuel pump clicks more than once a second. I can take a video of that if you want to hear what it sounds like.

Odaydokay, from what I can tell, I do not see a shut off on the fuel tank, which could be an issue if I need to get into the first fuel filter and there is no way to turn off the fuel. I will have to look into that further.
Likes: justsomeguy

ripperbone said:
Davidasailor26, The fuel pump clicks more than once a second. I can take a video of that if you want to hear what it sounds like.
Click to expand

That's good. That combined with the fact that the engine is now running means the screen in the pump probably wasn't the problem.
B

- -- -Bayfield
Usually there are three things that affect the fuel when it contributes to hard starting. Either there is an air leak in the system in which case you must bleed the fuel line sequentially (which it sounds like you did), or there is contamination in the fuel (need to change the filters periodically), or there is water in the fuel. Water can get in due to condensation and that is why it is good to fill the fuel tank up at the end of the season if you live somewhere where you store the boat over the winter. Or if the fuel fill deck plate has a bad rubber gasket, rain water or, depending on it's location, wash water from a hose when cleaning the deck can end up in the tank. If you are in a warm weather climate, additives like Bio-Bor keep the fuel in good condition while it sits and eliminates organism growth. If the three things above are ruled out, then it could be glow plugs. Either they are bad and need to be replaced, or you are not activating them when you start the engine. If that is not the problem then you can start looking at exhaust elbows, etc. as mentioned above.
You must log in or register to reply here.
Share:
Facebook Twitter Email Link
Top Bottom