Pearson 303 Elisabeth Middle River, MD
Just bought a 1986 Pearson 303 and the shifter works in reverse. Pushing lever forward is reverse, and pulling backward shifts into forward. Is the problem in the pedestal where the cable attaches to the shifter, or is the problem at the lever on the transmission? Any help would be appreciated. Thanks.

Catalina 270 Wabamun - on the orange ball
The controls on the pedestal may have been upgraded and the action of the shifter reversed as a result (don't ask me how I know this) If you look at the bellcrank on the transmission, you may see that the thing has to work in the opposite direction, and that may, or may not be easy to do. I had to craft a whole new bellcrank to make mine work, but the mounts for the cable end need to be there, or you'll have to craft all of that too. The action needs to be EXACT to what's there now. You can't be off by 1/8" or the transmission will not work properly
B

CC 30 South Florida
I remember the first time I rode a British Motorcycle; had to relearn the shift and brake thingy. After Meriachee good explanation I understand why the PO may have elected to learn how to use it as is.

Catalina 270 Wabamun - on the orange ball
I hated the original Edson shift arm, ordered the upgrade kit, and then after installation figured out the operation was "backwards".
It took a year to craft the swap, which at the end of the day was actually really easy, but then I have small metal working tools.
The first time I put the boat into a slip, I almost put the boat INTO the slip, as I forgot monetarily that forward really is forward. Oops.
No harm, no foul. Won't make that mistake again....

Beneteau First 38 Lyall Harbour Saturna Island
There was another one of those on a previous thread where the P.O. Put a left hand prop on the boat and reversed the crank. Tranny was in reverse as he motored in forward. As Art Linkletter said “People are Funny”
R

Pearson 303 Elisabeth Middle River, MD
Thanks for the responses. I haven't opened the pedestal yet to see if the shifter can be reversed there, or if a bracket will have to be fabricated. Reading through the Yanmar Operation Manual that can with the boat, it says it came with a one-lever control and a two-level control will not work with a 2GM20F. See attached photo. 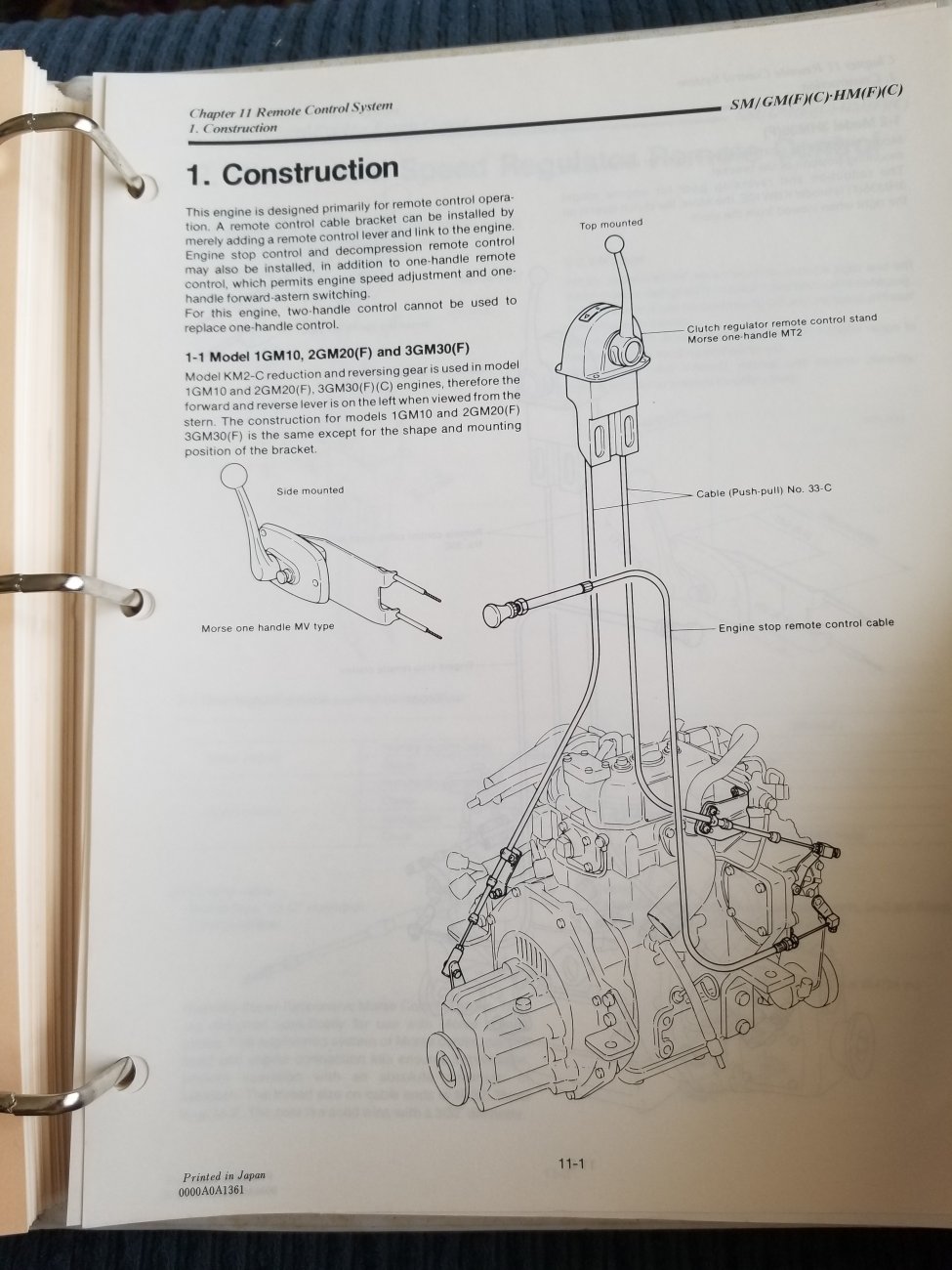 Pearson 303 Elisabeth Middle River, MD
Here is a pic of the shift bracket on mine that results in things being reversed. I have seen pics with a bracket mounted at the lever on the transmission where someone fabricated another piece to attach to it so the cable would come from behind. 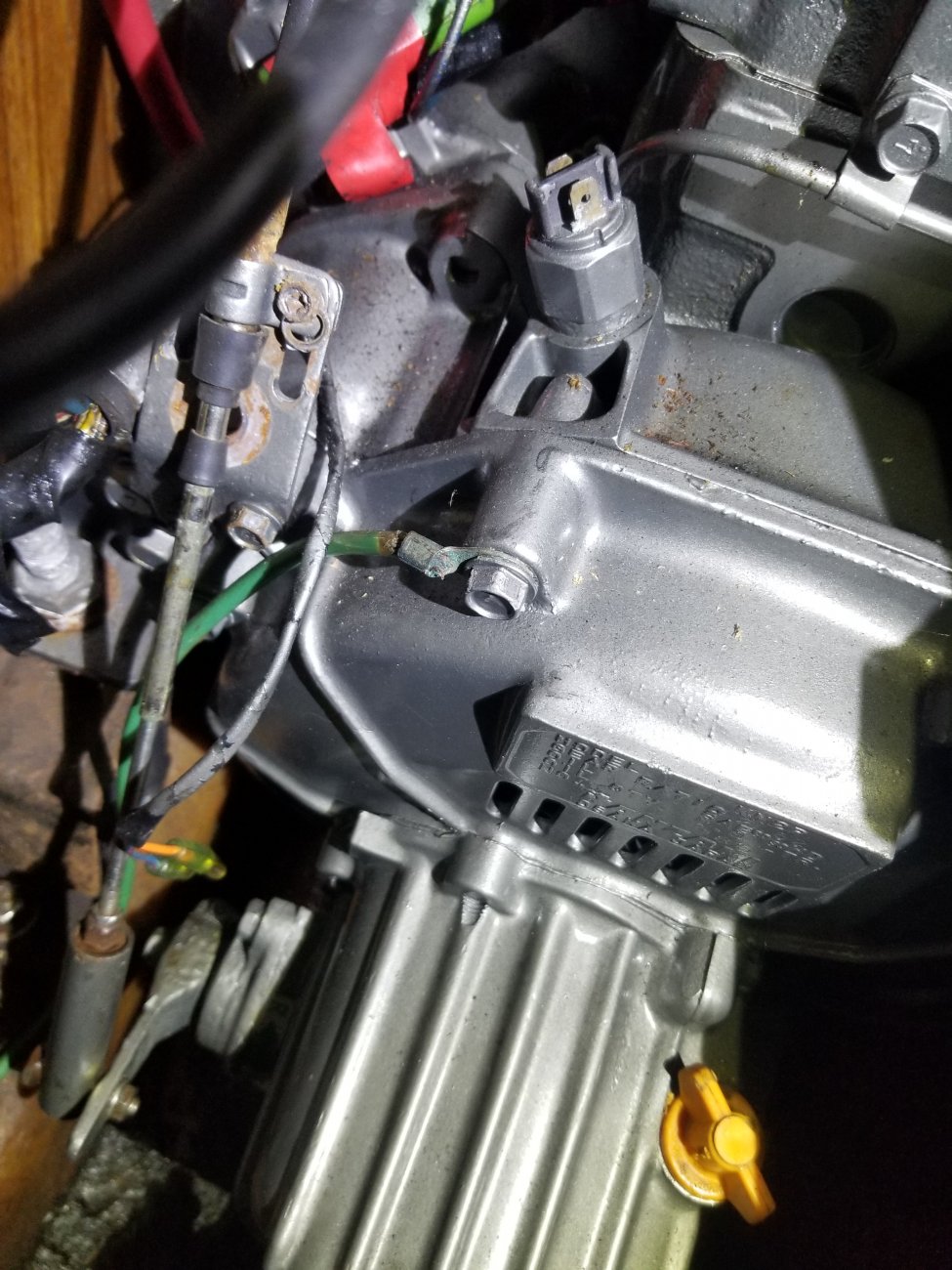 Pearson 303 Elisabeth Middle River, MD
The painted bracket looks like it is a Yanmar part, while the unpainted is the modification. Am I correct, or are they both fabricated? 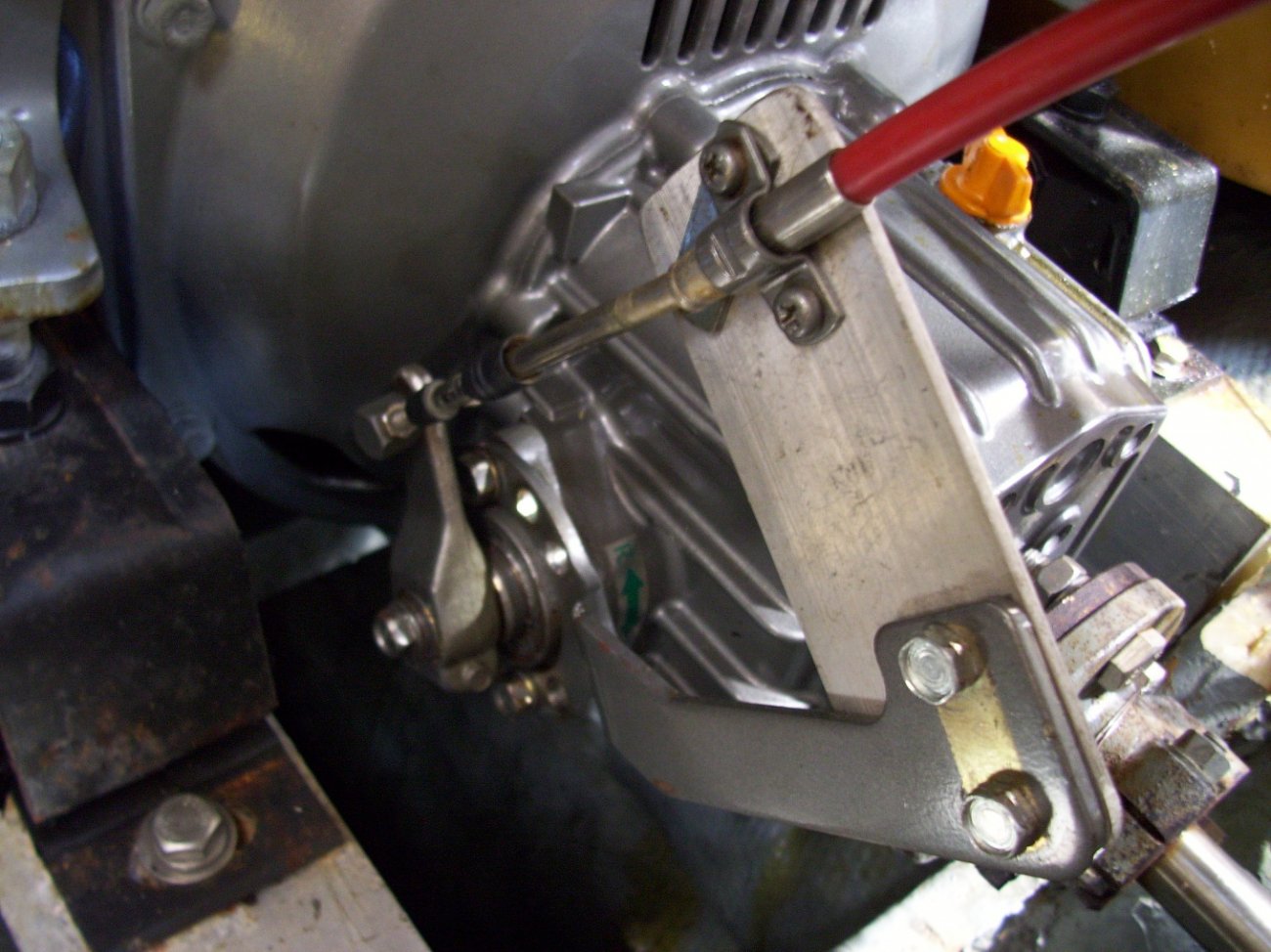 It doesn't seem to make sense, but when I saw how the shift bracket functioned on the bell housing, I could see how the intended solution actually worked!

However, when I got my re-built tranny, with the shift bracket installed correctly, as shown in the installation manual, the cable was still backward in the pedestal. I had to get used to pulling back for forward and pushing the lever forward for reverse. I was told that they couldn't change the cable in the pedestal. Oh well, I just got used to it.

BTW, when I installed the new Yanmar 2YM15, the result is the same. I'm still pulling the lever back for forward. The shift and throttle levers and cables are the only components that I didn't change out with the new installation. I guess it is 2nd nature to me now. Also, the yard guys don't seem to find it weird at all. It seems that they have seen this before.

Hunter 33 Steamboat Wharf, Hull, MA
If possible and if your budget allows, convert to a single lever control. Such is foolproof. Push forward to go forward, push further, go faster. Pull back to center, neutral and idle, pull back further to reverse, further back faster. If you stay with what you have, you will always be confused, especially in a panic situation. This confusion will last long after you have changed boats. Ask me how I know this.

Catalina 270 Wabamun - on the orange ball
Changing this to a single lever may require changing out the pedestal. The interior mounts may be an issue.

Pearson P303 #221 RockPort Maine
It Looks picture one is correct to install for that shifting device. However, I believe on the inside of shifter cam of the shifter cam can be reversed or flipped over. The Yanmar brackets the same as mine but I have 2 controls 1 for shift 1 for fuel. Not sure though. to see if you can go look at the control head of you pedestal like the picture you see right below If it's like this then you can change out shifting cable and fuel cable to have two leavers.

Hunter 33 Steamboat Wharf, Hull, MA
Some Yanmar engines have an adaptor part available to reverse the cable operation. It is in the parts manual as an option. It looks like a shaft that sticks out from the back of the transmission and has a bracket to hold the shifter cable.

Catalina 270 Wabamun - on the orange ball

StargazerP303 said:
It Looks picture one is correct to install for that shifting device.
Click to expand

There is a whole upgrade kit for the Edson pedestal. I did it, and it does not offer any way to change the bellcrank at that end.

jmce1587 said:
Tally Ho - Greg, what is your wheel wrapped with? Looks good
Click to expand

I didn’t do it, but if looks like it was wrapped with string (and with a raised piece about every inch), and then varnished or epoxied.

It seems to be holding up OK (my 5th season with her).

Pearson 303 Elisabeth Middle River, MD
I think the bracket that attaches to the shifter so the cable comes from the rear is what I will need. Do you happen to have a part number? I can't find a parts catalog with it listed.


RoyS said:
Some Yanmar engines have an adaptor part available to reverse the cable operation. It is in the parts manual as an option. It looks like a shaft that sticks out from the back of the transmission and has a bracket to hold the shifter cable.
Click to expand

Hunter 33 Steamboat Wharf, Hull, MA
RKirk, My Yanmar is a 1979 2QM15 and the Parts Manual has the transmission bracket as an option. Attached here are photos that hopefully show the part numbers that you need.