WINDOW REPLACING AND WHICH SEALER

Hello Below said:
Hayden, I have to replace all my fixed frameless ports. I was surprised when you mentioned a 2 week plus curing time. But confirmed it on the product spec sheet. If I may ask, what was the thickness of the of your acrylic and ball park figure for the acrylic Thanks.
Click to expand

I checked the spec on the 795 before I bought it because there were several negative reviews that said it did not cure. two of them found it still soft the day after installation and removed it and went with household silicone. A couple of others reported soft the next day but then after a week said that it did eventually cure. In otherwords they were complaining that it did exactly what it said it would do!
We installed and plan to not do anything with the boat for at least a week. We did get rain then night that we installed but the spec states that it is cured by atmospheric moisture and rain will not harm it during cure.
For my C30 it took one sheet of 1/4" x 37" x 32" which I cut into the four lenses from Tap plastics for $123.33 plus shipping. I cut it with my bandsaw and used the old lenses as templates and a combination flush cut bit and 45º bevel bit in my router to get it to shape. I used new bits and got very clean cuts.
Likes: Hello Below

Hello Below said:
If I may ask, what was the thickness of the of your acrylic and ball park figure for the acrylic Thanks.
Click to expand

It's not the thickness of the 795 that counts but the width of the deposit of 795. Moisture from the air does not penetrate through the acrylic (on top) or the fiberglass lip (below). The water vapour enters along both edges of the joint and proceeds through the width to the middle to fully cure the sealant.

I have no idea how many years this hatchlight took to cure: 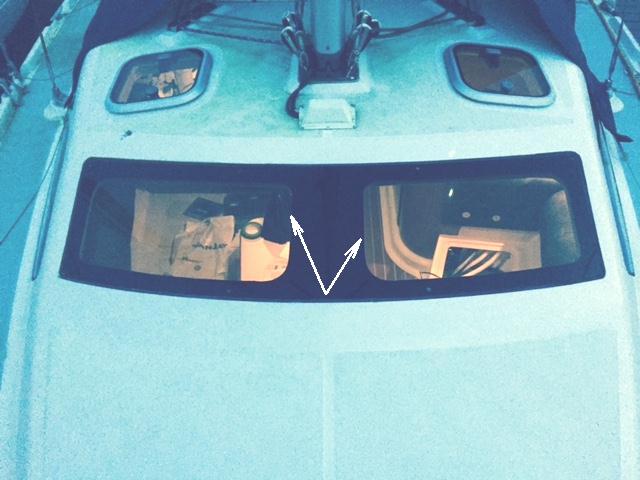 The narrow borders are about 2" wide. This must be like a 2" thick bead of 795 curing. There are about eight black headed screws around the perimeter which were used to hold the whole thing together for many months before it was set. Screws were left in and it's impossible to see them until your nose is on them.
Likes: Hello Below

Catalina '88 C30 tr/bs Oak Harbor, WA
That is why I like the VHB tape. It holds the lens in place so that the silicone has the time to cure.
You must log in or register to reply here.
Share:
Email Link
Top Bottom