former Tartan 30 New London, CT area
A favorite recipe on my boats has been sort of a stew/chili. Need a can of Dinty Moore (smallish) and about the same size can of red kidney beans. Start with a saute of diced onions in olive oil, adding some minced/sliced garlic as it finishes. The smell of this alone will have the crew ready to eat the drop slides. Add the DM and the kidney beans and heat. Add chili powder to taste. If you have a smaller crew/big enough pan, you can scoop out some hollows and poach some eggs in place. Tough to do in a pot.
Cooking for more than 4 is tough as you need bigger pots and pans.
Likes: jssailem, dirt rd and Will Gilmore

DArcy said:
and saw the Sharks
Click to expand

Memories - a Shark was my first fixed keel boat. (Prior boat was a West Wight Potter 15.) Owned the Shark from 80-88.
Likes: jssailem and DArcy

Beneteau First 38 Lyall Harbour Saturna Island
Now that the cold ,wet days of winter are upon us we can relax and remember

Quiet walks on the beach
Likes: dLj, Will Gilmore, Phil and 7 others

Oday 322 East Chicago, IN
These are from my annual overnight on the south end of Lake Michiga....

Gonna be a long hard winter :-( 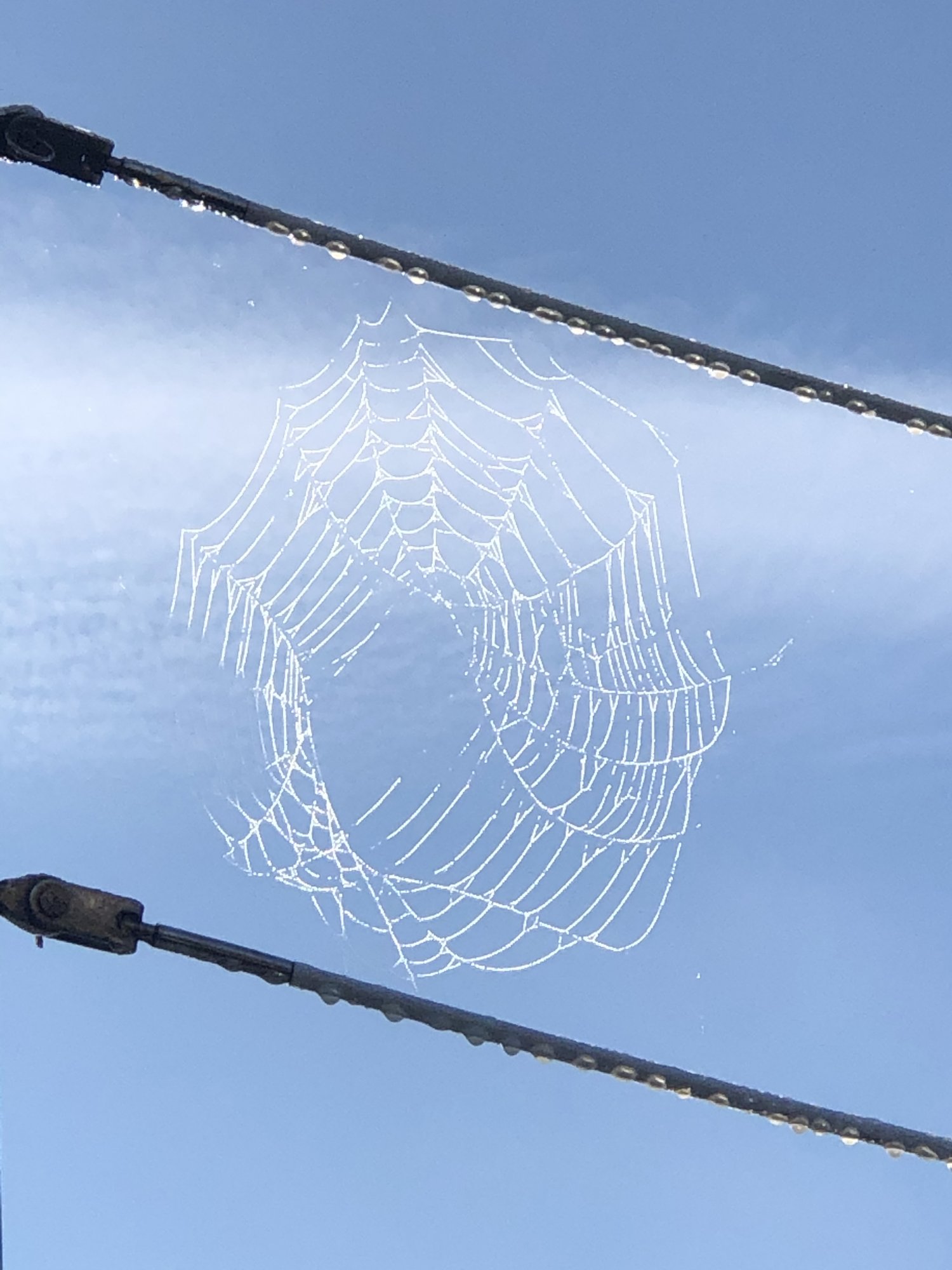 Beneteau First 38 Lyall Harbour Saturna Island
It’s amazing how they get aboard. We can be out for two or three months and still get spider webs on the life lines and the Bimini supports. I think they have secret access to the Enterprises transporter room.
Likes: Captain Larry-DH, sailme88 and jssailem

BlowMeAway said:
I’ve rarely met an individual that has the competence and composure to be an incredible skipper, but I have to share a story about true integrity. My Pal on Cayuga Lake bought and commissioned, what I believe to be, the largest sailboat on Cayuga. It’s a Tartan 41, that he had shipped overland from Sandusky, Ohio to Ithaca, NY. It took over 5 weeks, from the time of purchase, to get it splashed and have the mast stepped. Power lines in the south end of the lake where the obstacle resides, since his mast is 60+ ft tall. After contracting with an industrial crane company, the weather and location for stepping were his biggest delays. Couldn’t launch from the south channel, where most sailboats are splashed.

I’ve known @Mohawk Jack for a couple years now, since we both have Hunter 30’s, of the same Cherubini design (1978-1979) and share similar pier end slips in the Treman Marina.

I was simply asked as a friend to help with the running rigging. I had no idea if we would be successful in one day, as I surveyed the deck, to figure out the multiple halyards, blocks, cleats, fairleads, cam cleats, whisker poles, spinaker attachments, Etc. Jack just wanted to get his new boat out in the decent wind that day. Well, we had to winch Jack up the mast to reroute a few lines that were trapped between spreader, shrouds and front stay, ignored by the crane.stepping crew, but no big deal. After several hours we at least had the basic running rigging established and logically placed. This was a major team event with various opinions offered.

As it turns out our assumptions and line placements worked out. Here’s the result on Cayuga during a 3 hour outing with Jack and his wife In 15 Kts of wind.
View attachment 185676
Click to expand

Thanks buddy, we could not have done this without you. This was truly a team effort and all hands on deck necessary to get underway that day. Can't wait to get out on the water again in the spring.
-Jack
S/V Rumb Line
Tartan T41
Likes: SFS

Here's a view from a recent hike in the Marin Headlands. 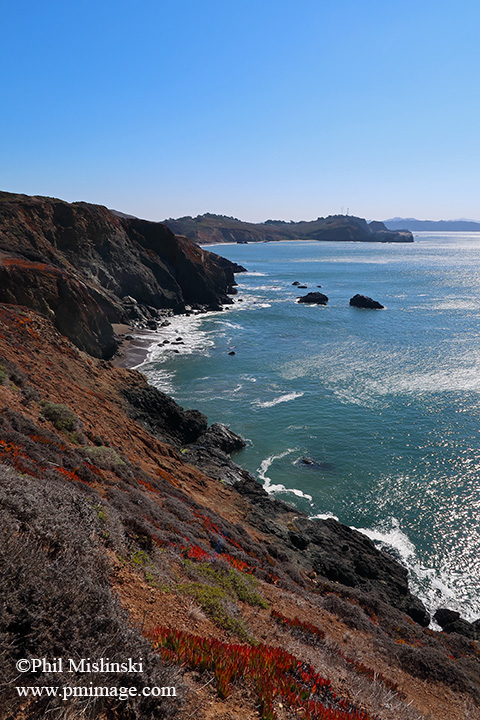 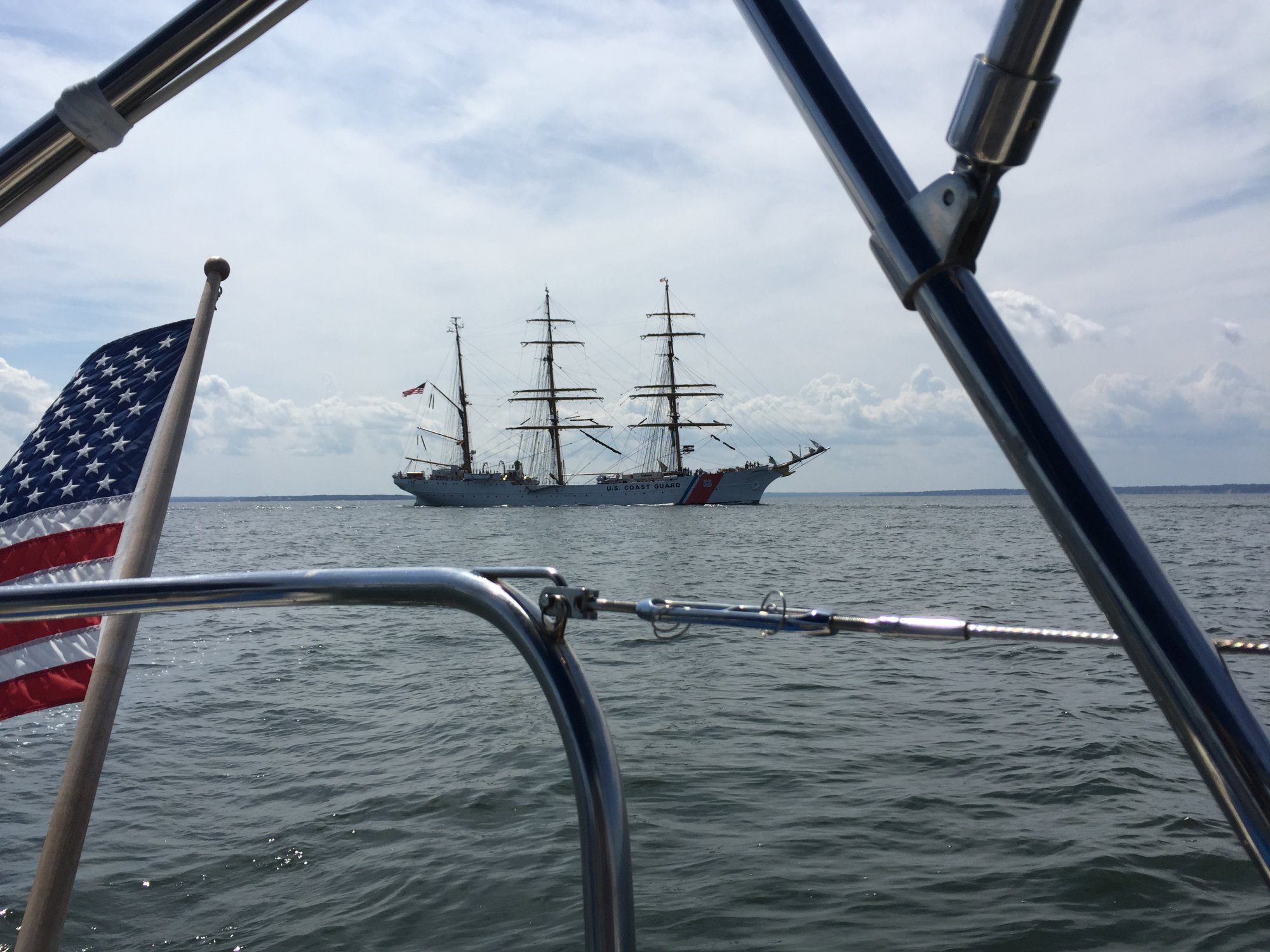 Pearson 37 Lusby MD
That is, in fact, the Eagle off the mouth of the Patuxent River.
Likes: jssailem

Catalina 34 Casco Bay
Motoring home in a dead calm after cruising to an island restaurant... 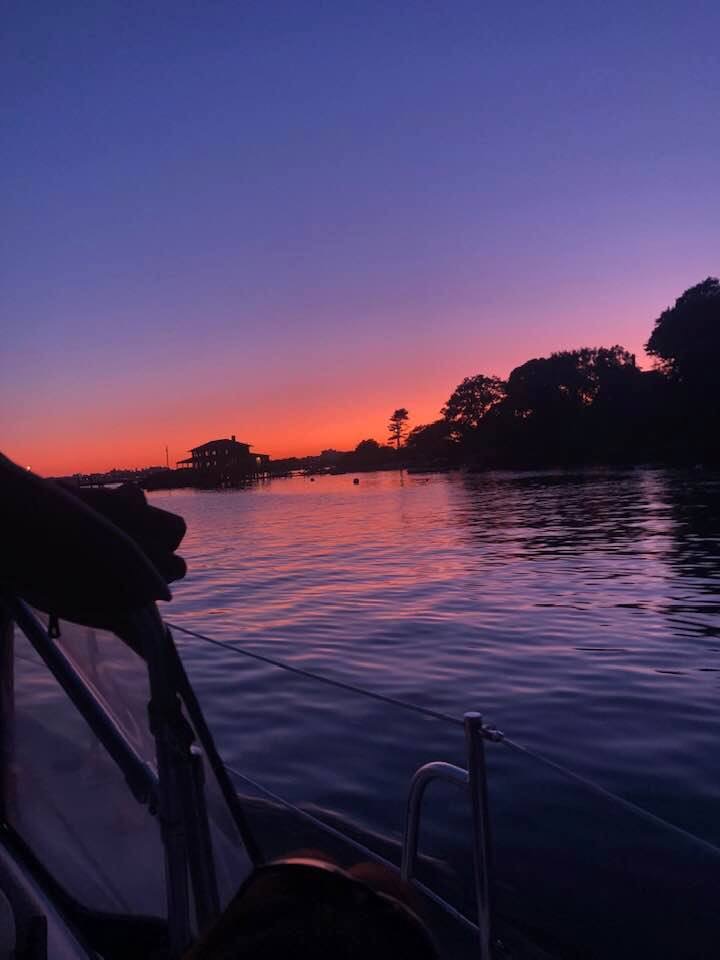 john alden caravelle 42 sturgeon bay, wis
OK, i have an eagle story.
Dad was a friend of a guy that was pres of the big shipyard that was in toledo. when he was fresh out of collage he worked at geneal dynamics in new london on the thames river.
we stole the eagle from the germans during WW2 and now it was just after the war. we wanted to use the boat for training, as the germans had used it. BUT, no one knew how to captain such a vessel. senior captains do not take on jobs that might make then look foolish.
so we went searching, found the previous german 1st mate and he was willing to be the first captain, now under the american flag.
the ship, full of cadets, went on it's first 3 month summer cruise. upon returning to it's home base, the captain called in to harbor command in new london and said, "we are sailing the ship up the river to it's docks. tell those subs to stay clear, tell other traffic to be aware" the command asked if their engine did not work, if they need assistance. the captain responded that the engine worked fine, that the ship need no help. he then said that he was hired to train the americans how to sail a sailing vessel properly. then reaffirmed that they would be sailing up the river to it's wharf.
they heard this at general dynamics too. a large crowd developed along the river as the eagle sailed up the river under full sail. just before the wharf area, one command was given to the entire crew that was on station in the rigging. all sails were rolled in at once. the eagle then was gliding up river. once the bow was abreast the wharf the port anchor was deployed and the wheel was put over hard left. the eagle spun a 180 around the anchor and eased against it's wharf when the mooring lines were easily placed to the dock. no bow thrusters needed. no tugs. no engine. just skills of another era.
what fun.
Likes: smokey73, jssailem, dirt rd and 4 others

CAL 35 Cruiser moored EVERETT WA
@sailme88 that is a beautiful image. The capture of colors right through purple to black. superb!.
But for the good of my eyes, photoshop it and level the horizon, please.
Likes: jon hansen

jssailem said:
@sailme88 that is a beautiful image. The capture of colors right through purple to black. superb!.
But for the good of my eyes, photoshop it and level the horizon, please.
Click to expand

Believe it is level.. The foreground island's shore is basically level. The orange of the sunset shows the curvature of the earth..
Likes: jssailem

sailme88 said:
Believe it is level.. The foreground island's shore is basically level. The orange of the sunset shows the curvature of the earth..
Click to expand

Then that house was built severely out of plumb. Great shot! That's not on Southport Island from the passage off Boothbay?
Likes: Captain Larry-DH

Alden 38' Challenger yawl Rockport Harbor
I don't know the design of this interesting sailing skiff. Some have said it looks to Irish lines.

I was amazed when they launched it from a schooner that they slipped on a topmast and topsl'.

Lightish air at dusk, it had plenty of power with this sprit rig. 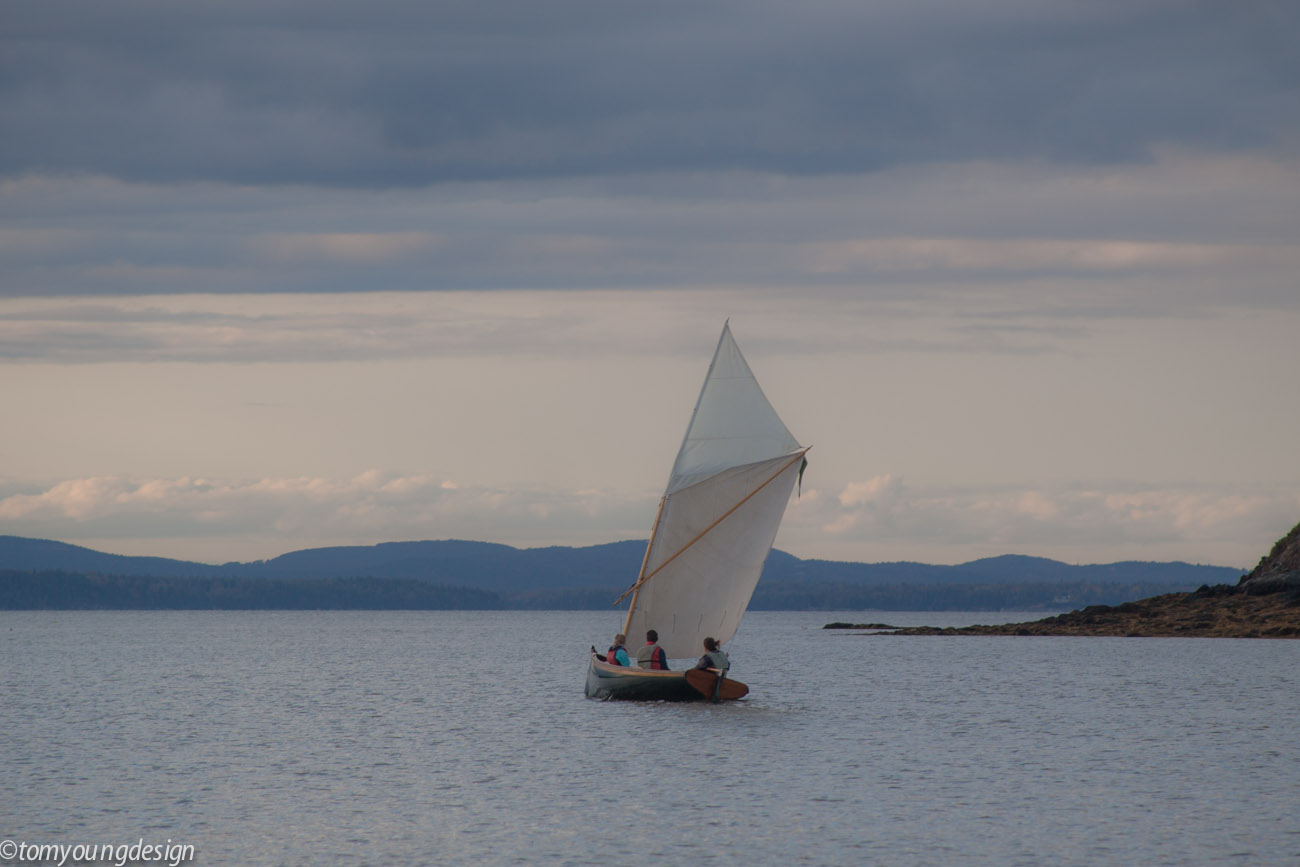