Scott T-Bird said:
Well, I did order a few gauges so that I can get some numbers as well.
Click to expand

Scott T-Bird said:
Who knows, perhaps if Catalina simply increased the pipe size marginally on the suction side, these pumps would last forever. It's not like they are working hard at all, yet still they seem to have a limited service life.
Click to expand

Catalina 320 Barnegat, NJ
Well, I took my pump apart to examine it and sure enough there is a pressure adjustment! It's the center screw in the picture below. I loosened that screw before I was aware of what it was. I'm thinking that it was set pretty low and could easily have been the reason for lousy pressure. I set up my test kit and when I first pressurized the line it had low pressure at about 22 psi before it kicked on. I did tests at various settings and basically left it at 40 psi for low on, which was at the higher end of the range. 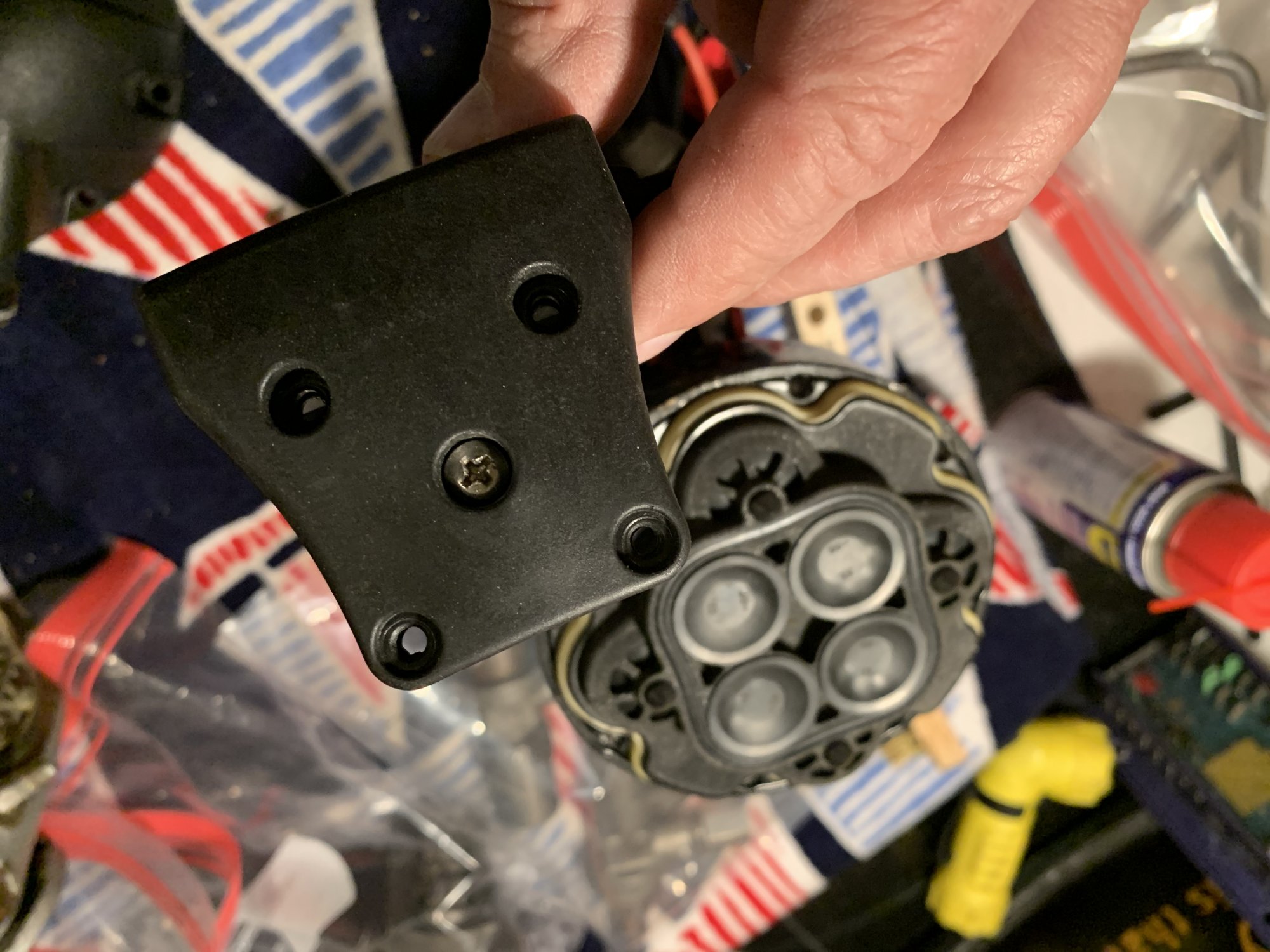 So, I set it up with 10' - 1/2" PEX leading to the pump. I used a 90 bend to draw water from the bottom of the 5 gal bucket. Everything is on level garage floor, which should simulate the bow tank set up. I used a flexible hose to bend the line around to the pump to simulate the current boat layout. I used 1/2" PEX for the discharge with a T for pressure gauge ahead of a valve for pressurizing the line. Pressure would jump from 40 psi to about 80 - 85 psi every time the pump clicked on momentarily. I'm guessing there is a check valve that leaks water back to the supply side because the pressure would diminish from high to low in about 30 seconds each time it was boosted. As an aside, I've noticed that when I open the boat, the pump always has to boost the pressure in the lines. When I installed a new Shurflo pump in Thunderbird, I could leave the boat for a week, power off, and the lines would still be pressurized when I came back. Obviously, the check valve was functioning very well in the new pump.

Is it normal to lose pressure that rapidly with this pump that I now have? When I was done with my testing, I left the pump pressurized when I pulled the supply side line out and I could see a very small amount of water leaking out the line (backwards) until the pressure went to 0. It took less than a minute to go from 80 psi to 0. 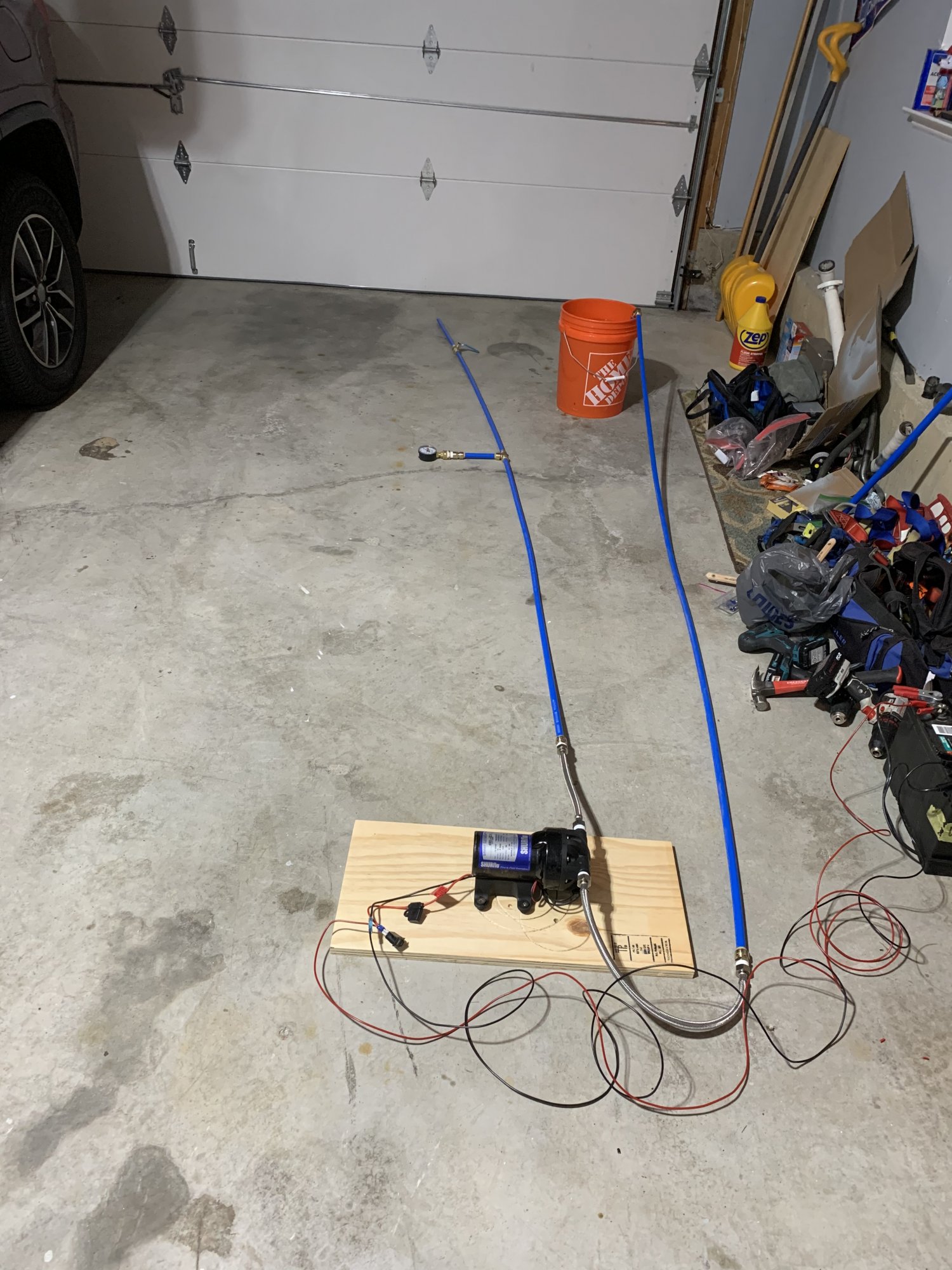 When I was doing the flow testing, obviously the gauge went to 0 as the valve was opened. That would mean that the flow pressure equalized on both sides of the pump, which is what I expected, since there are no restrictions, other than skin friction on either side. Flow rate was pretty good at about 2.2 to 2.4 gpm based on several measurements. The garden hose that I used to feed water to the bucket was less than 2 gpm so I figure the pump was doing ok. The pump is advertised at 4GPM, but I'm not expecting to get that flow with the smaller pipe size on the supply side. I measured the flow by stopwatch in a calibrated 2 gallon bucket. Flow rate was pretty consistent and did not change noticeably when I adjusted the pressure switch.

So, basically, I conclude that I will clean up the supply side feed in front of the pump by improving the orientation, removing fittings, and replacing with fittings that should improve flow on the suction side. I'll avoid changing line size. I'll try the pump with increased pressure setting. I'm not sure about this pump and I may decide to replace it, but we'll see after it is tested on board again ...

I am confused just a bit about the Catalina supplied PEX piping. The fittings that are supplied by CD indicate the line size is 15 mm. I realize that this might be slightly greater than the 1/2" PEX line size that you get from the hardware store. Yes? No? I bought a few fittings that I want from CD (sized for 15 mm). But, will sharkbite fittings that are made for 1/2" PEX work with the pipes that Catalina puts in the boat or not?

Scott T-Bird said:
Is it normal to lose pressure that rapidly with this pump that I now have?
Click to expand

Scott, the Shurflow pump on our C30 holds pressure until we open a faucet. It does sound like the check valve on yours is leaking. I think ours is 3.5 GPM.
J

JAE said:
So....what are the results?
Click to expand

Hunter 33 Steamboat Wharf, Hull, MA
Faucet Aerators come with different flow rates. I believe they are color coded. Reading the above I was unsure if you have already looked at these. On my boat I am going the other way, trying to reduce flow rate to conserve water. Aerators are made to accomplish this.

RoyS said:
Faucet Aerators come with different flow rates. I believe they are color coded. Reading the above I was unsure if you have already looked at these. On my boat I am going the other way, trying to reduce flow rate to conserve water. Aerators are made to accomplish this.
Click to expand

Among the first things removed / checked on the pressure side (along with the pre-feed strainer on the supply side).

I did notice when doing the bench test ... a very small air leak on the supply side caused the pressure/flow rate to be weak. In this case, I simply had not seated the PEX in it's fitting completely and it was easily corrected. I could hear the air leak and there was a small water leak to accompany it. I'm somewhat wondering if there could be an air leak somewhere in the boat's distribution on the supply side. I haven't seen any unexplained water, though, so I'm doubting there is any issue in that regard.

Catalina 320 Barnegat, NJ
Further reading about the the Whale piping (or metric pipe diameters). 15 mm is the outside diameter. Inside diameter is just 0.394". The inside diameter of 1/2" PEX is 0.485". There is significantly less cross-sectional area in the 15 mm piping than there is with the standard 1/2" PEX that is used in households. Combine that with the rat's nest of fittings and 90 degree bends that are assembled right in front of the pump and that is a recipe for flow restriction. I will be changing the orientation and parts to smooth out the supply side and reduce friction. I really think it is a mistake to use such small diameter on the supply side but it is a given that isn't easily changed.

BTW, I guess I answered my own question about the pipe sizes with some additional reading. 15 mm pipe and 1/2" is not compatible with fittings that are made for each, respectively. For one thing, 1/2" PEX has a thinner wall thickness than 15 mm. Leaks are likely to develop if you use Sharkbite (1/2") fittings with Whale (15 mm) tube and vice versa between Whale fittings and 1/2" tube.

I don't really understand why the pump pressure fluxes so greatly within short time intervals. I suspect that the check valve within the pump has failed. I could look at repairing the pump .... but simply replacing it for $165 is far more expedient and a more economical use of my time. I should have this put together soon, but I won't have water on the boat ( or the boat in the water ) for at least a month.
Likes: Ward H

Catalina 320 Barnegat, NJ
Well, I finally finished my plumbing improvements and I'm happy with the results. I replaced the pump and installed a Shurflo Aquaking 4 gpm. I eliminated all of the tee's and elbows on the feed side that I could reach. I used flexible hose to make gradual sweeps both into and out of the pump. I installed a wye fitting with integrated shut-off valves as a manifold to distribute the water from the 2 tanks. It is basically a garden hose fitting and I used adapters to make everything go together with the correct threads, hose sizes, etc. It's sort of a Rube Goldberg assembly, and technically, there may be some fittings that aren't strictly approved for potable water (lead). But I still drink water from the garden hose and I don't drink much water from these tanks. In any case, everything I have changed is accessible and I can go back to original fittings if I like.

I added a small Whale accumulator tank. I'm still not sure if it has any affect, but it wasn't too costly and I had the room, so ....

I have a leak at the bow tank right now. I replaced the original plastic threaded fitting with a stainless steel male-thread fitting that has a barbed hose connection for a slightly larger discharge hose that eliminates the elbows. The metal into plastic tank didn't quite mate very well. I wasn't sure what to use ... teflon tape or pipe dope. I used teflon tape and I didn't get real physical in threading the fitting. I might go back and get a plastic fitting. I know the thread on the metal fitting is compatible but it makes me nervous to over-tighten.

In any case, I'm much happier with the pressure at the faucets and the operation is now quieter and smoother.
Likes: Ward H
You must log in or register to reply here.
Share:
Email Link
Top Bottom