Beneteau Oceanis 423 Rhode Island
Hi All,
I think this might be a fairly common problem. Today the bronze threaded hose barb venting my stern tube popped off. Lucky for me the boat is on the hard and I discovered during some other maintenance.

How difficult is it to get the rest of the fitting out of the stern tube? Drill it out, other methods? I assume I can leave the prop shaft in place. The fitting is also quite close to the Volvo mechanical seal. Assuming I can just loosen the stainless clamp and slide forward an inch or so. See pics

Have others replaced the threaded hose barb with bronze or plastic and if so how are you securing this in place - with epoxy or fiberglass. I don't think I want this to fall off again.

Thanks in advance.
Peter

Beneteau Oceanis 37 LE Havre de Grace
You’re right that you’re not the first one to have that problem. I haven’t myself, but there is a good discussion about various ways to fix it here - Check your stern tube water nipple
Likes: PDReynolds

First, the good news.
This happened on the hard and you didn't flood or sink your boat. Also avoided an emergency haul out.
You should be able to remove the broken piece of nipple from the shaft log with a screw extractor. Buy a set so you can
fit the best size extractor to facilitate removal. Extractor sets are available at Home Depot, Lowes, Harbor Freight, Amazon, etc.

You can not find an OEM bronze nipple (1/8') any where in the US. Beneteau USA doesn't stock them any longer.
( It infuriates me that they don't as they put hundreds of them in their boats and they advise periodic replacement, because
they know about the problems with corrosion and breakage.)
The only place that you can purchase the exact replacement is from Beneteau France, at Ancasta International boat sales.
Place a piece of Teflon tape on the treads and a bit of 4200 on it and screw the new one in and you're good to go.
Part number 460646 - Stern Tube Fitting Repair Kit Cost $99 + 96 shipping!
Telephone 02380 457370
enquiries@ancasta.com to the attention of Jacqueline or Tricia

Another option is to purchase a repair kit from Annapolis Yacht Sales parts dept.
Only problem is that the replacement that they sell is thin walled brass that is not near the quality of the OEM nipple.
Also, it is not the same size; therefore, you will have to tap the hole to the size of the nipple and build up an epoxy fillet
around the new nipple. I purchased one and was not satisfied with the quality; therefore, I didn't use it.

Another option is to wrap the stern tube with a piece of roving tape about 2" wide and glass a few wraps of the roving to
build up the thickness of the tube. Then buy a 316 SS nipple of adequate thickness and size that you desire (doesn't have to
be 1/8"), drill & tap, and install. This would allow you to either remove and inspect on haul out or replace as the cost of the
SS nipple is negligible.

Finally, another option is to discard the Volvo shaft seal and replace it with a PSS shaft seal or other seals that are comparable.

On my haul out approximately 15 months ago, I didn't have time to glass the tube & tap to facilitate placement of a SS nipple and
I didn't trust the yard to do it properly. So, I ordered the OEM fitting from Ancasta. It took 10 minutes to remove & replace;
didn't even disturb the epoxy fillet that remained. I removed my nipple on previous haul outs to inspect it and it looked OK, even
when I replaced it last time, when it was approximately 13 years old. You have to cut the hose from the nipple to remove and inspect the nipple. If the new one lasts another 10 years, I am OK with the $200
even though it's a total ripoff. IF you do decide to order one from Ancasta , you might ask them to ship the nipple only without
the epoxy repair kit. The epoxy kit may have increased shipping cost as it is likely considered hazardous.

Let us know your decision and how it all comes together! Good Luck. 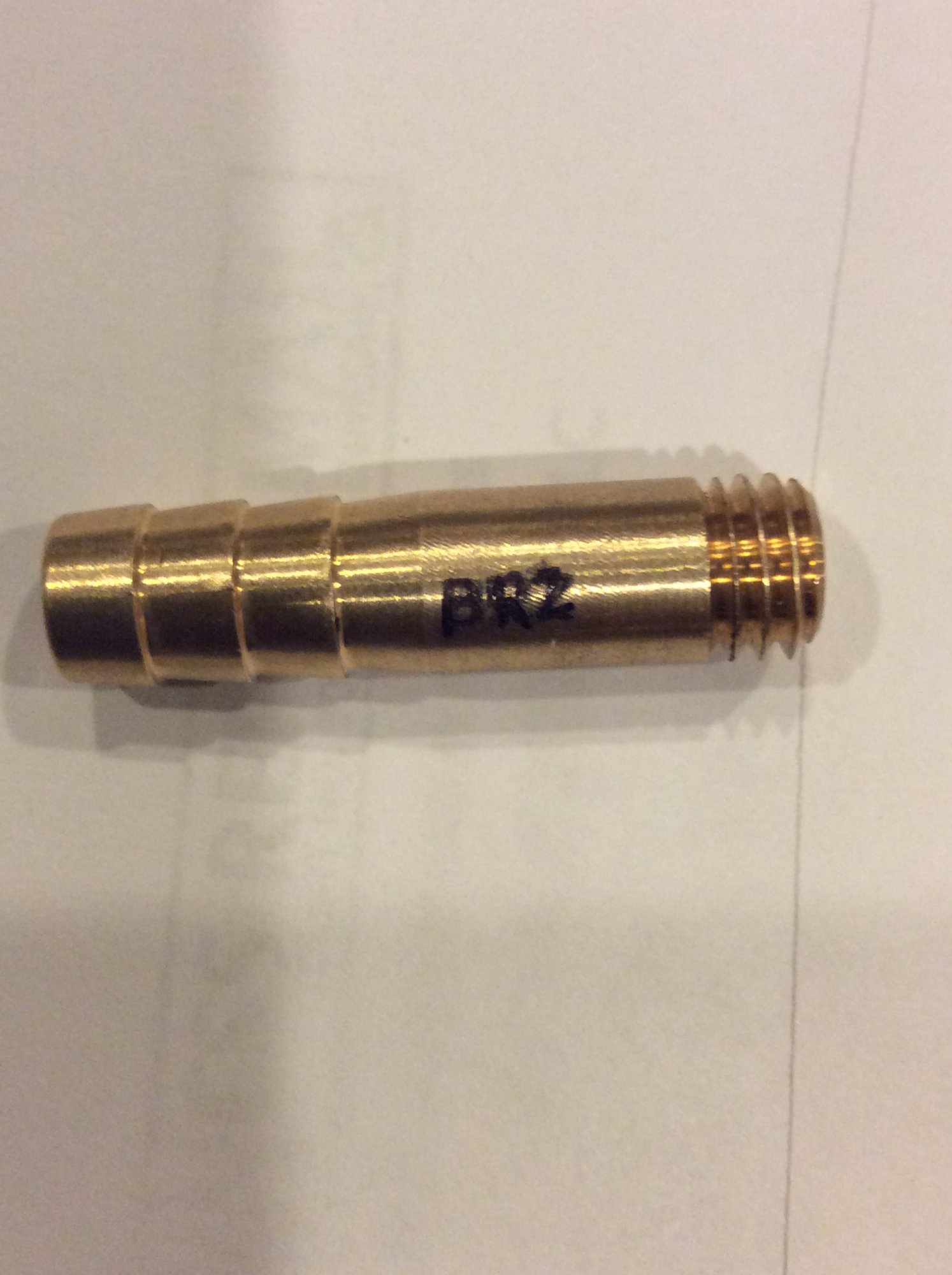 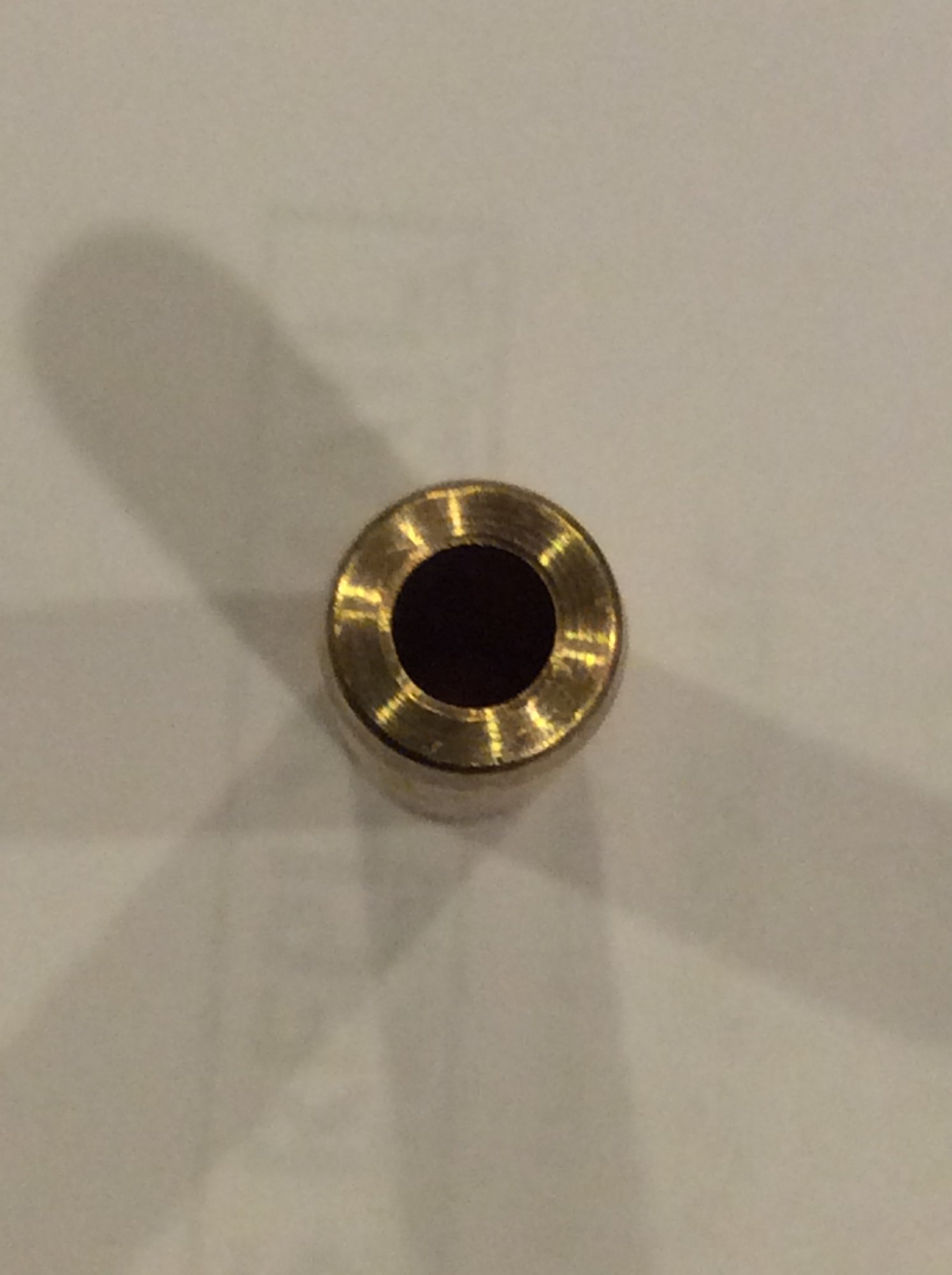 Beneteau 343 Slidell, LA
I am somewhat surprised that an industrious machinist or mechanic hasn't replicated the nipples and marketed them on the net; similar to the Cariblue guy that makes replacement transmission dip sticks for Yanmars or the guy that sells boom brakes. The cost of a piece of 316SS would be neglible and at a price point of $50, it would be much simpler rather than retapping the hole for a larger nipple, epoxying, changing the hose or placing another tailpiece /adaptor. Could be a good endeavor for someone who has spare time.
Lots of Beneteaus out there that are faced with this problem.
Likes: BrianRobin

Beneteau 331 Halifax
I have the same device (B331) but I wiggle it often and it seems fine. However, do you really need the thing? Does water really go up that hose and then lube the stern tube? From the look of the one above, it seemed plugged anyway. Maybe just take it out and epoxy the damn thing over....or am I missing something??

Bluenose said:
I have the same device (B331) but I wiggle it often and it seems fine. However, do you really need the thing? Does water really go up that hose and then lube the stern tube? From the look of the one above, it seemed plugged anyway. Maybe just take it out and epoxy the damn thing over....or am I missing something??
Click to expand

Unfortunately, the fitting and its location is a really weak link. It does appear that corrosion is a more serious issue in salt water than in fresh.

Catalina 1999 C36 MKII #1787 Coyote Point Marina, CA.
I do not have one of these systems. I assume that the thread is metric. Why not take a stainless steel bolt that has thread at the end only and drill a hole down the centre and cut the head. Would that work? I believe when reversing the propeller it pushes air bubles into the tube replacing the water. So this is how air is removed so water can enter the tube and lubricate the shaft seals.
Last edited: Mar 25, 2020

Beneteau 343 Slidell, LA
I don't think it's a good idea to wiggle it, because you make weaken the thin shaft log, disturb the epoxy fillet around the nipple, or break off the nipple. Then you are looking at a haul out to repair. On scheduled haulouts, simply cut the rubber hose at the top of the nipple and unscrew the nipple to inspect. Clean it out and inspect, if it appears to be in good shape, put some Teflon plumbers tape and a bit of 4200 the threads and reinstall. An advisory from Beneteau from 2012 recommends annual inspection.

I have read that in a few cases, the nipple broke off while the boat was unattended , causing the interior of the boat to flood.
So, there is water flow that occurs, even when the boat is stationary. I have wondered if the boats that have had flooding episodes had
the seacock open, or if there is sufficient water coming from the cutlass bearing to allow flooding from a broken stern tube nipple.

Good question about the necessity for the nipple. Correct me if wrong; however, I believe that PSS high speed seals for power boats
advise use of a water coolant nipple and its optional for sailboats.

It would be much simpler to purchase a 1/8" 316 SS nipple from McMasters, rather than attempting to ream / drill a SS bolt, also nice to have the barbed end to enhance the attachment of the rubber hose & clamps.
Last edited: Mar 25, 2020

Beneteau 331 Halifax
Thank you. When I say wiggle, I guess I meant a light touch to ensure solid. That's a great idea about an inspection. MY view was if it ain't broke, don't touch it. But now I will check it. If I cut the tube, what device should I use to reattach?

Beneteau 343 Slidell, LA
You should be able to cut hose atop the nipple several times over a few years as you are only losing approximately 1" of hose when you inspect the nipple. When you do eventually replace the hose, purchase it longer than necessary to allow for future inspections. There are no lugs on the nipple for a wrench to engage, so use vise grip pliers or channel lock (water pump) pliers to remove. Simply reattach the remaining hose with two hose clamps and that's it. Blue, with the vintage of your 331, I would definitely remove and inspect while you are on the hard and have a plan formulated for replacement as yours is overdue for replacement. I have attached a photo of 316 SS nipple that I purchased from Mc Master Carr. It is 1/8 NPT x 1/4" hose. You would have to retap the hole in the shaft log and build up the epoxy fillet to accommodate the new nipple. Round off the lugs to enable you to remove it in the future without breaking the epoxy fillet. If you decide on this option, it would be advisable to build up the FRP shaft log with roving tape & epoxy to make the entire assembly stronger, before retapping. Just some ideas here, instead of paying $200 for the OEM part from Europe.

Mechone said:
Bought mine from amazon 25 of them for 30.00
Click to expand

Should last for a few years!
Again, really chafes me that Beneteau USA will not have the OEM fittings manufactured and make them available to owners at
a reasonable cost.

Beneteau 393 New Bedford, MA
BigEasy,
Is that a picture of the OEM fitting? The threads are mush smaller and don't looked tapered. It does look like a simple part to make.
M

Beneteau 351 WYC Whitby
I did a modification to mine , I installed a 12volt mag pump,pumping water thru an aluminum block bolted to the transmission then out thru the nipple. I had to add the pump ,there was no flow just plumbing it in and the aluminum block got super hot. I also added a strainer before the pump.I read doing this increases the service factor one size ,it takes a hbw100 to a hbw150
Last edited: Mar 28, 2020

Bob S said:
BigEasy,
Is that a picture of the OEM fitting?
Click to expand