Catalina 36 MK1 94 Everett, WA
We put John and Lynn in the “Back Room”. A 30’ dash on a snow covered deck to get to the potty and a warm cozy small cabin. I’m so mean.
Likes: jon hansen, jssailem and Michael Davis

CAL 35 Cruiser moored EVERETT WA
Here is a picture of my wife walking from the out lying shed (cabin) to the big house. 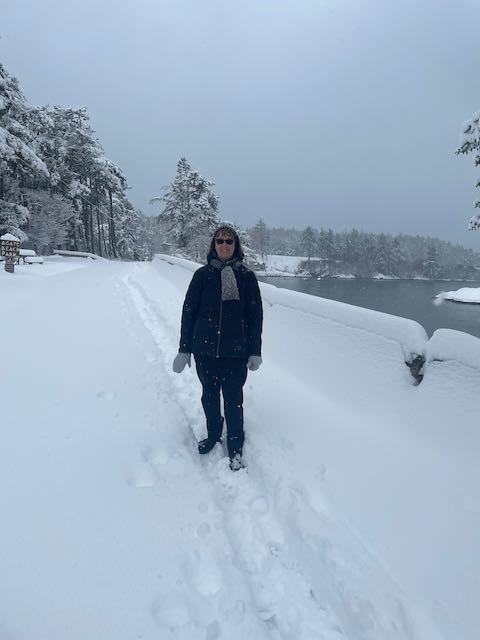 Les is so mean...
waiting two be admitted to the big house. 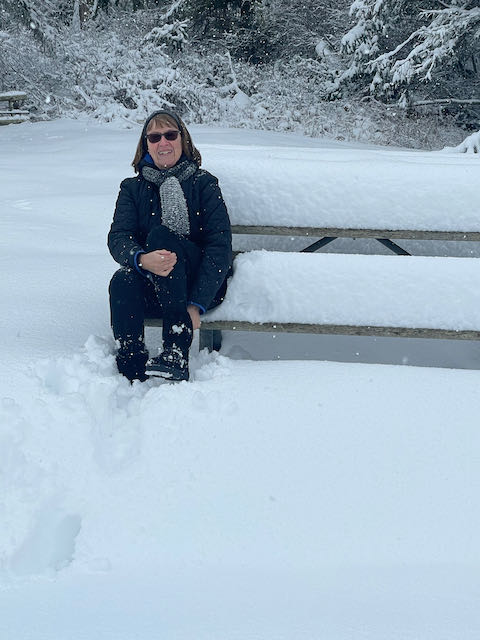 Catalina 36 MK1 94 Everett, WA
The bench between there and here hasn’t been sat on since the snow started, and a walkway plowed with a dust pan by yours truly (with some help from John). As the pic showed more like 15’

LeslieTroyer said:
plowed with a dust pan by yours truly
Click to expand

Where’s @ Ward H when you really need him?

jssailem said:
I can see "Outer Bay" and the visibility is about 1/8 mile.
Click to expand

A question, where is Outer Bay? Do you mean Mackay Harbor or Barlow Bay? All sounds cozy.

CAL 35 Cruiser moored EVERETT WA
Here is one of the practical items to include on your list of Coastal Cruising Equipment. A good chart. This one also is showing our position ashore.

Mike, I trained them well
Likes: Michael Davis and jssailem

Hunter Passage 42 Shelter Bay, WA
Many years ago, the Admiral and I were on our way home from a cruise around the islands, heading for Mackaye Harbor for the night. We were on our first boat, an H28 with minimal instruments. Based on my chart work I knew about where we were, but it was after dark and in fog soup. We creeped toward some sign of land as a point of geographic reference, when out of the fog appeared this big (100+ feet), brightly lit cruise ship anchored in Outer Bay.

The Admiral was on the bow with our spot light giving me signals about this or that, but when that ship appeared, it became our reference point. So I steered to port to get around iceberg point and into Mackaye Harbor, drop anchor and settle in for the night. How we managed not to hit any rocks, no idea, but that was one cruise I will never forget. Wished I would have had our Garmin GPS then. My depth meter and compass were the only useful instruments at that time.
Likes: jssailem

Beneteau First 38 Lyall Harbour Saturna Island
@snoopy_ ,we’ve kinda hi-jacked your thread about coastal day sailing. Sorry. There are many of us here who started day sailing with no equipment beyond the boat, started coastal cruising with only a chart, compass and a pair of binoculars. Not to say that it’s not nice, safer ( much) to have a lot of the toys and whistles mentioned. A VHF is a must these days I think, other toys can be added as you go along.
Likes: jssailem
G

MacGregor MacGregor 25 Monterey
In many situations, there is increase and decrease of sea floors. One can grow accustomed to this with experience. There are instances where nothing will prevent a helmsman from hitting a “wall,” but it’s always a matter of depending on the odds being with you. As far as floor variances, going aground is greatly diminished if sailors have their vessels equipped with depth sounders.
S

Catalina 30 Riverside, NJ
Update: I completed my trip this weekend, which took me from Riverside NJ down the Delaware to the C&D canal for an overnight at Summit North Marina, then the next day we motored across the Delaware Bay to Cape May NJ. Total voyage was 18 hours and 95 NM. The last four hours was very choppy with a lot of hobby-horsing, but we made it safely to our new marina for the summer.

My Lowrance Chartplotter/GPS/Depth finder died on departing. It was stuck at logo screen, so I need to figure that out. We used charts and Navionics on my phone the whole way. I also had backup GPS antenna with Navionics on an iPad, plus detailed charts for each leg of the trip.

My marina is extremely small, and steering my boat in such tight spaces, with wind and current is going to be a trial in patience. There are finger peers, but backing in seems to be best and what I am most used to.

Thanks for all the comments and advice, whew!
Likes: dirt rd, Michael Davis, Ward H and 1 other person

Pearson 37 Lusby MD
Tks for sharing the successful outcome with us.

snoopy_ said:
My Lowrance Chartplotter/GPS/Depth finder died on departing. .... We used charts and Navionics on my phone the whole way. I also had backup GPS antenna with Navionics on an iPad, plus detailed charts for each leg of the trip.
Click to expand

Congrats on a safe arrival at your intended destination. 95 Nm trip is one to log in the books.

And they say detailed charts are a thing of the past. Such detail comes in handy if the electronics poop out.

Enjoy learning to get in and out of your new marina. I am confident that it will be another successful evolution once you have developed the procedure and executed the tasks a couple of times.

Have a great summer sailing.
Likes: snoopy_
You must log in or register to reply here.
Share:
Email Link
Top Bottom