Hunter 34 Deep Bay, BC
The raw water strainer on my Hunter 34 needs a new gasket for the top cover. It's a special thin plastic gasket shaped to fit the labyrinth seal. The engine is a Yanmar 3GMF, and the local Yanmar guy suggested just making a cork gasket, but looking at it I'm certain that won't work (he hadn't seen the actual strainer). I'll try to get out to the boat this afternoon to take a photo of the actual gasket and inside of the cover.

Can anyone make out from the photos what make this thing is? I can't find a name on it anywhere, looking with a flashlight and a mirror.

Hunter 34 Alameda CA
Claude is right about the strainer gasket. I used a cork one. While you are at it, consider moving the entire thing forward where you can access it a lot easier in a pinch. 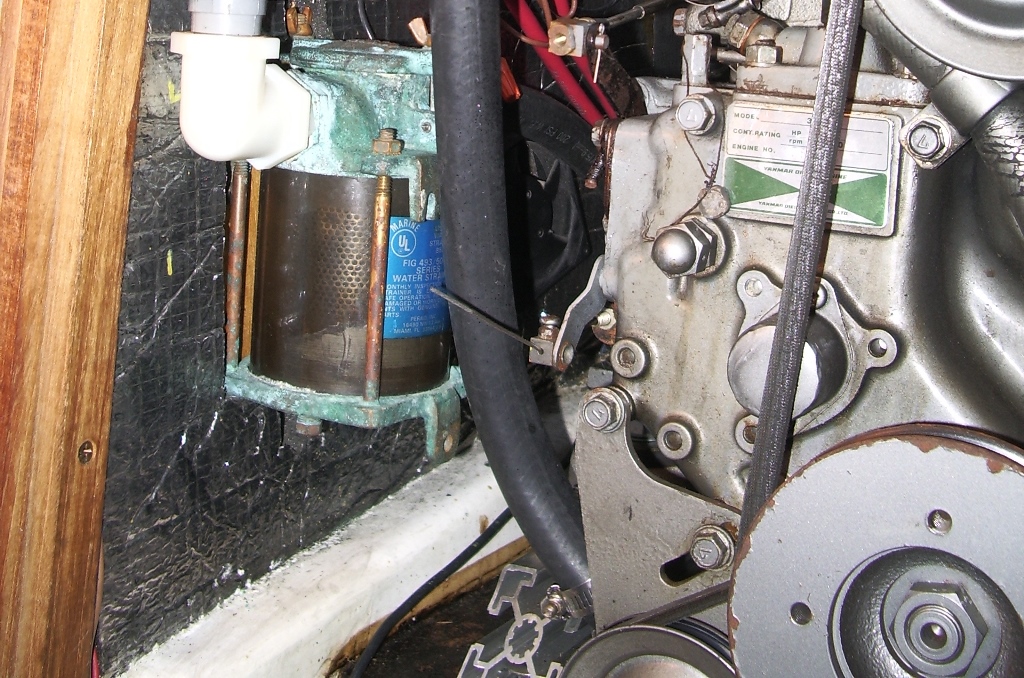 Hunter 34 Punta Gorda
I went to my local auto discount store and bought a piece of cork gasket. It's been working perfectly for me so far.
-Jon

Hunter 34 Deep Bay, BC
So the thing that I thought was an elaborate formed gasket appears to me now to be some previous owner's bubble gum attempt to seal it. It's a thin piece of plastic maybe 0.020" thick that got formed in the shape it did by being crushed between the cover and the strainer. With time, it took a set in that shape. I'm attaching a picture (apologies for the quality).

I didn't think I could make a gasket because I was thinking of a full disc. I can see now (and from seeing the ones in the links Kloudie posted) that a narrow ring will work fine. Off to the auto parts store this afternoon. I'm going to see if I can buy some neoprene gasket material with a bit of stickum on one side. That way it'll stay with the cover when I open it to clean it. Which needs to be done A LOT in the waters around here.

Some of the things done over the history of this boat were done very professionally, and some are simply "what?" Such as the wiring for the cabin lights where the connections were made by twisting the wire together and taping over it. I'm betting the gasket on the strainer was done by that guy.