Hunter 19-2 Austin
A couple of weeks ago I bought this old Hunter 19-2. I never even heard of Hunter. Then in my searches, this one pops up. It was in the middle of nowheres, so I'm guessing that is why nobody went out there to look at it. Since I was already planning on getting an old small sailboat, I was already planning on doing all the normal repairs like sealing all the leaking windows, and restoring all the wood and cushions, plus replacing all the normal stuff that normally wears out. This one looks like it has been sitting since at least 2014, since that is what the trailer tag reads, and the boat tag reads 2009. The boat was filthy, but the bottom of the hull looked like new, so I don't think it has been in the water much. The inside was pretty dirty, but the nice thing was, there is no wood to restore, and the windows didn't leak. The only thing was that it was dirty, mainly from just seating. The owner said it had a brand new 6hp Tohatsu 4 stroke outboard, with only 2 hours on it. So I basically bought it for the outboard. The trailer looked in excellent condition. So we made a deal. I had to get two new tires for the trailer, and I pulled it home. The bearings where fine, and most of the lights worked.

First thing I did was mess with the outboard. I dumped the old gas, and put in some brand new gas. I was expecting it not to start, because I figured the carburetor was clogged up, but to my surprise, it started on the third pull, and in idled perfect, and had a nice stream of water coming out. Next thing I did was power wash the boat from top to bottom, and all the dirt came right off to reveal a beautiful boat. I then cleaned all the cushions to get all the mold off, and they came out excellent. There is no wood inside the cabin, so I didn't have to restore anything, and the windows don't leak.

Next thing I did was to figure out what needed to be replaced to get the boat lake ready. I replaced all the lines in the mast. I also replaced the line going to the center board that I talked about in my previous post. The sails where stored inside the boat, so they are good to go. The other things that needed replacing was, one of the spreaders was bent, so I ordered two new ones. I tried to straighten it out, but it cracked. I also had to get a new forestay, because the stainless steel line was frayed. I had a new one made up locally. The main sail is missing the middle batten, so I will have to make one of those, but that is pretty easy. So that is pretty much it. I'm just waiting on the new spreaders, before we take it to the lake. I think I got off pretty easy.

Today I put that cracked spreader back on and raised the mast. It is still plenty strong to hold the mast up in my back yard. The mast went up pretty easy, since Hunter gives you a gin pole to help you raise the mast. They also give you two extra wires that keep the mast from falling side ways. I had no problem raising the mast by myself. It was basically a piece of cake. When those two new spreaders get here, the boat will be pretty much done. Here are a couple of before and after pictures. The power lines are far away, so don't freak out. 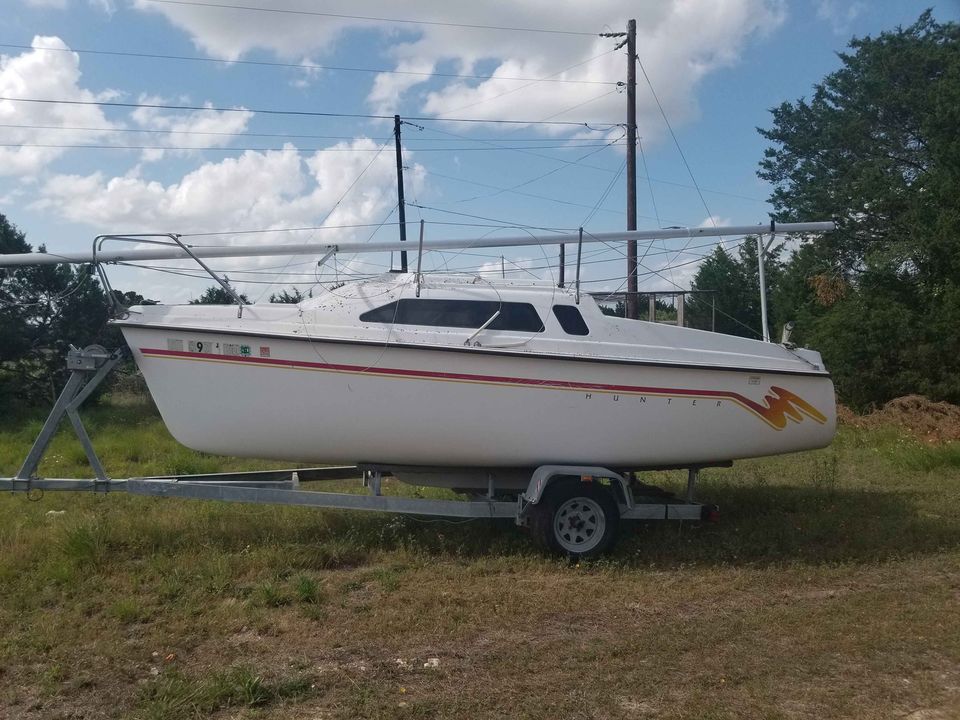 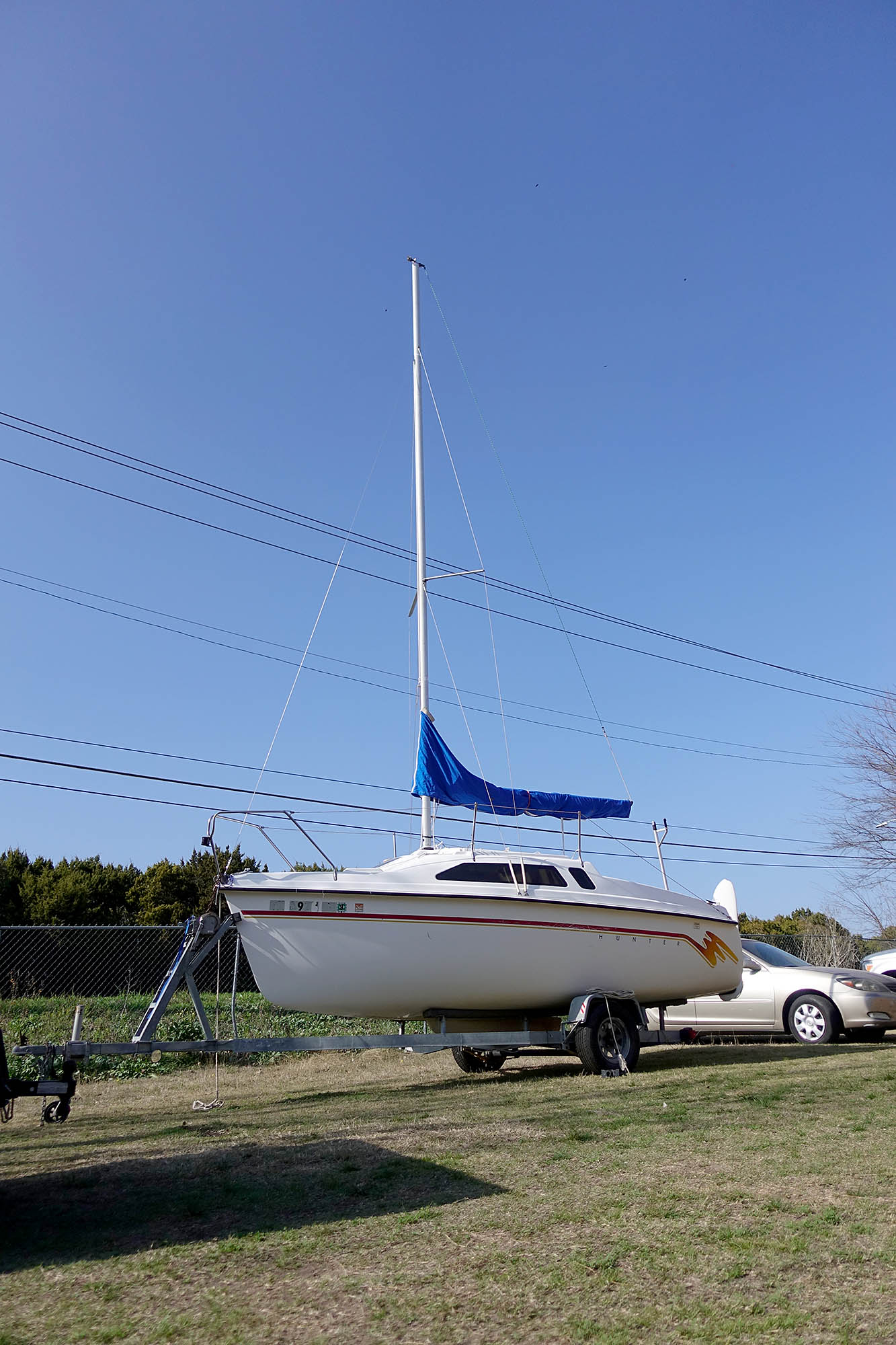 Hunter 23 St petersburg
Great job! After rebuilding an H23 i can tell you, fiberglass inside is the best. Enjoy!
Likes: Panotaker

Catalina 22 Seattle
Thanks for your order! Looks like a tidy little ship, have fun, that boat sails nice!
Likes: Panotaker
C

-na -NA Anywhere USA
From a former Hunter dealer who introduced the boat and took the last one off the line when retired by Hunter, i appreciate that you cleaned/repaired the boat sharing photos of your work. Job well done
Likes: Panotaker
H

SunTracker 18 DLX PartyBarge Hoover Reservoir - Columbus OH
Nice looking boat. You should have a great time sailing her. I had one for about 20 years and enjoyed the heck out of it.
Likes: Dave Groshong and Panotaker
P

Hunter 19-2 Austin
Here is a picture of the interior after I cleaned it up. It cleaned up nicely. I mainly just vacuumed up all the dirt, then just cleaned everything with Totally Awesome from the Dollar Store. The portable-potty was missing when I got the boat. The alcohol stove was included and looks new. The Ralphstoration is coming along nicely. One nice thing about the plain jane interior of the 19-2, is that you have plenty of leg room to sleep in, even if you are 8 feet tall! There is another cushion not in the picture that goes in front of the mast support. 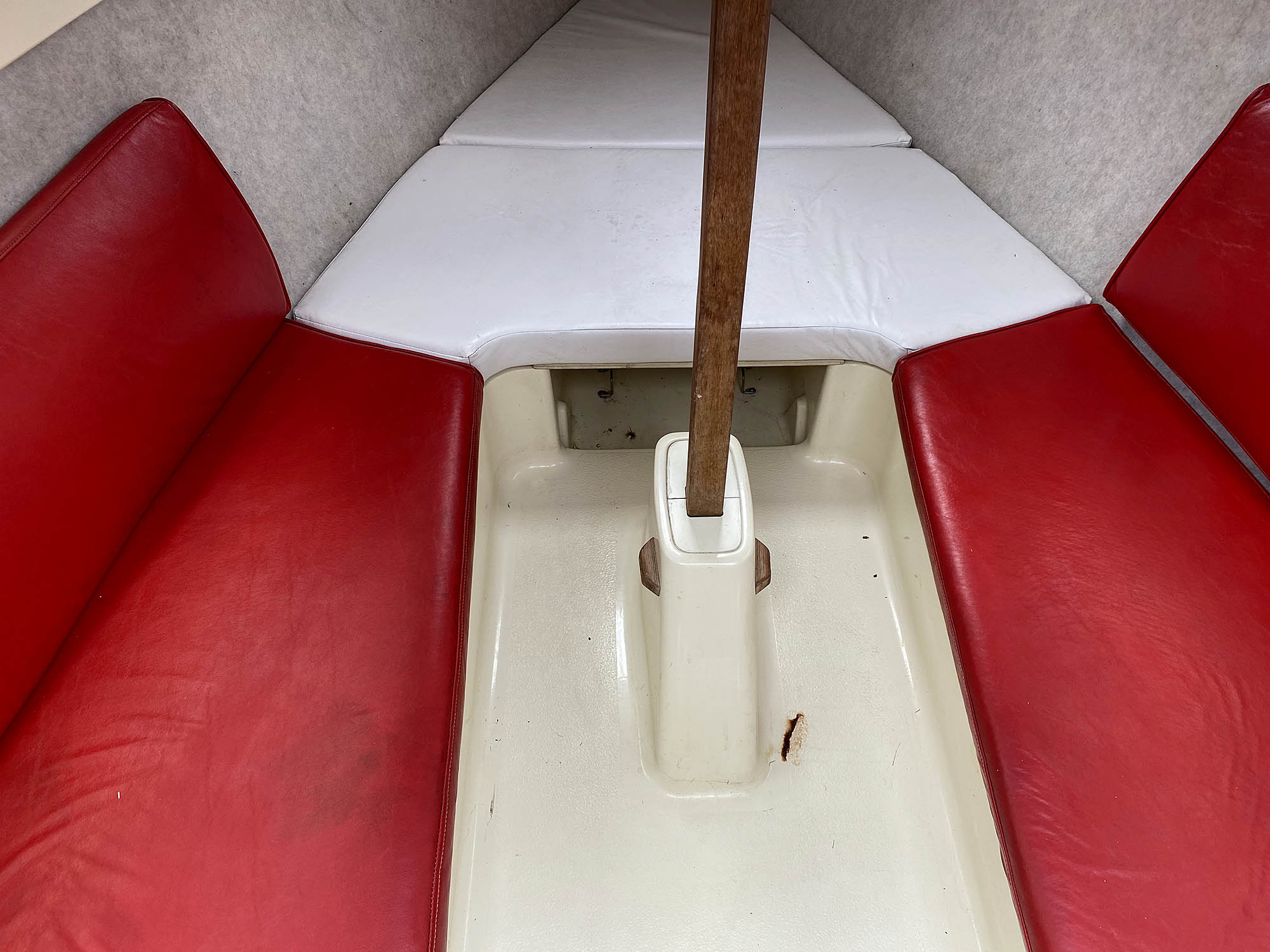 ODay Javelin rangeley, ME
Boat looks great. Hav had 1 for a few years. Hav had some problems with the furler and received much help from the forum.
Mine has become a bit dingy. What did u use to clean the exterior? Good luck
P

Hunter 19-2 Austin
Thanks. The exterior I cleaned with a pressure washer. The dirt came right off. The paint was still good underneath all the dirt, so I got pretty lucky.
R

Hunter H19-2 Cary, NC
Nice Job ! I just got a hunter 19-2 2 weeks ago. She needs a little love. Looking forward to this forum. Only learned to sale last summer. got ASA cert. Got this as a learning boat. They are great little boats from what I have been reading.
Rich
M

Hunter , Catalina Hunter 19-2, Catalina 22 Cary, NC and Jordan Lake
I also recently got a Hunter 19-2 (also in Cary). Anxious to get her home then on the water (I had a little, "trailer," issue on the way home yesterday). The boat seems well designed with the trailer sailer in mind.
Panotaker, your boat looks great!
R

Hunter H19-2 Cary, NC
No kidding, Plan on sailing on Jordan ? I picked her up at Oak Island. She was a donated boat to the water rescue. Hope to get her on the water soon. Glad the issue was not bad. I had my trailer inspected before the 2 plus hour trek back to Cary. Was not looking to be stuck on 40 for sure.
Rich
P

Hunter H19-2 Cary, NC
Thanks. Appreciate any help for sure. I downloaded the owners manual online. Its has the 19 and the 23.5 and the 25 all listed in the same manual.

Panotaker said:
Glad to see a few more 19-2 owners here. If you need any help. Let me know.
Click to expand

Just about ready to splash this boat but really confused about the rigging. She has a flexable roller furler. there is a slot in the mast for the top of the furler which has a cable with a metal key that fits in it. I am trying to figure out how to get the sail installed to eventually roll it up on the furler. The other thing that I am not sure about what line to use to hoop to the end of the boom. I am to total newbie here

Just about ready to splash this boat but really confused about the rigging. She has a flexable roller furler. there is a slot in the mast for the top of the furler which has a cable with a metal key that fits in it. I am trying to figure out how to get the sail installed to eventually roll it up on the furler. The other thing that I am not sure about what line to use to hoop to the end of the boom. I am to total newbie here

Rich, here's a link to the CDI FF1 manual. You should be able to find answers to most of your questions.

Not really sure of your intent of hooking a line to the end of the boom. Are you thinking of a topping lift, used to raise the boom some when not sailing?

Have fun and enjoy your H19
R

Hunter H19-2 Cary, NC
That is awesome. Think it will help a lot. Appreciate it!

Hunter 19 Lake Mendota, WI
I recently bought the exact same boat (see pic). I've sailed it three times and love it. Let me know if you need any help or learn anything that I should know. And like you said, the power lines are far away, so don't freak out.

Hunter H19-2 Cary, NC
Probably seems like a dumb question but being a newbie, only way to learn is to ask. The Hunter 19-2 I purchased we worked out the mast issues. New spreaders and rigging. The question I have is the line that goes from the top of the mast to the end of the boom. Guess my boat never came with one. How do you figure out the length. I guess it's called the topping lift ?

The Hunter 19-2 manual is not the best. Its part of the overall manual for the 23 and 24.5 boats. Setting up the rigging has been a challenge.

SunTracker 18 DLX PartyBarge Hoover Reservoir - Columbus OH
The topping lift for the 19-2 specs at 26' of 1/4" line. I had mine setup so the lift ran from masthead to a couple of feet above the level boom, ending with a block. a 2nd line ran from end of boom up thru the block back into the boom of the turning block, exited at the mast. Under way the lift was eased so the main supported the boom. Under power or at the dock the lift was trimmed to support the boom above head height.

This setup allowed for removing the boom for trailering or storage by separating the two parts of the topping lift.
You must log in or register to reply here.
Share:
Email Link
Top Bottom