Hunter 34 Toms River Nj
I just got my new to me an old mini 12 meter America’s cup replica. This little sailboat is absolutely awesome!!!
I toyed around with it late last year.
You basically set low with in the hull while you are setting in a recliner position and essentially only your head sits just about at the water line. All line controls are controlled from the cockpit and the rudder is controlled by foot pedals. The boat has lead buck shot bags that you place into the hollow keel for weight dependent on what the wind conditions.

This thing is absolutely a blast to sail.
Remarkably fast and stable. Really gets the adrenaline going when your head and shoulders are literally inches from the water. Can’t wait to toy around in it this season.
I rented one of these in the late 1980s in Newport RI during the America’s cup races during the top secret wing keel era.
I got it late last year and had to do a little tlc work to it. Couldn’t pass up the price
“Free to a good home”. Just had to basically clean 30 years of dirt and replace some halyards and restore the trailer.
Now it’s ready for real sea trials.

I’m looking for any info anyone may have on these sailboats.

I was able to find a copy of the owners manual on eBay however it’s not a clear copy and missing lots of pages.

Info that I have is:
Illusion mfg
Hin # indicates it’s a 1983
Apparently as legend has it some guy made one and sailed it around at his yacht club and got an overwhelming number of people that wanted one at his club. Then he started taking orders for them thru sail magazine for about $12,000 delivery date from start to finish approximately six weeks.
Boat is a scale replica of 12 meter America’s cup racing yachts Intrepid or courageous.
Found few you tube vids of people racing.
But that’s all the info I was able to obtain so far. 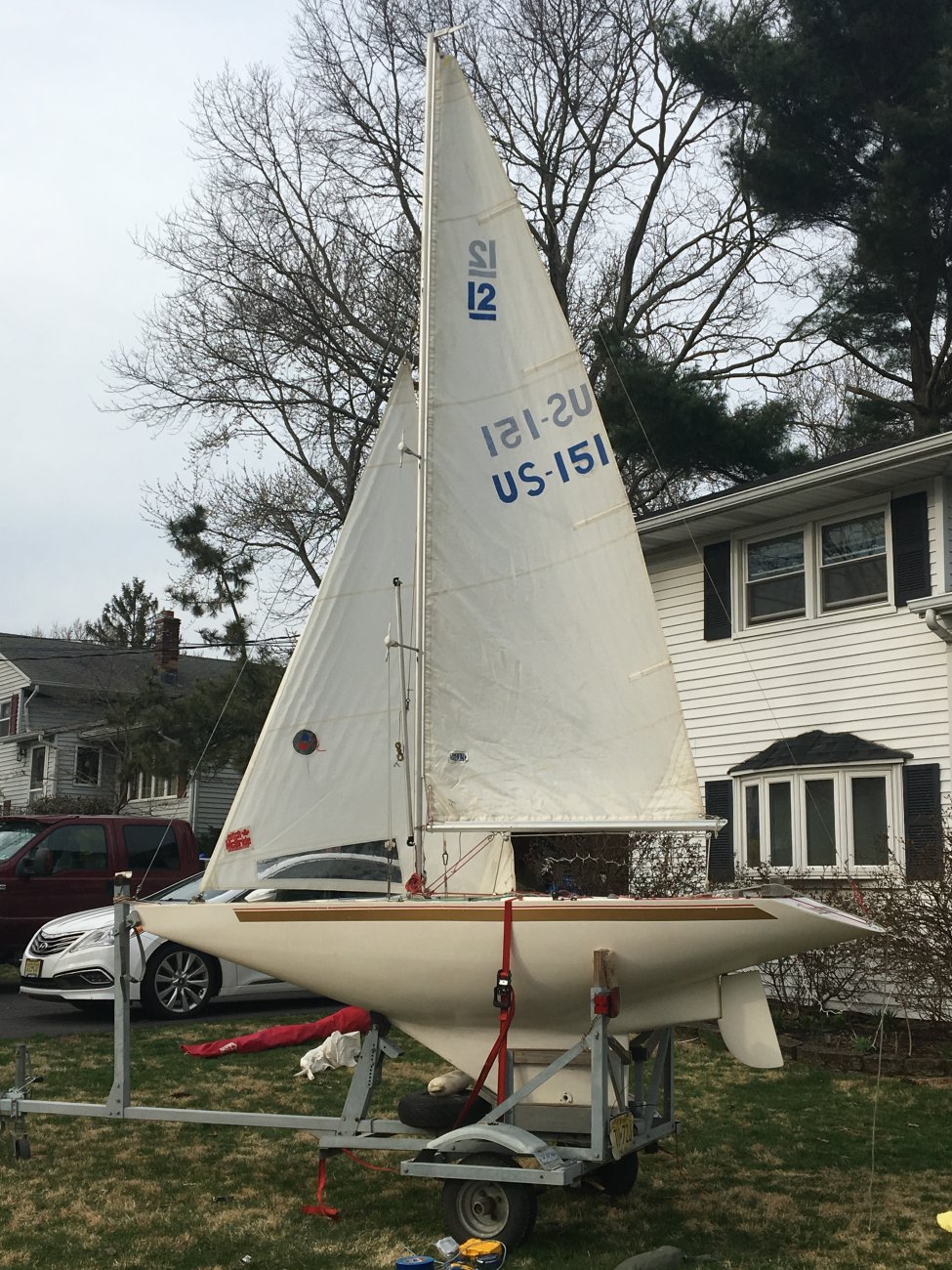 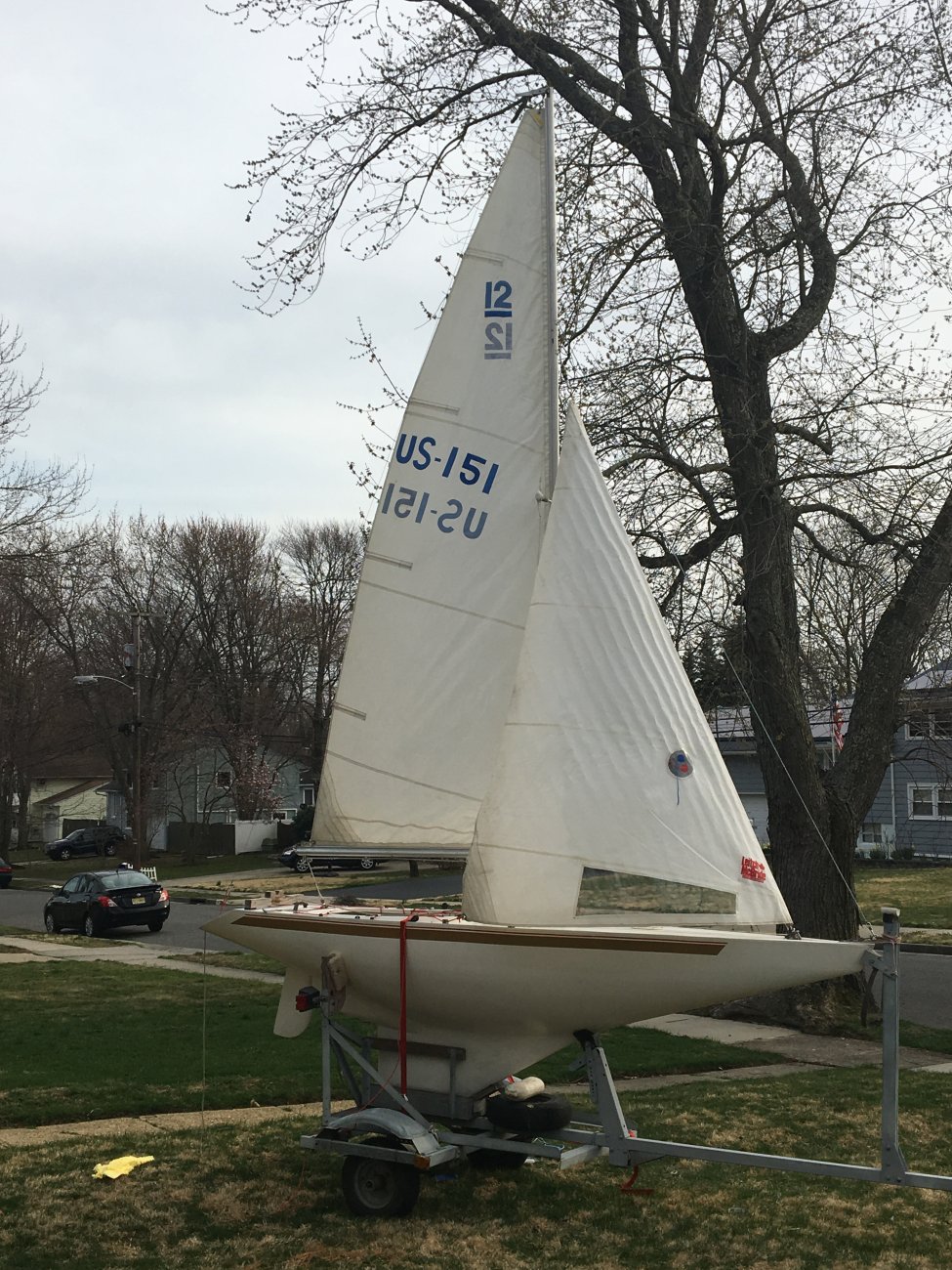 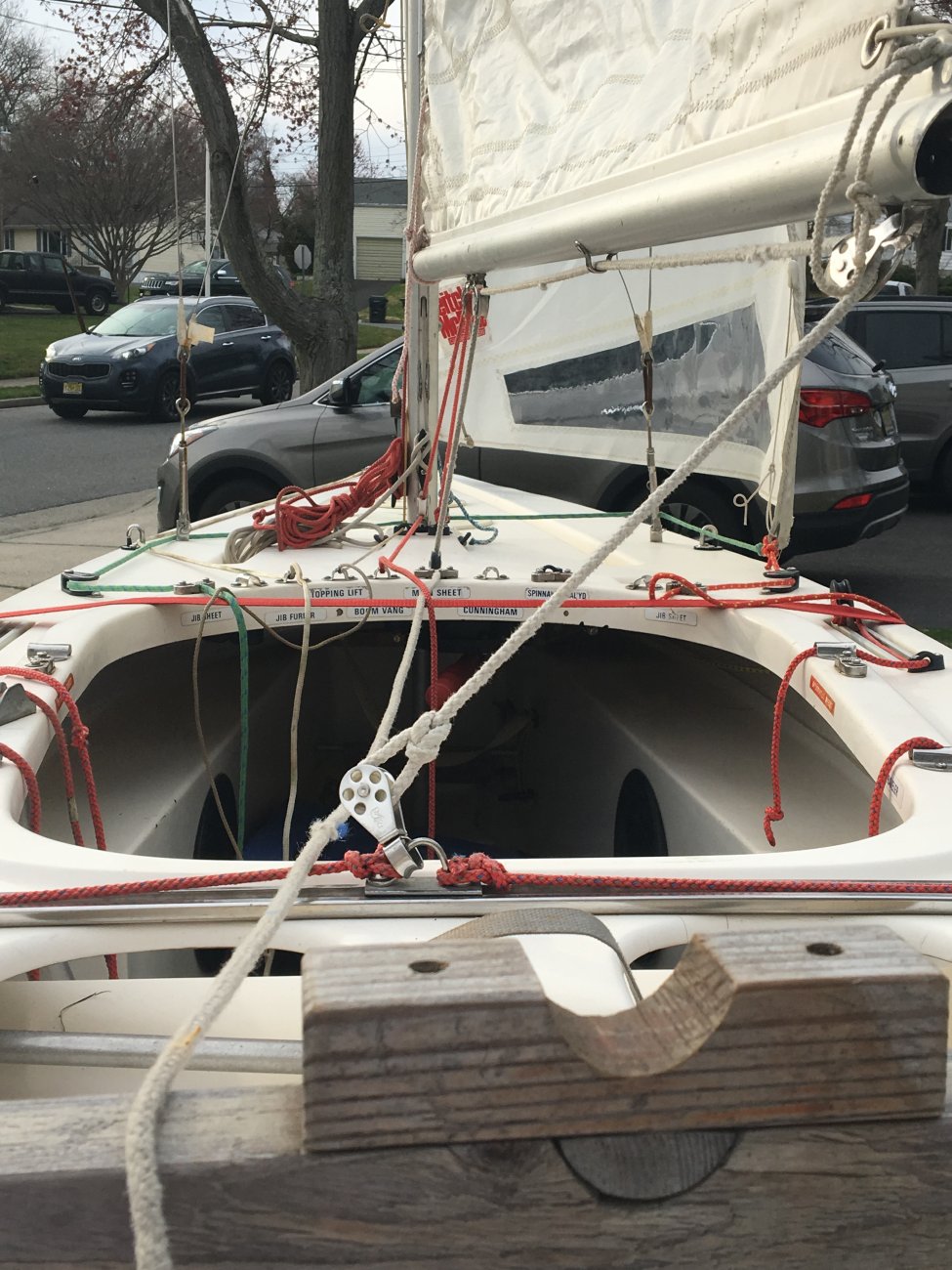 Likes: Hayden Watson and Will Gilmore

Lancer 27PS MCB Camp Pendleton KF6BL
That's cool. I like all the labels for the lines. Have you taken it out yet?
Likes: Capt Robbie

Hunter Legend 40.5 Shoreline Marina Long Beach CA
I saw quite a few running around Marina del Rey (CA) a few decades ago. Have not seen any recently, but I'm sure they are still around. Looks like a very fun boat.
Likes: Capt Robbie

Beneteau 393 Bayfield, Wi
The Lake Harriet Yacht Club here in Minneapolis has a number of them that they use for their adaptive sailing program for sailors with physical challenges. They are really cool boats and I'd love to get in one. Scroll down to the bottom of the page to get to this program.
https://www.lhycsailing.com/racing/
Likes: Will Gilmore and Capt Robbie

CAL 35 Cruiser moored EVERETT WA
Looks like it would be a fun boat.
Likes: Capt Robbie

Islander Freeport 36 Ottawa
Congratulations on your acquisition. Many years ago there were a couple of mini 12s at a local club. A friend was a member there and invited me to sail with him. We had a blast racing around the bay in them for a few hours one afternoon. The ones I sailed had a tiller in front of the seat rather than foot pedals. The tiller controlled the rudder through ropes so I can see how you could adapt either way. I believe they were set up for paraplegics without use of their legs. Very fun boats with a lot of strings to pull so they can be quite technical to race.
Likes: Capt Robbie

Beneteau First 36.7 & 260 Minneapolis MN & Bayfield WI
It a 2.4M class boat. The illusions (I think) were made in the UK. Norlin also made them in Sweden. Quite the blast. Busy slow. As Danny notes the are a good AS boat, as long as the student has the mobility to get in, and the motor control to use the controls solo. At WYC we use adapted Solings.
Likes: Capt Robbie
C

Hunter 34 Toms River Nj
Brian,
Toyed around with it last year. It's a real blast to sail.
Remarkably fast and turns on a dime. Takes a little while to get use to it. Foot pedal steering is a little strange at first.
I haven't used the spiniker yet because that halyard was not working last year. Over all this thing really is awesome to sail.

Last year had a few learning curves to work out.
One thing I did learn right out of the gate was how to launch it from the trailer.

1st attempt didn't go as planned.
Put the mast up and all the standing and running rigging up with out any issues. Removed all the tie down straps from the trailer.
Rolled it back down the ramp, so far so good. It started to float, and had to give it a little push to clear the trailer pads.
Then it slipped off the trailer and floated back about six feet.
Few seconds later it capsized and sank. I forgot to put the lead waight sin the keel, was a little top heavy.
Fortunately nobody was around to see that, but I still thought it was pretty funny nevertheless. What guy ever reads a manual.
After about an hour trying to get it floating again. Went sailing for hours, and had a blast. My wife said that I told her that I was only going to be out on the water for an hour. I was gone for two, but when I told what had happened, the one hour it took to re-float it doesn't count for my sailing time.

S2 11.0A Anacortes, WA
I think I saw a bunch of these on the hard at the Royal Vic Yacht Club outside Victoria BC..

Capt Robbie said:
What guy ever reads a manual.
Click to expand

Mini 12 meter 12 meter mini Hervey Bay
Hi,
I looking at a mini 12 mtr. on trailer. I am glad I read about the chap who launched his off the trailer fully rigged and it rolled over. I would have done the same.

CAL 35 Cruiser moored EVERETT WA
Looks like a fun boat. All the skippers looked to be wearing dry suits. Makes me think it is a wet boat to sail. With so much of the hull beneath the water and so little free board, how do you keep it afloat? It looks like it could easily become a submarine. A fun one.
C

Sh-t happens!!
I have been using it a lot more this past year. "With the ballast bags installed first". It's a real blast to sail, plus a real eye catcher on the water. Everyone I encounter on the water seem to change course just to catch a look at it.
They all seem to have the same reaction " that's awesome" can't agree more.
Takes a little getting use to, but still tons of fun to toy around in.

Hunter 34 Toms River Nj
JSsailem,
Very little freeboard, and you do get wet a lot, but that's half the fun!!
It has air tight compartments to prevent it from sinking, however you can submerge the stern. That makes it a little chalanging to get going again.
Just learned how to pump out fast

Over all still a blast to sail.

CAL 35 Cruiser moored EVERETT WA
It looks like a blast to sail. I would be up for a test sail If I found one.

Catalina 310 Quincy, MA
Thanks for the post. I would love to see this boat in the water.

CAL 35 Cruiser moored EVERETT WA
TomJ I did a google search for them today and found some YouTube Videos of the owners racing their boats. Looked a bit crazy. The foot controlled rudder looked to be touchy and would take some time to learn. The guys looked to be constantly pulling lines as they ran around the course. It looked a bit like a keystone cop movie. Not quite bumper cars but they sure were touchy with guys gybing when they appeared to be attempting to tack. More then one spinnaker wrapped around the forestay. To fly the spinnaker it looked like you hold two lines out as far as possible with your arms port and starboard, steer with your feet while holding the halyard in your teeth.

Likes: Will Gilmore and Tom J
B

Capt Robbie said:
JSsailem,
Very little freeboard, and you do get wet a lot, but that's half the fun!!
It has air tight compartments to prevent it from sinking, however you can submerge the stern. That makes it a little chalanging to get going again.
Just learned how to pump out fast

Over all still a blast to sail.

I can't wait to buy mine. We are in Queensland with a warm climate. We just wear a rash suit against the sun. I can't find any 12 mtr mini clubs or groups up here. I may be the only one so I'll have to race against Lasers. That will be fun.
You must log in or register to reply here.
Share:
Email Link
Top Bottom