Hunter 27 Annapolis
My Hunter only has single bow cleat and two stern cleats. If love to add two midship cleats for docking and spring lines, but I can't find a good place to put them. The toerail deck overlap takes up all the space that can be accessed easily from the cabin for securing nuts and washers. The quarter combing that can be accessed from below is pretty far aft.

Has anyone with a Cherubini 27 found a good solution?

Hunter 46 Point Richmond, CA
Same issue came up on this thread with a place to install it: Midship Cleat Placement | Sailboat Owners Forums

1. Use heavy backing plates. Fasten backing plate to underside of deck with 5200. Fasten the cleat to the deck with 5200. Use only through-bolts with locknuts and large ('fender') washers. This is structural, for a vital function (holding boat to dock). Don't underestimate need for strength.

3. Open-base cleats (like Herreshoff style) are most versatile. They will endure light(er) loads in the wrong alignments, such as when clipping the shackle from a whisker-pole downhaul or even a vang tackle, in a pinch. They also require four bolts and not two, which helps it in those wrong alignments.

4. Use only stainless-steel marine-grade cleats. Avoid all hardware made of chrome-plated ZAMAC (zinc/aluminum/magnesium), since, in fact, these three metals cast in an alloy are already metallurgically hating each other and the chrome plating will set up a further case of bimetallic incompatibility. Expect all ZAMAC hardware to start shedding its chrome plating after just one season. (If you doubt me, look at any motorboat and see what I mean.)

5. Midships cleats are typically used for spring lines. Spring lines are typically much longer than bow and stern lines. Consider the length of line you'd like to use (on my H25 these lines are 25-footers) and consider that they can be of a smaller line size than the bow and stern lines (mine are 3/8"; the others are 1/2"). The end lines really hold the boat fast; the spring lines keep it from sawing back and forth and causing damage to itself and to the dock (or the other vessel). Also remember there will be TWO spring lines on each side, both tied to the same cleat (unless you fit two such cleats to each side; it is often done), so choose a cleat size accordingly.

6. Remember also that wherever you do put it, you WILL hook your foot on it, often, and say loudly things which should not be said in polite company, every time; so plan accordingly for that too.
B

CC 30 South Florida
Cleats mounted on steel metal "L" brackets and bolted to the sides of the rail. 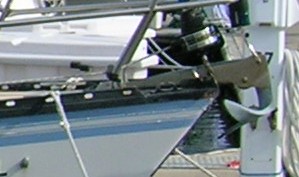 bow. That was done many years ago and don't remember many of the the details other than I had to set the roller diagonally to clear the headstay and Furler drum and as a result had to remove the large bow cleat.
M

Benny17441 said:
Cleats mounted on steel metal "L" brackets and bolted to the sides of the rail. View attachment 192796
Click to expand

That's a great idea. Were those brackets off the shelf?

Catalina 27 Mission Bay, San Diego
I picked up a pair of these mid ship cleats from Garhauer Marine a few years back($50 each). Fits on the genoa track, adjustable and really, really handy. Might not work with your boat, but it may give you inspiration.

Benny17441 said:
Cleats mounted on steel metal "L" brackets and bolted to the sides of the rail. View attachment 192796
Click to expand

This is a good idea but the L-brackets will bend (or bend the rail, which is worse).

Mounting on an aluminium box channel is better. Just requires long fully-threaded bolts through cleat, box, rail and deck (vertically - use same bolts all the way through). Be sure to put stop-nuts on the threads inside the box channel to maintain tension against the 5200 and to keep the box channel from crushing.

This is really the best way to do it to preserve the rail, provide the requisite strength, avoid leaks, and facilitate the fairest lead on the mooring line.

DianaOfBurlington said:
Fasten the cleat to the deck with 5200.
Click to expand

Please don't use 5200 to mount cleats, someone will curse you in the future if they ever need to re-seal them. Butyl tape is much better, or even 4200 if you really don't like butyl.
Read the Marine How To article before bedding deck hardware. He refers to 3M 5200 as "Satan's Glue". 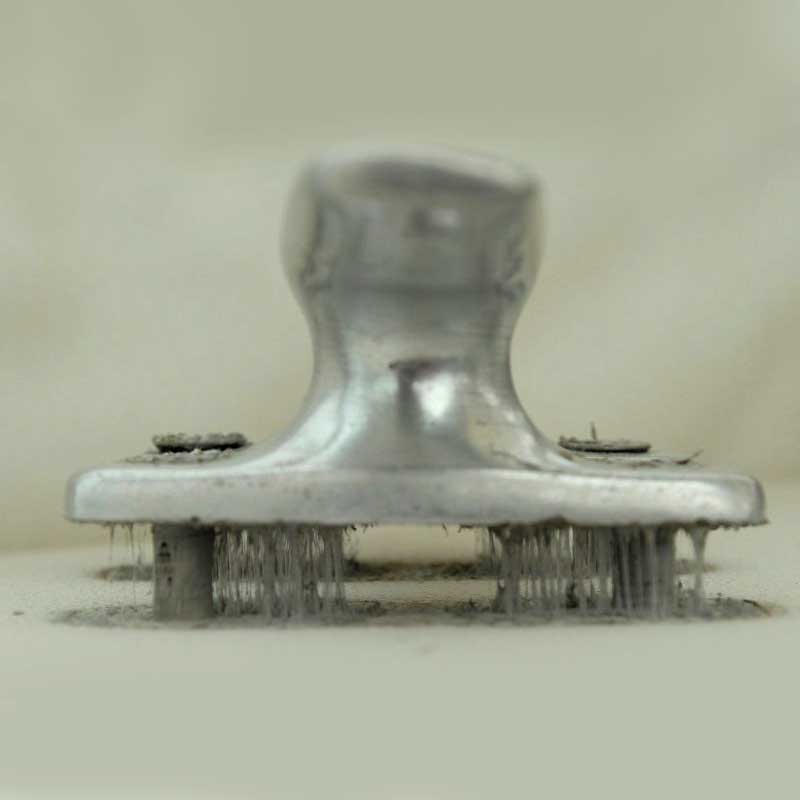 Rebedding Deck Hardware With Bed-It Butyl Tape - Marine How To

Originally published December 2003 *Moved & Edited September 2017 Countersunk/Beveled Hole Over the years, especially in the last few weeks via PM's/emails, I have been asked how I bed deck hardware with Bed-It Tape. Late one night I was in
marinehowto.com
Likes: Leeward Rail and Dalliance

Hunter 25 Burlington NJ
Butyl tape, like silicone, offers no strength in a practical sense; and cleats need to be STRONG - really the strongest thing on the boat. Rigging holds up the mast and makes the boat go. Sheet lines and halyards hold sails, which yield a great deal - more than you think. All wind loads spill off as the boat heels & drives forward. These things are not required to be as strong as mooring cleats.


Mooring cleats hold the boat itself - that’s all the weight, against all the windage, against all the elements. There is nothing needing to be stronger. I can take out the bolts and then remove a cleat or stanchion base by hand if it was put down with silicone or butyl (have done it, often). Just apply any rocking/sideways load and it pops off. That’s not my idea of ‘security’.

There are many tricks for removing 5200 easily. I’m an industry pro; and I probably know them all. I recently relocated stanchion bases on Diana that were down with 5200. Took scarcely 5 minutes each with the right tools. But I can tell you that without that focused effort they weren’t ever going anywhere.

Butyl tape is one of those ‘conveniences’ that are widely supported anecdotally but have little support technologically or in long-term practical experience. If your boat was built using butyl tape to hold down deck hardware, shame on the boatbuilder. If the end user used it....

Very similar arguments apply to silicone, in similar applications, with any edge probably going to the silicone

Islander Freeport 36 Ottawa
I agree, mooring cleats need to be very strong and your point about using 4 bolts cleats is important. I wouldn't count on the sealant to be structural however, the screws need to take the entire load. The modulus of any sealant is going to be so much lower than that of the stainless steel screws that the sealant just cannot contribute meaningfully to the strength of the joint. Even if you had the best bond between the cleat and the deck, you would just rip the gel coat off. Screws are structural, the sealant is there to keep the water out.
Likes: Leeward Rail
B

Benny17441 said:
No, they came from Home Depot. Had to measure and drill the holes in the top and sides. I also cut off triangular pieces to tapper the ends under the cleat with a hex saw. This was done to avoid scrapping anyone's feet while walking on deck. The "L" brackets fell in between the shrouds and never had any problems walking near them. I also painted the cut ends black to match the rail and protect against rust. The cleats were used exclusively for spring lines just controlling the up and down movement so stress on the actual rail was very light. There are folding cleats available to install on the rail but I thought they were overpriced and not as sturdy.
Click to expand

Benny17441 said:
The steels "L" brackets I used might crack but would not bend. Those cleats were only used for spring lines with adequate slack to control the up and down movements. Actual loads were very light and mostly close to nil. Had the boat for another 5 years after that with no problems. Them even helped the boat stay in place during three hurricanes close calls.
Click to expand

Hunter 27 Annapolis
This is all very informative. Thank you everyone. To the extent I drill into the deck just inside the toerail there seems to be a very narrow channel between the toerail and the double cabin ceiling. I'm not sure I can fit four boat cleats in that space.
Likes: DianaOfBurlington

mmlspace said:
... between the toerail and the double cabin ceiling. I'm not sure I can fit four boat cleats in that space.
Click to expand

You can fit two; then you can use a good backing plate for the inboard two.

Best tactic is to remove at least one toe rail bolt and use that hole for one of the cleat’s holes. Then you have to drill only one other hole through the toerail. Most of these toerails are down with 1/4-20 SS carriage bolts. They will bang out from underneath with no great trouble. Then be sure to seal it well with the 5200! (I use black, which can also be wiped around any places where black anodising has come off as it adheres well and looks unobjectionable.)

If you can use one backing plate that comes level with the hull’s flange and add a second, wide, thinner (1/4”?) plate to accommodate all four bolts in one plate it will contribute significantly to the strength.
You must log in or register to reply here.
Share:
Email Link
Top Bottom