O'Day 19 Littleton, NH
known as the Istanbul technique for anchoring on short scope.

Beneteau 323 Annapolis MD
It being "R" rated, they had to push Fantasy Island elsewhere in order to make the new movie.
Likes: Will Gilmore

Hunter 2008 H25 Lake Wabamun
The good Captain negotiating the narrow inlet to Mazatlan Marina. View over the cabin top is not the best on this old boat. 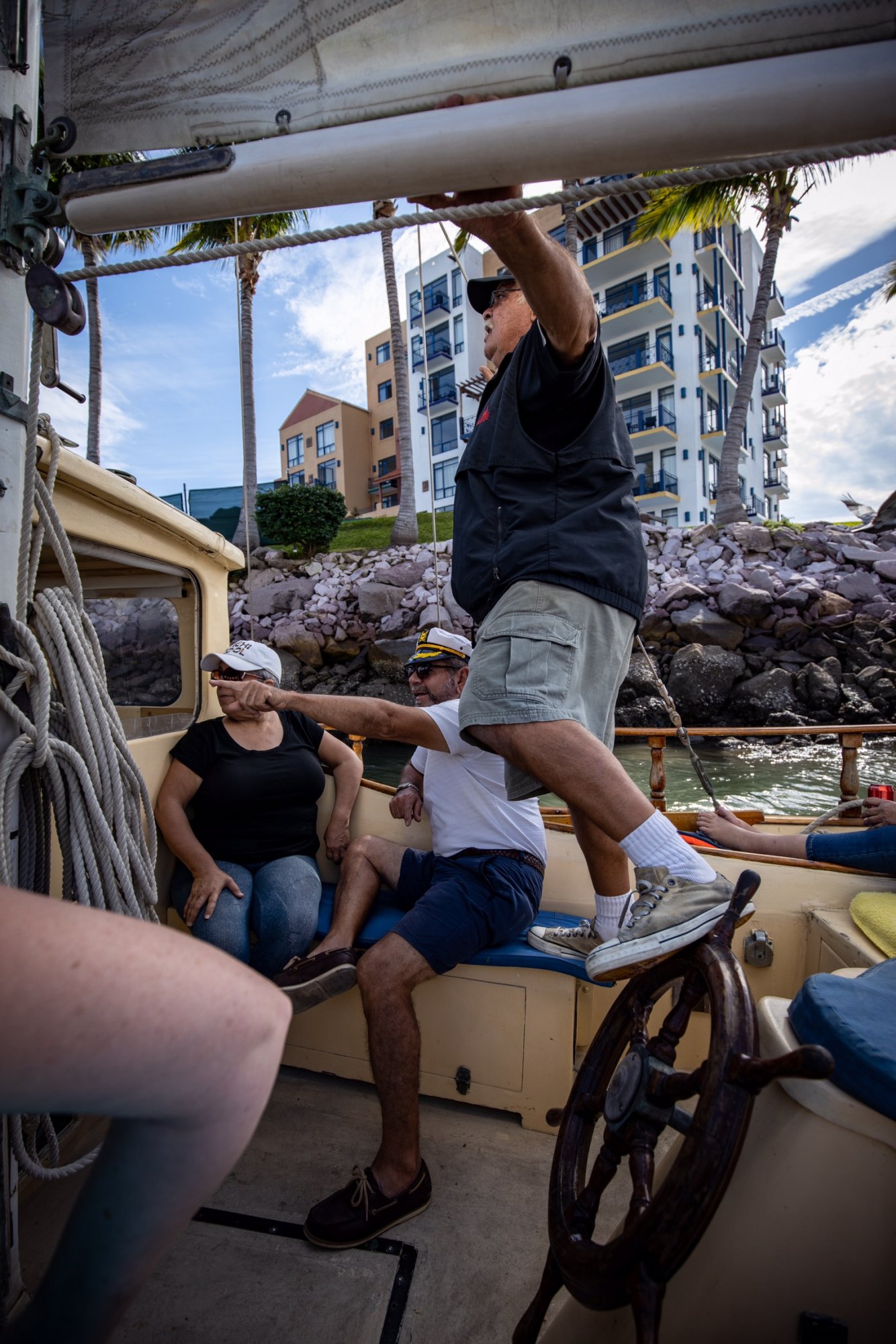 Was he reported to HR?
"Hey, I oughtta leave young thing alone"
Likes: rgranger, Will Gilmore and Captain Larry-DH

He was at home, not at work.
Likes: Justin_NSA

I often steered my Cross 35 like that- the wheel was aft in the cockpit, and I'd lean against the mizzen mast
Likes: jon hansen and AlastairLC

Noah, and Jonah and Captain John Smith,
Mariners, travelers, magazine of myth,
Sitting up in heaven, chewing and a-chawing,
Eating their tobacco, talking and a-jawing.
Sitting by a creek, spitting in the water,
Talking tall as Atlus, as saints hadn't oughter,
Lolling in the shade, baiting hooks and anglers,
Occasionally friendly, occasionally wrangling.
Noah took his halo from his old bald head
And swatted off a hopper grass and knocked it dead;
And he baited off his hook and he spoke and said,
"When I was skipper of the tight little Ark,
I used to fish for porporpise, used to fish for shark.
I have catched in a single hour on Monday
Sharks enought to feed the family anyway till Sunday,
To feed all the serpents, tigers, and the donkeys,
To feed all the zebras, the insects and monkeys,
To feed all of the varmint, bears and orillas,
To feed all the camels, cats and armidillos,
To give all the pelicans stews for their gizzards,
To feed all the owls, catamounts, and lizzards,
To feed all the humans, their babies and their nurses,
All the hound dogs and hippopotamuses,
To feed all the oxen, feed all the asses,
Feed all the bison and the little hopper grasses.
Always I catched in half an hour on Monday
All that the family could gourmandize till Sunday."
Jonah took his harp, to strum and to string her,
And Captain John Smith touched his nose with his finger.
Captain John Smith, he hemmed some and hawed some,
And he bit off a chaw and he chawed some and chawed some.
"When I was to China, when I was to Guinea,
When I was to Java and also in Virginia,
I teached all the natives how to be ambitious.
I learned them my trick of catching devil fishes,
I fitten tigers, I fitten bears,
I fitten serpents and wolves in their lairs;
I fit with wild men and hippopotamuses,
But the perilous of varmints is the octupuses.
I'd rub my forehead with phosphorescent light
And plunge into the ocean and seek them out at night.
I've catched them in grottos, I catched them in caves;
I used for to strangle them beneath the waves.
When they seen the bright light blazing on my forehead
They used to rush at me screaming something horrid,
Tentacles waving, teeth white and gnashing,
Hollering and howling, wallering and splashing.
I used to grab them as they rushed from their grots;
Crab all their legs and tie them into knots.
Noah looked at Jonah and said not a word;
But if winks made noises, a wink had been heard.
Jonah took the hook from a mudcat's middle
And strummed on the strings of his Hallelujah fiddle.
Johan gave his whiskers a backhand wipe
And cut some plug tobacco and crammed it in his pipe.
Noah and Jonal and Captain John Smith,
Fishermen and travelers, narrating myth,
Sitting up in heaven all eternity,
Fishing in the shade, contented as could be,
Spitting their tobacco in the little shaded creek,
Stopping of their yarns for to hear the ripples speak.
I hope for heaven when I think of this.
You folks down hellward, a lot of fun you'll miss!
Jonah, he duplicates the mudcat's head
And gets his pipe for drawn, and this is what he said,
"Excuse me if your stories don't excite me much,
Excuse me if I seldom agitate for such;
You think you're fishermen, I won't argue none;
I won't even tell you the half of what I done.
You had careers dangerous and checkered,
All as I will say is go and read my record.
You think you're fishermen, you think you're great.
All I ask is this, has one of you been bait?
Captain Noah, Captain John, I heard ye holler
When I asked this, has one of ye been swallowed?
It's mighty pretty fishing with little hooks and reels,
It's mighty easy fishing with little rods and creels;
It's mighty pleasant catching mudcats for your dinners,
But this here is my challenge for saints and for sinners:
Which one of ye has voyaged in a varmint's innards?
When I seen a big fish, tough as Methusulam,
I used for to dive into his ozzlie-goozilum.
When I seen the strong fish walloping like a lummox,
I used to follow them, dive into their stomach.
I could voyage and steer them, I could understand them,
I used to navigate them, I used to land them.
Don't you pester me with any more narration,
Go get famous, get a reputation."
Captain John he grinned, his hat brim beneath,
Clicked his tongue of silver on his golden teeth;
Noah, and Jonah, and Captain John Smith,
Strumming golden harps, narrating myth;
Sitting by the shallows forever and forever,
Swapping yarns and fishing in a little river.

I don't know who wrote it, but 'twernt I.

justsomeguy said:
He was at home, not at work.
Click to expand

Hunter 30T Cheney, KS
LOL. Makes me think about all those patients standing in front of the hospital with their IV poles smoking their cancer sticks. At least they have the sense to remove their oxygen.
Likes: Jim26m and Will Gilmore

O'Day 19 Littleton, NH
Nothing has been shown to filter out the Corona virus as well as a cigarette filter. 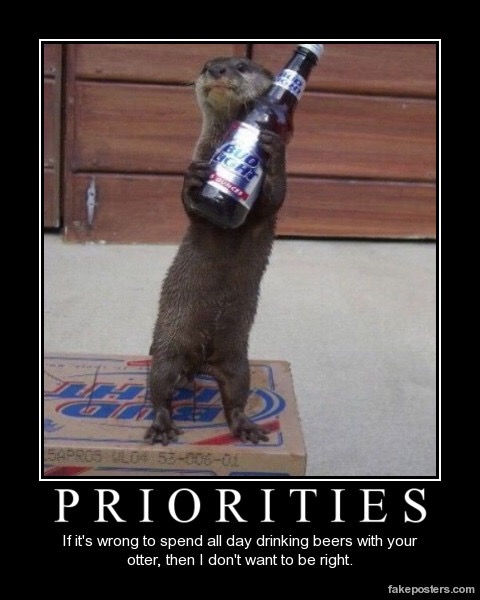 Beneteau First 38 Lyall Harbour Saturna Island
@Kermit , you obviously have too much time on your hands to surf the net. You need another boat!
Likes: Kermit and Meriachee

Michael Davis said:
You need another boat!
Click to expand

It doesn't need to be a big sailboat. 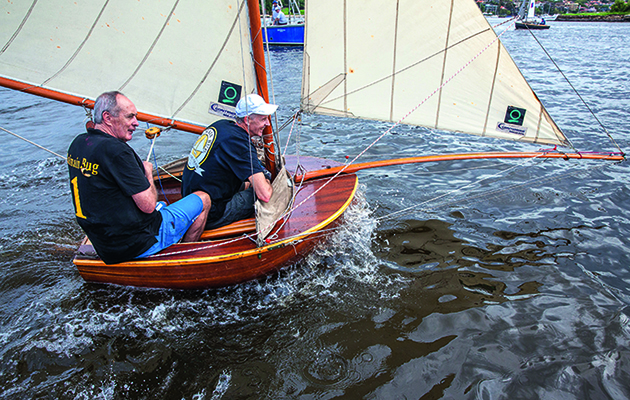 Were going to have to come to some kind of scheduling agreement there @Kermit , the beer in the fridge needs to be rotated, so we need a few days notice of your arrival to stock up.
Likes: Will Gilmore and Kermit

Hunter 30t 9805 littlecreek
Too much sail

Meriachee said:
so we need a few days notice of your arrival to stock up.
Click to expand

Kermit, be sure you notify Mariachee on payday, so he has enough money to stock appropriately.