Catalina 30 mkII - 1987 Long Beach Shoreline Marina
Stu, let me go back to the antifreeze subject one more time, because that's making my head spin. I know how to drain and refill my antifreeze, in fact I did just that a couple days ago. But why would there be any anti-freeze in the exhaust pipe? That's what I don't get.
Isn't it just an engine exhaust pipe with an elbow that the raw water dumps into? Where is the anti-freeze?
I am not understanding this statement about how undoing the exhaust pipe will dump anti-freeze out of the engine.... unless there's some fundamental thing I don't know about yet... So, please explain!

As for the dead horse, I get it. I do! What if I pulled off the raw water hose to elbow and shoved a camera up there? Would that check it enough? What if I stuck one of these in there?

LeslieTroyer said:
The exhaust manifold doubles as a coolant tank. The gasket and exhaust adapter keep the coolant in the tank and the exhaust separate.
Click to expand

THANK YOU. That is what I didn't understand. So, if I didn't pull that flange adapter off the motor, anti-freeze stays in.
I am seriously thinking of just getting cheap endoscopic camera and putting it through the raw water inlet and see if I can see anything in there. Has anyone tried that?

Catalina 36 MK1 94 Everett, WA
The square is exhaust, the other outline on the gasket is antifreeze containment. On most elbow coking I’ve seen occurs in the elbow which is above the water inlet. I doubt you could get borescope to do a 180. 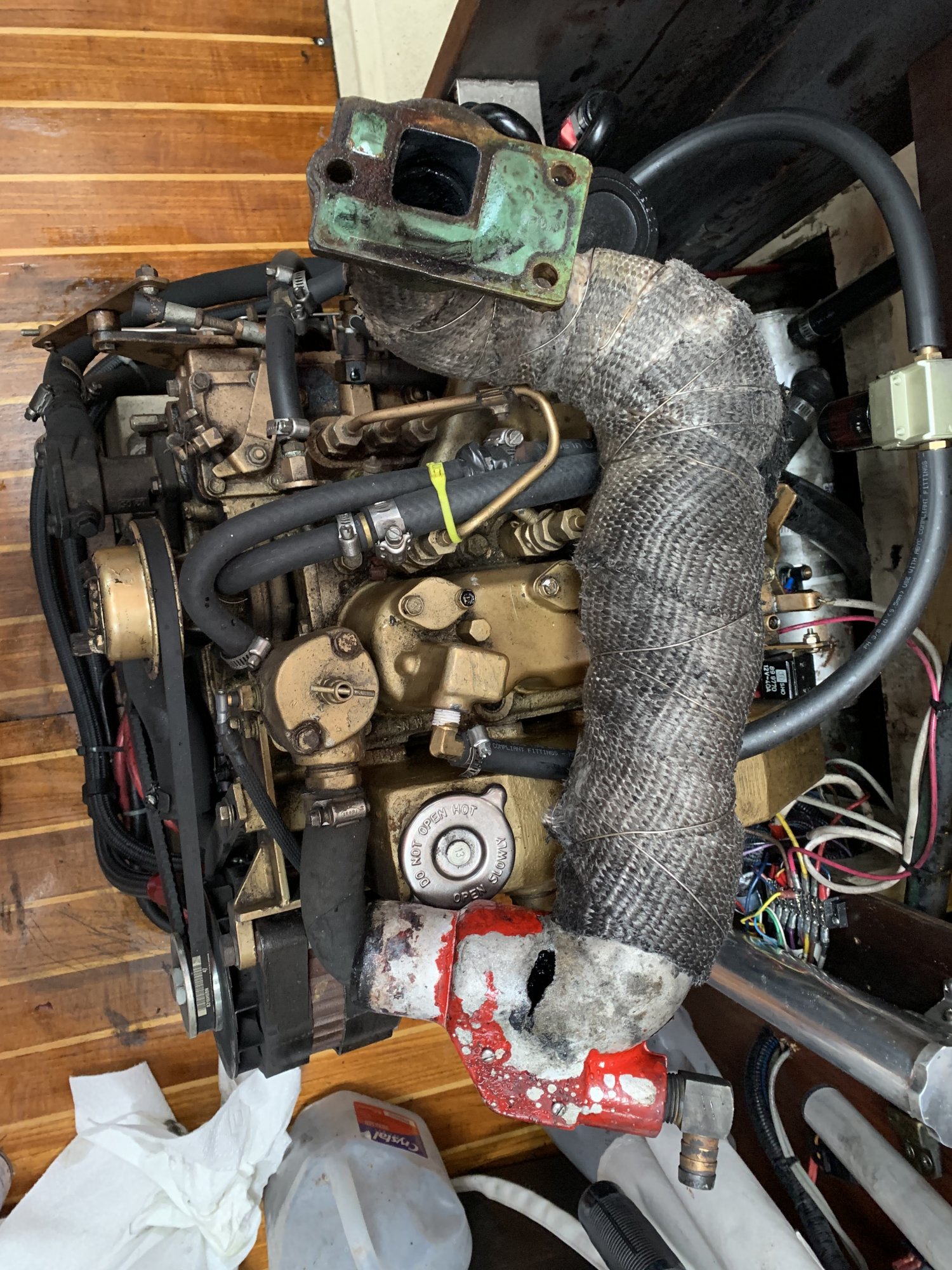 Catalina 30 mkII - 1987 Long Beach Shoreline Marina
I ordered a waterproof wireless borescope anyway because I can think of a ton of cool uses for it even if it doesn't help me here.
Is it possible to remove only the hump hose coupler to inspect it from that end? I'm trying to think of the most minimal work to at least inspect this to know if I have to tear it apart or if it looks okay and I need to look elsewhere.
Based on all your wonderful input, I'm guessing I should pull the raw water hose off and inspect that junction first, and if I can pull the hump hose out, maybe I can inspect the rest of it with minimal fuss to determine if I need to go further?
Last edited: Jan 28, 2020

Catalina 34 224 Maple Bay, BC, Canada
Sure you can, if you can physically. Les' picture is of his C36 exhaust riser. Here's mine: 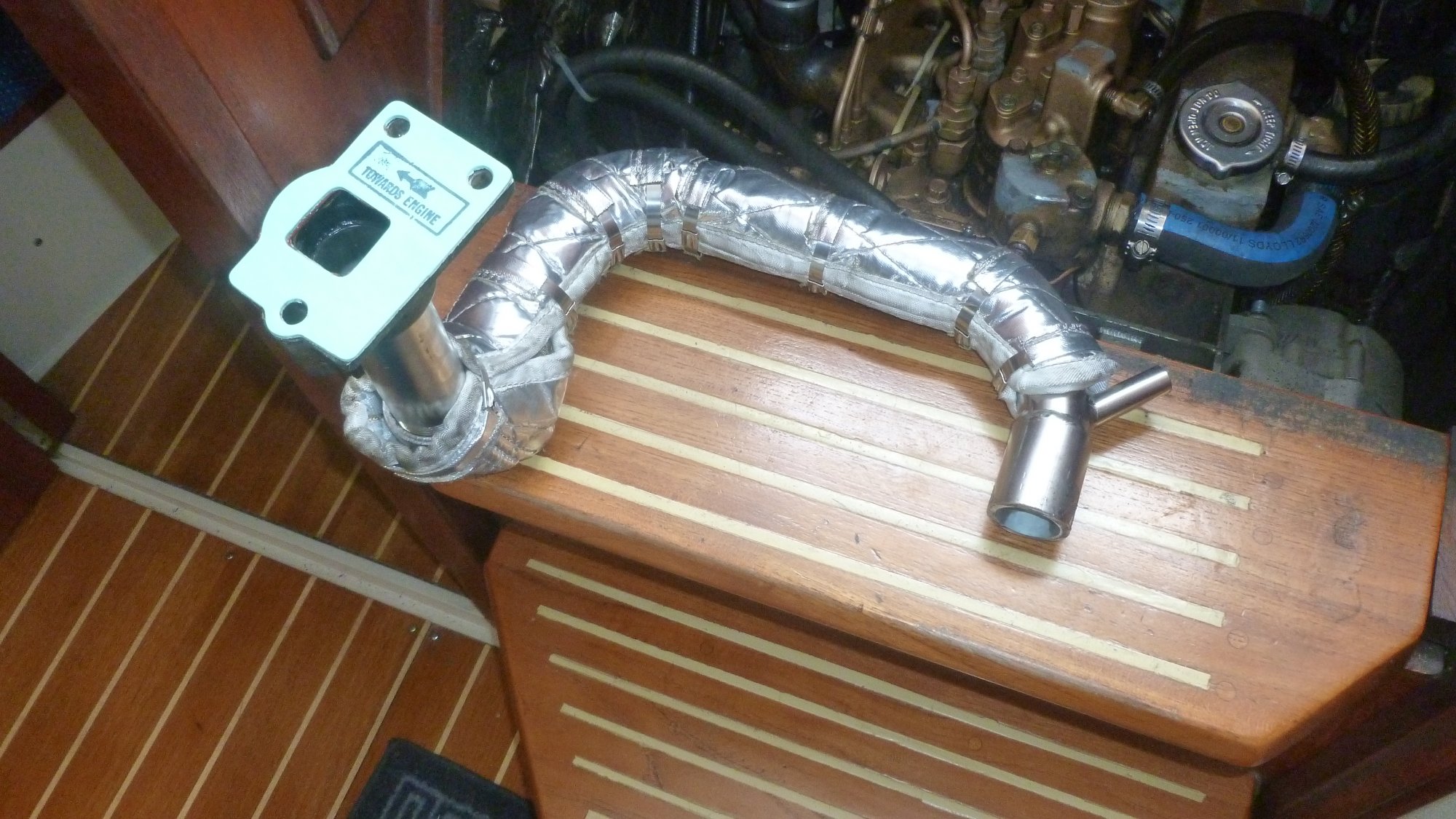 If you re-read the text of my earlier long post, you'll identify the bits & pieces of each of the sections you asked about.

Good luck, but I'll say it again: because of the way these risers work with the water injection nipple, it is RARELY (if ever and I haven't heard of one) that the joint gets "coked up" rather the metal disintegrates from within at the joint. I've seen a half dozen (including mine) and heard of about two dozen more in my position as C34 secretary.
That friend who set out and didn't make it? His story convinced another member with a hull earlier than mine (also 1986) to replace his even though his hadn't failed yet - and I'd replaced mine once or twice already!!!

Catalina 30 mkII - 1987 Long Beach Shoreline Marina
Thanks Stu, you're advice is always one of the best out there. I have to travel for a week, so I won't be revisiting this thread for a little while until I get to the actual parts and report back. Thanks again everyone.

Catalina 30 mkII - 1987 Long Beach Shoreline Marina
Found this at Moyer Marine. Looks like the one part you’d need if doing the rest diy. Catalina 30 mkII - 1987 Long Beach Shoreline Marina
I finally got the galley counter out. It wasn’t easy to slide it out. 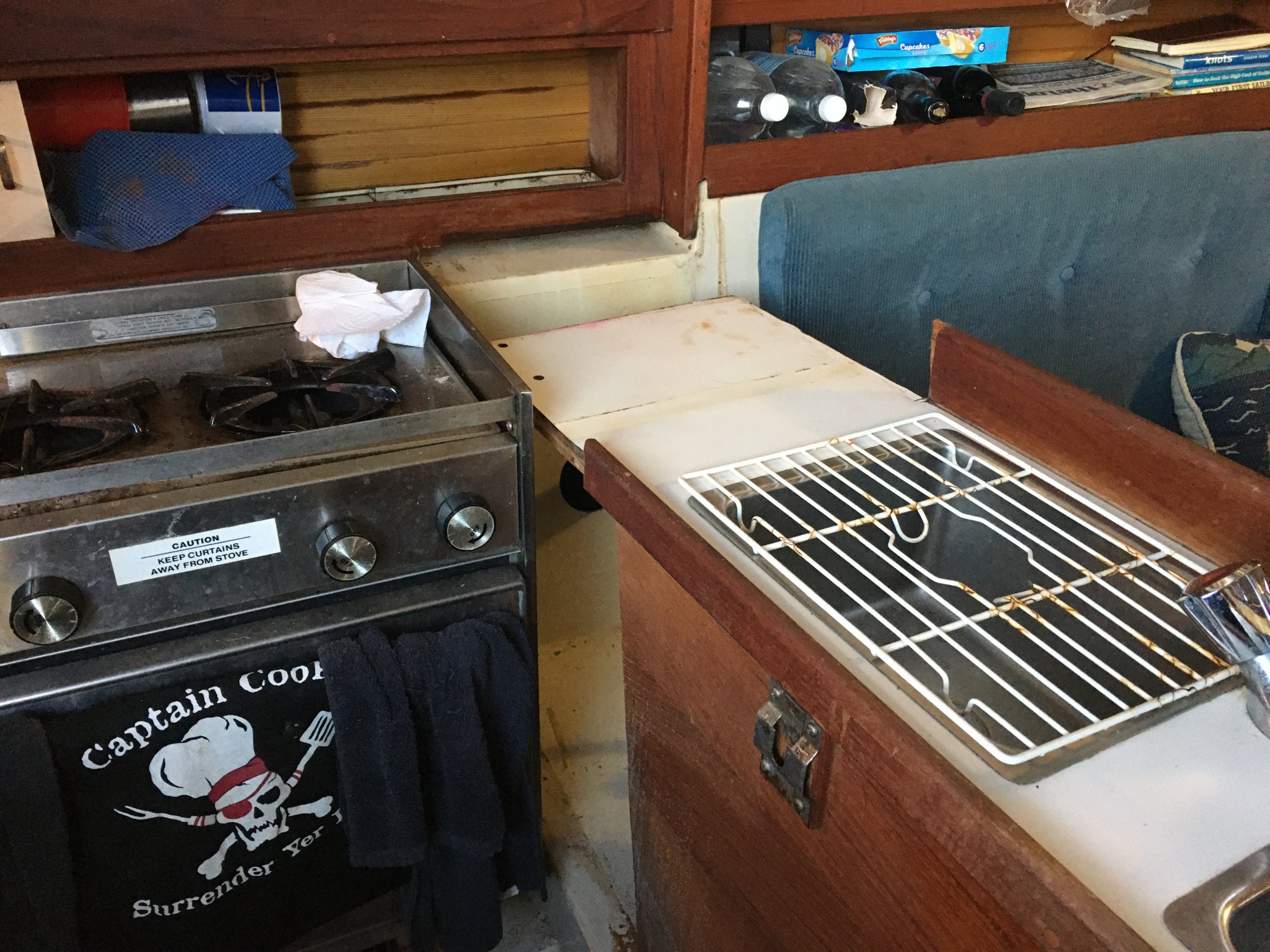 Here’s what I’ve got: My new endoscope fit just inside the inlet without the tip attachments. So this is a little inspection video. I noticed a lot of black soot just above the inlet. You can see in the video.

My next task will be to remove the entire riser. Not happening today though.

Catalina 30 mkII - 1987 Long Beach Shoreline Marina
Question @Stu Jackson , This is the black soot that I can see quite a bit of. When I put my hand there to pull the water hose, my hand was covered in black soot. So, following your previous comments, you said that almost always, that's exactly where they fail, right?
Secondly, if this is all as you suspected, would this cause my low power issue? I'm going to replace the exhaust riser anyway now, but my question is, do you think this could directly be the cause of low power and likely correct it if replaced? Catalina 30 mkII - 1987 Long Beach Shoreline Marina
One more thing... I would like to pull off the Exhaust Elbow soon, maybe in the next couple of days and I won't be able to replace it for another week or two until I've got all of the needed parts. Any special tips I wouldn't have necessarily thought on my own so I don't sink my boat accidentally?
Is it safe to leave the Exhaust/Muffler connection wide open while I'm not there for an extended period? Obviously, I've already got all my thru hulls closed and keep them closed when I'm not there.

jonelli said:
So, following your previous comments, you said that almost always, that's exactly where they fail, right?
Click to expand


jonelli said:
would this cause my low power issue?
Click to expand

Don't know, can't make conjecture out of what could be a myriad of other issues: bottom, prop, etc.


jonelli said:
Any special tips I wouldn't have necessarily thought on my own so I don't sink my boat accidentally?
Click to expand

Nothing that would sink your boat. I gave you all my tips & tricks in the loong post I made on page one of this thread, #8. While you're in there, replace the flapper on the vented loop, or at least clean it.
Likes: jonelli

Catalina 30 mkII - 1987 Long Beach Shoreline Marina
Hi All, I just discovered that Captains Locker in Alamitos Bay apparently carries all the parts to replace the exhaust including the water inlet part. I guess it helps to call around locally first! LOL.
BUT! The guy there told me it’s all galvanized pipe material. I did not question him but as many have said NOT to use galvanized pipe because toxicity when heated, should I assume the guy was wrong and it is not likely galvanized metal parts they carry? My gut tells me that it isn’t likely galvanized because if they sell a pipe nipple with a welded inlet, then it can’t be? My welding friends tell me that you can’t weld galvanized pipe.
I also have to assume the parts they carry must be suitable since they probably supply tons of people with these same engines all around here.
They also said it was 1.25” pipe material. I haven’t checked mine yet but the Moyer Marine guys thought only the Atomc 4 used 1.25” pipe and our diesels use 1.5” pipe.
I will unwrap my elbow this weekend and decide what to do then.
Any more comments are appreciated.

Catalina 36 MK1 94 Everett, WA
It should be black iron pipe. You don’t want to poison yourself slowly if you use galvanized — I wouldn’t assume it ok.

Catalina 30 mkII - 1987 Long Beach Shoreline Marina
So, what do you guys think? Do I still need to replace this exhaust elbow? 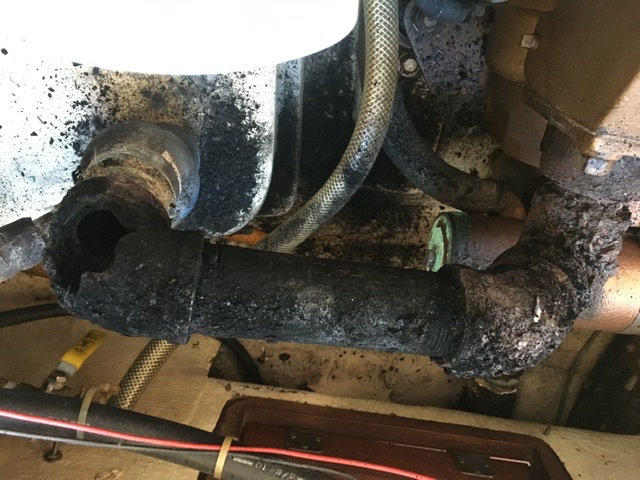 That looks to be similar construction to the one I replaced on my C&C27, black iron pipe. Measure it up and head to your neighborhood plumbing store. See if you can find an off the shelf water injection nipple to fit. If not, I made mine by drilling and tapping a pipe thread into a standard pipe, you could also braze it. Not ideal but it worked.

Catalina 34 224 Maple Bay, BC, Canada
Now you know. Good on you for going that far. Pretty close to the injection point right? And while we're being finnicky: what you have on your boat is an exhaust riser; exhaust elbows are a part found on Yanmar engines. Good luck cobbling together or buying a replacement.

This may help, I believe there may be other sources: My local Marine parts store in the marina had this. I know it was cheaper online but I want to support the local business and I was happy he had it. It was $100
I’ll have to cut it down a bit and go find the rest of the parts now.

Catalina 30 mkII - 1987 Long Beach Shoreline Marina
Hey @Stu Jackson should I paint the iron pipes that I make this out of? The universal piece is painted silver. How hot does it get? Can I use engine paint?

jonelli said:
Hey @Stu Jackson should I paint the iron pipes that I make this out of? The universal piece is painted silver. How hot does it get? Can I use engine paint?
Click to expand

Why paint something you're gonna enclose with insulation. Waste of time & $$.
Hot. Very hot. Ever touch your hot water after motoring for hours? C'mon, really, or just pullin' my chain? (Not that hard to do...).

Catalina 30 mkII - 1987 Long Beach Shoreline Marina
I didn’t know if it would help with corrosion it wasnt for looks!!
You must log in or register to reply here.
Share:
Facebook Twitter Email Link
Top Bottom