Catalina 275 Wilmette, IL
Since the Yanmar SD20 saildrive is a major component of the C275, I thought I would create a separate thread. Probably should have done it when the upside-down-engineered pin fell out (see problems).

Thought I would address an item that most people are not aware of and should be on everyone's radar, especially for us freshwater sailors. This item is the internal anode in the saildrive. It is located on the port side of the saildrive opposite of the water intake. 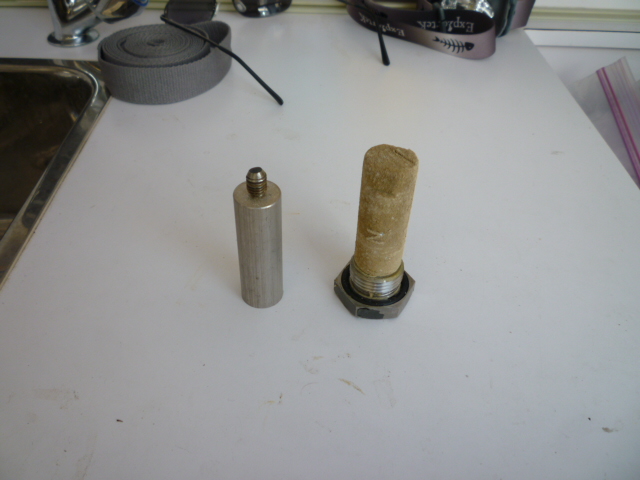 The anode bolt has this warning sticker on it, which is very hard to see because of the starboard only access: 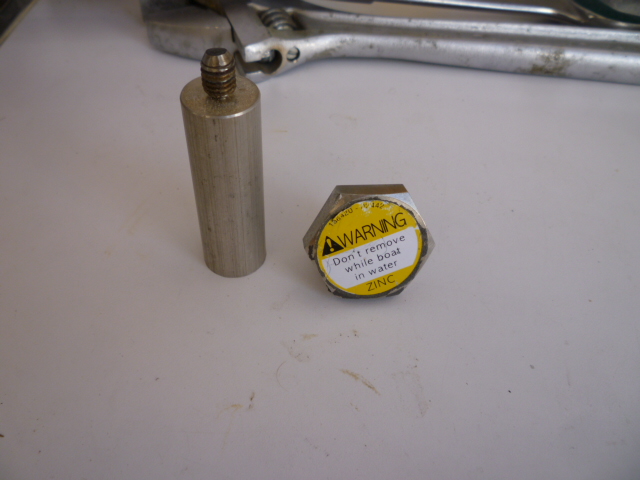 I think the head is 32mm, but I was able to use a 1-1/4" wrench. I had trouble with the box end, but the open end worked fine. It is possible because of working in the blind, I had interference or an alignment problem with the box end. Also remember that you are working from the opposite side and lefty-loosey is reversed.

As expected, because I'm fresh water, there is no deterioration of the anode. The replacement is magnesium, so it will be interesting to see what it looks like after use. Fortunately, I've been 200+' from the nearest shore power, so it has not been as critical, but I wish the dealer had told me about this. To his credit, he did swap out at no cost the prop-shaft's anode for magnesium before its initial launch. I was unaware magnesium is needed for fresh water.

I've been buying my zincs from boatzincs which carries magnesium anodes as well. The part number for the internal anode is 27210-200550. The prop-shaft anode is 196440-02660. For freshwater magnesium, postfix a "M" (without quotes) to the part number.

I've been also shining up the prop-shaft anode every spring. Sandpaper is a bit of a pain and this year used a wire wheel on a drill, which worked much better. I would recommend putting on a couple of layers of blue tape on the drive as to not knick the paint. I'll probably do the same for the internal, even though it is a little inconvenient.
Likes: drewlamparello
F

Catalina 275 Sport Grapevine
I have a contract on a 275 that is currently in salt water and I will be putting it on a fresh water lake. Do I need to change the anodes to magnesium?

Are these the only two?

Catalina 275 Wilmette, IL
Yes, you will have to change to magnesium and these are the only two that I know of on a SD20. I really can't see there being anymore. And an advanced welcome to the C275 group.
F

Catalina 275 Sport Grapevine
Thanks, I’m sure I will have a lot more questions.

Catalina 275 Coffs Harbour
Our boat is 5 years old (I've owned it for 4 months), the engine has done 220 hours and I have no idea of the state of the upper gear case anode. The manual says it should be replaced every 100 hours, but the boat must be out of the water to remove it. The haul-out facility at our marina is closed for 6 months (at least), so my only option is to sail 65NM up the coast to have it done there. Is it worth it, or should I risk waiting another 6 months? I know there is no definitive answer to this, but opinions are welcome.

Catalina 275 Wilmette, IL
Can't say if replacement is critical or not. Much depends on how much stray electrical current the previous owner and yourself was/is experiencing. No one has chimed in on replacing theirs accept for me and my experience is not useful because I had a saltwater anode in freshwater, as well as being 200' from shore power. How's the anode by the prop looking? And how many times did the previous owner replace that? If you can get the answers to those two questions, it may help you make your decision.

Whatever you do, take a photo of the old anode and post so we can see what a 5+ year old internal anode looks like.

1057
I had mine pulled out November 2019 when I acquired it as a 30 month old boat with 340 hrs on the engine. The Internal sill had more than half left back then. Plus it had been sitting on a mooring ball. Now I'm in a slip so I'm keeping my fingers crossed as I don't want to haul out until 2022. I'll gauge if I can wait till then by the comments from that driver gives me each month on the outside Zink, so far he is reporting its good...

Catalina 275 Coffs Harbour
Thanks for your comments. According to the diver who cleaned the hull a few weeks ago the external anode is fine. I think stray electrical current would not have been an issue with the previous owner as he was on a private mooring. I assume time in water is more important than engine hours, so in that respect I might be getting close as it's never been out of the water for more than a few days.

Catalina 275 Coffs Harbour
I had the engine serviced by our local Yanmar dealer and asked him about the internal anode. He said he'd never seen any loss on those anodes and had never had to replace one. He sad as long as the external anode is replaced regularly I need not worry about it. I'll still check it at next haul out and post here.

Catalina 275 Coffs Harbour
I had the boat out last week and checked the internal anode and it looked OK to me. Some loss visible but not worth replacing. The prop anode however definitely needed replacing.

Catalina 275 Wilmette, IL
Your internal had more wear than mine which had the wrong alloy for freshwater. But your external probably could have been replaced sooner. Before you re-use the internal, I'd take a wire brush on a drill and shine it up a bit.

Catalina 275 Coffs Harbour
Sadly it's too late to clean it up as we've been back in the water for a week. Maybe next time. I had to put the worn external one back on as it took a week to source a new one. Just had a diver replace it this morning, the old one broke in 2 when he removed it, so good to have that done.
You must log in or register to reply here.
Share:
Email Link
Top Bottom