Can I connect solar mppt to ANL fuse holder on battery side before fuse (as it will have its own fuse in line within a couple inches)?

Can I connect ACR to ANL fuse holder on non-battery side (after fuse) as it will use same size wire as the main feed?

Thanks for insight....Dave - Tampa Bay

Catalina 310 Hingham, MA
You need to come up with a wiring diagram. Otherwise it will get confusing. As an example, this is what I had when I was planning my original install. 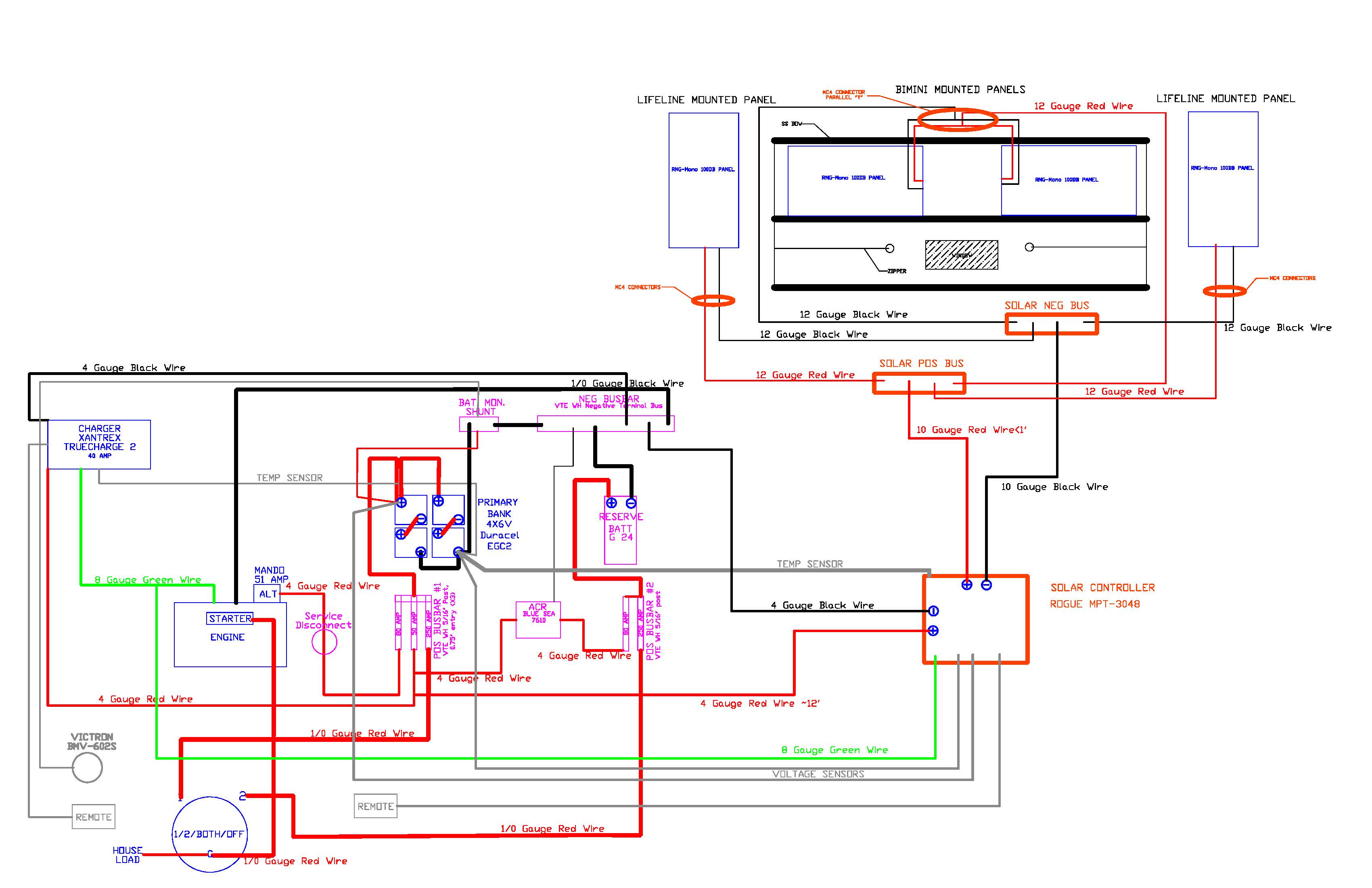 Some questions that might help make some things more clear:
Good luck and fair winds,

Catalina 309 Tampa
Hey thanks Jesse for the comments. My question could have been stated a bit simpler, is it ok to put a second connection on the terminal posts of the ANL fuse holders?

I get your questions for better understanding the full project and appreciate the advice so let me answer some of them.

Blue sea charger is shore power charger. Yes it works with the ACR and will open the relay when charging. Yes, each line currently attached to the batt positives are different gauges and each has separate fuses.
Solar controller is Rich Solar 20amp mppt connected to batt #1 (house).

Alternator has not been modified from original. So as I understand, in #1 position (my usual mode), both solar and alt will be changing batt1.

We don't do much motoring, but every other week or so, I start the engine on #2 to validate reserve batt.

Depending on the voltage, it will either combine or not.

Catalina 310 Hingham, MA
As usual, Mainesail has a great write up on what ACR are and how they work. I strongly suggest you read that article. In short they are voltage sensative relays. If either battery has a charge voltage over 13 volts for 90 seconds or 13.6 for 30 seconds the ACR puts the batteries in parallel just like turning your battery switch to BOTH.

So if you have solar feeding the 4D, once the voltage is above 13 they will be combined and charging. When you plug into shore power, same thing. And when you run the alternator, again the same. So if you are on a mooring, when the sun gets high enough to start pumping some good solar into the 4D, it will combine the batteries and start charging the group 31 as well. When the sun goes down it will disconnect the batteries. Its just like if you were on the boat and turned it to both when you saw the solar was charging and back to Bank 1 when it was not.

The factory setup for your alternator is that the charge goes through the battery switch. So if Bank 1 is selected, it goes there. The ACR would then combine the banks and you would charge both. But you could make the charging more efficient by having the alternator output run directly to Bank 1 and adding a ground connected to your grounding lug instead of relying on grounding through the body of the alternator. But this can be a future upgrade.

Another consideration is the shore power charger. I would personally disconnect the line running from the charger to Bank 2 (Group 31) and just let the ACR handle the charging of that Bank. This wire could then be repurposed for your feed from the MPPT to Bank 1.

Now one thing to consider is that you may not want them to have the same charge profiles. Even if both batteries are the same chemistry, they might not have the same bulk, absorbtion and float voltages. In this case the Sterling Battery to Battery charger might be a better option. Mainesail has an article about that too.

Back to your main question. If you use the same size wire as the feeds to the banks, 2/0 AWG, then it is fine to use the same ANL fuse as you already installed.

On the solar controller, if you have not purchased it already or you can return it, I would consider spending a few dollars more and getting the Vicrton SmartSolar 100/20 (not the BlueSolar, the SmartSolar has built in Bluetooth). Not as good as some others like Midnight KID or Outback but much better than the majority of the cheap ones on Amazon.

Catalina 34 Casco Bay
I would strongly suggest that you add a battery selector switch that does NOT have a " Both or 1&2" option. This selector has 1, 2 and OFF. Segregate the solar from the shore charging system. With the above type of switch you can guarantee that you will either be charging from solar or shore without back feed or cross over..
A switch for each battery bank.. Cheap money for system management and insurance....
D

Catalina 309 Tampa
Hey guys, thanks for the comments. Yes I read Maine's excellent article on ACR, that's where I realized I can use the main fuse to protect the ACR wire as I'll be using same gauge of wire.

Can I connect solar mppt to ANL fuse holder on battery side before fuse (as it will have its own fuse in line within a couple inches)?

Can I connect ACR to ANL fuse holder on non-battery side (after fuse) as it will use same size wire as the main feed?

Just adding wires to existing lugs adds to the confusion. Consider adding a positive bus bar to which the ACR, Solar, charger, and main feed all have separate fuses with only one connection per lug. Somewhere on MS's site there is an article and photo of this arrangement. The attached photo is my interpretation of his bus bar.

With this setup, there is one connection from the alternator, charger, ACR on the bus bar. The start battery is charged through the ACR, from either the charger or alternator, which ever one is operating. The ACR prevents the house battery from discharging in to the start battery.

On the Positive battery lug there are 3 connections, the main cable to the bus bar and 2 sense wires, one for the Smartgauge and one for the Victron Battery Monitor. (The photo shows a 3rd wire which has been moved, it was the regulator sense wire). The second photo shows the top of the battery bank. The negative post has the main negative cable going to a negative bus, a temp sensor for the charger, the smart gauge negative and one other negative that I need to label confused.

Catalina 309 Tampa
Dlochner, thanks for the comments. The buss-bar would be a good idea and will organize things. I'll go that route....

dave_and_dd said:
Dlochner, thanks for the comments. The buss-bar would be a good idea and will organize things. I'll go that route....

Only way to go! 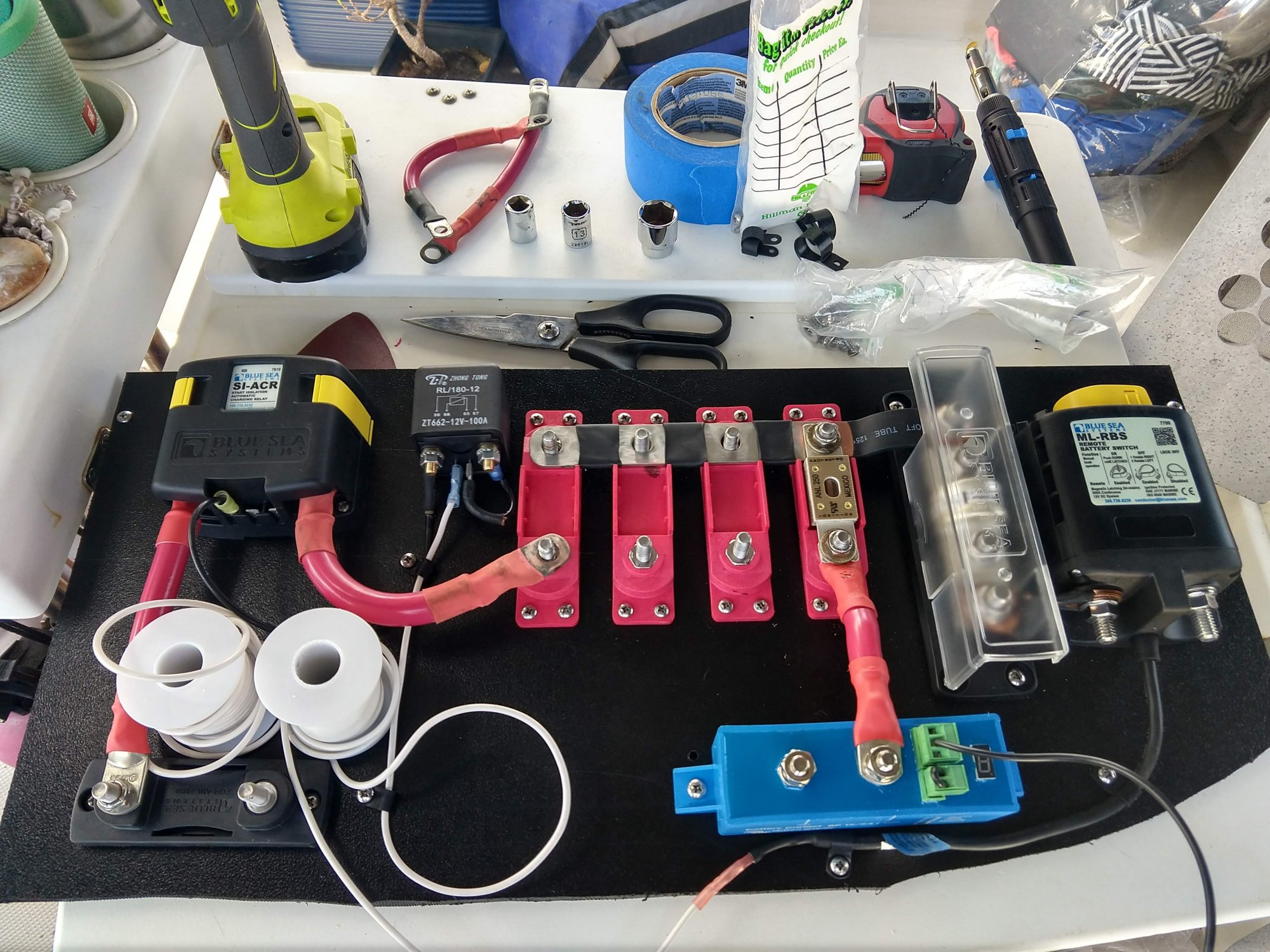