What to look for when buying a Tartan 41?

Beneteau 381 Midland, Ontario
Hi all.
Family is ready to trade up to larger performance cruiser and there is a 2001 we will viewing soon. Anything in particular I should ask the broker about this model? eg. issue with motor mounts? deck delamination? replacing original stock equipment like fridge or hot water heater?
Lovely boat, just want to have a heads up if there are any bogeys.
Thanks.
Greg

CAL 35 Cruiser moored EVERETT WA
Greg... Congrats on your plans to step up.

Your 2001 is 20 years old. If the boat has OEM equipment you may plan for replacement soon if not immediately. 20 years on the standing rigging, chainplates, and mast hard ware may also be at their life expectancy. Unless you can assure yourself that all the hoses and thru hulls have recently been replaced, I would expect that is another project to greet you.

As is always the case, examine corrosion and condition of electrical systems. 20 year old electronics may be working but often it is the first to go and new installed. If the wires are a rats nest you may be exploring the art of electrical wiring.

On a 20 year old auxiliary motor I would expect still a lot of life, unless the maintenance has been ignored.

After 20 years sails are likely stretched.

If you are thinking local sailing then your might let a little slide. If you are considering an ocean passage to the Caribbean, then you need to be thorough and expect to spend again as much as the boat costs making it ready for such a passage.

GMAC Greg McKenzie said:
Hi all.
Family is ready to trade up to larger performance cruiser and there is a 2001 we will viewing soon. Anything in particular I should ask the broker about this model? eg. issue with motor mounts? deck delamination? replacing original stock equipment like fridge or hot water heater?
Lovely boat, just want to have a heads up if there are any bogeys.
Thanks.
Greg
Click to expand

They are truly a beautiful boat. However, be aware she carries a big rig with large sails. A friend of mine owned a 41 (assuming yours is the 4100) back in the 80's. Flag blue hull, a beautiful yacht. However she was just too much to handle for my friend and wife, so they sold her after 2 seasons. I imagine the 4100 also carries a large rig as her predecessor. Just something to think about.......
Likes: Justin_NSA

Bavaria 38E Alamitos Bay
The Tartans are beautiful yachts that I’ve admired for the past 30 yr. Good turns of speed. But when I’ve been on them, they have shown less than expected. No experience with the 4100, but some with the 3400, 3500, and 3700. We did a week charter on the 3400 (2005 model, two cabin) in the SJ’s last year. It simply was not well apportioned below in our opinion. We thought a very clumsy galley arrangement with little working area. A tiny head for a 34; seacock valves in ridiculously inaccessible spots, etc. A difficult-to-use anchoring set-up where the anchor was evidently prone to slam the bow on recovery and deployment, etc. Laid well and comfortably at anchor, nevertheless. Poor storage. Comfortable sleeping arrangement once prone, but tight. So Admiral and I stayed in the separate cabins.

The 3500 (a late 1990’s model), also not well apportioned below. The galley & salon combination simply not arranged well for dining/entertaining with folks aboard. Low quality material in the doors, thin. Fast and comfortable on deck when sailing, but below the joinery creaked like I not heard before. Also, I question the efficacy of the Solent design of the headsails. Difficult to use if much tacking is needed.

The 3700, don’t know the year, was two slips from me for several months and I met the “newbie” owner, just divorced. Don’t recall what exactly, but he worked below on the boat a lot. There were some issues but not enough to keep the yacht in port. We did a tandem cruise to Santa Barbara Island from Ventura, about 45 n.mi., anchoring three nights & rendezvousing there with the 3500. She stayed reasonably close to us motoring and then sailing on the afternoon wind. The yacht lay well at anchor, and the crew offered no negative remarks on the boat that I recall. Nevertheless, she appeared not to have been well maintained by previous owners, so deterioration was evident in the hull finish, life lines, and generally on deck. Cockpit was very roomy and comfortable, however. Gave the impression of a well-found yacht although I think too much for one’s first boat. But he did sail it with two more crew to Cabo San Lucas later that year in the Baja Haha. I and one other helped him try out a new asymmetrical for that trip in the swelly waters off Ventura. Good working space on the foredeck, and she sailed well. A delivery skipper brought it home and we heard from one of the crew that it had gotten pretty beaten up, etc. I would heed the comment about being a lot of boat in the 4100 for a couple but at least experienced ones in your case.

I would suggest that if you offer, your sea trial take place in 12-15 kt of wind where you can get the boat sailing in open water with everything up. A motor-sail tootle around the harbor on a light day, or sailing in light air, could deceive you, etc. I took two racing friends with me and Admiral. Got the chute up and down in 15 kt; did some tacks and gybes out past the harbor breakwater, etc. Good trial; learned a lot.
Last edited: Apr 9, 2021
Likes: Justin_NSA and jssailem

CAL 35 Cruiser moored EVERETT WA
I thought of you as I read your review. We had a nice time in the cockpit, sipping rum and exploring our sailing adventures. Able to "socially distance" yet not have to shout. Way back in early covid days.

She was a pretty boat at anchor in Park Bay, San Juan Islands. 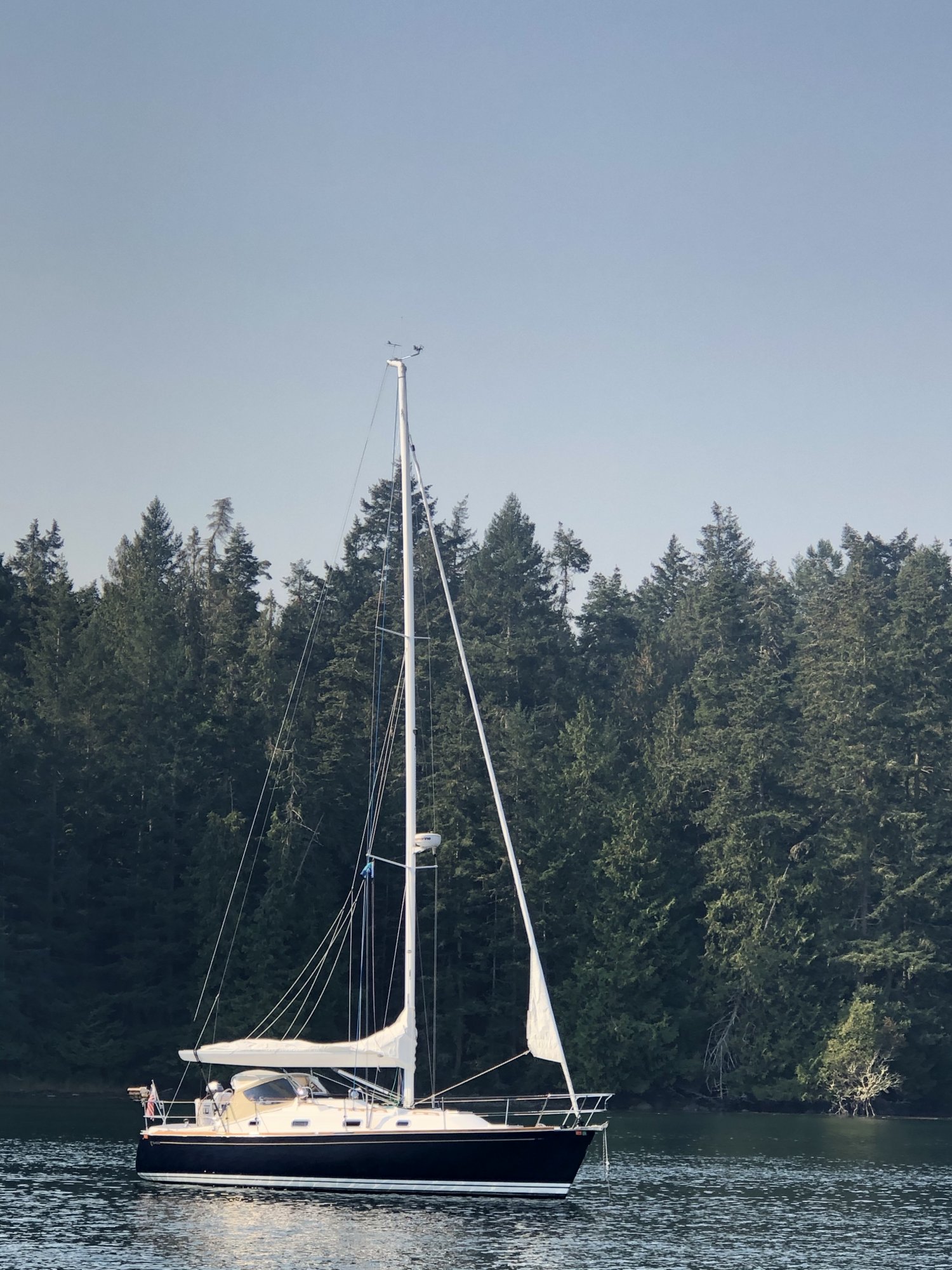 GMAC Greg McKenzie said:
Hi all.
Family is ready to trade up to larger performance cruiser and there is a 2001 we will viewing soon. Anything in particular I should ask the broker about this model? eg. issue with motor mounts? deck delamination? replacing original stock equipment like fridge or hot water heater?
Lovely boat, just want to have a heads up if there are any bogeys.
Thanks.
Greg
Click to expand

Hi Greg: Tartan make a terrific boat, high in quality and performance. Over the years, I've chartered about 20, mostly 3700's, but, also the 40' out of Bayfield, Wisconsin. Their rigs are large with lot's of sail, so their boats sail much faster in medium and light air than other makers. I've also experienced many days of heavy air on Lake Superior, (25-30 knots) and never felt overwhelmed with reefing and/or furling. Also, at some point, (perhaps early 2000's), Tartan started making CCR's, (cruise control rigs), with carbon fiber masts and pocket booms, allowing easy adjustments right from the helm area. There's a 4100 CCR, (2005) on the market now with those specifications, google: Tartan 4100 CCR and it will pop right up. Peter Nordquist
Likes: jssailem
You must log in or register to reply here.
Share:
Email Link
Top Bottom