Tartan 37 Pensacola Shipyard, FL
Connie and I are in Houston dogsitting for my middle stepson. I got invited to crew on Firewater (a 38 foot C&C?) on the Friday night rum race on Galveston Bay. The weather was real iffy because the storm over the north end of the bay kept building up and backing down the bay.

We headed out to the start line under a dark and drizzly sky. We crossed the start line under reefed main and genoa heading upwind into 19 knot winds. Needless to say, it was an exhilarating upwind leg. The rain stopped on this leg about halfway to the mark but there was rain farther north of us so our aiming point was the base of the Eve rainbow. We kept telling the helmsman to "Go for the Gold!" After turning the upwind mark, the wind clocked of course and we stayed close hauled to the next mark.

The winds slowly died and we ended up shaking out the reefs on both sails. As the sun set behind the storm that hadn't died out completely, we strove to find the next mark with it tiny blinking light against the shore lights of San Leon. We had rigged a red light on the starboard stay to light up the genny so we could trim it. When we turned the last corner, we launched the Asym for the downhill run. The Asym has two dragons facing each other on it. One in red and the other in blue thus the name Firewater. And here I was thinking about alcohol. The red light on the stay lit up the spinnaker enough so we could keep it in flying trim. Although we were losing our night vision at times due to the storm dead ahead. It was on shore but was still strong enough to produce some really cool looking lightning bolts.

The wind continued to lay down on the way to the last mark. The skipper asked when was the drop dead time and it seemed we wouldn't make it. But the skipper decided we were completing the course under sail. We crossed the finish line at 1.9 knots with 2.1 knots of wind. The tactician went below to record our time and when he came up he said we had two more hours than we thought so we actually finished the race in time.

We would like to have stuck around for the after race party but we had left the dogs inside for a long long time so we headed back to the west side of Houston. There, the dogs were ECSTATIC to see us. Especially since we let them out into the backyard.

I didn't bring my phone so no pictures. Sorry.
Last edited: Aug 12, 2018
Likes: BlowMeAway and kloudie1

CAL 35 Cruiser moored EVERETT WA
Sounds like you had fun even though the dogs needed to hold it while the winds died.
Thanks for the shared experience. Pictures next time.

Hunter 340 Baytown TX
We were out there, too. Got lots of great photos and video. 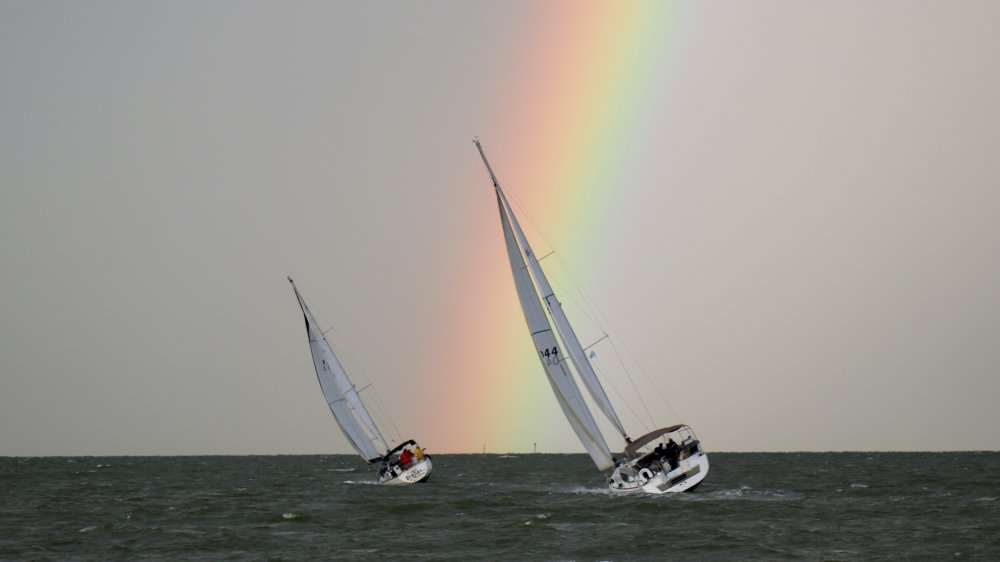 O'Day 1984 23 Island Park, NY
Great story... Thanks for sharing... Havent gotten out since mid July so really fed my soul!
You must log in or register to reply here.
Share:
Email Link
Top Bottom