Uh, there's black gunk coming out of the mixing elbow...

Hunter 30 (1978) Milwaukee, WI
Was motoring out of the marina when a bunch of white smoke started coming out of the exhaust at the stern of the boat and the engine activity audibly increased. Closing the throttle did not immediately stop the engine as it usually does. It seems like this would be a "runaway" situation. Turned off electrical power to electric fuel lift pump and tried briefly covering air intake with a binder. The engine eventually stops, perhaps due to no additional diesel being sent by the electric lift pump (maybe?).

Upon inspection of the engine after the engine room smokiness clears, I seem to have some kind of black liquid leaking out of the exhaust elbow (see picture). Not sure if it's due to carbon build up blockage or something else. There is also black gunk inside the air intake so I am thinking maybe that was the unintended fuel source causing all the smoke. Checking the oil shows darker, smellier oil than usual. It seems like a good first step to remove the elbow to check inside (after the engine has cooled). To remove the elbow, do you actually have to rotate the entire elbow piece to unscrew it from the rest of the engine? There seems to be a throttle cable and a wall in the way which is making it hard to unscrew. Is there hope for this engine after this experience?

Hunter 30 (1978) Milwaukee, WI
Also note how the air intake is pointed directly at the exhaust elbow... Why?

Canadian Sailcraft 36T Casco Bay, ME
Q1 Why is there an electric lift-pump installed?

Q2 Was a mechanical lift-pump bypassed when the electric one was installed?

Canel 25 foot Shoigama, japan
You have a late YS model Yanmar engine.
I would not bother trying to just remove the exhaust elbow, but would remove the whole exhaust from the head fitting to the flexible hose on the outlet side of the elbow.
If the hose is really tough to remove from the bottom of the elbow, remove it further down the line (away from the engine).
With the whole unit out you can put it in a vice on a bench and disassemble it.
If you can't remove the hose further down the line, use a small grinder with a cutting blade and cut the hose at a location where it is accessible. You can use a sleeve and some hose clamps to reassemble it later. This is the most painless way of getting everything out.

I don't know what that gunk is and have never seen the likes before.
I suspect it is caused by the carbon on the inside of the elbow boiling out of the crack. That would also account for the change in pitch of the engine noise that you mentioned.
If it is leaking out, you have a crack or corrosion in your exhaust system. With that engine you do not need to go out and buy a genuine Yanmar elbow.. There are plenty of posts here by people who have made up elbows with plumbing parts. That is what I would do for cost and expediency.
The exhaust is bolted to the head with three 13 mm bolts and you will need a new exhaust gasket when you reassemble..
So
1, Everything out.
2, check and make up a new elbow.
3. refit with a sleeve and a new exhaust gasket.

The air intake is like that because the engineers who designed it thought it was (and is a good idea).

As to Maine sails questions.
I was surprised at the mention of a lift pump, as I imagined this type of engine would have a fuel tank higher than the engine and thereby be gravity fed. This boat must have a tank lower than the engine.
Yanmar YS do not have mechanical lift pumps, only a fuel injection pump.

Hunter 30 (1978) Milwaukee, WI
As far as I know, the electric fuel pump seems to be a standard configuration for the Yanmar YSB12 on the Hunter. This guy has one: . I'm referring to the pump between the primary (not engine mounted) fuel filter and the secondary filter on the engine. After the secondary filter, there is the part which mechanically brings fuel to the injector and then the left over fuel returns to the secondary filter.
Likes: limbodog

Hunter 34 Alameda CA
I might guess that the short coupling between the exhaust elbow components has developed a crack. You could be seeing a mixture of sooty exhaust and water. Mine snapped off there a few years ago. Removing the elbow isn't too difficult.

Hunter 30 (1978) Milwaukee, WI
I was able to detach the hose from the elbow so the trick now is getting the elbow off the engine. Maybe the coupling is the thing I need to be rotating so that I don't have to try to go 360 degrees around with the elbow. Will definitely read up on replacement options.

Canel 25 foot Shoigama, japan
Yep. That is a fuel supply pump above the starter motor in the video.

And now a word from the sponsor...
Click to expand

Hunter gaskets for all! 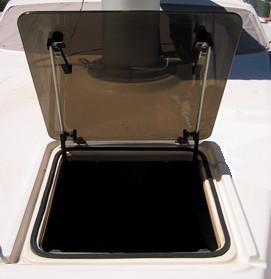 Gaskets for ports, hatches, latches, speaker pods, refrigerators, freezers, and everything that leaks.
See the product

ripperbone said:
I was able to detach the hose from the elbow so the trick now is getting the elbow off the engine. Maybe the coupling is the thing I need to be rotating so that I don't have to try to go 360 degrees around with the elbow. Will definitely read up on replacement options.
Click to expand

Remember that the coupling has a left hand thread on the top portion and right hand on the bottom. They are usually pretty tight, so complete removal is usually required so you can put it into a vise.
Likes: limbodog

Hunter 29.5 Punta Gorda
I have a GM but the elbow removal is the same. I had to take off the manifold and ended up using a torch and a 3-foot long pipe wrench while 2 guys held the workbench from moving but it came off. Got new one off ebay that is stainless steel. I'm into my second year with no problems.

Hunter H33 Port Credit Harbour, ON.
White exhaust indicates unburned fuel. If one of the injectors failed, pumping too much fuel into the cylinder, the cylinder will not fire properly sending the unburned fuel out the exhaust. The excessive fuel in the exhaust mixes with the carbon buildup causing a black liquid. If the fuel/carbon mixture is in the mixing elbow before the water injection it could run down, exiting at the threaded connection. Some of the unburned fuel could also leak by the piston rings and into the crankcase mixing with the engine oil. The excess fuel in the cylinder will also supply fuel to partially fire the one cylinder when the fuel cut off has been engaged.

Based on your description it seem likely that you have an injector failure in one cylinder. If this turn out to be correct I would advise to rebuild all of the injectors. Also, in this scenario, change the oil before running again and when the engine is started run it hard to eliminate the fuel in the exhaust system.

Hunter 30_74-83 Ponce Inlet FL
I think his engine has only one cylinder!