It has been a long summer. Planned sailing experiences were dashed by the issues of Covid-19 restrictions. Lockdowns in place delayed planned repairs and refit

ting activities. Striving for perfection would have meant more time in the marina, so in mid-August, Les Troyer and I went out for a trial cruise to see if the modifications to SV Hadley were functioning properly. We anchored one night and captured a mooring ball another. The newly installed refrigerator, cooking gear, sails, and the newly rigged anchor/mooring equipment all worked to perfection.

Planning for a longer, early September, cruise began immediately. At the same time @Kings Gambit posts notice of his plan to visit the San Juan Islands under charter. Coincidently, @Terry Cox announced he would be in the Islands during the Labor Day weekend. Timing was perfect. We chatted and the concept for an SBO rendezvous in the Islands was born.

When you sail familiar waters the need for detailed charts and navigation plans feels less important. Such thinking is the fertile ground for trouble. I started, about 15 days before our planned day to untie the marina lines, looking at the weather. I wanted to get a feel for the weather patterns. This thinking helps me with the situational awareness needed to judge the NOAA and Coast Guard Marine weather provided on VHF 04 in the north Puget Sound. With t

he predictability of the summer Pacific weather based on the location of the Pacific High, I opened the Windy maps wide to view the progression of Lows out of Siberia and the High in the North Central Pacific. The Lows looked to be on track to hit the Oregon/Washington coastline only to be nudged north onto the Alaska/BC coast up and over Vancouver Island and down into central Canada. This meant fair skies would bless our planned cruise.

All was well until 6 days before our cruise date, when a bit of High-Pressure cell collapsed and pushed up against Vancouver Isl creating the opportunity for a 24-48 hour period of strong Northerly winds on Labor Day, crept into the forecast.


Thursday September 3rd I did a weekend forecast and sent info to KG about the possible conditions they would face during the start of their Charter. We had talked about an anchorage (Blind Bay, Shaw Island). A site which opens to the north. I suggested an anchorage with a northerly faced opening might not be the best place for a Monday night stay. We conferred with Terry and he suggested that Parks Bay would be the place to go.

With the anchorage in Parks Bay set, I went to work on checking the tidal currents as Deception Passage is not passable when the tidal current is against you. An early morning departure and a 6-hour transit from Everett to the Passage would place us in the area just near the beginning of slack water 1pm. Perfect.


Winds? These would be starting in the AM out of the west north west variable about 7-10 knots (typical PacNW winds on the nose in the beginning hours of our cruise). Gradually changing to northerly as the day progresses. Not good for sailing but improving based on our planned route. After about 1000 we could get a period of fore beam to beam breezes and time for a sail. 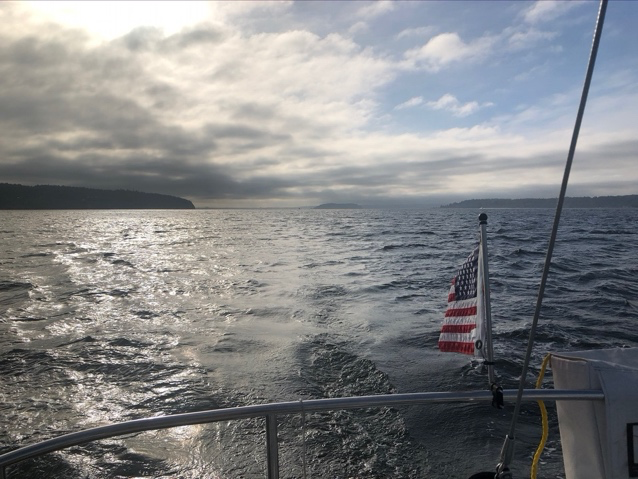 on Sunday and started our prep of the boat and provisioning for 4-5 day cruise. Joining me on this adventure was my lifelong friend Larry Berman. We awoke early on Monday Sept 7th to overcast skies, good visibility and temps about 60F. Motoring out of the marina and rounding the last channel marker we pointed SV HADELY on a bearing of 305M, into the chop blowing down Saratoga Passage. Our adventure begun.

As it worked out, we got near the NW end of Saratoga passage and the wind favored us for about 45 minutes with a 12-knot beam reach. This decayed as we closed in on the wind shadow of Whidbey Island and the wind shift to northerly began. Soon the wind was on our nose again. The channel we were in narrowed and up came the chop as the wind blew down the channel at about 20 knots. Clearly the expected windstorm was beginning. 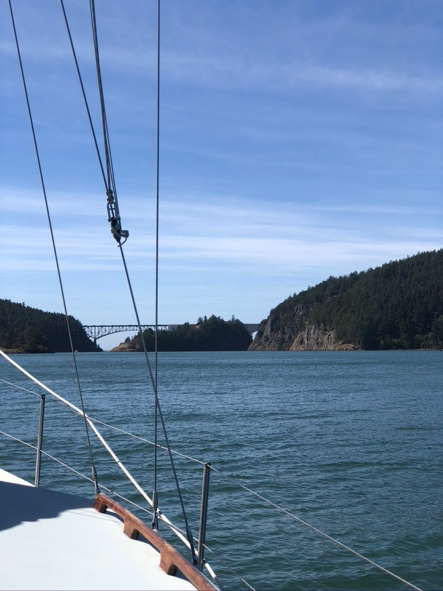 We made the transit through Deception Passage without incident. The high mountains of Fildago Island on the north side of the passage sheltered us from the wind. The currents were nearly nonexistent. My next immediate concern was the crossing of Rosario Strait on the west end of Deception Pass.

Rosario Strait runs about 15nm from Orcas Island in the north to the South End of Lopez Island in the south on a bearing of 184º, separating the San Juan Islands from the mainland of Washington. On this day, the winds out of the NNW were not perfectly aligned. My fear of big waves running down Rosario as we peaked out from behind the island immediately softened as the fetch and the wind direction were not aligned. Good News. We headed into the breeze and raised the sails to the 1st reef. Knowing the forecast was for building wind made this a prudent decision even though we were sailing in the lee of the islands. 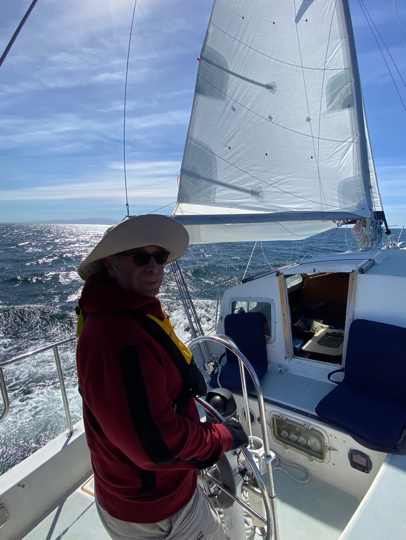 We had a grand time sailing for about 2 plus hours, 16 miles in the Juan DFuca, along the lee of Lopez Island towards Cattle Point. As we neared the end of Lopez, we started to feel strong gusts from the building wind field coming down the south San Juan Channel. The sail reef proved smart. At this point we would need to drop the sails as the next leg of our cruise has us heading once again bow to the wind. This time the wind was aligned with Cattle Pt Passage. The waves were more than chop and the idea of pointing the bow into the maelstrom did not sound pleasant. It would be like trying to ride a bronco while roping in the mainsail on the boom. Time for plan two.


Looking out beyond Cattle Point, the headland rises some 300-500 plus feet. The sea state beneath this headland was more favorable. We continued sailing some ¼ mile beyond the passage and Salmon Bank shoal on the west side of Cattle Point's Middle channel. We turned to steer the boat towards the headland. In the lee of the headland, bringing down the main sail and furling the jib was incident free. No one was tossed into the water (meaning me). The sail was secured on the boom. We now headed back to the passage to transit the waters of Cattle Point.

The Middle Channel is deep, 50-70 fathoms, fenced in on both sides by shoals and rocks. The currents flow south down San Juan Channel out into the Juan DFuca on Ebb or Flood in from the ocean up the DFuca north into San Juan Channel. It is a great place for wildlife: birds, sea lions, seals, Dahl dolphins, 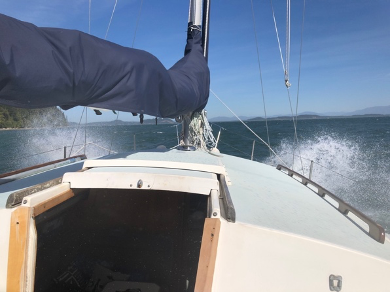 salmon and occasionally Orca to feed on the up-welling currents and rich nutrients provided. We were greeted by all but the Orca in our passage.

While the waters of Cattle Pt can be punishing, our passage near the time of slack delivered only a few wind waves splashing over our bow and being carried by the wind to the man at the helm. I’ve been in much worse. Once through the channel passage our progress north to Parks Bay was a cake walk. We pulled into the bay seeing our rendezvous mates at anchor. Found our spot and dropped anchor within 10 minutes of our planned ETA of 5PM.

O'Day 19 Littleton, NH
Hope to be back for more.

With the anchor set, we were tiding up the lines in the cockpit suddenly this white bearded guy appears in a dinghy beside our boat. “Hi I am ‘Kings Gambit’ from SBO.” Oh my. What a greeting. Quickly names were exchanged, and KG shared. “Terry is offering to have us for chicken dinner tonight aboard Belle-Vie, can I row you over?”

We dropped our boat duties, I dove down into the boat to grab some beer and Rum and get the never before used ladder from the closet. When someone says he’ll row you to dinner you got to find a way to get off the boat and into the dinghy without swimming.

KG navigated the “row able” dinghy (sort of in a straight line) with skill and we pulled alongside Terry Cox’s Hunter Passage 42 “Belle-Vie”. Terry was all smiles but with bad news. His Generator had decided to take an unplanned rest. We would have to reschedule our evening. Such is the way of cruising. Something always challenges you to adjust to plan B or C… 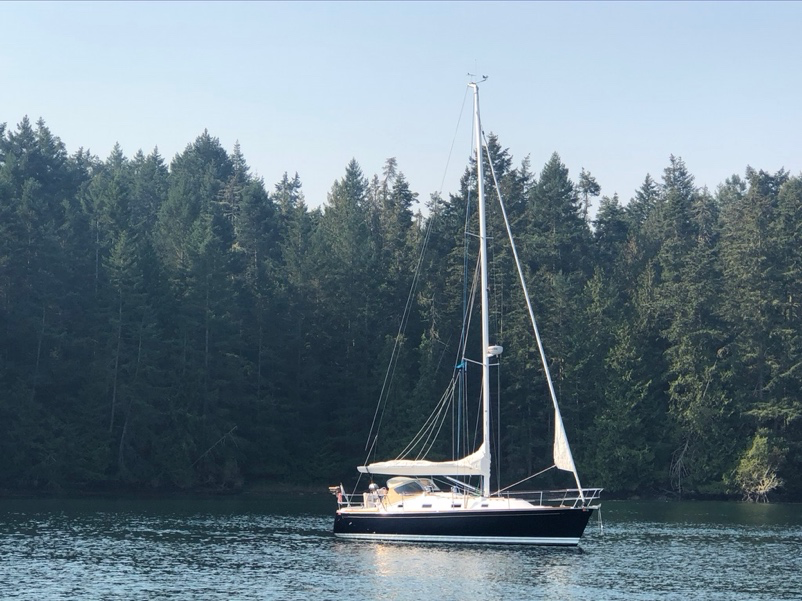 KG turned the dinghy around and off we headed to his chartered Tartan 34, announcing to his wife as we came along side – “Honey I’m Home and I brought guests!”


We had a lovely evening sharing stories, introducing our back grounds, socially distant in the open cockpit, drinking beer and sipping some 18-year-old Puerto Rican Rum I had brought from Hadley’s stores. It is amazing how wonderful it is for strangers who made an internet connection, can so easily build friendships on a boat cruising the Islands of the Pacific NW.

As the twilight evening and the warm breeze started to bring out the stars, we said goodbye’s and headed back to SV Hadley. The sunset was mouth dropping gorgeous. 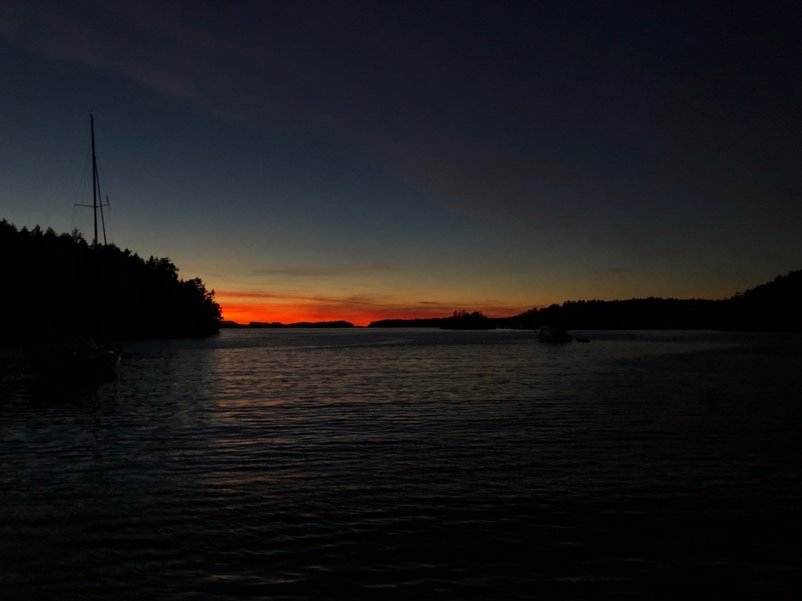