Hunter 36 Punta Gorda
My Sea Era would not work today but used a long screw driver to turn the blades and now it works.
Any body know the model pump to replace and it is the sea water model and thinking a spare would be good idea
to keep on boat and best place to get one.
Nick

Hunter 46 Point Richmond, CA
I replaced the electric toilet pump/motor assembly on my 2004 Hunter 386 and 2005 Hunter 46. In both cases, I removed it to verify the model number before I ordered a new one. Chances are the original model is not available so you will need the existing model number to match the new/replacement one.

Hunter 36 Punta Gorda
Well I had not used the boat fora week or 2 and when I pushed the flush button nothing happen and checked
the push button by jumping the bush button and the pump did nothing so I used long screws driver to turn the
macerator blades and than it worked fine and flushed everything into the holding tank.
I think the motor froze up and by turning the motor it freed up but for how long I don’t know and did notice the pump motor does sound different and sounds like it is spinning faster.
Nick

Hunter 40.5 Warwick, RI
I have a Sea Era saltwater model. The only failure I've had was the push button and Raritan replaced with with an improved model.
Is there any chance that your batteries were low or some kind of object had jammed the impeller? The flush end of the Sea Era looks a lot like a standard macerator, and the unit pulls a good 15+ amps when it runs. That is a lot of power that wasn't able to turn the motor. But since you shorted the push button switch and it still didn't run, that would seem to eliminate the switch as the problem. BTW, my switch that failed had a plastic body and the replacement was a metal body.
So it does sound like the motor was stuck or seized. Was it difficult to turn the chopping blade?

I carry a spare rebuild kit for the discharge end and the intake end. The only thing I have ever replaced was the joker valve after 5 years. I don't carry a spare motor. If I didn't have a second head I might consider sparing the motor.

FWIW, if you have a second head as a backup, I would wait to see if this happens again before buying a new motor. A quick search showed it to be about $120-125 street price at Defender plus shipping and tax.
Last edited: Apr 23, 2020

- - LIttle Rock
'Twould have been helpful to know how old your toilet is. IMO it's time to call Raritan tech support...they're knowledgeable and helpful. 800-352-5630. Mac McCoy has been my guru since Vic Willman retired...he began working from home when Raritan closed their Ft Lauderdale plant and warehouse, so he should be available even in these wacky working conditions. His extension is 306.

Hunter 40.5 Warwick, RI
@seadaddler - You asked the model number of the motor. As this may have been superseded, there may be a new part number. I installed in the Spring of 2012. You can see the part number of 160MI012 in the picture below. Defender shows it as just 160012. 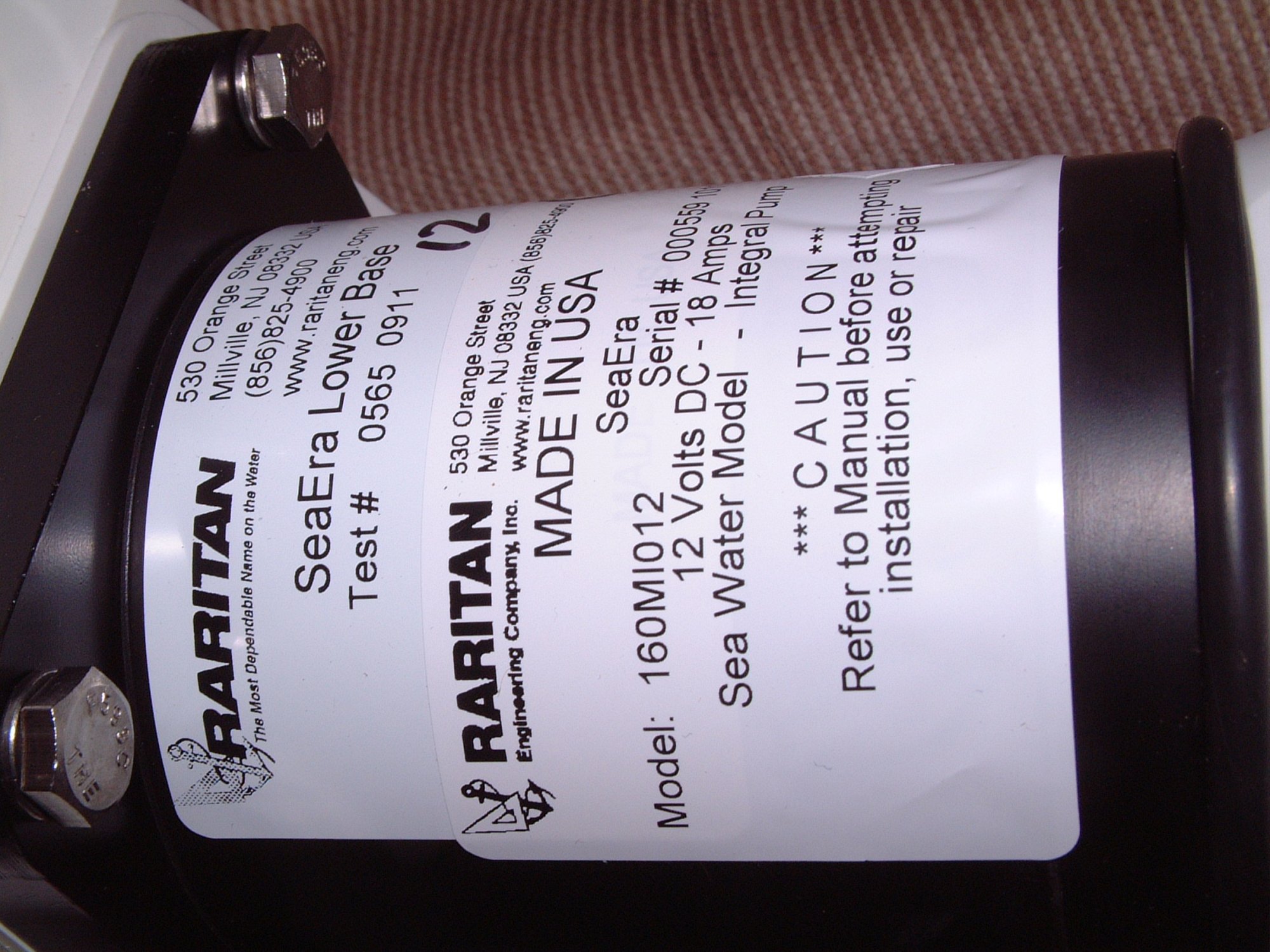 Beneteau 323 Annapolis MD
I have forever seen in forums where people complain about macerators not working- especially blue water cruisers. They never run clean water through so as to flush the crap out of the blades- and they solidify to various degrees.

Hunter 40.5 Warwick, RI
@Ron20324 - Running clean water through the macerator makes sense, and I do that at the end of a season when empting and flushing the tank for the winter. But how do you accomplish this during the season? My toilets connect directly to the holding tank and the tank output is split to the deck pump-out and to the macerator. I have a short clear vinyl hose section in the output of the macerator so I can watch the flow and shut off the pump before it runs dry for a long time. Solids are pumped first then the mostly liquid effluent. So the last liquid through the macerator is the most clean with little solids. I always assumed this was fine. But if it's not, and BTW I have never had a macerator seize from dried solids, how would I ever flush with clean water? BTW, I mostly pump-out so the macerator does not get a lot of use.

Hunter 36 Punta Gorda
I think it’s been in my boat maybe 6 or 7 years replaced joker about about 2 years ago and do flush mostly fresh water either from sink drain into my sea era intake or spraying fresh water into bowl.
I did not take much to turn the blades with screw driver and don’t think something could have jammed
other than maybe toilet paper rapping around blades or shaft.
Nick

Hunter 36 Punta Gorda
I was able to take photo of motor model and looked buying one as spare in case of a
problem and got price $175.00.
Nick

Rich Stidger said:
- Running clean water through the macerator makes sense, and I do that at the end of a season when empting and flushing the tank for the winter. But how do you accomplish this during the season?
Click to expand

All holding tanks and related overboard discharge plumbing should be at least nominally flushed out after ever pumpout and thoroughly flushed out at least 2-3x season. It's not hard to do...after pumping out, put at least a gallon--two if necessary to cover the bottom of the tank to a depth of 3-5"-- of clean water into the tank via the deck pumpout fitting...pump that out...repeat twice and once more to flush out the macerator pump and plumbing. If you don't want to do that after EVERY pumpout, at least do it 2-3x/season if you don't want jammed macerator pumps.

Hunter 46 Point Richmond, CA
Consider metering water into your holding tank prior to flushing. You can purchase this hose meter for $14.42. I use one on my trailer to prime the black tank prior to use and during tanks flushing.

Hunter 36 Punta Gorda
I am talking about my Sea Era and the macerator blades in the bottom of toilet.
Nick

Hunter 46 Point Richmond, CA
I was adding a comment to the previous post. The meter can be used during flushing.

sail sfbay said:
Consider metering water into your holding tank prior to flushing.
Click to expand

I just linked that same water flow meter from Wally world.
I meter in fresh water so i don't over fill my water tanks.
Jim...

Beneteau 323 Annapolis MD
@Ron20324 - Running clean water through the macerator makes sense, and I do that at the end of a season when empting and flushing the tank for the winter. ....I have never had a macerator seize from dried solids, how would I ever flush with clean water? ...[/QUOTE]

I got that tidbit of info decades ago in Cruising World Magazine in response to an "end-of-season" survey as to what problems did cruisers experience on their Atlantic crossing or snowbird routes. NUMBER ONE ANSWER was clogged impeller blades/ Flush 'em or freeze 'em was the advice.
You must log in or register to reply here.
Share:
Email Link
Top Bottom