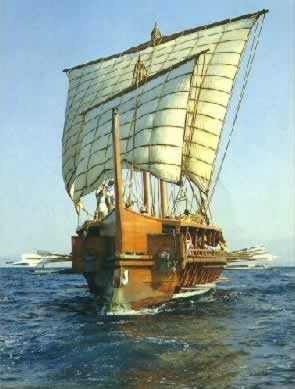 Pytheas was the first known Greek to sail to the British Isles. After spending time getting to know the people of the isles, he sailed farther North, a couple of weeks, until he came to a place where the air and the sea mixed and discovered the land of Thule. Most believe it was Iceland. There were people there already to greet Pytheas.
After spending some time sailing the North Sea and getting to know the people there, Pytheas returned home to tell his story of the people and lands he discovered. No one believed him. His account of his trip was written and then lost. Many ancient historians and philosophers have referred to Pytheas' story, so it comes down to us second hand. Most of the retellings are filled with skepticism. However, today we know more about the people Pytheas described meeting and his story matches up with our knowledge of these people and places.
I first read about Pytheas and his trip in a book I have somewhere on my shelf titled something like "the History of Seafaring" one of the facts I remember reading about in this book was about the Vikings. They were first described in a recounting of a raid on a monastery in 736 CE.

Before the viking era, ancient Scandinavian people propelled their boats with paddles instead of oars. Could Pytheas have been the one to bring the oar and oar lock to the ancient people of Northern Europe?

Will Gilmore said:
Pytheas returned home to tell his story of the people and lands he discovered
Click to expand

Now we know what he did on the boring long voyages.
The LOG BOOK...
Jim...

not to be that guy, but back then, it was called a "log scroll"

Tartan 3800 Westport, MA
Thanks for posting this, Will. Very interesting.


Will Gilmore said:
Could Pytheas have been the one to bring the oar and oar lock to the ancient people of Northern Europe?
Click to expand

Not likely. "1400 miles from Mt. Olympus in a north northwesterly direction there are some fantastic rock carvings called the ‘Tanum Petroglyphs’ in the borderlands of Sweden and Norway. All of these representations of oars in boats, interestingly enough, are about four to five thousand years old."
A Somewhat Inclusive History of Oars Dating Back a Very Long Time
Likes: ggrizzard and Will Gilmore

O'Day 19 Littleton, NH
I have to say, that example image looks more like a sled than a boat with oars.

I'm not saying it isn't true that oars were used so long ago, but I remember reading something about the people who would later become Vikings using paddles just a few hundred years before. Certainly oars are a simple straight forward enough technology to have become fairly universal very early on.