Catalina 310 #185 Quantico
So, we had a race at my club last weekend and we used RaceSail to score the races. I am getting a ton of questions from one boat who "does not understand" the results. We got two races in with the 1st race averaging 15 knots and the 2nd race saw perhaps 7 knots with the wind fading quickly, then we headed to shore to watch the SpaceX launch. Below is the RaceSail print out. So the top 3 boats finished with 4 points and RaceSail went to its tiebreaker and gave the overall win to Music Maker. I also did a spreadsheet of the finish time delta s in both races. I admit I am a little bit confused, but my thought is RaceSail took the two first place finishes and calculated the difference was 18 seconds between the boats on the finish. The boat who finished 2nd in both is thinking he should have taken overall. He quoted me the Racing Rules below and my thought is RaceSail followed A8.1 and since he was 2nd in both races the tie was broken in favor of the other two boats. Thoughts?

A7. RACE TIES
If boats are tied at the finishing line or if a handicap or rating system is used and boats have equal corrected times, the points for the place for which the boats have tied and for the place(s) immediately below shall be added together and divided equally. Boats tied for a race prize shall share it or be given equal prizes.
A8. SERIES TIES
A8.1.
If there is a series-score tie between two or more boats, each boat’s race scores shall be listed in order of best to worst, and at the first point(s) where there is a difference the tie shall be broken in favor of the boat(s) with the best score(s). No excluded scores shall be used.
A8.2.
If a tie remains between two or more boats, they shall be ranked in order of their scores in the last race. Any remaining ties shall be broken by using the tied boats’ scores in the next-to-last race and so on until all ties are broken. These scores shall be used even if some of them are excluded scores. 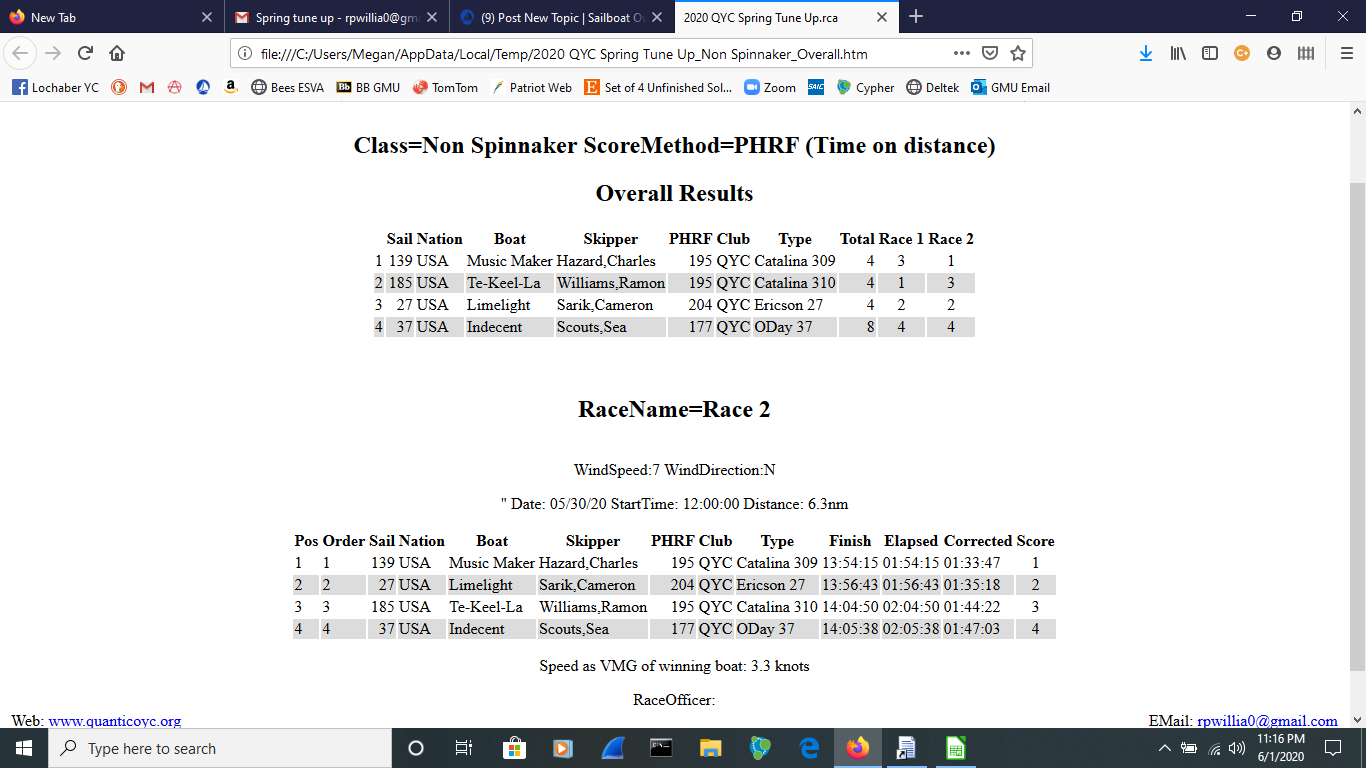 There are no timing ties in the race shown, so A7 does not apply at all.

Overall, three boats on 4 points, so A8 plays.

Jackdaw said:
Both MM and LL have 1 point races (wins), so they both beat Indecent, who is 2+2.
Click to expand

The "Overall Results" do not show that Limelight took a first place in any of the races. Limelight got 2nd in both races. Indecent got 4th in both races. The finish order is correct as shown in the overall results.
Last edited: Jun 2, 2020

Catalina 310 #185 Quantico
Thanks all. That was my thought that a 2nd place should never beat a 1st place. Now, if we had had a 3rd race that would have changed everything, but at that point the wind was dieing and the SpaceX launch was coming up.

Ted said:
The "Overall Results" do not show that Limelight took a first place in any of the races. Limelight got 2nd in both races. Indecent got 4th in both races. The finish order is correct as shown in the overall results.
Click to expand

Right... I meant Te-Keel-La, while I was typing I was scrolling up and down, and was looking at the timed results of the individual race, and not the final scores above it. Slide every boat I talked about below MM up one place. Must have had too much Te-Keel-La last night!

Beneteau First 36.7 & 260 Minneapolis MN & Bayfield WI
BTW,
I've seen this play out SO many times; the 'super' tie-breaker of the last race in a series. Going into the final race 1 point ahead of your major competitor, you have to think about that as a tie, and not a lead. You CANNOT let them beat you, even by one place, as they always correct over you on the tiebreaker.

rpwillia said:
Thanks all. That was my thought that a 2nd place should never beat a 1st place. Now, if we had had a 3rd race that would have changed everything, but at that point the wind was dieing and the SpaceX launch was coming up.
Click to expand

Yea, it's fun that the top 3 in the 1st race were totally reversed in the 2nd, causing that 3-way tie on points. Skippers not used to the last-race tiebreaker rule can often be flabergasted when boats that they thought were 'out of it' coming into the last race, or later at the scoring table, beat them overall.

LL was probably looking at the time-gap in the 2nd race, seeing they CRUSHED TKL, only to have them tie-break over them. Thats PHRF racing. Beat a boat by a second or an hour, it still only one point.

Probably good that you didn't to that last race, you were down to about 3 knots VMG in the 2nd!
You must log in or register to reply here.
Share:
Facebook Twitter Email Link
Top Bottom