Hunter 34 Mandeville Louisiana
Was out playing with a friend's drone and noted how neat these things are for looking at things .. Was inspecting the masthead and noted how nice our marina looked.. Lake Pontchartrain on the horizon, New Orleans some 24 miles to the left of center. You can see the big trees that give us a pretty good windbreak for storms.. The outlet from the bayou is protected by the seawall to the right center; there are 4 zig zags before getting out to the lake.. I have been there since 1978 and still really like the quiet and calm of this place..

CAL 35 Cruiser moored EVERETT WA
Looks like a place one can enjoy.
D

AquaCat 12.5 17342 Wateree Lake, SC
I've never seen a marina quite like that. Easy driveway access to most boats. No walking down docks. Way cool!
Likes: kloudie1

Hunter 31_83-87 New Orleans
Is that the old Prieto marina? It's been a while since I've sailed the north shore. How'd it fair during Katrina?

Hunter 34 Mandeville Louisiana
Yes, Prieto Marina.. They did a re-build three/four years back and got everything in good shape.. For Katrina, we had about three feet of water inside the office building on bottom right (also for Gustav and one other tropical disturbance).. so water from the lake had covered all the land around there.. Boats did fine.. two trees came down.. one dismasted a Hunter 30 a few slips from mine.. The trees were growing on the banks of a couple of slips.. They've since removed all the trees that were in the boat slips.. The land on the left of the picture is a state park, so no development.. there is a ridge about 20 feet high in the trees lining the bayou .. that protects us from waves from the lake during big storms, even though the water covers everything..

Beneteau 343 Slidell, LA
Kloudie,
How is the slip availability over there. Has it settled down with some availability since Katrina. I know that a lot of folks have moved their boats over there with the New Orleans municipal marina still not refurbished since Katrina.....

Hunter 31_83-87 New Orleans
Thanks and I was wondering the same as Big Easy on availability. Been in Houstin for the past 18 years and wife is thinking about moving back that way. What is slip availability especially since New Orkeans Municipal harbor has yet to be rebuild. Amazing it has been 12 years since Katrina and the city has done absolutely nothing on west end.

Beneteau 343 Slidell, LA
Sad but true. West End marinas on Lake Pontchartrain remain in poor condition and have not been restored since Katrina 12 years ago. Seems that the Mayor has more important things to concentrate on such as removing confederate statues and running around the country trying to gain national recognition for his next political position. Meanwhile, the pumping system that keeps the city dry is a wreck and the municipal yacht harbor has a majority of slips that are unusable and no power available. South Shore Harbor, that is owned by the New Orleans Levee Board, near the New Orleans Lakefront Airport, reopened several years ago after completing repairs. Meanwhile, Mississippi has dismantled the old Gulfport Harbor years ago and has rebuilt a beautiful marina there. Bay St Louis has built a new marina that opened about 3 years ago, and Pass Christian as well as Long Beach have doubled the size of their marinas. Very frustrating for New Orleans sailors.

Lancer 27PS MCB Camp Pendleton KF6BL
What kind of drone was it? I have one, but it is more of a learners drone and unless there is absolutely no wind, it is grounded. My drone also has a tight motor on one of the legs so it spins just a little slower than the others and causes the drone to not hover correctly. On well.

CAL 35 Cruiser moored EVERETT WA
Brian. It is like a boat... Money seems to solve everything.
Phantom 4 Professional+ Quadcopter Surveillance Video Quad, White (CP.PT.000549) at $1700 got "Best of the Best" here: http://bestreviews.com/best-drones

Here is the image bait: 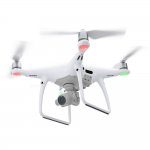 Lancer 27PS MCB Camp Pendleton KF6BL
Yeah, mine was $30.00. LOL Slight difference in quality and stability. LOL Not ready for such a beast yet. Still need to send mine out and retrieve it without walking a mile. LOL

CAL 35 Cruiser moored EVERETT WA
Yes... retrieving the drone without an auto home feature can be a bit of an adventure.

My 11 year old Nephew was so pleased with his drone for Christmas. He took it outside and around the house, playing with it every day. Then on the 2nd of January he was outside and he tried to see how high he could make it fly....

It went up. and up. and up til the controls no longer were in control. Then it went away.. and away... He ran back in side and put on his snow gear as this was Michigan in winter. It was getting dark so they were sure they could see the drone lights.... He and his Dad walked for hours. They think they covered about 4 miles. Nothing.

Once you set those drones free they are on their own...

Hunter 34 Mandeville Louisiana
The marina does not have much availability.. None where this shot was taken.. They may have a couple of slips up the bayou a ways, but not nearly as nice as this location.. There is a pretty good sized marina up the bayou, Colbert Cove Marina, but again, not nearly as nice and the manager is a problem.... Google Earth, 30,21.09 by 90, 02 59 is his location.. The other location of Prieto is a tenth of a mile ESE of Colbert..
Drone is my buddy's https://www.amazon.com/DJI-CP-PT-00...keywords=drones+with+camera+and+gps+live+view

Catalina 270 255 Wabamun. Welcome to the marina
The Mavic Pro is a good platform. It has some nasty issues with white balance, and even with a good set of ND filters, I'm not exceptionally happy with the results. It's an excellent flight platform, however, rock solid stable and easy to fly. The body is quite small, and it charges from a USB port, so it's a good fit for the boat.
The collision avoidance and the lack of space between the body and the props precludes landing it in the cockpit if you value your fingers.
Last edited: Sep 24, 2017

Meriachee said:
landing it in the cockpit if you value your fingers
Click to expand

TBD Looking for my next boat CT
I just picked up a DJI Spark with controller. Very cool device and very high quality - so far I've been flying only in beginner mode, so it won't go more than 100 feet away. I need practice before I try it around water.
The initial mandatory firmware updates were quite vexing until I found out online that there's a bug in the latest Android version of the DJI app, but a DJI forum article I found linked me to a prior version app, and that did the trick.
BTW I bought a separate inexpensive Android mini tablet to use with it, because I didn't want the DJI app on my primary smart phone or on any other device where I store sensitive or private information: If you read the DJI app terms and PRIVACY POLICY you are aware that the app is very invasive, and when you accept the terms they may access and transfer your private information on your mobile device.
Last edited: Sep 24, 2017

Catalina 270 Baltimore
Maybe a little off topic but entertaining nevertheless. Got this email today.