Hunter H 41DS Hampton, VA
Does anyone know what the PHRF rating is for a H41 DS. I was in my first event this weekend and we came in second. They gave me a PHRF number of 117. The H45 that finished 20 second ahead of us had a rating of 144 and he had laminated racing sails. Does this make sense? Cruising class, non spin, conventional rig.

PHRF New England is an independent handicapping authority whose handicaps are used by fleets sailing on Buzzards Bay, Massachusetts Bay, the Gulf of Maine, and Lake Winnipesauke.
www.phrfne.org
These are base. There are corrections for fixed prop, largest headsail carried (But not material), and some other factors. The ratings are not rule derived. They are based on experience of performance which has a lot to do with waterline length.

Hunter 40.5 Beaufort, SC
Looking at some other area PHRF ratings for a H41 DS SD (I assume shoal draft) the number of PHRF rating of 132 seems to keep popping up. Don't know where your club got 117. Maybe they think you're a "ringer" and needed to ding you a little. I am sure @Jackdaw can give you some relevant info on why a 45 foot Hunter (longer waterline) with laminate sails would have a higher PHRF handicap than a H41 with probably Dacron sails. Doesn't make sense to me. Maybe the owner of the 45 has some dirt on the race committe or brought the right kind of Scotch to the rating committee

I don't race but my 40.5 (wing keel, dacron sails, non-spinnaker cruising class, 3 blade feathering prop) generally has a PHRF of 120 in the Charleston ratings. That looks pretty consistant with @Rick D number of 102 plus the 15 non-spinnaker (117 total).

Beneteau First 36.7 & 260 Minneapolis MN & Bayfield WI
First, what PHRF fleet are you in? That might go a long way to see whats what. Its interesting that according to US Sailing, both the 40DS and the H40 have ratings of 111 in Mid-Atlantic. Thats a spin rating of course. 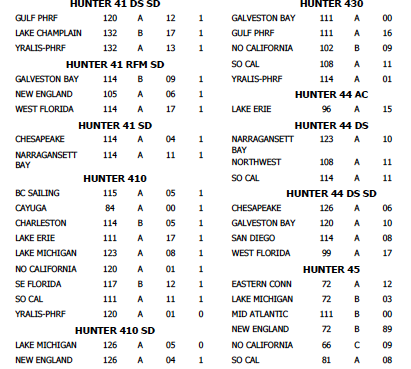 Props and headsail size can factor in PHRF ratings and might explain the difference. Sometimes roller furling. Some PHRF boards give credit for dacron sails, but that rare. PHRF is observed performance model, so in the absence of observation they just guess. In general, the practice is to give new boats a more punitive rating, thinking that a bad (low) rating effects only one boat. A bad (high) rating effects everone.
Last edited: Monday at 5:49 PM

Slickcraft 26 Greenport, NY
While no rating system is totally fair I have to say that in looking over results for our local PHRF fleet the order of places is about right. That means the boats finish in roughy the order of their waterline length and correct out to something close to even. PHRF is reasonably valid in rating different boats. Other rating methods such as measurement based ratings probably do better but they are most useful for similar boats. Not a bad thing - just not for club level. One design is a whole other world. I was amazed that, at events here at Martin County Sailing Center, how many vendors came to sell gear. And also amazed at the spending going on. Kids were great! Parents less so.
You must log in or register to reply here.
Share:
Facebook Twitter Email Link
Top Bottom