Hunter 34 Deep Bay, BC
I have a 1983 Hunter 34. There are three blocks on swivels at the base of the mast, each with a cam cleat on the bottom. The line comes down, around a tiny sheave or roller, around the main sheave, and then through the cam cleat. The problem is that on all three of them the little roller or sheave at the top has disintegrated. On one it's missing entirely; on the other two, the two side remnants remain (but do nothing). The one on the left (line with green flecks) is the topping lift, and is nearly impossible to haul on. I'd really like to replace these rollers, but I can't figure out where to get them. The two in the foreground are 3/4" wide with a 1/4" pin. The other one is 1/2" with a 3/16" pin. Any ideas where you can get such things? All the local chandlers tell me they have no idea. 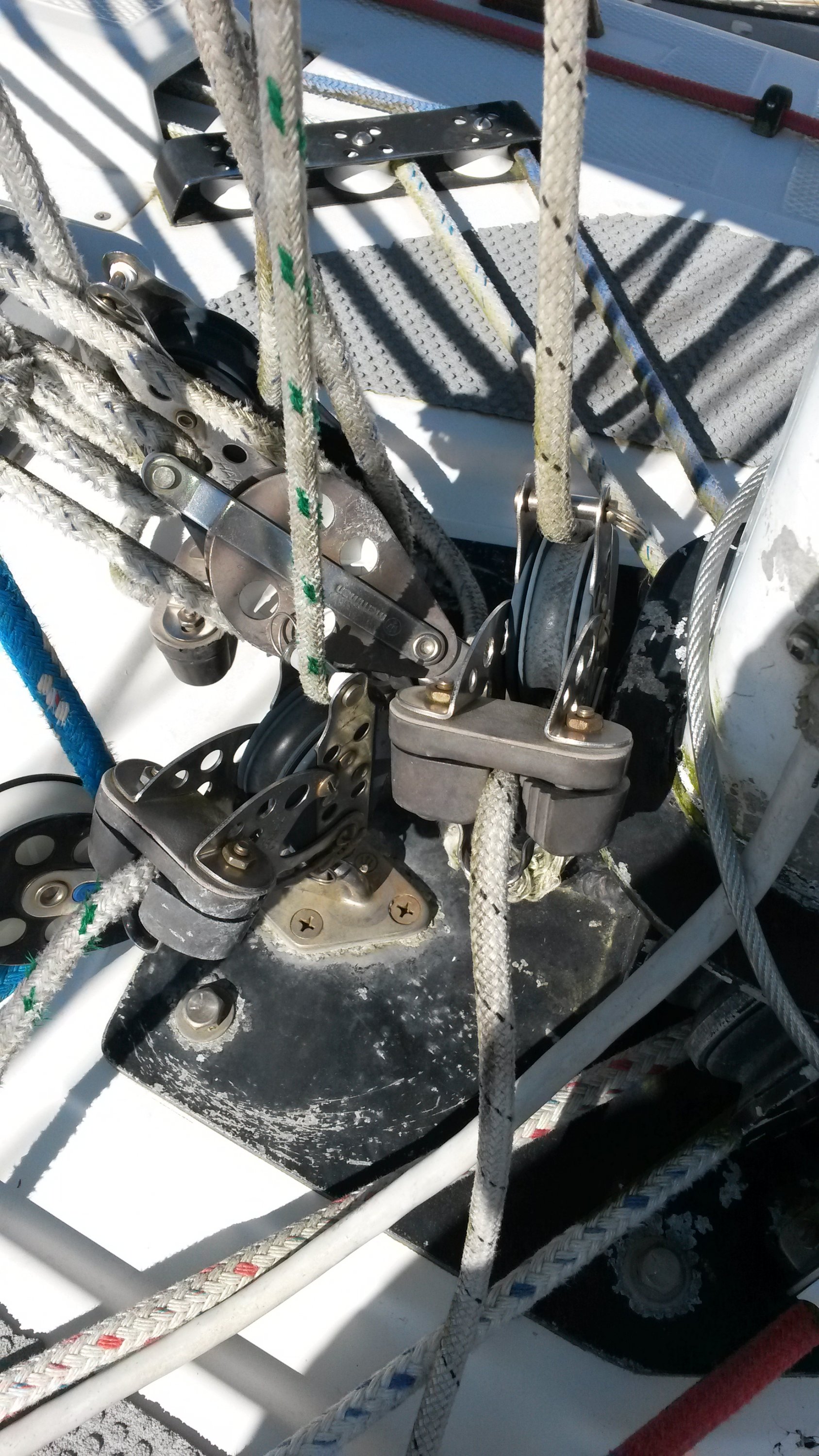 S2 9.2a Fairhope Al
all those blocks look like Shaffer blocks ...contact them and order the new shivs from them.....

Beneteau First 36.7 & 260 Minneapolis MN & Bayfield WI
As Woody says see if you can ID the maker. Some of these things were designed to be rebuilt, IF parts are still available. Remember these ARE wear parts, and your boats is 33 years old. Expect them to need replacing.

NOTE - Your pictures shows the line going around the front of the becket (what you called a tiny roller). DO NOT do that. Let the line go around the back straight to the block. That becket is for attaching the working end of a line.
Likes: Rick D

S2 9.2a Fairhope Al
after looking at the blocks with cam cleats on them again ...one looks like scheffer and the other two look like harkin and that one pad eye looks like Merriam

Catalina 30 Mk II Barnegat, NJ
This is fun. I read the problem, looked at the pic and thought "ooh, ooh I know this one", then scrolled down and saw that I was right.
Those large sheaves look to be in decent shape so an easy fix at no cost.

Hunter 34 Deep Bay, BC
Lots of helpful advice here. First note: "I" did not do this. I've never had a boat with similar blocks on it. Some previous owner rigged it like this, and apparently long ago, as all three are worn away. It never occurred to me that they were rigged wrong, and you can go straight up with the line; I thought the cam cleat would have ended up pointing straight at the deck if you did that, and that there would be immense strain on the swivel to the deck due to the odd angle. As pointed out, this will be a dead simple, no cost fix. I see no reason to even replace the beckets (new term to me) unless the blocks got repurposed and needed to attach a line there.

Two: Interesting that I talked to about four chandlers about this, (and showed pictures) and not one figured out they were simply rigged wrong.

Three: Woodster appears to have a sharp eye. The one in the back you can barely see is a Harkin (marked). There is another Harkin out of sight behind the mast, and the padeye is Merriam (marked). The two in front (now that someone has steered me to them) appear to be Shaeffer. There are no markings on them, but they look like very similar to ones on the Shaeffer webpage.

Thanks to everyone. This website never fails to give me the answer I'm looking for, usually in less than 24 hours.

Hunter 34 Alameda CA
Also, depending on how difficult it is to release the line from the cam cleat, you can remove the screws into the sides and flip the assembly over. That way you can pop the line upwards to release.

Hunter 34 Deep Bay, BC
Ooh, that's an excellent idea. The topping lift particularly is nearly impossible to release now, because it's so close to the deck. With the cam cleat facing up it would be really easy to release, and just as easy to cleat (step on it).
S

Hunter 31 Tampa Bay
Wow, Allan, that solves a problem I have on my vang hardware. The block is mounted under the boom, and I have to pull up to release the cam cleat. Had know idea I could take it out and flip it over. I'll repeat the earlier sentiment. You get answers here, and often quick ones, and for that I'm thankful.

Now my question: I see the device marked Merriam, but it looks like another block to me. What makes this a padeye? I thought these were padeyes:

S2 9.2a Fairhope Al
they are both pad eyes just heavy duty
S

Hunter 31 Tampa Bay
So what makes the thing in the picture (manufactured by Merriam) a padeye? It looks like a block to me. I'm confused. Is a padeye something other than a metal ring to that bolts to something?

S2 9.2a Fairhope Al
that u shaped ring on the base plate in your pic is a pad eye just like the one at defender that has 2 holes.... only the merriam one has 4 holes they both do the same function you can attach blocks to either one....google pad eye pics a look at the many that are out there

Hunter 34 Deep Bay, BC
Small update: the blocks work immensely better when rigged correctly, and turning the cam cleat over didn't work. That made uncleating it a snap, of course, but also made it impossible to cleat. However, I've discovered that if I stick my foot under it, I can fairly easily uncleat it with the cam facing down. All in all, a successful adventure, and, as pointed out, at zero cost.