Catalina Catalina 30 Mk I San Francisco
Hope everyone is well.
I have a 1978 Catalina 30 that had a external rewire of lighting sometime in the past. I would like to use the original wiring in the overhead, but it currently has no power and I see no easy way to rewire through the solid ceiling. Does anyone know where the wiring comes out so I can check viability of the wiring running to the overhead lights?
Thank you for any help and wishing you fair winds and following seas!

or by sending an email to:
Catalina30+subscribe@groups.io

This comes from this sbo thread by weekendrken:

Catalina 30 Mk II Barnegat, NJ
On my 93 C30 wires run along the cabin top hull joint both fore and aft, around to the other side and aft / forward. Wires that stay low cross under the cabin sole in front of the inboard to the other side.
None run up and through the cabin top. Even if yours did originally, it would be a lot easier to go the way of the newer C30s.
Likes: JimSFBAYCatalina30

Catalina Catalina 30 Mk I San Francisco
Thank you Ward and Stu, I down loaded the wire diagram and Will take a look tomorrow. I attached a photo shows the wires coming out of the overhead I discovered when I removed the light from the ceiling 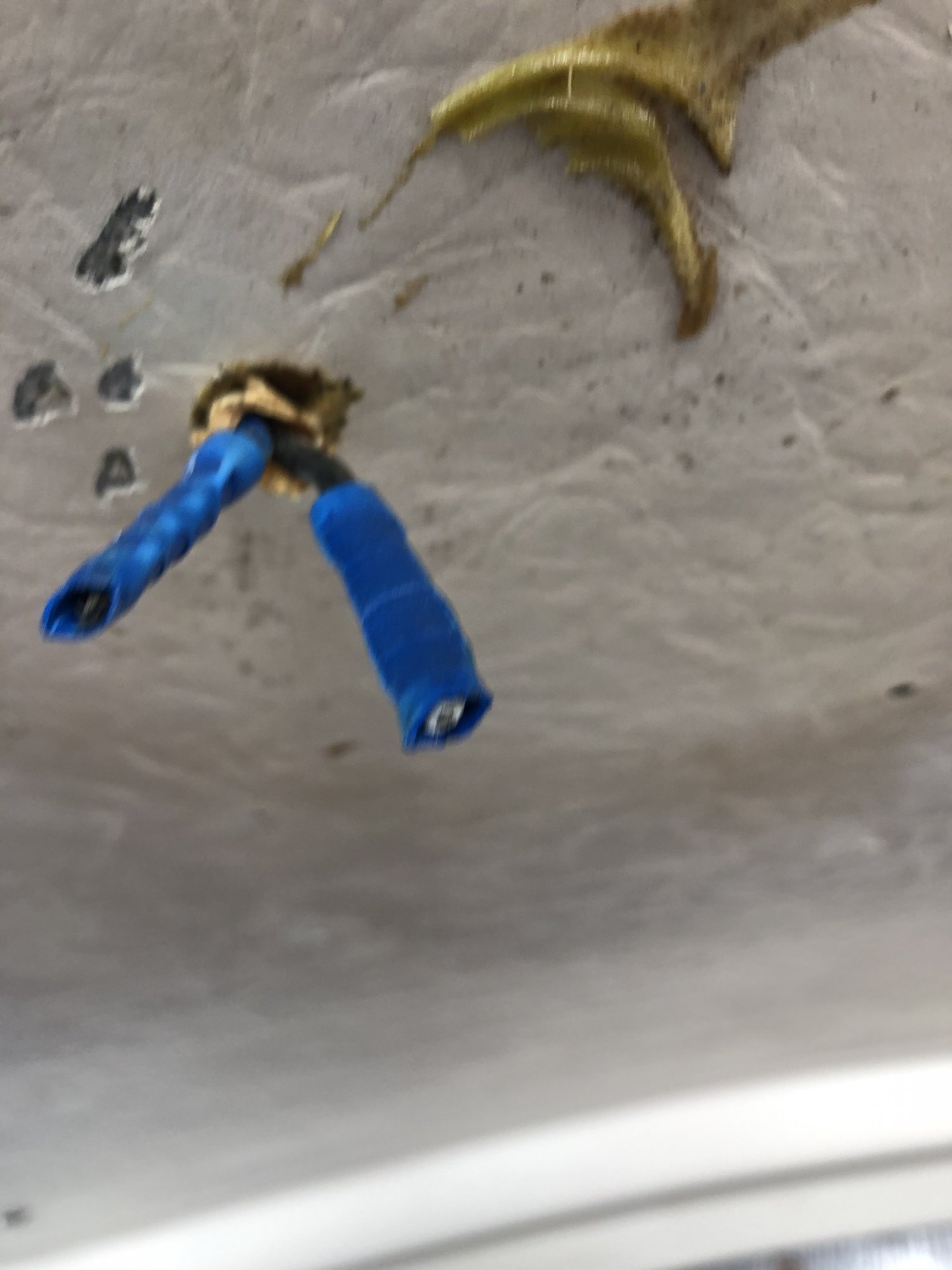 Catalina Catalina 30 Mk I San Francisco
And here is a photo of the Jerry rigged lighting wires before I took down the light. Since these pictures were taken I rigged LED strips in the shelving, but I would like to rig LED overhead lights too. I just don’t want to abandon the wires sticking down if I can salvage the wiring in the overhead already. 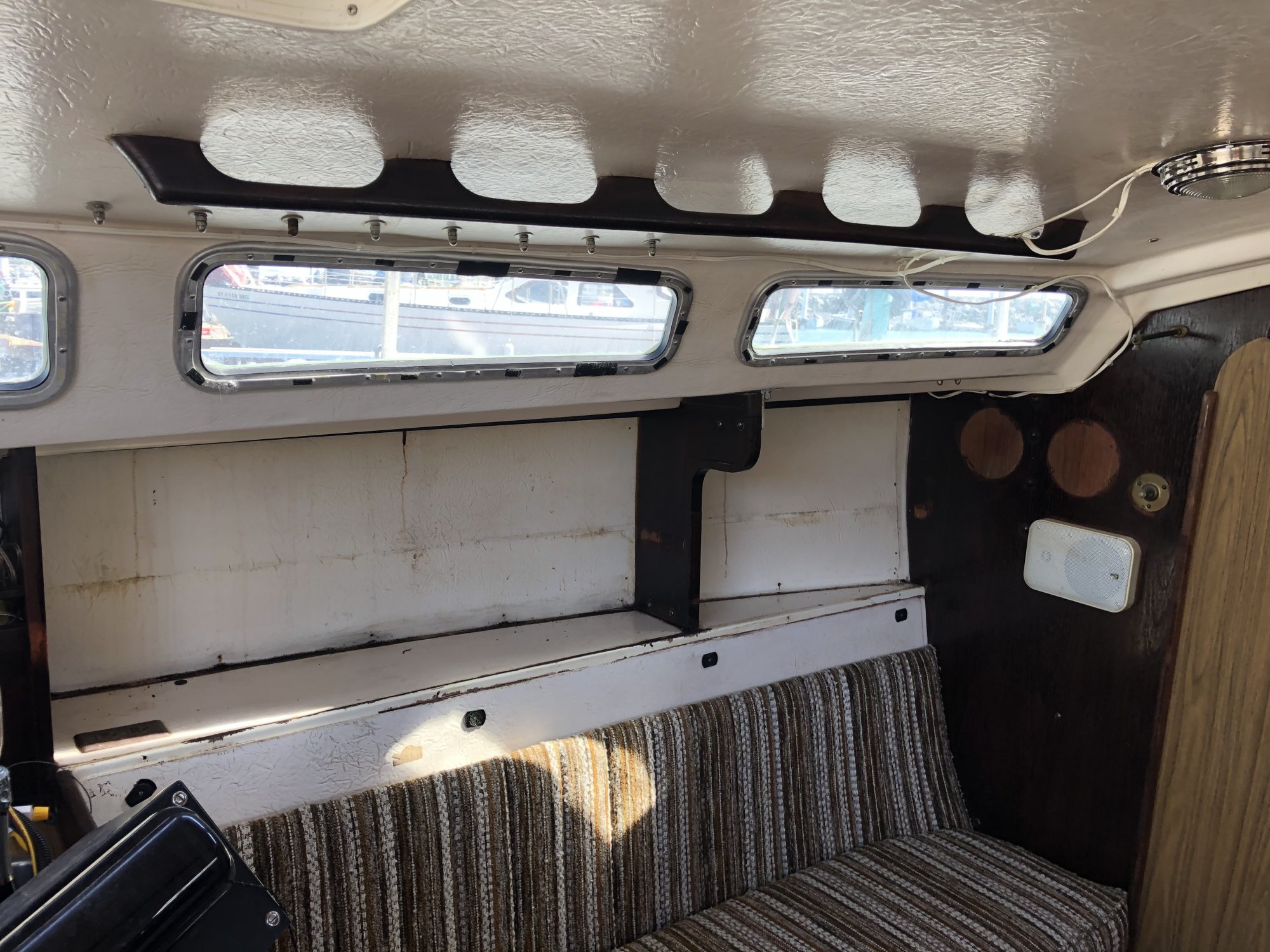 Catalina 30 Grand Lake. Wyandotte, Ok.
I have the same situation with my wires. They do not have voltage at the ends so I presume they are separated somewhere in the ceiling. I do not know if they can be pulled through. I have not found where the connections are. If they are easy to get to if not impossible. Hope someone here as some insight.
Likes: JimSFBAYCatalina30

Catalina Catalina 30 Mk I San Francisco
Thank you Admiral for your addition, I assumed the break wasn’t in the sealed part but without knowing where it comes out I can’t test it. Also, since all the lights in the overhead were rewired I assumed it was where they come out not inside … but that could just be wishful thinking. In the mean time, I rigged two strips of LED lights, port and starboard and plugged them into the 110 outlets. It works very well as long as they are not direct light or have a disused lens. It is also fun to play with the colors. I can use white light, but I like making the light red and green if I am on the boat in port at night. I still want to rig LED overhead, so I will keep looking. Just one of many projects!

Catalina 34 224 Maple Bay, BC, Canada
I added overhead lights on my 1986 C34 in 1999. No wires ran under the lining. I used plastic wiremold cable covers. neat, can match the color pretty well - don't use white, find the tan wiremold. Still working, one over the galley sink, one over the saloon table.
Likes: JimSFBAYCatalina30

Catalina Catalina 30 Mk I San Francisco
Stu, do you have pictures of your set up?
J

Catalina 387 Dana Point
Some wires go up where the panel is at the nav station (The nav station and quarterberth lights), some go up in front of the port lazarette/sail locker (where lotsa folks put a fridge compressor)

But, that's unlikely to help you. Catalina used untinned non-marine wire back then. And it'll corrode in half. It did on my c-30: I lost all the ceiling lights on the port side. As far as I could tell, there wasn't a raceway or anything, they just glassed the deck over the wires and the plywood core. I'd guess they taped the wires to the core. So it's likely impossible to pull new wires. Other folk in the marina with old c-30s had the same story.

What I did was get some duplex marine wire (like you showed in the hack-job picture) and very carefully glued it flat to the overhead. Looks much like wiremold would, but follows the contours. Run straight it looked quite decent. Galley light, the light above the table, the head light, and the light in the vberth were all affected.
Likes: JimSFBAYCatalina30

JimSFBAYCatalina30 said:
Stu, do you have pictures of your set up?
Click to expand