Hunter 23.5 Oasis Patoka Lake, IN
Im in the planning stage for a few weeks in the North Channel of the Great Lakes next summer. We will be dragging our boat up behind the truck and coming through Mackinaw City. Im thinking to save time and get east of Cockburn Island we would continue into Canada and put in somewhere on the northern side. Ive been doing a Google map search and looking at marinas along the way. Nothing stands out as a very good place to put in and leave the truck and trailer for a few weeks.

Any suggestions for a good take-off and landing spot?

Also, never been on the big lakes before. Im open to any must see places or places to avoid (dont lie). We will be in a modest 24 footer.

Seaward 25, Catalina 350 Erie, Pa
We have launched at Spyder Bay Marina in Little Current a couple of times. Very good launch and plenty of space for the truck and trailer. There are a also a couple of places to launch in Spanish...the town launch and the launch at Almenara En El Rio (a little further up the river).
Likes: Parsons and CrispyCringle

Hunter 27_75-84 Lady Lillie Sandusky Harbor Marina, Ohio
Little Current is a full service boat Harbor town. Never been to Spanish, but both are in the middle of prime North Channel cruising. As implied by the name, the North Channel is all protected from waves off Lake Huron.

Although I have enjoyed the west end around Detour a number of times, IMHO the east end around Little Current is the best cruising ground we have ever sailed.
Likes: CrispyCringle

Hunter 23.5 Oasis Patoka Lake, IN
The Spragge and Spanish areas may be just the ticket. Thanks much!

Yes the more I research it, the more it seems like we want to be on the eastern side. I cant wait for this trip!

Islander Freeport 36 Ottawa
Depending on how adventures you are feeling, and how much time you have, try getting to Tobermory on the North end of the Bruce peninsula. A great little town with a very nice harbour. If you are a SCUBA diver, or even into snorkeling, there are some wrecks around which you may find interesting.

Hunter 23.5 Oasis Patoka Lake, IN
Tobermory looks amazing! Thanks, I dont think we will have the time to get there tho. I think we will be putting in kind of mid way east and west of the channel.
S

Fun group to sail with. We've been up there a couple of times with them.

jon hansen said:
michigan state dock at detour may serve you well as a jumping off spot.
Click to expand

Hunter 23.5 Oasis Patoka Lake, IN
I found a great resource for planning a North Channel trip. Its a link to hi-res sat imagery that is much better than Google Maps. It only covers Ontario and is actually made for land topo info. But it includes excellent images of the waters surrounding land in the North Channel area.

It defaults to the topo layer on top of the satellite imagery. Be sure to use the Layers button, located on the very bottom left corner, and then the topographic slider to uncover the sat imagery.

NOTE: The website can be slow to load sometimes

Hunter 23.5 Oasis Patoka Lake, IN
Also, here are some links to other resources Ive found helpful:

Catalina 36 Bay City, MI
I'm in the longer term planning for a similar trip, and I've been recommended to research the Ports guide for this area as the definitive cruising guide: http://www.portsbooks.com/georgian-bay-the-north-channel-lake-huron/

Hunter 23.5 Oasis Patoka Lake, IN
Yes, I need to get the Ports Guide. Thanks!

Hunter 23.5 Oasis Patoka Lake, IN
Well, the trip is finally coming together. Leaving next weekend and we will have about 7 days on the water. Weather looking good at this point. Im pretty psyched. We are putting in at Spanish. We will probably stay in an area from Spanish to the Benjamines/Little Current and Gore Bay. But the actual itinerary is pretty flexible. Will post when I get back.
Likes: jon hansen

Hunter 23.5 Oasis Patoka Lake, IN
We made the trip. Complete success! We had a great time, nothing broke, and we didnt hit any rocks. Its an amazing place. The water is just pristine. Throughout the week I saw only two pieces of trash. Looked like a bait tub and a fishing glove. We had rain about 50% of the time for the first two days, then perfect temps and good wind the rest of the week.

Hunter 20 Lake Monroe
I was wondering how your trip went. Sounds like you had the trip we wish we would have had. I was wondering today how it all went for you.

Hunter 23.5 Oasis Patoka Lake, IN
We put in in Spanish, ON. We had intended to put in on a sunday and make a short sail to the Dreamers Bay area, straight south of Spanish, as the crow flies, but on the other side of the land mass. The drive up took a little longer than planned and by the time we got set up and rigged and put in the water a weather system set in. It was 5 pm so we just decided to call it a day and stay at the marina. Spanish was a good place to start. Nice marina and facilities, good ramp for out boat. And the grocery in town had what we needed.

Our little H23.5 in Spanish 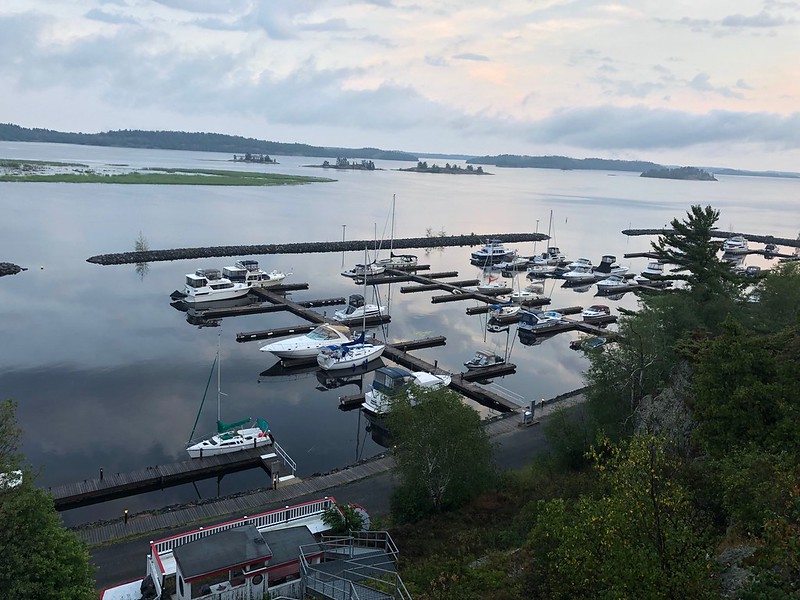 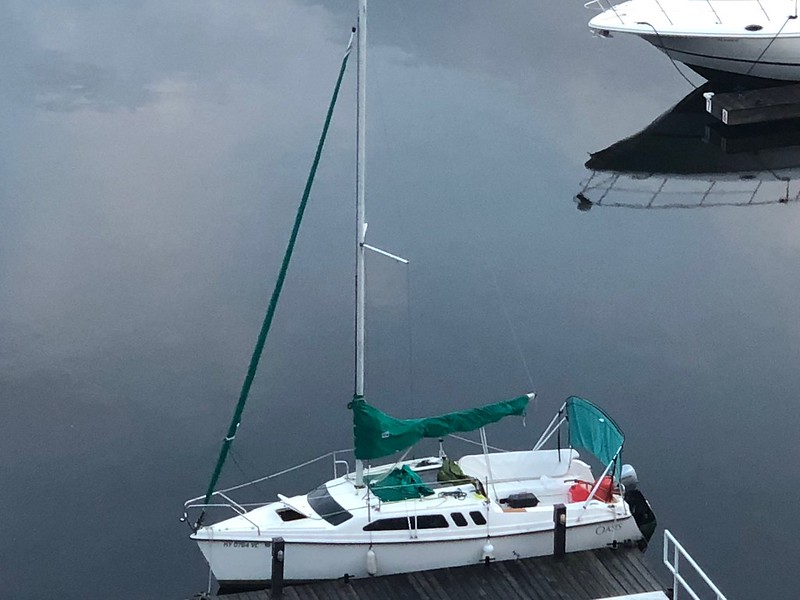 The second night out was in a nice little cove by ourselves near Oak Bay, north ot Hotham Island. Beautiful spot, but not a lot of shore line. I was surprised how dense the woods were around here. For the most part impassable, unless there is a trail.
Had to make a few attempts to get a good anchor set here. This was the first lesson learned of getting a good anchorage up here. A lot of rock bottom in places. I woke up to check position a lot in the middle of the night. 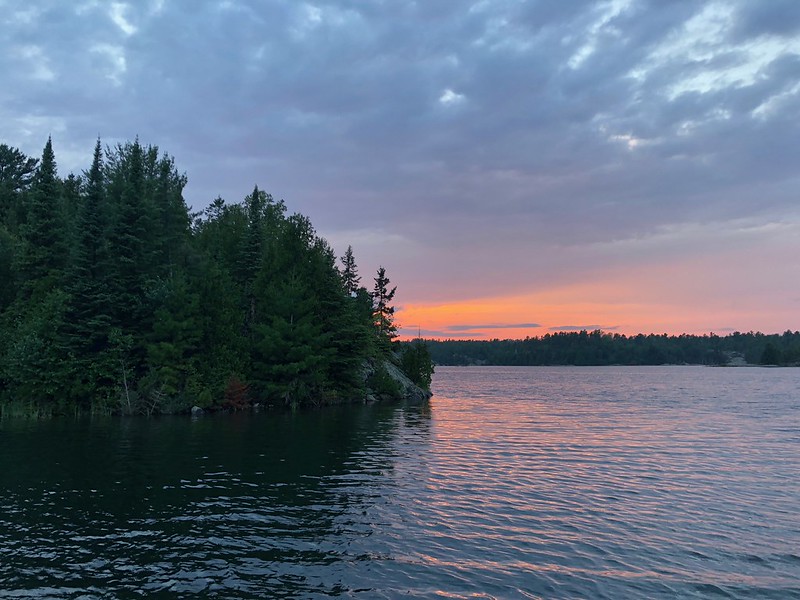 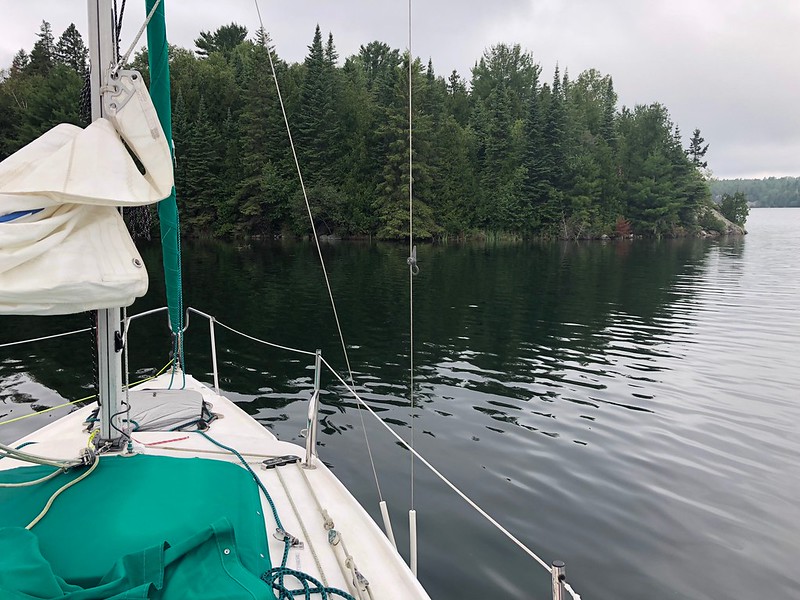 Hunter 23.5 Oasis Patoka Lake, IN
The third night was in the southern end of South Benjamin. There is a fairly large bay there and when we got there there was one other nice 50+ footer near the opening. One advantage to the swing keel, I can go down to less than 2' draft of need be. So we headed for the shallow north end. By the evening there were about 6 of us in the cove. I had trouble anchoring in this spot as well, so I tied off to shore on the bow, and a fellow boater with a dingy helped place a stern anchor behind us and it stuck well. 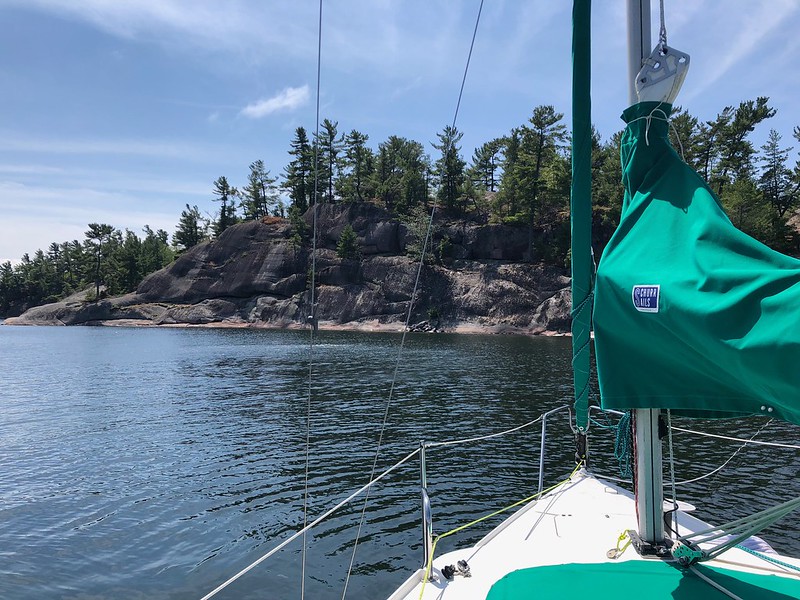 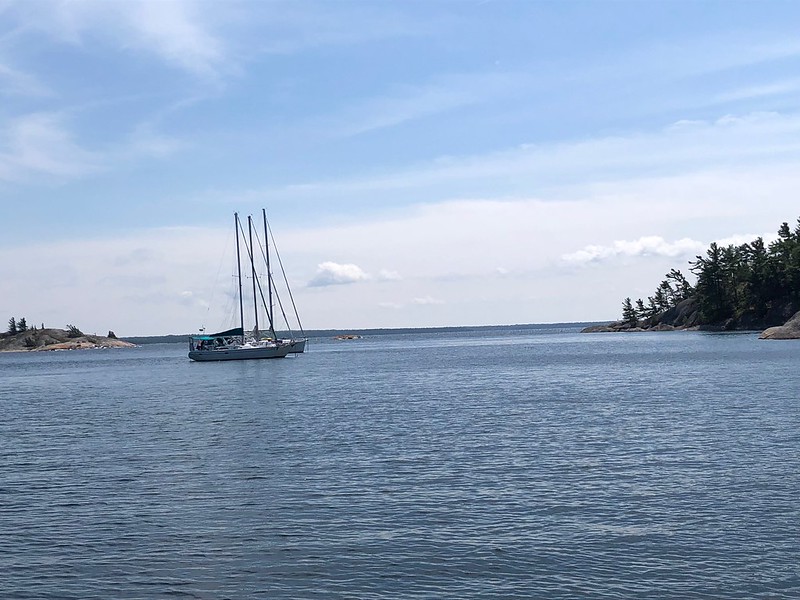 The the fourth day we decided to head to Gore Bay about 13 miles to the SSW. It was straight into the wind, which was about 20g25 according to the SailFlow app. What ever it was it was windy as heck. The main and jib both were reefed and we tacked all the way beating into 4-5 foot waves. Now mind you, me and my first mate are still very new, with only a few years sailing in a Indiana Lake. This was serious "high seas" for us, and we both loved it. The boat did great as well. It was getting over powered a lot and I actually had to de-tune the main trim to keep the heal under control. But my first mate was laughing like it was a carnival ride, to which I was glad. We plan on going blue water in a live aboard in a few years. 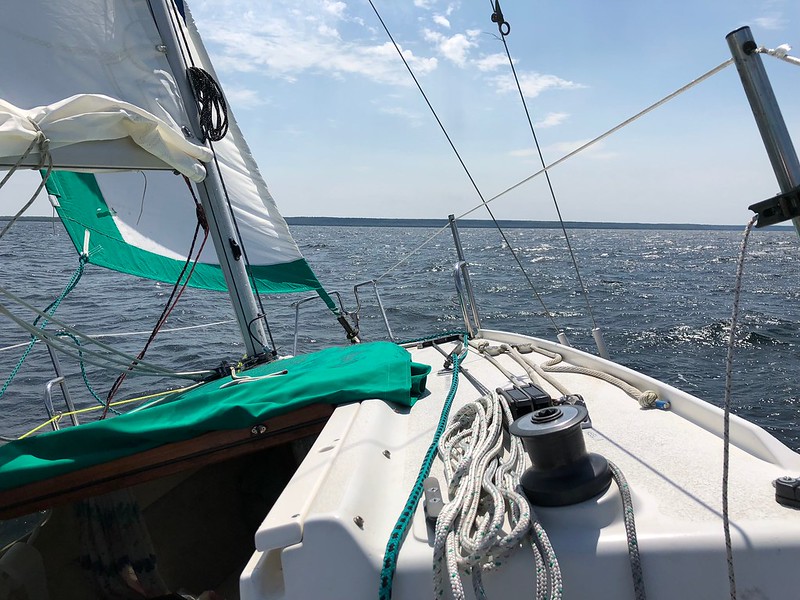 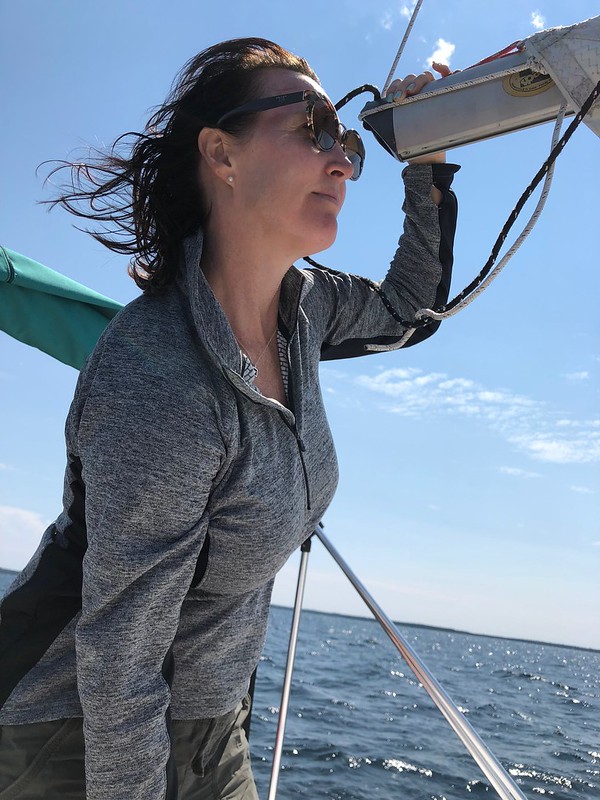 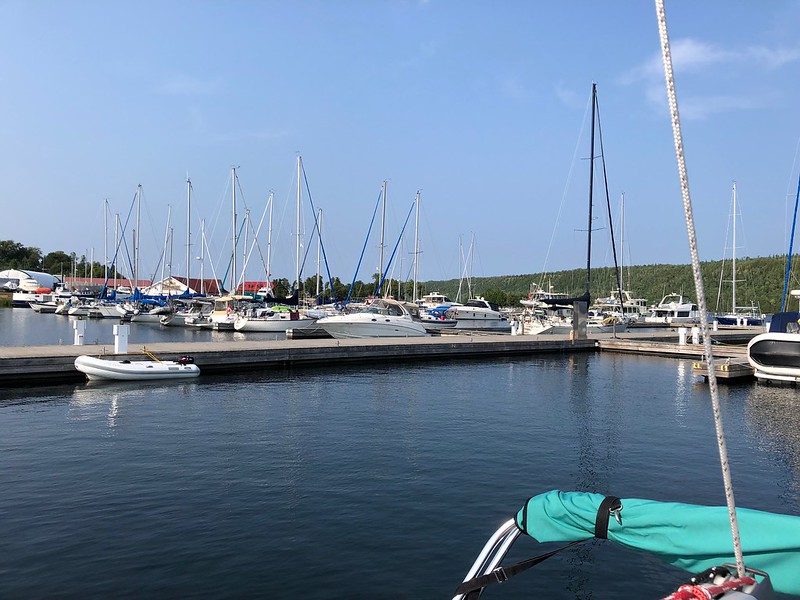 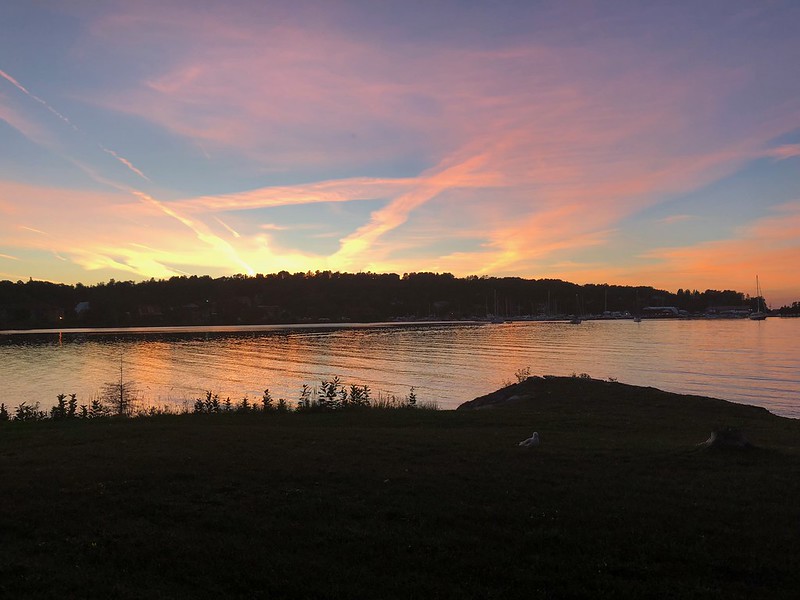 I love the water! 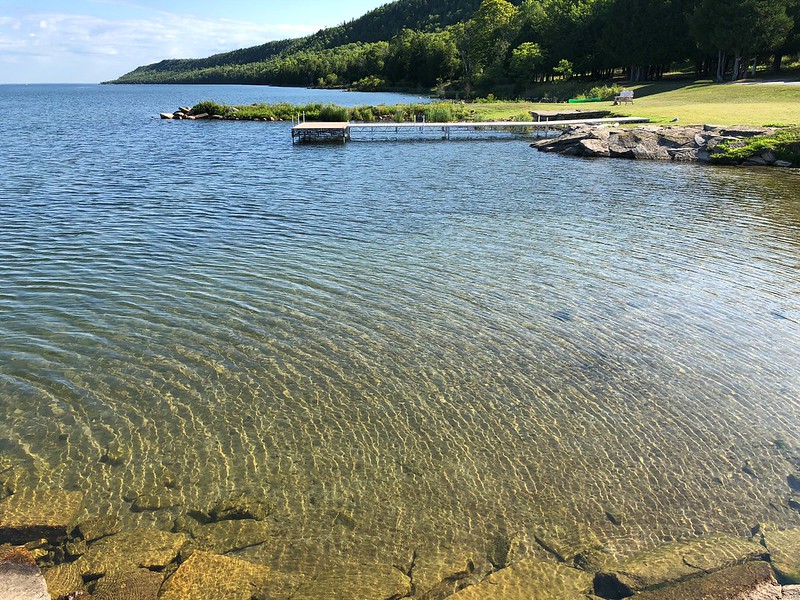 Hunter 23.5 Oasis Patoka Lake, IN
We spent one night on the boat in the Marina, and then had a planned splurge at The Inn at Gore Bay for one night. We needed the marina time. There were a few fixups I needed to do before heading out again. The marina was very well maintained. All slips had water and 30 amp service. and the showers were very clean. The town grocery was very nice and there was a decent chandlery and a really good hardware store in town. I decided I needed some chain anchor rode to try and get my anchor to lay flatter. Also, the trip over to Gore Bay and the waves brought to light a small leak someplace in the bow, which dampened the V-berth where we slept. Turns out the drain for the anchor locker has a thru-hull that was not seating well. Got some silicone for that. Had to tighten the stays. And two of my best purchases- dont know why I didnt ever get these before- a hose, the kind that shrinks when the water is off. And a tarp and bungees to make a boom tent. Small luxuries that make life better.

A quick plug for The Inn at Gore Bay. This was a great mid week stop. It has apparently been around for quite a while, but recently renovated. Its really nice. And the restaurant was delich. Its only about a ten min walk from the marina.
Likes: jon hansen
You must log in or register to reply here.
Share:
Facebook Twitter Email Link
Top Bottom