Hunter 33.5 Little Current, Ontario, CA
My auto helm ST4000+ has its own power feed and circuit breaker. My other instruments have a separate power circuit with breaker.
I am currently installing a network
connection between the autohelm (SeaTalk) and the other instruments (SeaTlkng). This involves using an interface kit. When I hook up the SeaTlkng cable, it powers up the autohelm without turning on the autohelm circuit breaker. I’m concerned that the wheel servo drive would take too much power from the SeaTlkng network but having two connected dc circuits isn’t good either. What is the recommended solution?

TBD Looking for my next boat CT
The autopilot drive motor connection should be a separate (additional) connection from the seatalk bus, and it should be powered whenever your instruments are powered. Otherwise you’ll get a drive error from the AP when it tries to turn the boat. Is there any reason not to put them on the same breaker? (Each fused separately with appropriate size fuses)
PS- not sure what AP course computer you have, but the ACU200 in my last boat had the option to power the seatalk bus.

Hunter 33.5 Little Current, Ontario, CA
The ST4000+ control head only has one power connection that I can see. Not clear how I can separate the circuits without cutting a wire in the SeaTlkng bus cable.

Fred
You have Control Head, fluxgate compass, and the drive motor. 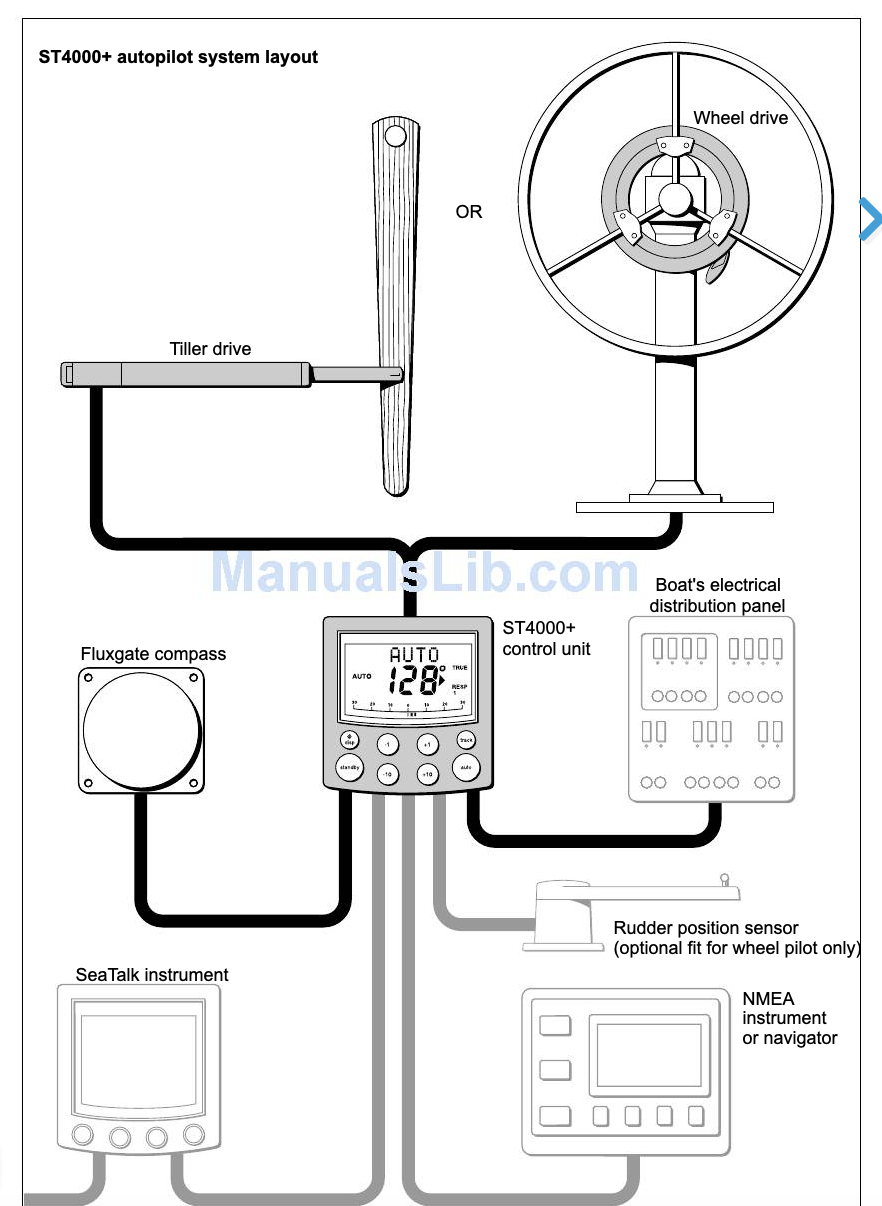 Fred said:
Not clear how I can separate the circuits without cutting a wire in the SeaTlkng bus cable.
Click to expand

Not in the NG cable but rather the flat seatalk cable from AP to rest of instruments, I forget which one however, probably red ?
At least that is how power between instruments and AP were separated on my boat before addition of nema 2000. When I added adapter et al I did not connect power lead on the 2000 adapter as it is powered already by (old) Seatalk connection.
Otherwise you are supplying power to 2000 network thru it's own power lead and the flat seatalk.
Don't know if I've helped or added to the confusion, for a start just disconnect power to the Seatalk ng network and see if it isn't still be powered by the Seatalk/Seatalk ng adapter cable.
Last edited: Aug 9, 2021

I don’t think that this would necessarily solve the problem. In case of excessive current one fuse might blow but power would still be present from the other source until/if that fuse blew as

Fred said:
I don’t think that this would necessarily solve the problem. In case of excessive current one fuse might blow but power would still be present from the other source until/if that fuse blew as
Click to expand

No, it solves the problem stated above. If you blow a fuse there is a different problem.
Likes: Fred

Calif. Ted said:
Not in the NG cable but rather the flat seatalk cable l
Click to expand

I think you’re right on that. Makes sense. I have three connections on that cable. I’m guessing 1) power 2) ground 3) data.

CAL 35 Cruiser moored EVERETT WA
Before rushing forward with a smile check the number of pins in your motor. Assuming you are trying to connect the motor to the display controller.

jssailem said:
Before rushing forward with a smile check the number of pins in your motor. Assuming you are trying to connect the motor to the display controller.
Click to expand

There are two connections from the St4000+ control head to the motor.

CAL 35 Cruiser moored EVERETT WA
That is what I thought. That 3 prong plug is not for the AP motor.
C

Fred said:
I think you’re right on that. Makes sense. I have three connections on that cable. I’m guessing 1) power 2) ground 3) data.
Click to expand

Exactly right, red, yellow and bare if memory serves, so usually only one instrument is supplied power and others added solely by seatalk plug which powers them also. Assuming your using the Seatalk/Seatalk ng converter if it is connected to seatalk it will get power from it. So if you also power it with the yellow power plug in center of adapter it would mess things up. I have power to one st60 instrument, others connected by seatalk. The seatalk plug from instruments to AP has red cut so AP is getting it's power from separate battery connection. Seatalk to Seatalk ng adapter cable then connects AP to the adapter which it powers from the AP. Everything then exits nema 2000 cable to your new MFD and everyone plays together well.
If your wiring is similar I suggest unplugging the yellow power in center of adapter and see if 2000 network still powered.

Hunter 33.5 Little Current, Ontario, CA
I went ahead and cut the red wire in the three conductor SeaTalk cable going to my ST4000+ control unit. Everything appears to work fine, I can get network info on the AP and I can now navigate on wind vane info. I still haven't figured out how to navigate on the chart plotter route. I also determined that I need to power up the AutoHelm before the other instruments to allow it to properly get recognized and communicate over the network.
Likes: Ward H
C

Fred said:
I still haven't figured out how to navigate on the chart plotter route.
Click to expand

You have to set the chartplotter to "Navigate" or "Go To" a waypoint first, then engage the "steer to waypoint" on AP.

Hunter 33.5 Little Current, Ontario, CA
Thanks... I did figure it out and it was actually simpler than I thought. Once I get the chartplotter to follow a route I simply set the autohelm to AUTO and then press TRACK and the autohelm follows the route instead of the magnetic heading. There does seem to be a bit of a conflict when I reach a waypoint since the chartplotter warns me of arrival (currently set at 500 ft before), if I acknowledge the warning the AP immediately steers the boat to the next waypoint and essentially cuts the corner, which is not always prudent. I think that I may need to reduce the 500 ft warning distance.
You must log in or register to reply here.
Share:
Email Link
Top Bottom