Catalina 30 My Three Sons Coyote Point
Hello all,
Thanks again for all the help that this forum provides. I have a 1988 Catalina MKII 30 and its really dark inside. Have been replacing the incandescent bulbs with leds, but was looking at putting led strip lighting along the overhead. Specifically where the teak strip is that runs the length of the interior cabin on either side above the windows. Has anyone done something similar and if so do you have any recommendations or pictures? The only information I found searching was from 2013. Thanks in advance.
Michael

Catalina '88 C30 tr/bs Oak Harbor, WA
I also have an 88 C30 and I replaced all of the bulbs in the original fixtures with bulbs I got from this site. LED bulds
I like this site because they tell you the watts, lumins per watt and total lumin output for each bulb they sell. We got the highest lumin bulb that they had for each bulb base type we needed. Great improvement in light output and power useage.
We also added a light right over the ice box and another over the sink. Make a huge difference in the galley.
C

Hunter 34 Red Bank NJ
Installed new led (red,green,blue) rgb strip lighting with multi functional remote in cabin and cockpit. I wanted to give more ambiance low voltage light in the cabin and cockpit. This upgrade was fairly easy to do after I came up with my game plan.
Strip lighting is very easy to install. Led strip light has markings approximately every 2-4 inches where it can be cut to size and wired to the power transformer that comes with the kit. Cut strips to length and pealed off self stick adhesive and stuck the strip to the fiberglass head liner just along the area where the jib traveler track is bolted thu the deck. Wired power transformer from 12 volt directional cabin light that is attached to fiberglass deck stringer. Repeated this on both sides of main cabin. I did the same in the v-berth and aft quarter berth along the head liner using a 12 volt cabin light as the transformer power supply. The new led strip lighting amazingly draw about the same power as one of the two bulb cabin lights.
The new lighting worked out great! The multifunction remote allows you to choose approximately 20-30 colors and light intensity.
Installed the led strips under all the lazarettes in cockpit as accent light. I like to use the red color function while out sailing because it's easer on you eyes.
This was a great project for approximately $40.00 per kit on Amazon, total project cost was approximately $120.00. I was truly amazed how much light you get from led lights vs a standard 12 volt bulb. Also was amazed by how little voltage led uses, roughly 75% less.
Note I found after I did this project is that the adhesive tape on the led role only lasted about four weeks after installation due to humidity and dampness in the marine Environment. Recommend to used clear silicon to glue it into place.
Mine is going strong with no issues for four plus years now. One of the best mods I have done, very pleased.
You can see pics under owner mods Hunter 34
Likes: Will Gilmore
M

Catalina 30 mkII - 1987 Long Beach Shoreline Marina
Just curious about those with LED strips, I've done the math and found that what I'd want to do with LED strips would use a bit more current than I'd want to save battery energy. I found it still better with single bulbs.
I've changed all my incandescent bulbs with matching LED versions. I replaced my cabin light which was pretty useless with couple of really bright fixtures so I can now see and work on something at night.

Here's what I replaced my cabin light with, I made a new double base for the two fixtures so I wasn't mounting two things, just one. 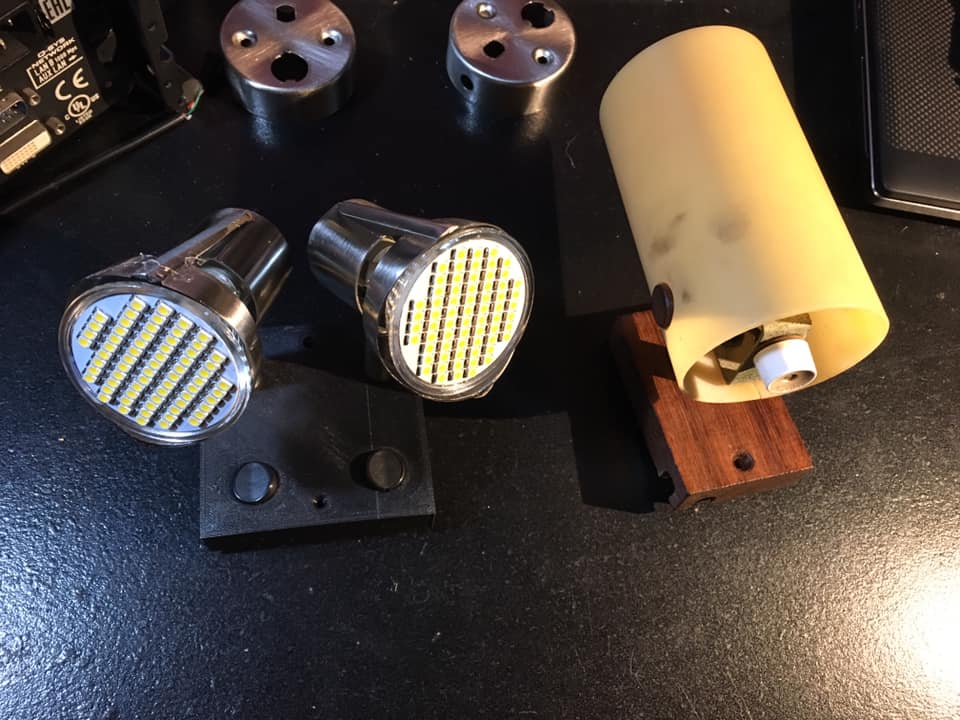 Catalina 30 mkII Blaine, WA
Hayden, do you happen to have a photo showing how you did the one over the sink? My wife has been after me for years to add a light there.
S

catalina 30 mkII Tall Rig bay city
West marine has LED Light fixtures. You can get warm white which looks like the incandescent lights a yeloow tint instead of a bright blue tint called cool white. They also have fixtures for the galley/bathroom area that have a low and high setting. They will update your boat with a modern look.
Steve

Ron20466 said:
Hayden, do you happen to have a photo showing how you did the one over the sink? My wife has been after me for years to add a light there.
Click to expand

I do not have any photos and will not be at the boat for some time. My boat is a Mk2 and it has a teak trim molding piece where cabin ceiling and wall meet. What I did was run a wire in a groove that cut into the back of the trim on my router table. I then used surface mount conduit from there to the light over the sink. at the aft end of the trim, I drilled a hole small enough to be covered by the trim but large enough to fit my fish-tape into. There is about 1/2" of space between the deck and liner in this area. I drilled the hole for the fixture over the icebox and was able to get the fish-tape down to it and pull a wire. Then I pulled a wire from under the shelf over the icebox where the liner / deck molds are not closed up. In the attached screen shot, the arrows are the wire runs and the boxes are the approximate locations of the lights. I pulled this photo from the net and it is not my boat so I did my best to draw in the system.

All-in-all, it is a very clean installation with only the short run of surface mount conduit exposed. The improvement to the light in the galley is fantastic.

Catalina 30 mkII Blaine, WA
Thanks Hayden, that all makes sense. I have a 1987 Mk II, so looks identical. I already have the light over the ice box, so part way there already
M

Catalina 30 My Three Sons Coyote Point
I was thinking running the led strip light on that piece of teak, warm white, maybe 300 lumens per foot that is dimmable to light up the entire boat.

Mjg407 said:
I was thinking running the led strip light on that piece of teak, warm white, maybe 300 lumens per foot that is dimmable to light up the entire boat.
Click to expand

I do not like the look of LED strip lights and my wife Really hates them. If I was to add them in that location I would get the ones that have the protruding bulbs and mount them through the teak in small holes to fit so that they did not show.
M

Hayden Watson said:
I do not like the look of LED strip lights and my wife Really hates them. If I was to add them in that location I would get the ones that have the protruding bulbs and mount them through the teak in small holes to fit so that they did not show.
Click to expand

I just got on board the boat and see what you mean. I was hoping the top of the rails were wider, so I could mount the strips facing up providing some up light.
M

Catalina 30 My Three Sons Coyote Point
On another matter, I’m failing the IQ test because I cant figure out how to get the bulb out of the nav table light.
You must log in or register to reply here.
Share:
Facebook Twitter Email Link
Top Bottom