Hunter 410 full time cruiser
It was time to replace my house batteries. I have been using golf cart GC2 batteries for 10 years, but wanted an upgrade. Researching through all the battery noise for marketing claims and real life off grid cruisers I ended up with 3 choices that made sense for me. 1 - 440AH GC2 golf cart batteries by far the best "bang for the buck" at about $500 and they fit with no problem into the 2 factory 4D battery boxes, 2 - 400AH LFP battery system with BMS/BPS for $1900, 3 - FireFly G31 (4) for 464AH at $1953. I tossed out regular AGMs and GELs as not of any advantage to me worth spending money on and leave it at that.

The only real advantage I could really find worth not just going the low cost GC2 route again over the other options was I they didn't have to be fully recharged EVERY day to not suffer from partial state of charge sulfation and the slow loss of capacity from this. I at first talked myself into the LFP for the ease of dropping in the small size system. But the more I thought about and researched the more uncomfortable I got about all my batteries being in a single unit that if anything failed all my house bank would be dead. I also got uneasy with the overcharging dangers and effect on the rest of my system that to be safe was going to be more $$$$ to be fully "right". There was also an issue with some insurance companies not covering the boat due to the batteries. So in the end got the FireFly batteries.

Took some extra work to fit it my OEM locations and I am glad I made up some foam models to verify they would. By taking out the port side battery box and shelf I was able to make a new base and install 3 batteries in that location by turning them sideways (filled the area under the base with foam for full support). These on paper had 2"+ of space, but didn't really due to cabling, but that could have been redone for more work and $$$.

The stbd side was pretty easy (if you do this look under that shelf at the nasty bilge). I took out the box and installed a anti-slide on the end and hold down rods.

In the end it came out pretty clean and even resulted in enough room for 2 more 6-packs of beer. 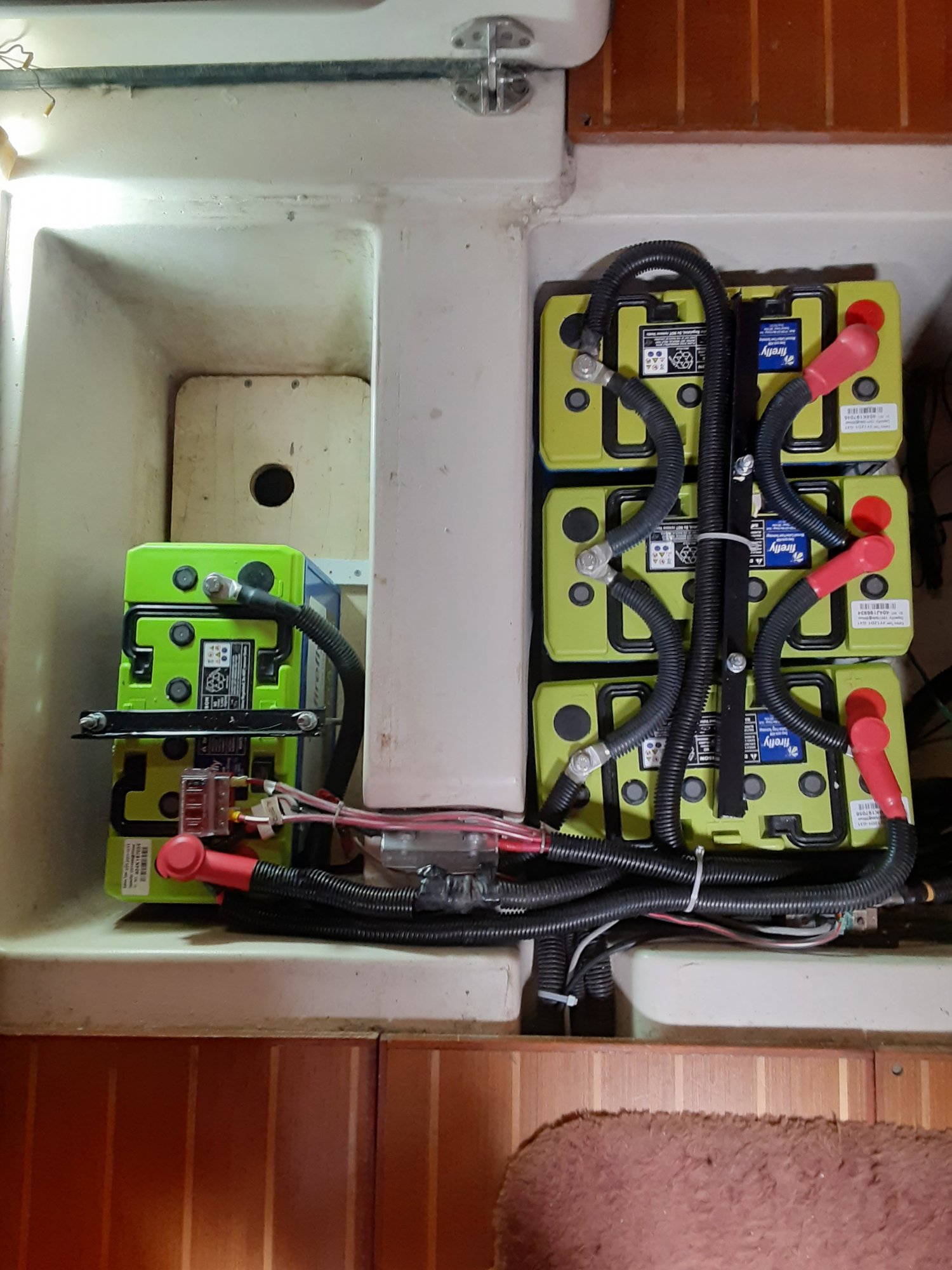 CC 30 South Florida
As a full time cruiser you should also take into consideration the availability for replacements. I have always considered that if I loose a wet cell battery in the middle of a trip nothing beats getting off the boat and hitching a ride to Walmart and coming back with a replacement. In my early days I was once gifted in the middle of nowhere a very used car battery that got me home. Consider warranty replacements and replacement availability both in the US and foreign places.
D

Hunter 410 full time cruiser
For cruisers warranties on things like this is a waste of time to think about as they are unmanageable.
B

Benny17441 said:
As a full time cruiser you should also take into consideration the availability for replacements. I have always considered that if I loose a wet cell battery in the middle of a trip nothing beats getting off the boat and hitching a ride to Walmart and coming back with a replacement. In my early days I was once gifted in the middle of nowhere a very used car battery that got me home. Consider warranty replacements and replacement availability both in the US and foreign places.
Click to expand

Gotta agree with Don on this one - warranties are the last thing I plan to count on when far far away from home and replacements are generally not too difficult to arrange in these days of global shipping (although cost of shipping, etc., might be pretty high). As a big fan (and owner) of Firefly batteries I'm convinced their advantages far outweigh the potential for failure and/or need for replacement. My solution for the possibility of a cell or battery failure will be to make the starting battery a Firefly in addition to the 4 for the house bank. Built-in replacement if needed and for a short time the starting battery could be substituted with a locally sourced 12V battery.

Hunter 36 Deale, MD
I'm similarly in my first season with Firefly batteries, having replaced two 4D monsters with two Group 31 Fireflies. I saved over 100 lbs which was partially causing a pretty typical slight list in my H36, didn't lose any significant available AH , and of course there's no having to worry about PSOC for the most part.

One of the things I struggled with initially was: What should my LSOC alarm be now on my Victron battery monitor? It used to be set at 12.1v, but with the ability of the Fireflies to go substantially lower in SOC than standard AGMs, what's the right alarm level now? After talking with MaineSail I felt comfortable setting it to 11.8v, which I think is roughly 30% SOC on the Firefly. Since my alarm sounds when it reaches 11.8v under load, there's a healthy margin there to get my act together and get a charging source started since I've got somewhere north of 30% left in the batteries at that point.

I was a little concerned about being able to start my 3YM30 with the batteries that depleted. But MaineSail assured me that those batteries were developed by Caterpillar for starting BIG diesels after sitting for extended periods of time, and that the relatively small starting load would be absolutely no problem at that SOC. He was right, of course. I've purposely run my Fireflies down that low at the dock just to test the theory, and there's no hint of a slow starter whatsoever. I may give it a go down to 20% SOC resting and see how that goes. But that'll mean staying at the dock for a couple of days, so not sure when that's gonna happen!

I'd be curious what other folks practice or experience is with their Fireflies and a safe LSOC alarm.

FYI I changed out my 11-year-old shore charger for a fully programmable 60a one and set up a custom charging profile for the Fireflies, per the manufacturer. I also recently replaced my OEM internally regulated alternator with an externally regulated upgraded one that has a specific Firefly setting on the regulator. Working out a few bugs, though they seem to be bugs in my boat wiring, not the alternator or regulator. It added substantially to the expense, but I think it'll make the Fireflies last as long as they're advertised. Good back and forth with MaineSail - purchased the equipment from Compass Marine and he's been helpful with questions.
D

Hunter 410 full time cruiser
At their heart the FireFly batteries are still lead acid batteries. They aren't going to just die a sudden deatlh, they will take a long drawn out route.
You must log in or register to reply here.
Share:
Email Link
Top Bottom