Catalina 36 MK1 94 Everett, WA
Checkout Moyer Marine for all things A4. It’s a good gas engine. If you want to go diesel, look at the Beta, they have Dropins just for A4 replacements.
Likes: Jazzydaze

Jeanneau Moorings International 50 Everett
Don't let the ditch scare you. It is a very nice cruise. With your draft you can make it on almost any tide. Just don't do it in the last couple hours before a minus tide. The last time I came through was after a -3 tide, I came through LaConner right at the 0 tide level. It was perfect for calibrating my depth sounder with my 6 foot draft, I dragged a little in several places, the worst was dead center between the last pair of red and green bouys at the south end of the channel where I slowed to 4 knots from 6.5 before pushing through.
On the other hand some of the worst water I've been in was when I went around the outside of Fidalgo Island heading for Kingston. It was dead calm, but there seemed to be 4 foot wind waves coming from both the North and SouthWest, plus a swell from the West. Then it got even worse where the current from the Straights split to go south into Admiralty Inlet & north to Bellingham. Then the wind came up, and with a following tide and sea, I had a great 15knot sail all the way down Admiralty Inlet.
Likes: Jazzydaze

CAL 35 Cruiser moored EVERETT WA
@jlp0217 the waves only seem to be coming from 3 directions. That’s cause they are all confused.

Gig Harbor can be made in 2 long days or 3 comfortable days. Both routes are interesting in their own way. With the ditch just choose a tidal time that is positive or neutral. Negative tide levels might find you waiting for the rise. Stick to the center of the channel and all will be fine.
The outer Juan D’Fuca route can be a lake or exciting. Great places along the way to stop.

Newport 30 Gig Harbor, WA
Hi all..finally got to the boat again. The mission was to LEDize the running, steaming and anchor light. I bet you can all guess which one is causing the head a ache. No power to anchor light!!! Power into the switch at panel. Ideas? Was up there..nothing at the socket.

CAL 35 Cruiser moored EVERETT WA
Trace the wire from the panel you state has power to the mast. Looking for frayed or possible short.
Wire should go to ground near panel. Check the ground is not corroded.

Jazzydaze said:
Hi all..finally got to the boat again. The mission was to LEDize the running, steaming and anchor light. I bet you can all guess which one is causing the head a ache. No power to anchor light!!! Power into the switch at panel. Ideas? Was up there..nothing at the socket.

Check again after dark, someone may have put a dusk to dawn switch in the circuit somewhere.

Newport 30 Gig Harbor, WA
Solved! Found an unpowered wire at box! Pretty new amp sipping LEDs all around now. Also found the holding tank...picked up spinnaler pole from PO, checked anchor...line is tiiired! Chipped off the asbestos/resin sealant in bilge and sanded some for glassing.

Spent the night on the boat..boy did it blow and rain!

Next question..when i picked up spinny pole..there was a shorter pole as well with a pulley on one end..maybe 3-4ft long...the other end has the typical pole c clamp deal. PO's wife wasnt sure if it went to the newport but thought it matched the spinnaker pole well amd had me take it. You guys know this mini pole?

CAL 35 Cruiser moored EVERETT WA
How Long? Does it collapse?
Could be an adjustable whisker pole. Used to hold jib out - extended to go downwind wing on wing...

Newport 30 Gig Harbor, WA
Super beefy..about 4ft long...looks just like a short spinny pole but one end has a pully instead of the clip. Not collapsable...seems short to hold a sail out.

Newport 30 Gig Harbor, WA
Hi all...a quick update as I havent been up to the boat much! Continued sanding and prepping bilge for glass, LEDs all around..got mast light working, freed sticky shifter lever, went over and neatened running gear and ordered new anchor rode as the current is tiiiired! Aaand...I found the holding tank! Wasn't sure if there was one. Good lord was that a search.. We pulled off the facing cabinetry of the head vanity and it was tucked waaay up there next to the sink. Moving right along! Heading up there tomorrow and the agenda is bilge some more..oil change and gas drain and fill. Lots left but mostly minor stuff. 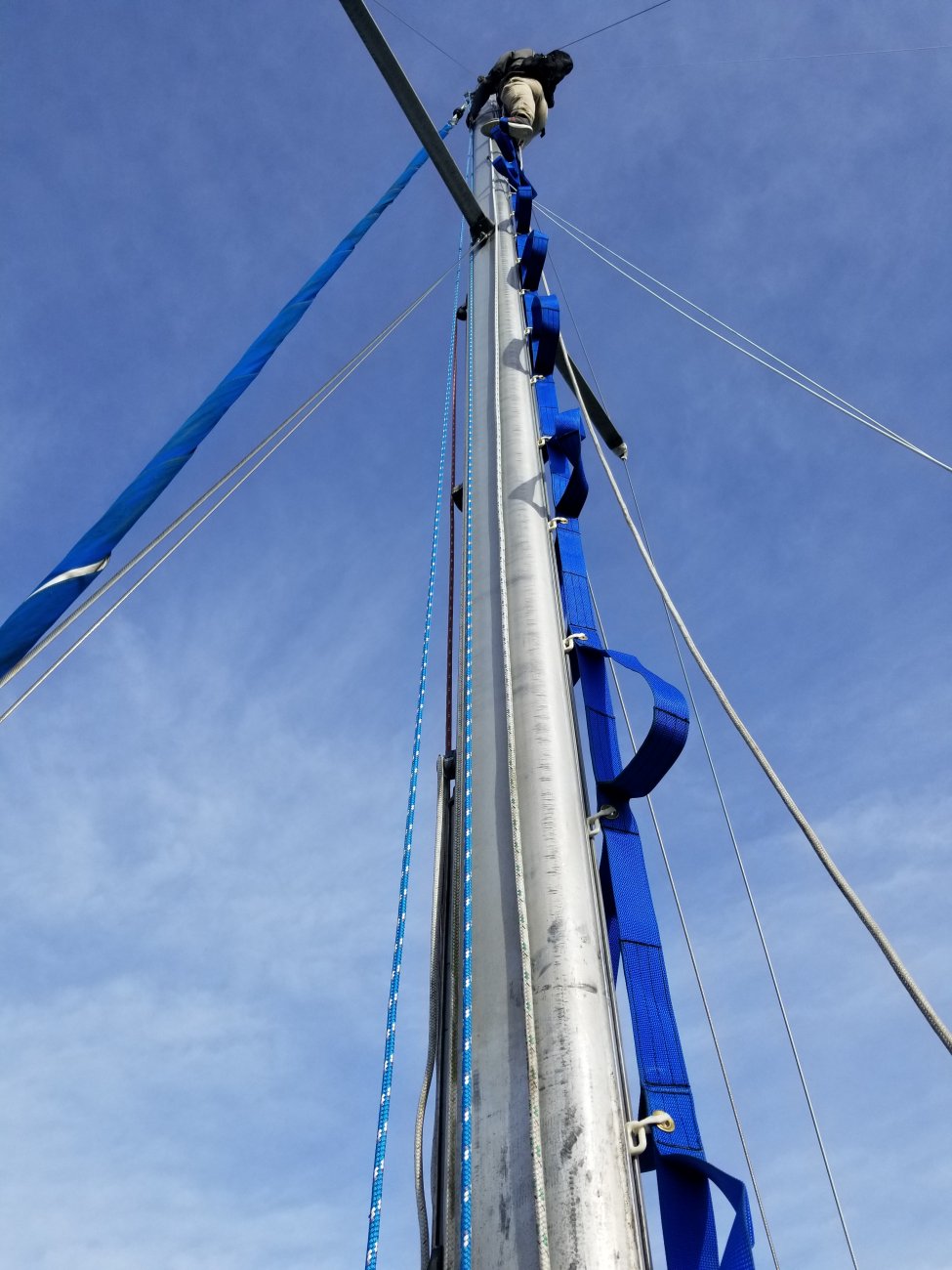 btw..2 thumbs up for the Mast Mate. Easy Peasey!

Hunter 34 Mandeville Louisiana
Short pole is probably a "Reaching Strut", used in conjunction with a spin pole as in this picture. Google "reaching strut" for more info.
https://www.flickr.com/photos/lawatt/471286467

Newport 30 Gig Harbor, WA
Yes that looks like exactly what I have! Thank you...reaching strut! And now Im at the boat with a new question...last here i was sanding and cleaning the bilge with hopes of glassing today. I come to find an inch of water in the bilge. As the boat is on the hard and the icebox is dry and no showers...i can't figure from the drawing 6-7 where this may have come from?? Boat appears dry inside otherwise... Can someone shed some light or ideas please.

- All dressed up with nothing to glass

Newport 30 Gig Harbor, WA
Plugging along.. got oil pressure gauge installed, battery condition meter, removed headliner to find a leaky winch, drained old gas...blah blah the tiny projects are endless. And of course ran into what the....????? The rod like thing was next to gas tank...

Maybe you guys can identify...

Jazzydaze said:
Maybe you guys can identify...
Click to expand

Looks like a weird gaff hook, maybe modified or manufactured to double as a spare pulley for...something...?

Newport 30 Gig Harbor, WA
Yeah...a possibility I was thinking..but what a weird contraption!

CAL 35 Cruiser moored EVERETT WA
Might work well to grab the line of a mooring bouy.

Catalina 36 MK1 94 Everett, WA
The tube with the red end is for sucking oil out of your engine or transmission -- there should be a thing that looks like a garden sprayer that the red part hooks into.