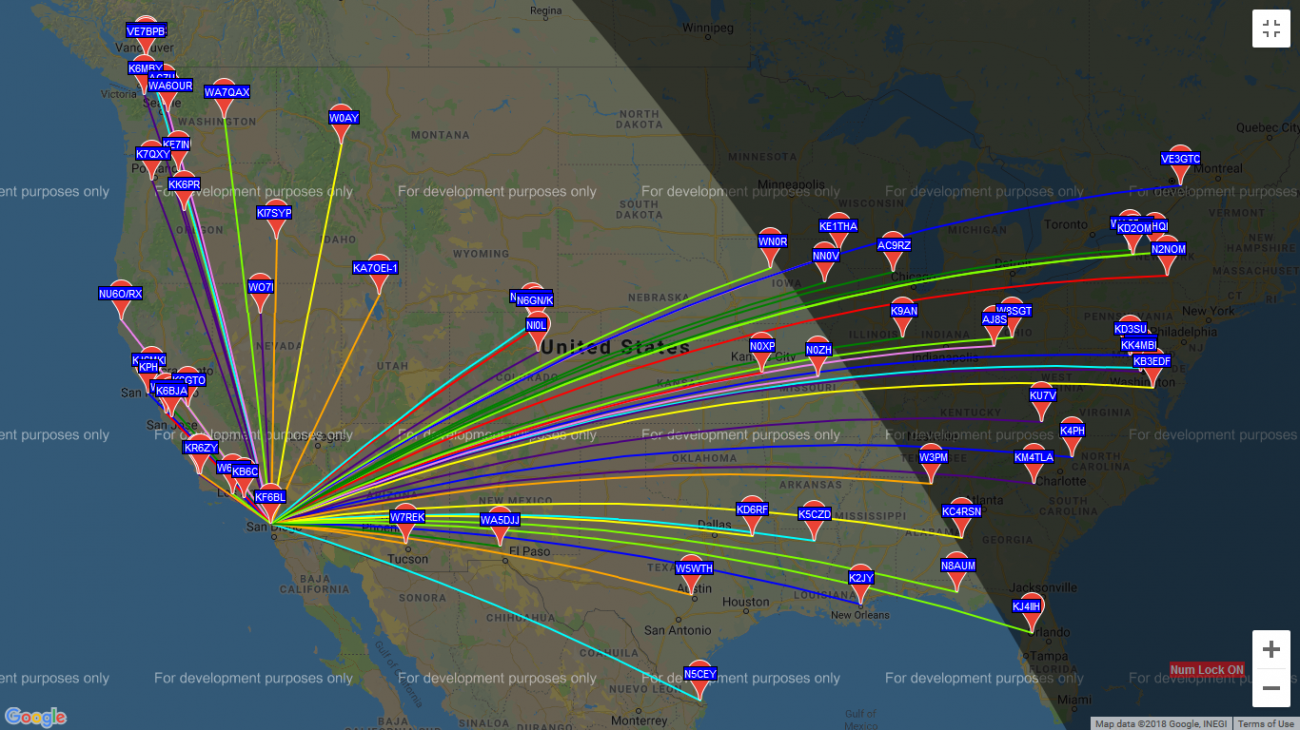 This is a WSPR (Weak Signal Propagation Report - most of these stations are using 5 watts or less) image of me on 40 meters. This image represents who I can hear and who can hear me. However, if I click on my call sign I see that all those WSPR stations are hearing me. I only hear one of them. WTF over?

Not sure what is going on here. I accept this as a challenge to find out why I can be heard just fine but cannot hear to save my life. It could be anything from the type of wire I am using for my antenna, my "counterpoise", or maybe the 4:1 unun or balun use to block common mode currents. Not sure.

Just venting. I will start to investigate and report back.
Likes: BlowMeAway

Lancer 27PS MCB Camp Pendleton KF6BL
No, the receiver is wide open. But maybe I have a filter that I don't know about. Didn't think of that until you mentioned squelch. I'll check that and see. It is a Yaesu FT857D.

Lancer 27PS MCB Camp Pendleton KF6BL
I played around a little and it is not any particular filter in the radio. I am going to chalk this up to propagation, low SFI, and how my counterpoise is set.

The propagation and SFI I can do nothing about. But the counterpoise is a different story. It is a DIY KISS-SSB counterpoise. Consist of as group of wires and just resting on a patio cover. Probably needs to be better built. This poor counterpoise is falling apart. The whole concept was an experiment to see if my 35.5' wirerope antenna with a DIY KISS-SSB would work. The concept is sound except I need a good sea water contact which I do not have here at home. So I guess it is as good as it gets.

This is still a challenge and I still want to get better results while the bands are still down. I do work the Maritime Mobil Service Network from time to time when conditions are good. Hopefully the solar activity will start to improve as this cycle has proven to be one of the weakest in a hundred years.

Sorry, but it looks like it will go even lower in the next 22 years.
10 meter ban is going to be more like 2 meter.
Jim...
Likes: jssailem and Brian D

Lancer 27PS MCB Camp Pendleton KF6BL
I'm reading the same thing, Jim. But I am allowed to have some hope. LOL

Brian D said:
I am allowed to have some hope
Click to expand

Get a small motorized dish antennae and do a LUNAR bounce. It works and about the same "open" times for 40 meters.
Just think of the ionosphere clarity in your signal. Plus you will be ready to hear the new Moon Base radio transmissions.
_______

Brian D said:
I only hear one of them. WTF over?
Click to expand

Lancer 27PS MCB Camp Pendleton KF6BL
Well, I have chased LEO satellites and that was fun, not. If I had a tracking beam it would be a lot more fun. But a rubber ducky antenna does work, just hard to work someone when they are talking all the time. Moon bounce... don't get me started. LOL

So I think I may have solved the issue. As I mentioned before, counterpoise. I moved it around and am now hearing better. So it is possible that I have limited my own capabilities by putting out a minimum number of counterpoise. Again, this was for testing to see if it worked before going on the boat. And it did work. But I think for some more serious operations here at the house, I need more cowbell... er... counterpoise.

Alden 50 Sarasota, Florida
Brian
Have you tried some of the antenna modeling software? They are pretty good at depicting how and what changes affect your radiation pattern

Brian D said:
I moved it around and am now hearing better.
Click to expand

Just looked up the KISS-SSB. It makes sense that moving it about could hav ean impact on your reception, though their statements are that you can place it in just about any configuration and it will work... That seems like a bit of hyperbole. Will be interesting to see your on the boat experience.

Lancer 27PS MCB Camp Pendleton KF6BL
Well then, John, you might be interested in reading this page...

It is an analysis on the KISS-SSB and a DIY KISS-BBS clone.

It is an analysis on the KISS-SSB and a DIY KISS-BBS clone.
Click to expand

I also have a KISS. Now, if I can find time to study for my General, I might just have an opportunity to use it! Happy New Year.
Likes: Brian D

One of the best ARRL magazine stories, of my early HAM years, was about this HAM who built a dish antennae in the ground, in his yard.
It was HUGE and he had it so the MOON would pass in focus of the fixed Dish for about 4-6 hours per night.

The HAM story background...
1) Moon dust was a problem, since the LEM astronauts had to sleep in their hard suits.
2) The lunar dust would barely settle out in time for them to eat, etc. Dust went everywhere.
3) Apollo 15 [my memory] astronauts were doing geological borings with a Auger on the MOON surface.
4) Astronauts lunar weight was not enough to resist the Auger twist and turned them,, which tossed them to the surface. Dust all over their suits.

The HAM's Dish antennae could pick up the "backpack to backpack" radio transmissions that were NOT relayed back to HOUSTON.

In those days, the the term "Expletive Deleted" was in common use....
The HAM published, in ARRL Magazine, the backpack transmissions while they were cussing the geologist who designed the AUGER.
To put is mildly, the article was full of "Expletive Deleted"

Lancer 27PS MCB Camp Pendleton KF6BL
It appears that my radio was overdriving the audio processor in the computer. In other words, the audio was too hot therefore distorted. I have reduced the gain of the audio output on the radio to a point of about 0dB. Now the computer is reporting more stations being received.

Hunter 430 Waveland, MS
Radio: Can you hear me?
Computer: Quit screaming so I can understand!

XOL: Brian!! That radio is unbelievably LOUD!!
Brian: Ok I just set it to a believable level!