Help with identifying my boat?

Hobie 16 & Rhodes 22 Skeeter Charleston
Often the HIN is stamped in and not a plate. If the boat has been painted a few times, it might be hard to see it. For example, 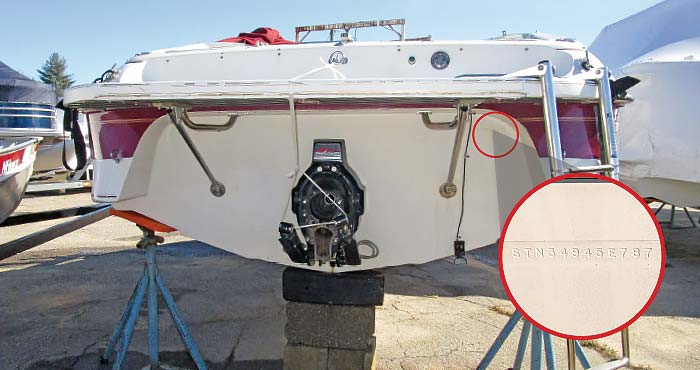 O' Day 14 Auburn
I'm going to go out & try the old paper & pencil trick.. see if something lifts out of the paint...
Likes: rgranger

O' Day 14 Auburn
New pics up.. and I found my 1st identifying mark on the boat, in the cuddy area, underside of the deck:
My first sailboat! – The Goose Report
D

Sirius 21 Pelican Yacht Club, Manitoba
My HIN is just below the pelican in the fibreglass. 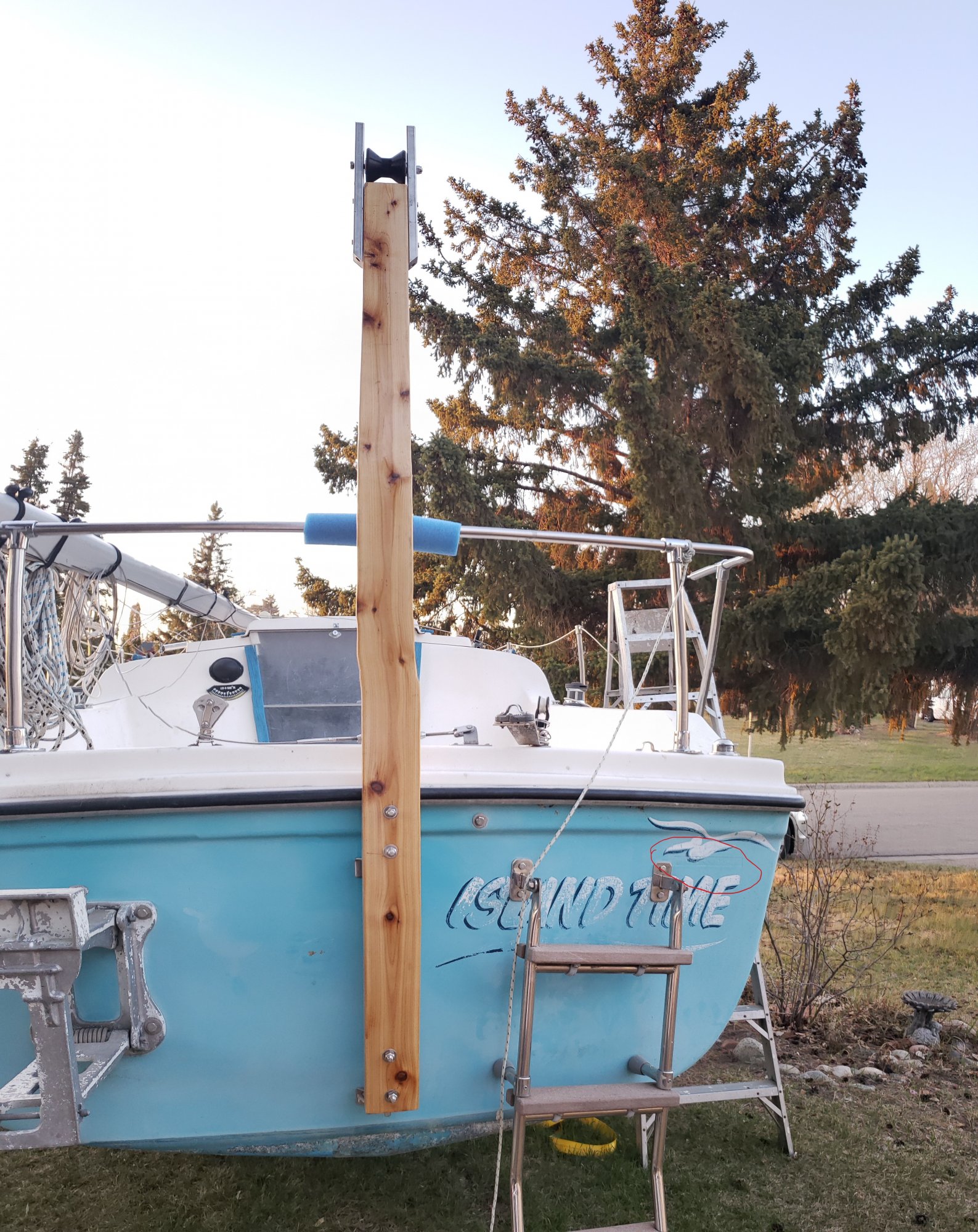 Hunter 26 Carter Lake, Colorado
No HIN means older than Nov 1972, if that helps narrow it down any.
Likes: rgouette

twistedskipper said:
No HIN means older than Nov 1972, if that helps narrow it down any.
Click to expand

Hobie 16 & Rhodes 22 Skeeter Charleston
So I just now did a google on ASTRON and Astron Marin came up as a manufacturer of boats. I'm guessing that is what you have.
Likes: rgouette

O' Day 14 Auburn
yeah, I did that as well.. was hoping to find my boat, but no luck yet.
Thanks for looking!

Slickcraft 26 Greenport, NY
I looked at this pretty comprehensive list:

www.angelfire.com
And, no I didn't see it. They even had my Mark 25, of which only 17 were built. Still stumped.
Likes: rgouette

It's funny, I figured that the "Viking/warrior" logo was going to be such an obvious clue, and that we'd find it in minutes...
Shows ya how much I know...

O' Day 14 Auburn
The mystery of this boat continues...
I just removed the transom motor mount to look for anything... nothing but smooth paint.
I did just snap a bunch of pics, of the undersides of the bow, gunwales, and stern areas, if anyone is interested.
The Styrofoam is troubling me:
1) When did Styrofoam come into usage aboard sailboats?
2) What maker would ever leave it exposed as shown?

My first sailboat! – The Goose Report

Hobie 16 & Rhodes 22 Skeeter Charleston
Well regardless of what she is, she looks well built. Maybe they went out of business quick because they did not "build" enough margin into their designs.

The snaps around the coamings implies some sort of cover. Might be worth investigating that as well.

O' Day 14 Auburn
I had the same thought about those "tie points", or whatever they're called.. a great way to secure a cover..
Glad to hear your comments about her being well built.. that's at least encouraging..
And, I have a cool Viking head logo built into the fore deck!

Beneteau 310 Cheney KS (Wichita)
The Styrofoam is there for floatation. Back in the day, there was no "encapsulated" foam. Lot's of older built dingy's had plain Styrofoam inside for floatation. I also seem to recall some sailing dingy's built entirely of Styrofoam, name escapes me at the moment.

From Wikipedia:
The Snark is a lightweight, two-person, lateen-rigged sailboat manufactured and marketed by Meyers Boat Company of Adrian, Michigan. The Snark was initially marketed by Snark Products, Inc. of Fort Lee, New Jersey and has been marketed with numerous slight variations, most prominently as the Sea Snark, Super Snark and Super Sea Snark.

The sailboat was marketed heavily in numerous co-branding campaigns. The New York Times reported that the Sea Snark outsold all other sailboats in 1970[1] and that over 48,000 Sea Snarks were sold in an 18-month period in 1971 via a mail order campaign with Kool Cigarettes.[2] By 1973, over 200,000 Sea Snarks had been sold[3] and The New York Times reported that by 1976 that Snark had built more sailboats than any other manufacturer.[4] The manufacturer currently estimates that nearly a half million[5] Sea Snarks have been manufactured since 1958.[6]

Noted for its 11' expanded polystyrene hull and marketed as "unsinkable", a 1971 Popular Science reviewer doubted there was a sailboat "more foolproof".[7] Originally, the purchase of a Sea Snark included a 16 page booklet on "how to sail",[8] and a 1975 Popular Science article described the Sea Snark as the least expensive and lightest sailboat on the market.[9]

JRacer said:
The Styrofoam is there for floatation. Back in the day, there was no "encapsulated" foam. Lot's of older built dingy's had plain Styrofoam inside for floatation. I also seem to recall some sailing dingy's built entirely of Styrofoam, name escapes me at the moment.
Click to expand

ok thanks for that info!
Don't spose you know of any way folk can encapsulate it somehow, to keep it from falling apart gradually?
Some kinda spray poly...? I dunno..

rgouette said:
ok thanks for that info!
Don't spose you know of any way folk can encapsulate it somehow, to keep it from falling apart gradually?
Some kinda spray poly...? I dunno..
Click to expand

The Optimist Class uses airbags for floatation. Google "Optiparts airbag" to see what's out there.

Slickcraft 26 Greenport, NY
My Anchorcraft runabout just had some foam - presumably sprayed - in different places. Under the bow deck, under the dash, maybe under the transom deck if I remember. It was some self expanding foam - you could tell from the lobular shape.

Hobie 16 & Rhodes 22 Skeeter Charleston
I’ve used spray foam on sailboats before. Not for floatation I was filling in spaces that liked to trap water. If you go that route I’d use firebrick foam. It is more dense Order 3M Fire Block Sealant, 12 oz., Orange, Aerosol, FB-FOAM-ORANGE at Zoro.com. Great prices & free shipping on orders over $50 when you sign in or sign up for an account.

If you want to add floatation, I’ve used the pink foundation foam sold at Lowes

I confess I did a google image search using a cropped image of your sail logo. Google thinks it is a bison...
You must log in or register to reply here.
Share:
Email Link
Top Bottom