Catalina 30 Forked River
When I was changing out the pencil zinc I noticed 1 of the supports had broken free. Any suggestions on the best way to reattach it will be appreciated.

Catalina 34 224 Maple Bay, BC, Canada
Jac, what engine? If it's an M25 or M25XP, here's what I did
Heat Exchangers 101: Sources for replacement Good Guys at Sendure

The story ^^^ is not specifically or only about your question, but what I did about the HX itself is related to my broken HX bracket and its supports.

CAL 35 Cruiser Portland OR, moored EVERETT WA
@Jac123 pictures help to understand the specifics of your issue.
Here is one of mine.

Is "the support" which you describe as "broken free" at the end of the red arrow?

Catalina 30 Forked River
M25xp
Thanks for the info

Beneteau 45F5 51551 Port Jefferson
if it's #12 in the link Stu posted, when the bracket on my m25XP heat exchanger broke and I had it welded at the radiator shop that cleaned out the exchanger. I forget how much I paid but it was much less than $129
Likes: Jac123

There were 2 different type Hx mounts (because there were two different transmission bell housings) used on the XP, depending whether it was an early or a late serial number.

If that’s yours, that is the 2nd type of mount used and that too was changed in later models. Those have two separated brackets, not brazed to the Hx itself. The reason for the change is obvious.
You could buy those brackets and replace just the one side (until the other bracket breaks off, of course.) The Hx body is held to the bracket with a hose clamp. If that’s your type and you need more info - PM me or reply here (but I don’t always monitor this forum.)
Likes: Jac123

Catalina 310 Scott Creek, VA
These are an option for the XP, make sure you install facing the right way because I pretty sure you cant remove the tranny dipstick if you dont. 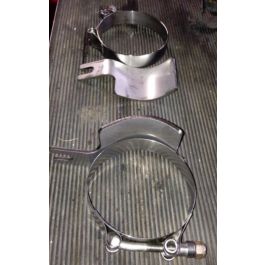 Stainless Steel Bracket set for Universal Heat Exchanger Note there is one for the 3 inch series and one for the 2 inch series. Order based on your heat exchanger diameter. The coolers that use this mount are: 302631 200420 201027

Catalina 30 Forked River
Thanks to all who replied. I bought the kit from Catalina Direct. Installed the left support and tighten up the bolt on the right support.
All seems good to good.
You must log in or register to reply here.
Share:
Facebook Twitter Email Link
Top Bottom