Ever get one of these?

Lancer 27PS MCB Camp Pendleton KF6BL
Back in the '80's the FCC issued certificates when one upgraded to the next level Amateur Radio License. I never got one for any of my upgrades except my Extra class.

I don't think the FCC is doing this anymore. And like I said, I don't know if any other class of license got one of these. Did you? 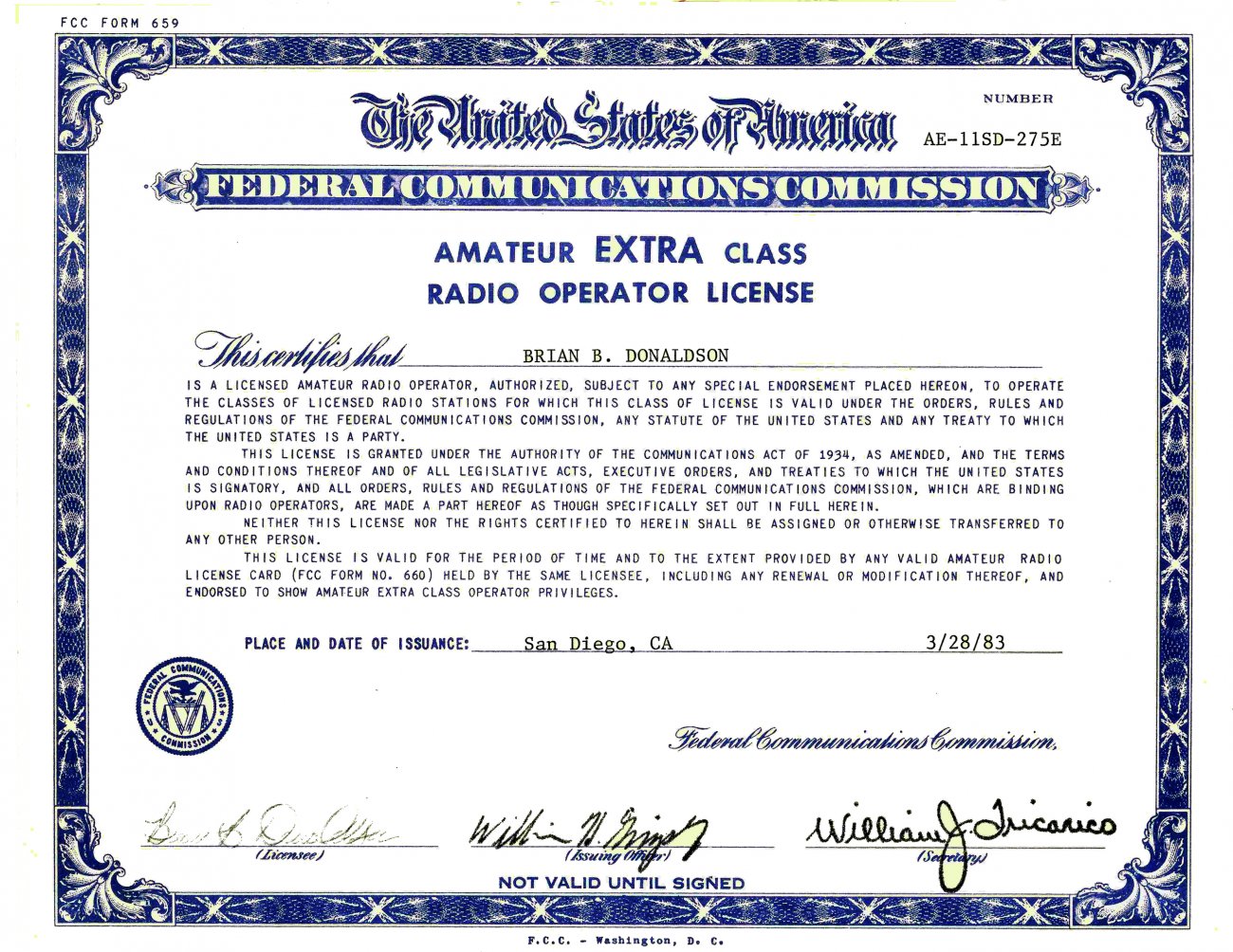 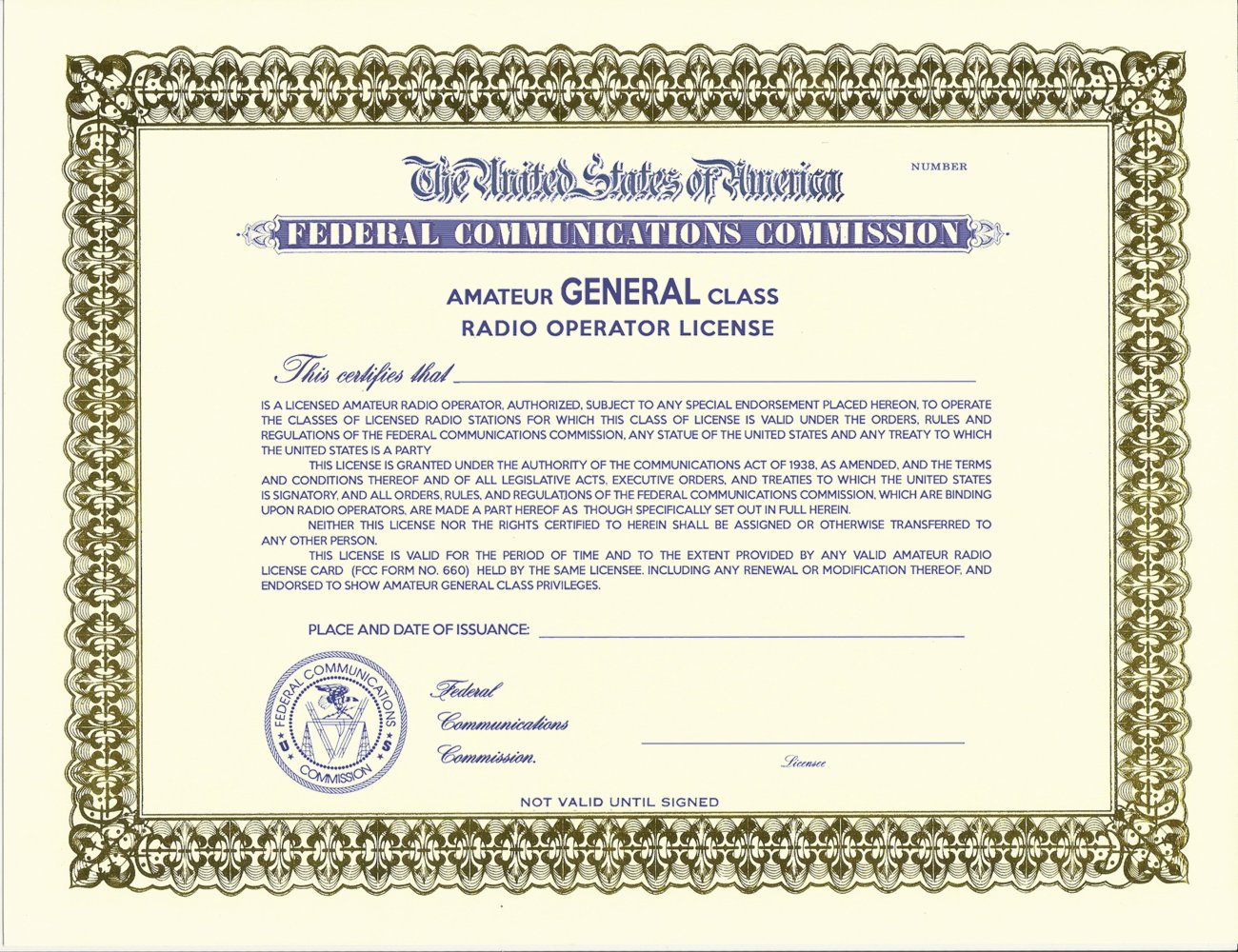 I have one for each class from Tech to Extra. I got rid of the blue edging and printed on an 80# gold leaf blank certificate. Looks really nice, if I were a General. LOL
Anyway, what do you think? Does it look nice? And, did you ever get a License Certificate like the one above?
Likes: JamesG161 and kloudie1

Hunter Legend 40.5 Shoreline Marina Long Beach CA
Nice. I think you have to download and print your own license now as I recall. Nice job. Sigh. Need to work on my General.

Lancer 27PS MCB Camp Pendleton KF6BL
Yeah, you can go to the FCC and get a copy of your operating license. The one above is more of a certificate than an operating license. I don't think the FCC does these anymore. Shame, they are so nice.

Get that General. It isn't that hard. More of a time thing than a knowledge thing.
Likes: JamesG161

Hunter 430 Waveland, MS
I had my General back in the days of Morse 13 WPM. I renewed on time.
Then I went to the X Call sign, with my 350 Watt and Wilson Vertical 40 meter. There was a mix up with Mexico and I didn't transmit from there. 4 years to return back to USA.

Returning back to USA, I called the FCC and they told me I didn't need to renew for 10 yrs.
I believed them.
Katrina came along and time now for HAM again.
Whoops my License had lapsed.

My Wilson Vertical was missing from my return Mexico packing. Lost? Yeah right!
My packing list said "tubes" not Antennae. No refund.
When I bought this boat, the PO was a Ham and had the boat set up for antennae and said he would sell the set up for $1000. I offered $800.
My stupidity about Boat Ham got in my way.

Later I discovered he had not only offered a $1200 radio, the tuner, Computer Input terminals, and the boat ground plane, but fully operational. Value ≈$1600.
______
I have been on the edge of retaking the test. Got my new General License book, read up. Ok I ready right?
Went to AARL and took the practice test.
I didn't pass. Closest Ham to give the test, as a volunteer 150 mi away.

Seems too hard to recover my General now.

Hunter Legend 40.5 Shoreline Marina Long Beach CA
Jim, what was the issue with Mexico? My understanding is that a couple of year ago, they suspended most Mexican amateur licenses, although they are trying to rectify that. Also, I understood it was a six month wait to get a visitor permit. When I go, I hear a lot of chatter on the six or so two meter repeaters around Ensenada.

Rick D said:
what was the issue with Mexico?
Click to expand

Partially.
When a US citizen gets a resistant Visa, you are under Mexican "FCC" laws. My company had never had a relocation request of this type ≈1990. Both sides of my company said, "No problem". I was to be assigned a Mexican Ham Radio call sign. I forget the exact way, but I would identify as X-12456 with my WD4. When they were to approve of my Transmitter at customs, didn't happen.
At that time period, C-Band Satellite TV was not allowed in Mexico. It was still considered "sensitive electronic" equipment.
Revenge?
Jim...

PS: I had not heard of Ham suspensions.
PSS: During the early 1990's Mexico had NASA put their first communication Satellite, Morelos I. Because of poor Telephone service, my company actually wrote the first Mexican "FCC" regulations so that we could bounce from Mexico to USA, privately. Morelos I had been orbiting for 2 unused years. We were the first.
Likes: Rick D