Catalina 22 Minneapolis
My 1974 Catalina 22 came with two external wire-to-rope halyards that tied off to cleats on the mast. I put up with that for one season! In the spring of 2015 I converted to internal halyards.

I purchased the masthead sheaves from Catalina Direct. They fit perfectly and allowed me to run four halyards, instead of just two.

My mast is the oval shape, so fitting the exit blocks was a bit of a challenge. I also wanted all four to exit on the same side, which raised additional issues.

I some small spacers out of G10 for the upper exit block so that it would protrude from the mast and the lines wouldn’t interfere with the run of the lines for the lower exit block. I used thickened epoxy to hold everything in place, then drilled and tapped for screws.

I used a deck organizer to route them back to a clutch at the cockpit. (Only a triple shown here, a double was added later on the other side of the handrail so I have all four halyards and my reefing line in clutches.)

I love having the lines run back to the cockpit. It makes it so much easier to single hand. You barely have to leave the tiller to raise a sail, and if you want to drop one all you have to do is pop the clutch.

When I have guests it’s much easier to get them involved. If I had said “Scramble up the mast, pull the red line, then tie it off with a cleat hitch” I would have received blank stares. But now I can say “Reach over your shoulder and pull the red line. Check it you, you’re hoisting a jib, you’re a sailor!” 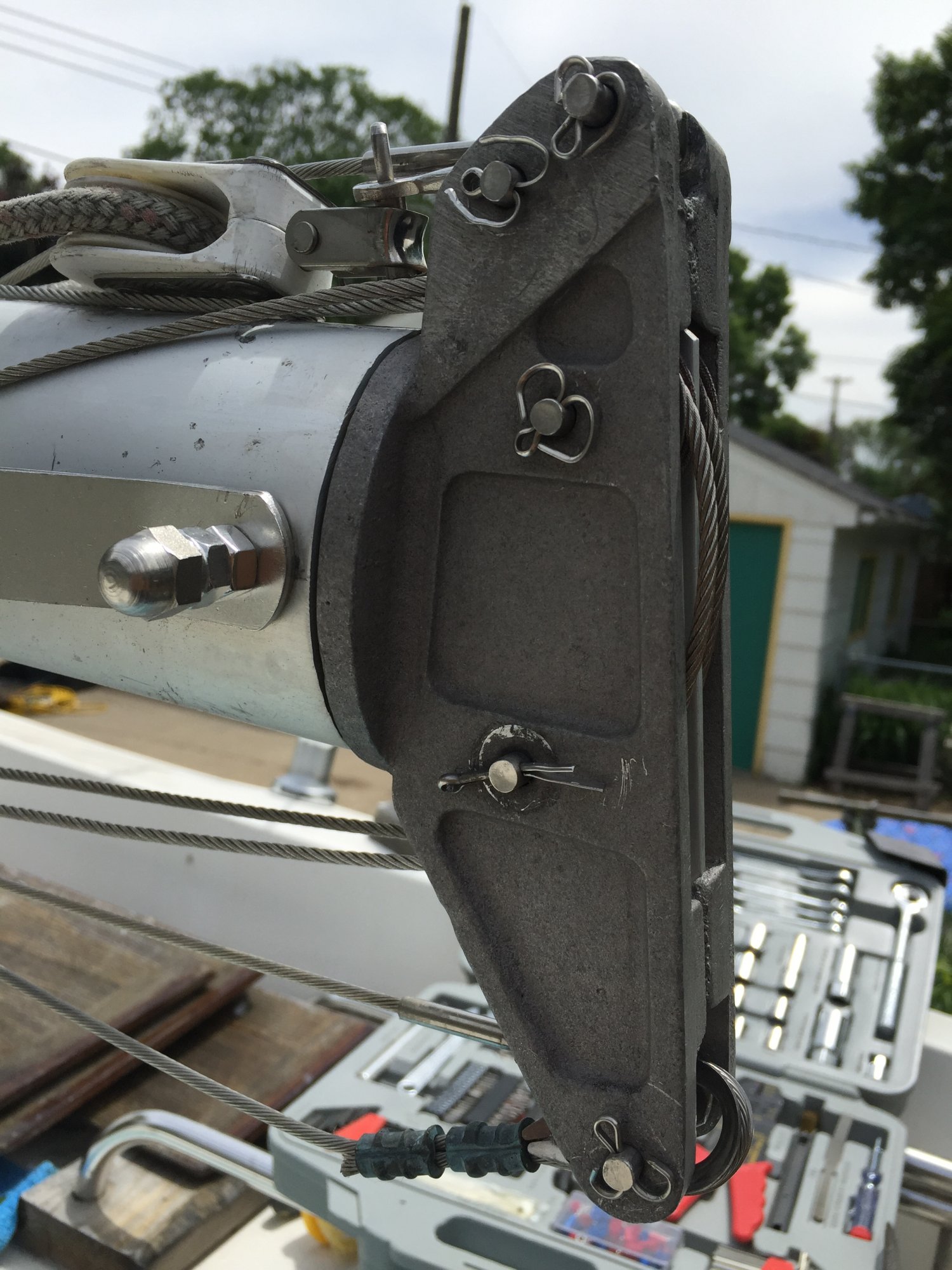 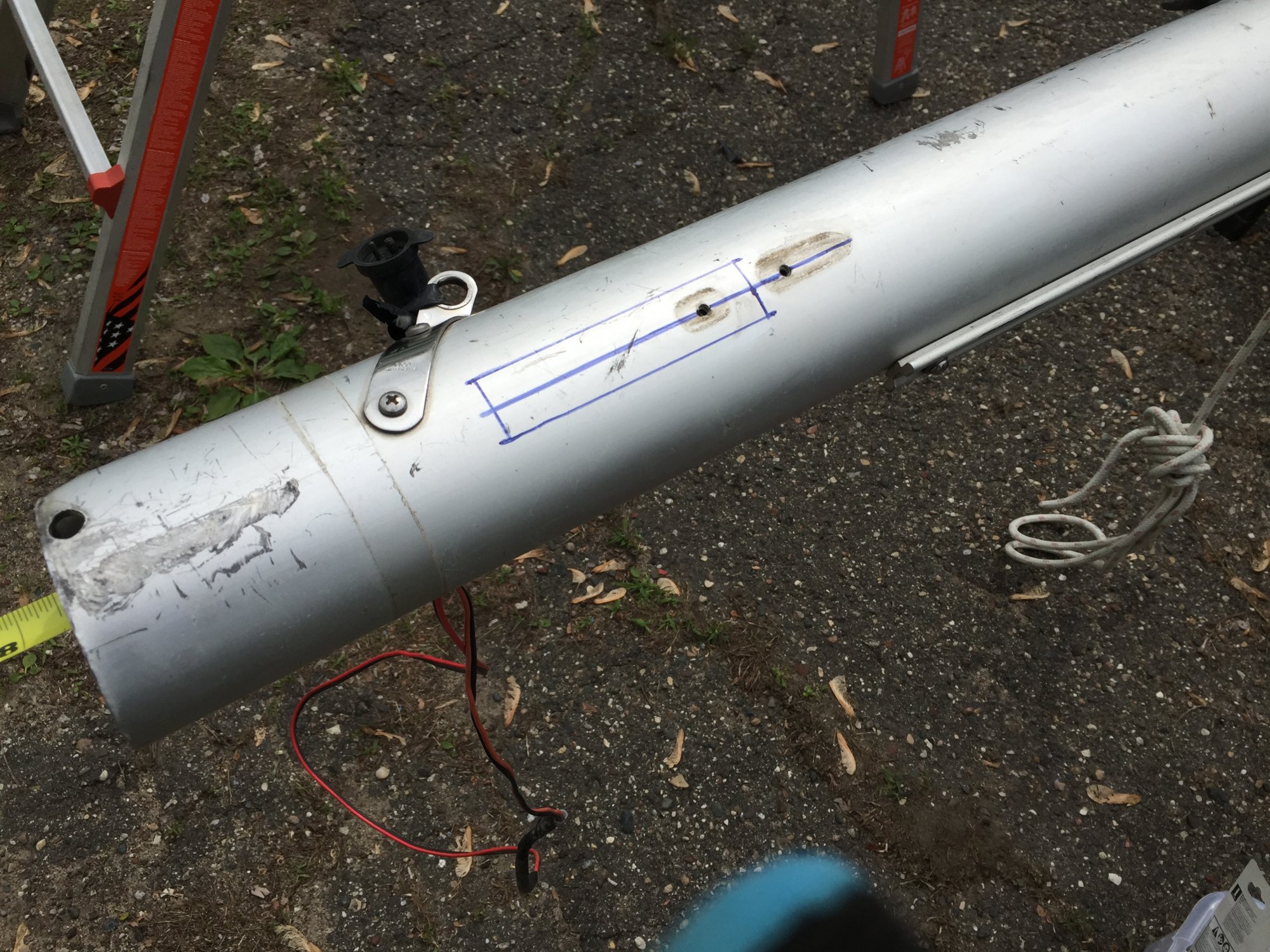 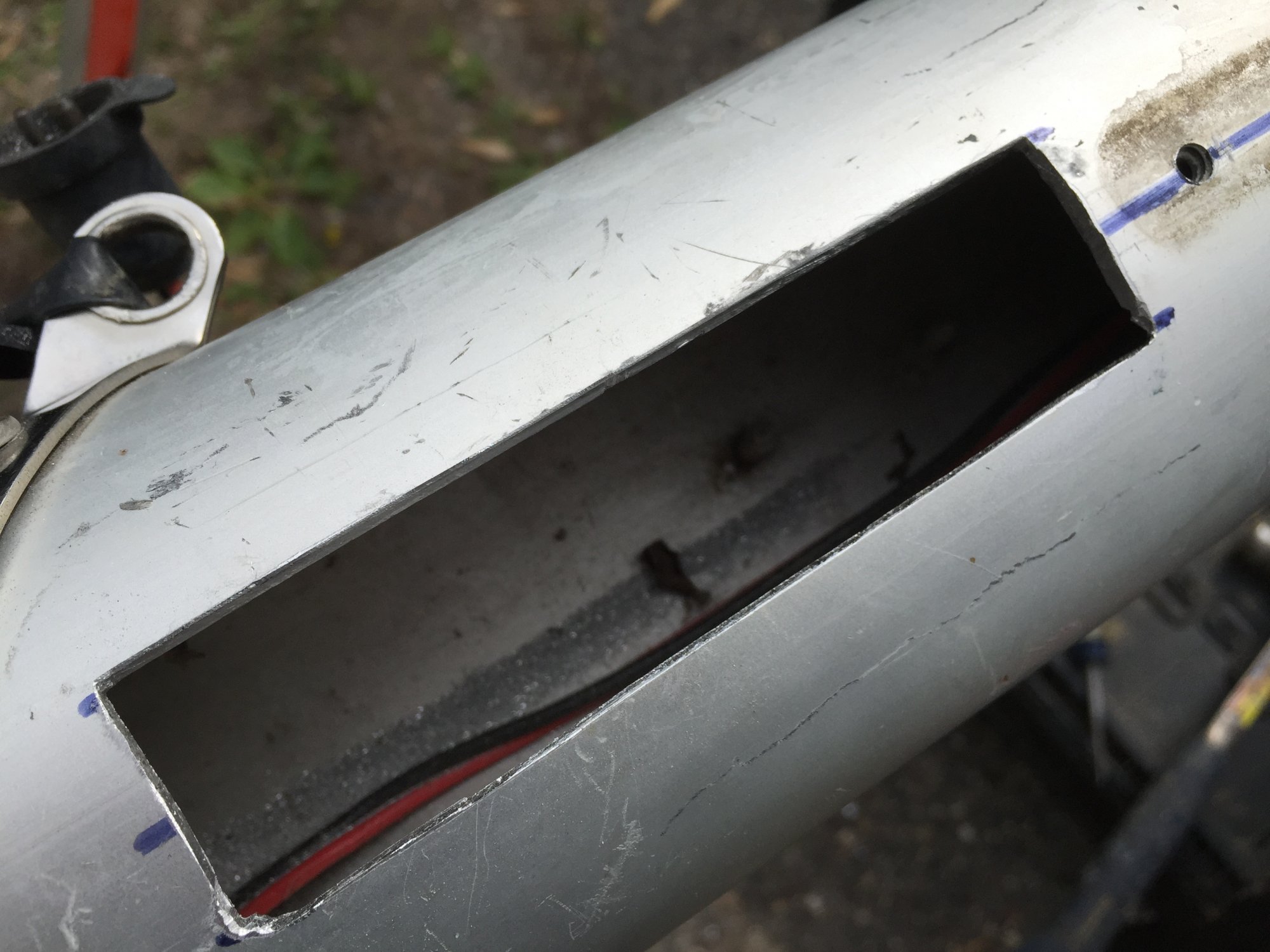 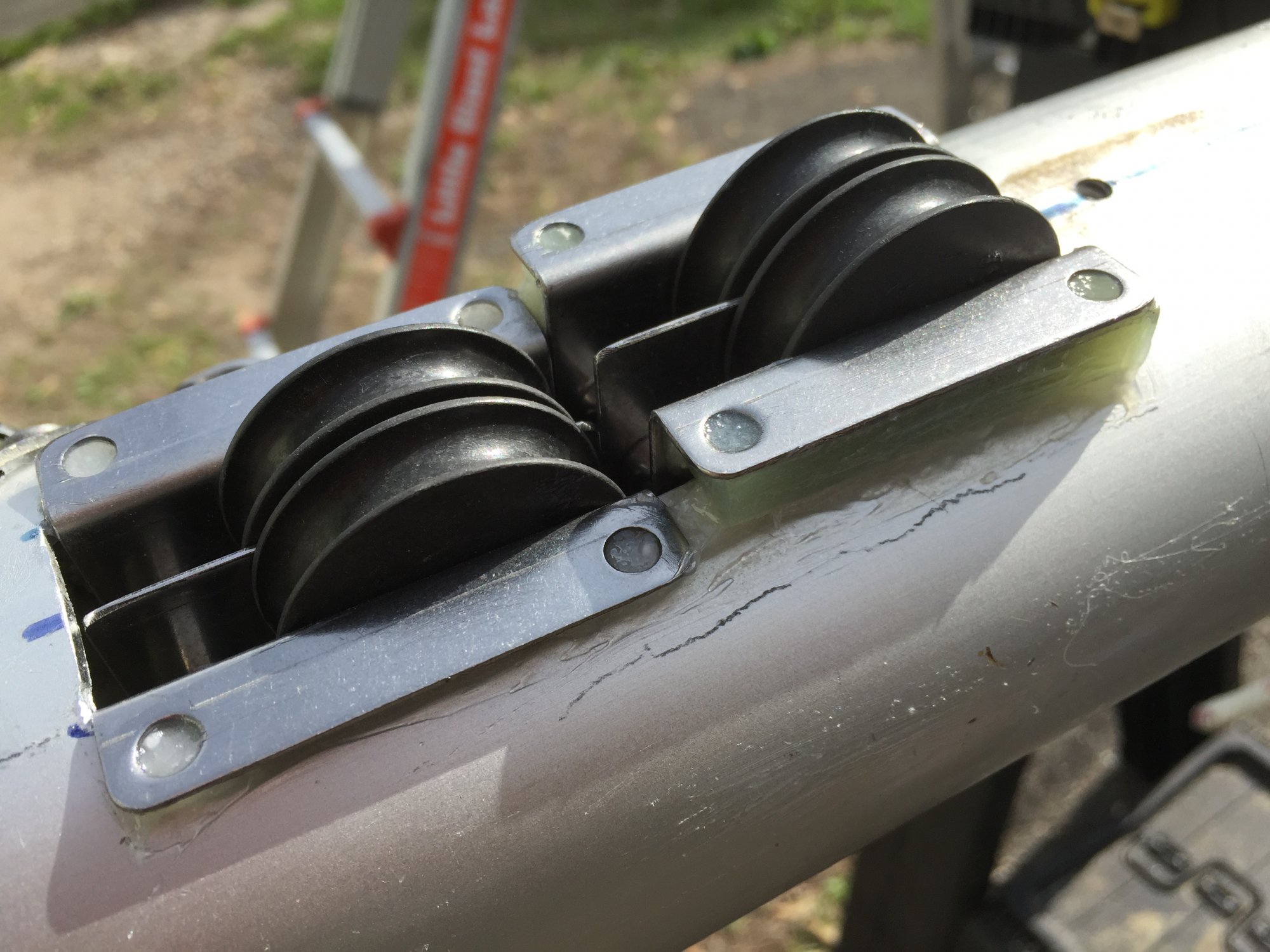 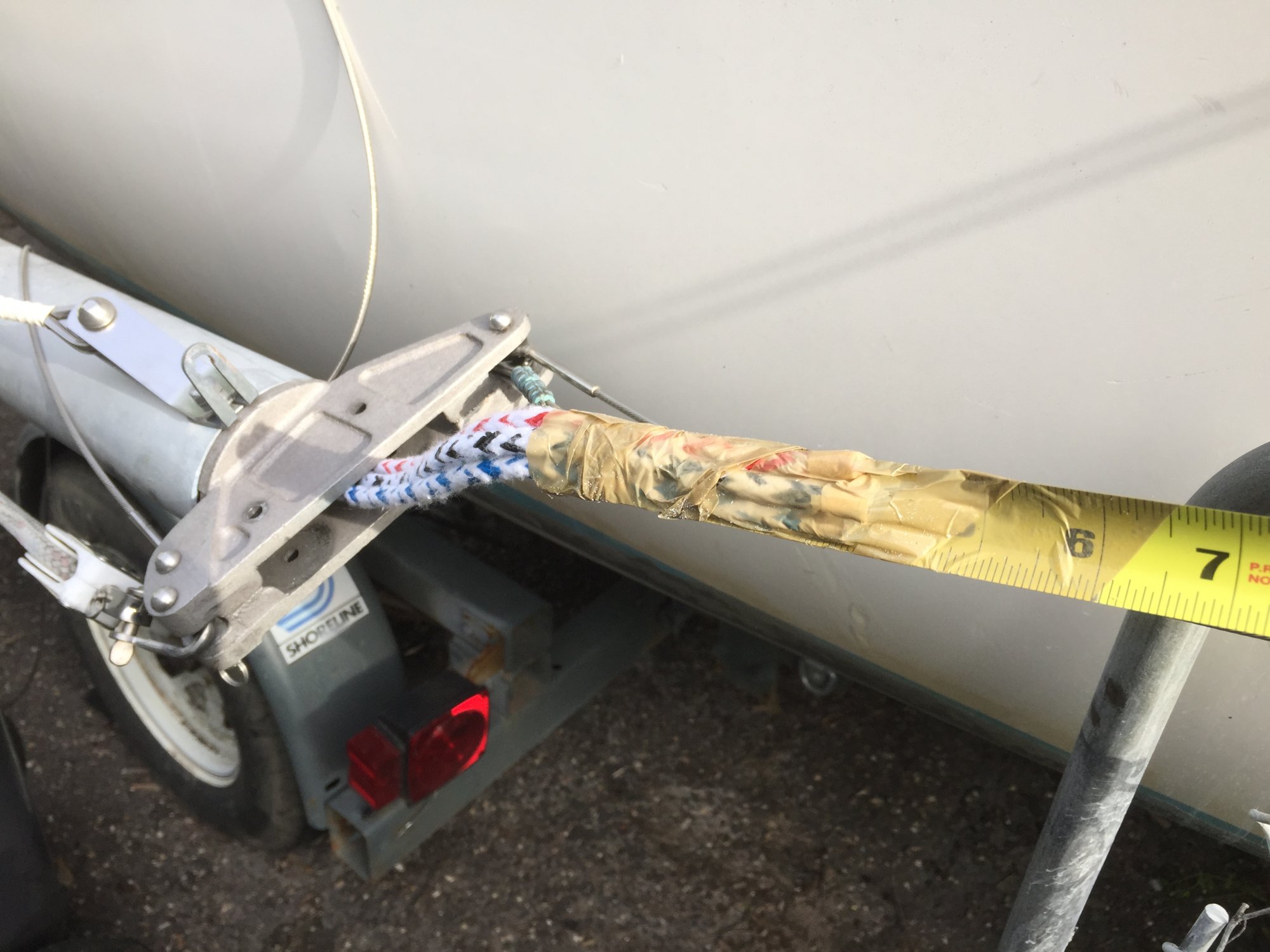 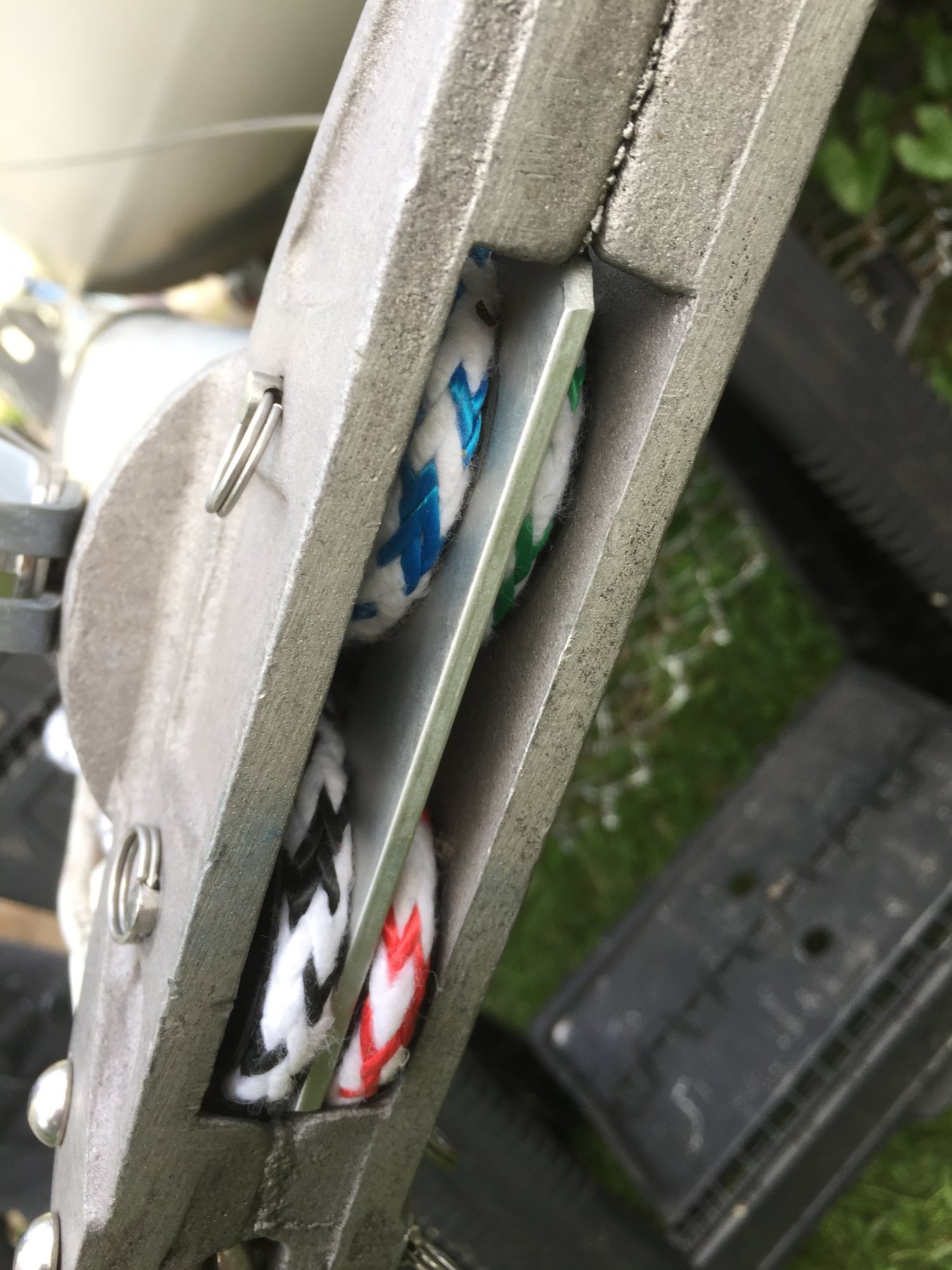 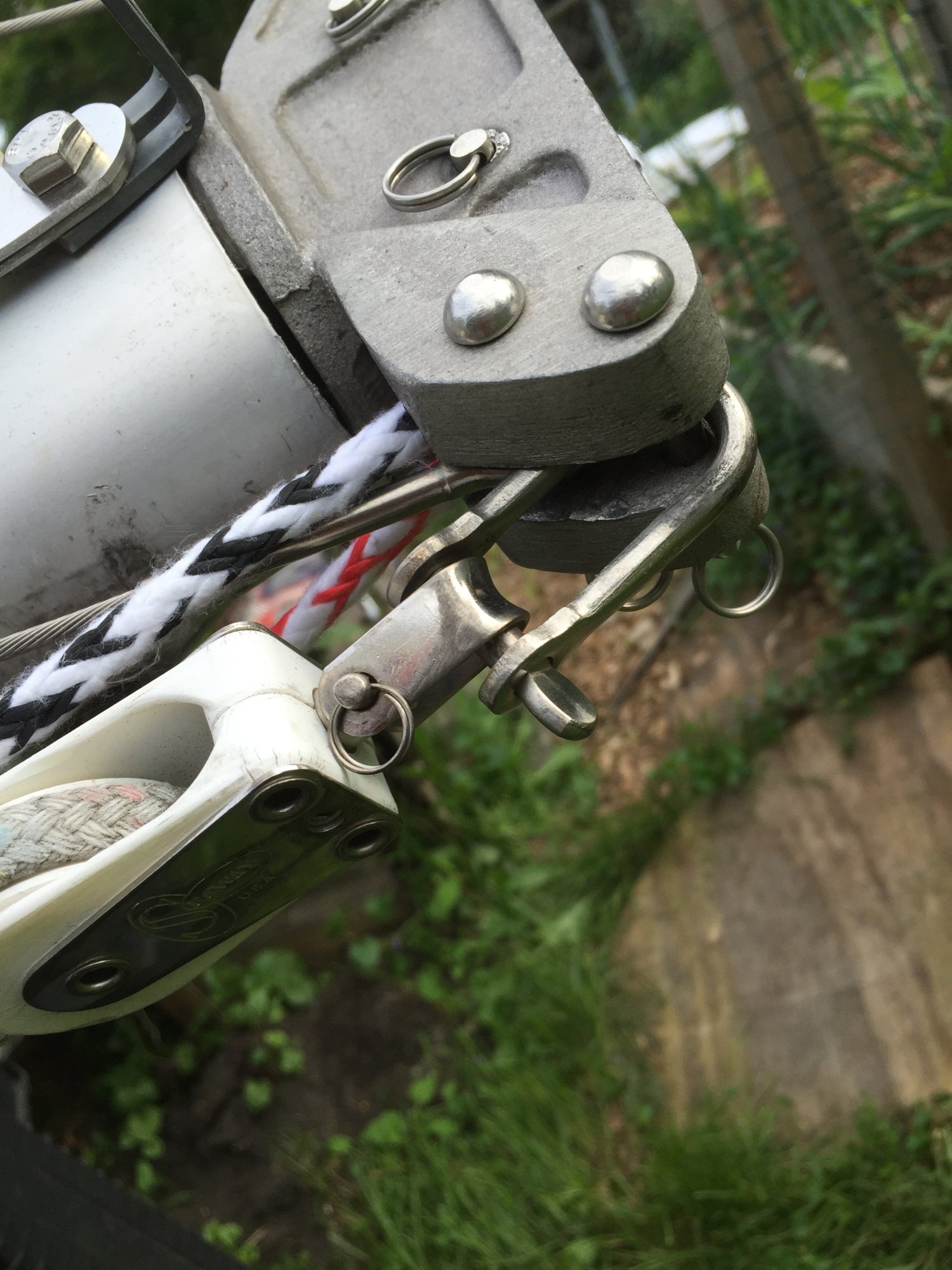 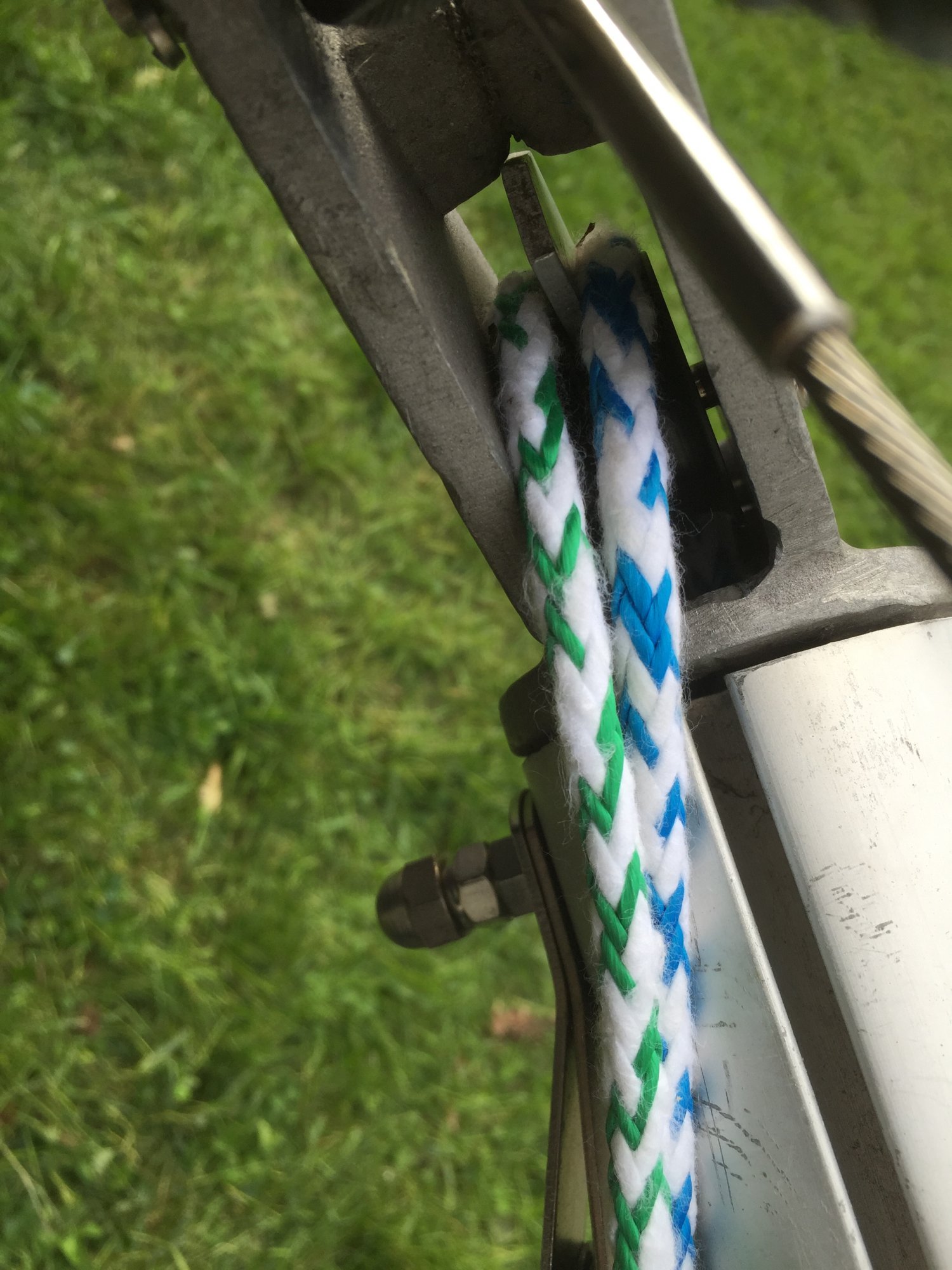 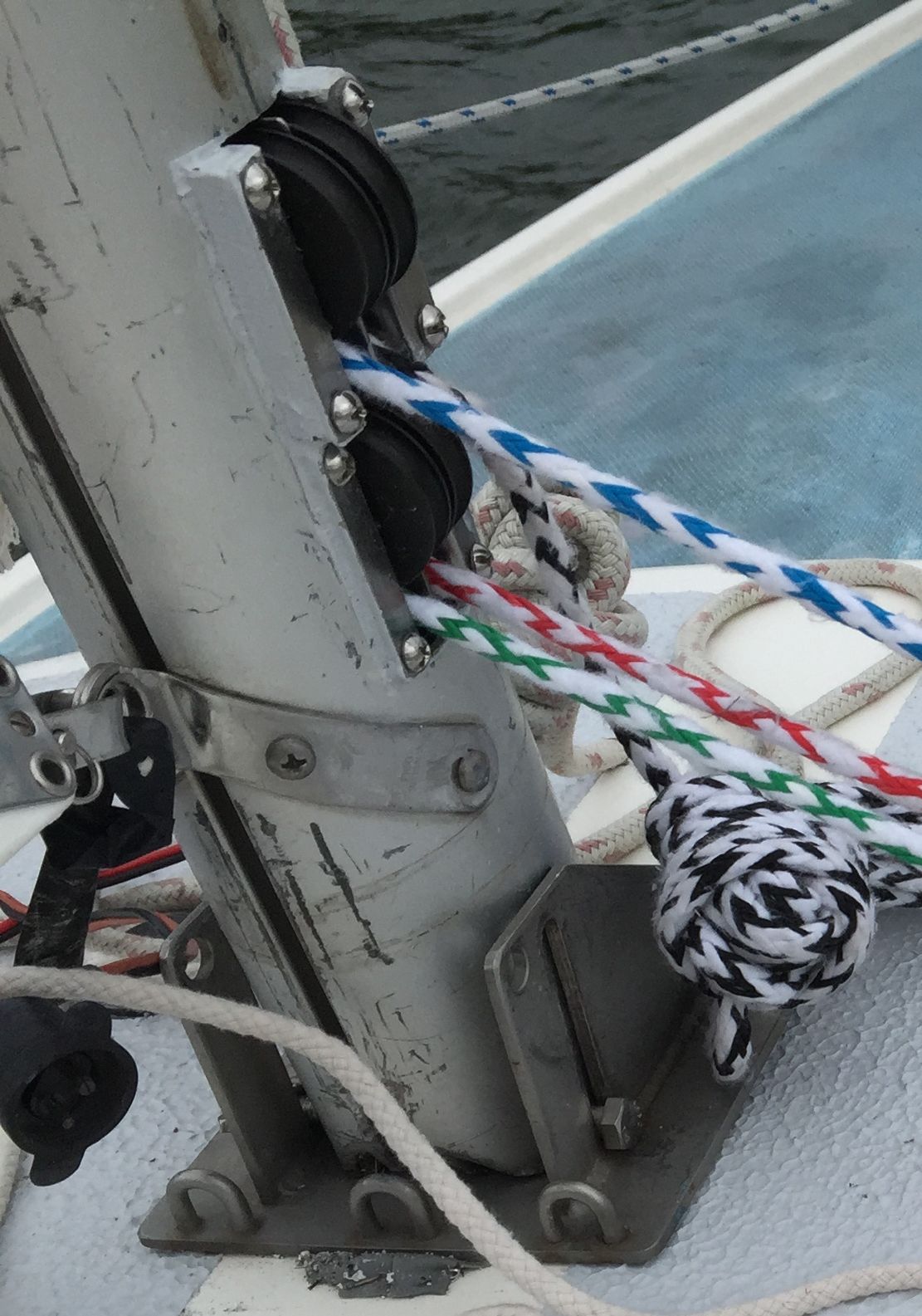 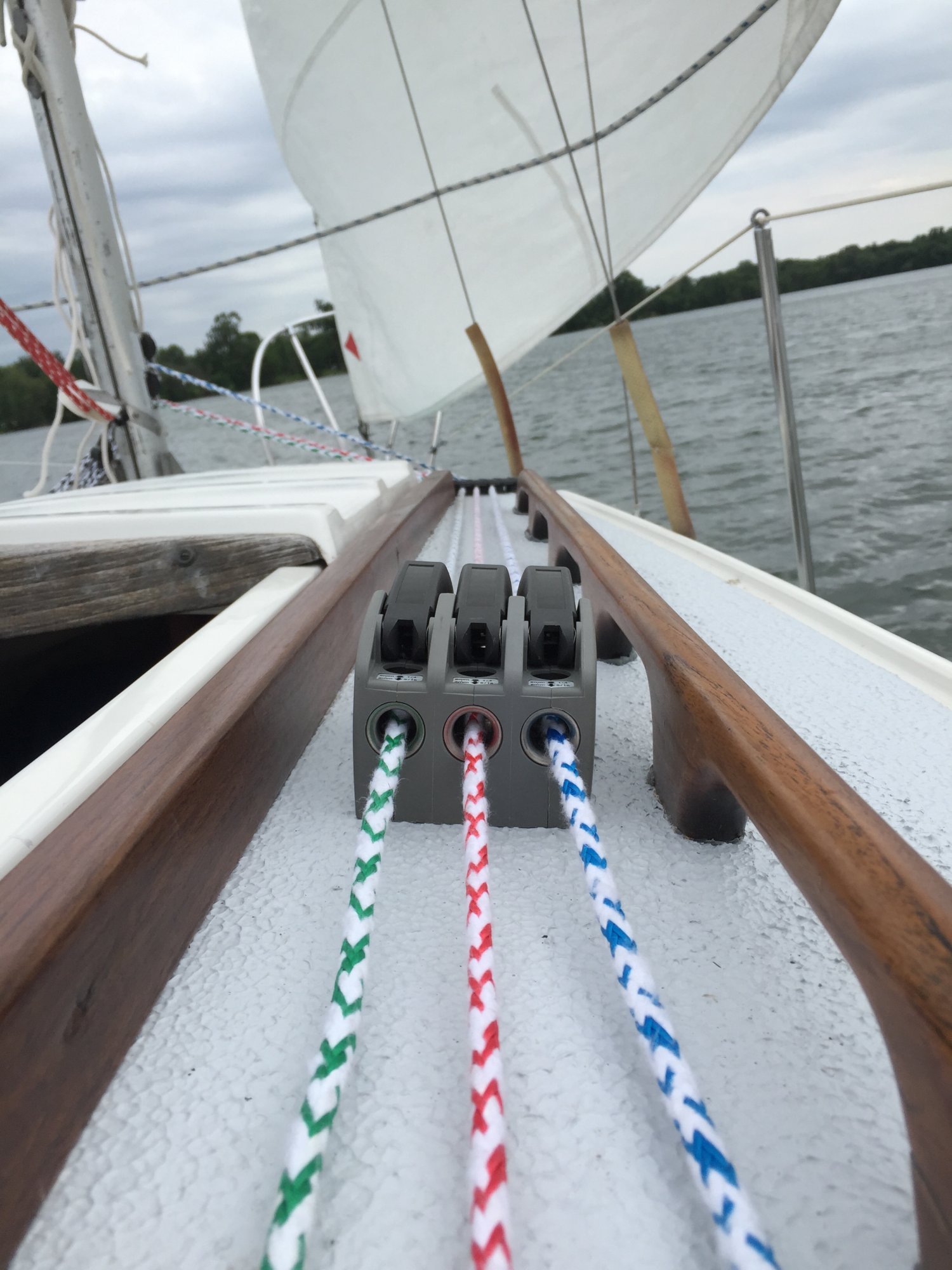 Catalina C22 Solomon's Island, MD
Sounds like a dream to handle. My topping lift is outside the mast, and I might try running that inside like you have. Do you have any kind of reefing set up? I've been thinking of a 2 line reefing system, but I don't have any direct experience with any sort of reefing from the cockpit.

Catalina 22 Minneapolis
I have the single-line reefing kit from Catalina Direct, run back to the cockpit. It's pretty slick, although a two-line system would probably put better tension on the outhaul.
Likes: Hardhead

Beneteau 361 Sandusky Harbor Marina
That looks awesome, Minne, and is on my project list for Old Yeller. Gonna print this off so I have a guide for when I tackle this project. Thanks so much!

Catalina 22 New Style SHSC, Lake Winnipeg
And here I thought they all had internal halyards. (Wire and rope or just rope)

Having 4 would be nice.

Leeward Rail said:
And here I thought they all had internal halyards. (Wire and rope or just rope)
Click to expand

Yamaha 33 Port Ludlow, WA
What line did you use?