Boat For The Grandkids

- - Lake Lanier, GA
My grandkids are at the age (10 - 14) where I’d like to introduce them to sailing. I’m located in the Atlanta GA area and find that there’s not a lot of boats to chose from. I learned to sail on a Laser and have a slight bias in that direction.
I’d ideally like to spend less than $2500 on a boat & trailer and buy something that should hold its value fairly well in case this pipe dream fizzles out.

Any thoughts and/or recommendations would be most appreciated.

Alden 50 Sarasota, Florida
Kind of depends on what kinds of boats are popular with kids sailing clubs locally. Here and around Milwaukee where our grandkids (same age as yours) sail, Opti’s are ubiquitous, easy and relatively safe.

Slickcraft 26 Greenport, NY
No argument there. But if you don't need the g-kids to be in the yacht club world, I would consider a Cape Dory Typhoon. Stable, forgiving, a better sailing boat than assumed, trailerable and modest in price.
Forget the Sunfish. It's not a real sailboat. The rest are centerboards which are good boats but a keel boat is a nice platform for teens. They can't get into much trouble with it unless they really try. They can even do overnights. Try that on a Snipe.

O'Day 19 Littleton, NH
Learn to handle a centerboard or a dagger board and a kid can begin to understand some of the sailboat specific physics better because there's the option of sailing without lateral resistance, adjustments in CLR position, changes in righting moment, the effects of added surface area and some of the complexities of sailing, in general. More thinking, more planing ahead, more organization of lines and equipment.
My Windmill is an awesome boat for that age, but without early oversight and mentorship, it isn't a good first boat. Try a yacht club fleet boat to see how they take to the different types.
The Atlanta Yacht Club may have some used boats for sale. They float Snipes, Lasers, Thistles, and Y-Flyer scows as well as Optis.
Here's the fee schedule for membership: "Initiation fees - Please include your check for the initiation fee with this signed application. Regular membership, $900; Intermediate membership, $270; Associate membership $180. No initiation fee is required for interim, reciprocal or student members. Former regular members may be readmitted one-time without an initiation fee."

O'Day Daysailor 17 Nevis MN
I'm also a little partial to Lasers myself, since that's where I started back around 1976. I really like being able to capsize, upright, and keep going without bailing. On windless days we would make a game of trying to capsize and right our boats without getting wet, other than the little water that was shed from the sail after it had been dunked. I, like many teens, got hooked by the speed and excitement of hiking over the side of the planing dinghies, I think if I had started with a keel boat I would have gotten bored with it and given up sailing.

I wouldn't go as far as saying the Sunfish isn't a real boat but I do have a real dislike for the lateen sail. They are terribly inefficient and I much prefer a boat that sails the same on both tacks. They are fine for beginners but I think you're grandchildren will grow out of it before you know it.

Unfortunately I don't have any experience with the other boats mentioned. Hopefully someone else can comment on them.

Beneteau 310 Cheney KS (Wichita)
Could add the Vanguard 15 (V15) to your list of possibilities. Might be a little more boat than you want (they can handle) at present but if they stick with it they will grow into it. Can be sailed with 2-4 kids or an adult and a couple kids.
K

- - Lake Lanier, GA
Thanks everyone for all the great feedback. I’ll keep my eye on Craigslist and be on the lookout for the boats mentioned.
Any other classified I should monitor for boats located within an hour or two of ATL?
I’ll also give AYC a call and see if they have a line on any boats. Unfortunately they’re about an hour and a half from where I sail.

Hunter 216 Kingston
Just a thought but have you considered a small catamaran. 10-14 age I think is typically after the cool fun factor (same drives that @BudGates and I had trying to flop your laser without getting wet. Stable “fast” platform especially with a group and with a bob on the top of the mast not that hard to get sailing again if you push it too hard. Hobie and others sell a non-fibreglass version that is practically indestructible. I think what your really after as a fellow GP is to get them hooked on being out on the water and NOT on their gaming console so whatever you choose aim sure if your able to join in the “fun” with them you will all benefit.
Likes: BudGates

Ken Krawford said:
Any other classified I should monitor for boats located within an hour or two of ATL.
Click to expand

If it's trailerable I think you can go wider than that. If you tie your search into the coast you'd cast a much wider net.

shemandr said:
Try that on a Snipe.
Click to expand

We went lake camping on a Snipe when I was a kid. We had a hell of a good time. It’s about the same as canoe or kayak camping,
Likes: BudGates

Ken Krawford said:
My grandkids are at the age (10 - 14) where I’d like to introduce them to sailing. I’m located in the Atlanta GA area and find that there’s not a lot of boats to chose from. I learned to sail on a Laser and have a slight bias in that direction.
I’d ideally like to spend less than $2500 on a boat & trailer and buy something that should hold its value fairly well in case this pipe dream fizzles out.

Any thoughts and/or recommendations would be most appreciated.
Click to expand

At their age, I’d pick a dinghy. That’s the best for learning to sail. Not a keel boat. And then I’d pick the boat(s) that promise to be the most fun for two kids and a grandpa!

They don’t weigh enough yet to sail a laser, unless you get a radial rig with a smaller sail. The Laser is a one man boat, they temped to cost more too, because they’re an active, one design racing class.

Sunfish are sure fun for a kid, but they would have to take turns. That’s strictly a one man boat. When I was 10 years old I love sailing the Sunfish, but one is not enough for two kids and a grandpa

The capris 15 sounds great for two kids or Two adults. A good price too if everything is in good working order.

Two Zumas for two brothers? How much fun is that?!?! That’s awesome! And you can go with them. I think I’d pick that, personally. My sons first boat was a Pico. Pretty similar. My daughters first boat was a funny little 13 footer that she could sail solo at age 12 and about 100 pounds, similar to a zuma. It was big enough to hold an adult and one kid, for teaching purposes. We sailed alongside in a different boat at first. After a couple of days they would head off on their own without us, We turned the kids loose on the lake with a radio to call for help,if they needed it.

I vote for the two zumas or the capris 15. Both would be awesome fun for all three of you.

Remember, you’re looking for a boat that is fun and that they’ll learn quickly on. If you trade up in a season or two because they want something different, no problem. I don’t mean to be spending your money frivolously, but if depreciates a couple of hundred bucks when you sell it in a year.. do you really care?!? If they learned to love sailing, it was money very well spent!
Last edited: Jul 19, 2019 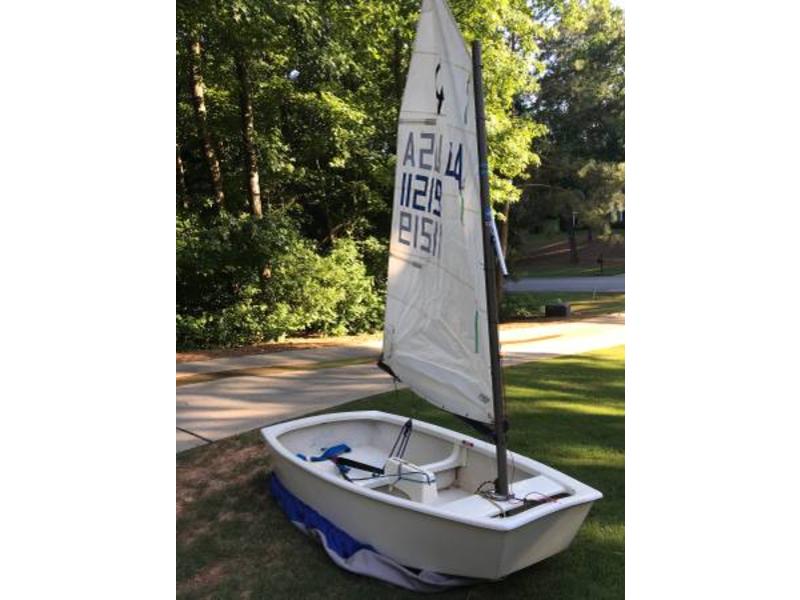 https://m.sailboatlistings.com/view/73587
Located in Flowery Branch. Listed at $1900.
This listing may be associated with the Lake Lanier Sailing Club. https://www.llsc.com/ You could put in a call to them.

- - Lake Lanier, GA
Thanks again everyone for your responses. There’s nothing worse than having many options!
I definitely agree with the “fun factor “ approach to help light a spark of interest. I’ll soldier on and see what happens.
Likes: Jim26m and DrJudyB

Hunter 216 Kingston
Perspective:
I spend $ on water “toys” for my family partly to try to instil my passion for this lifestyle but mostly to enjoy time with them.
I also spend (t) $ on post secondary education (probably orders of magnitude more than toys). One of my kids has a solid career in the Coast Guard, loves being on the water. Uses more of his “toy” skills than academic.

https://m.sailboatlistings.com/view/73587
Located in Flowery Branch. Listed at $1900.
This listing may be associated with the Lake Lanier Sailing Club. https://www.llsc.com/ You could put in a call to them.

Just watched the video. Wow! A little out of the original design spec I think. Usually you see a whole herd of these filled with “little” kids. I guess some of us never really grow up.
Likes: Jim26m and Will Gilmore

Catalina Capri 18 ann arbor
Nobody mentioned the Pico. I think it’s made by the Laser people (?). Roto-molded hull and a single roller reefing sail. Easy to sail for kids, and a blast for adults as well.

The junior sailing teacher at our local club prefers them over Optis because there is no fiberglass repair when the kids play bumper boats, and if the wind is high you can reduce sail “down to a handkerchief.”
Likes: DrJudyB and Jim26m 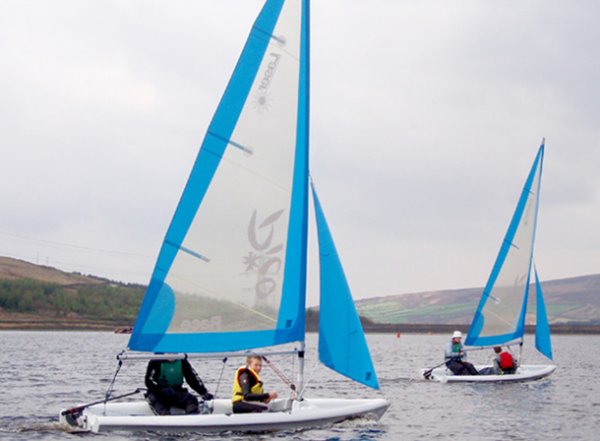 john6206 said:
...The junior sailing teacher at our local club prefers them over Optis because there is no fiberglass repair when the kids play bumper boats,...
Click to expand

I thought Roto- molded was a more difficult repair than fiberglass.

shemandr said:
I thought Roto- molded was a more difficult repair than fiberglass.
Click to expand

I think that's right. But the advantage of rotomolded is that it's supposed to be much more damage resistant in the first place. Our local youth camp uses Sail Cubes, which are essentially rotomolded optis. I'm looking to get something like this for my son who just took the camp. I'll probably lean toward an opti for the repairability, but I imagine that a camp with a lot of boats getting light/moderate bumps would see rotomolding as a way to cut their maintenance time.

john alden caravelle 42 sturgeon bay, wis
i have a 69' cal 20, totally restored, for my kids trainer and now grandkids. they are 11, 8, and 2. has worked out very well for us. yes, an adult is on board while they sail the boat at this age. they will grow into it for their own use. it's on a mooring 100' off the dock at the house. it's a hoot to watch them learn.
You must log in or register to reply here.
Share:
Facebook Twitter Email Link
Top Bottom