Catalina 30 mkII - 1987 Alamitos Bay Marina, LB, CA
Hey All,
Ran into a situation I wanted to ponder with your thoughts.
Several years ago, I rewired my boat like this with a battery combiner: (Combiner 100 Sheet) 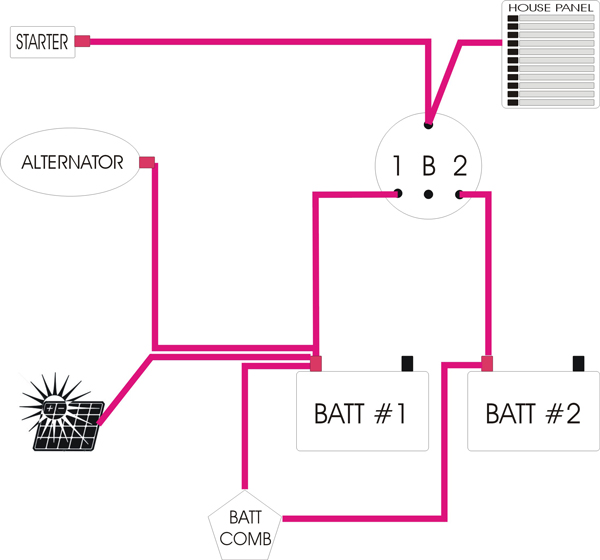 My batteries were starting to get a little tired recently, so I replaced #1 first since it was the most "worn" and I would replace #2 a few weeks or so later. In the meantime, I took a 6 day trip to the island, and on my way home, I found that #2 was super low. I realized later that I had connected the "memory" power for the car/marine stereo directly to #2, and if you know anything about how car radios work, that (yellow) memory wire is actually the main power connection, not the red one. So, I realized that this whole time I've been running down battery #2 with my stereo when I thought I was only using the house bank. It wouldn't normally be a big deal, because they should both charge back up with I run the engine or plug into shore power. That's where things got weird. When I returned to the slip, I just plugged in my shore power/charger. But I noticed that Batt #2 wasn't charging, the battery combiner was in "overload" and battery #2 measured less than 10V.
I understand that a battery measuring less than 10V is probably damaged or has bad cells, but i was surprised, as up to now that battery had always been able to start the engine when bank #1 was low. And, aside from the stereo that I just now realized was always connected to it, I never used battery #2 for any house duty. It was strictly supposed to be a reserve battery.

Sorry for the long story. My question is really about the combiners and battery maintenance. I didn't know #2 was low, and since the combiner was not letting it charge (overload condition), did batt #2 get messed up because I was constantly drawing it down and then combiner wasn't charging it?
Is this a problem with using the combiner or just a problem that the battery went bad?
Can I run into this situation accidentally if I have two "good" batteries? (I've since fixed the stereo memory wire)

jonelli said:
Is this a problem with using the combiner or just a problem that the battery went bad?
Can I run into this situation accidentally if I have two "good" batteries? (I've since fixed the stereo memory wire)

Am I asking the right questions?
Click to expand

Good design you have there, well done.
The combiner didn't work because the battery voltage with the charger on didn't get above its setpoint, which is 13.1V. Unless and until the voltage rises, the combiner doesn't close and combine.
Bad battery didn't let the V rise enough. Happened to me on Wednesday night.
With two good batteries, should be no issue.
Yes, right questions, good approach.
When in doubt, RTFM, the Yandina manual, also West Marine's old version, is excellent.
Here it is:

Good luck, should be easy with new batteries. I just replaced my house bank and have been using this combiner since 1998. Identical issue prompted me to replace my house bank. Got six great years out of it.

Beneteau 323 Annapolis MD
That is alot of cables on the battery post.

It's not a big issue at all. The wire connectors are flat and you can stack them plenty. Only the main wires from the batteries to the switch are 1/0 sized wires. I left the alternator wire with the original #4 size, and the battery combiner wires and connectors are even smaller.

@Stu Jackson - You're right in your assessment of course, and since pulling both old batteries out and playing with them on my home patio, I found that the "dead" #2 battery came back up to 11.8V just by sitting there on it's own. So, I'm assuming that if I didn't have the erroneously connected stereo memory wire connected to it, it would have probably come back enough to not overload the combiner and would have started charging again. But, it's still an old 5+ year old battery.
I'm going to put a new #2 battery in the boat this week, and keep one of these old ones around at home as a spare. I just wanted to figure out which one is less damaged, so I'm putting them both on a charger and then will take them to be tested later.

jonelli said:
I'm going to put a new #2 battery in the boat this week, and keep one of these old ones around at home as a spare.
Click to expand

1. What do you do about the core $ charge when you buy a new one? I always return the old ones to avoid that cost.

3. You could extend the life of your house bank by simply adding one battery to it. Like this:

IS IT BETTER TO HAVE ONE OR TWO BATTERY BANKS FOR HOUSE USE?
(By Nigel Calder - I DIDN’T write this!!!)

The popular arrangement of having two house banks alternated in use needs scrutiny before I go any further.

LIFE CYCLES: As we have seen, the life expectancy of a battery in cycling service is directly related to the depth to which it is discharged at each cycle - the greater the depth of discharge, the shorter the battery’s life.

Let’s say, for arguments sake, that a boat has two 200-ah battery banks, alternated from day to day, with a daily load of 80 Ah. Each bank will be discharged by 40% (80 Ah of one of the two 200 Ah banks) of its capacity before being recharged. The batteries will fail after 380 cycles, which is 760 days (since each is used every other day). If the two banks had been wired in parallel, to make a single 400 Ah battery bank, this bank would have been discharged by 20% of capacity every day, with a life expectancy of 800 days, a 5% increase in life expectancy using exactly the same batteries!

There are two immediate conclusions to be drawn from these figures:

1. For a given total battery capacity, wiring the (house) batteries into a single high capacity bank, rather than having them divided into two alternating banks, will result in a longer overall life expectancy for the batteries.

2. All other things being equal, any increase in the overall capacity of a battery bank will produce a disproportionate increase in its life expectancy (through reducing the depth of discharge at each cycle).

FOR BATTERY LONGEVITY, A SINGLE LARGE (HOUSE) BANK, THE LARGER THE BETTER, IS PREFERABLE TO DIVIDED (HOUSE) BANKS.

Stu Jackson said:
1. What do you do about the core $ charge when you buy a new one? I always return the old ones to avoid that cost.
Click to expand

Ah... Yes, but what you didn't know is that I already had an extra third battery I used for the first core exchange.

I have an electric trolling motor at home, and I live in a harbor condo, and I could throw my dink in whenever I want and mess around.
I also like taking a battery camping to use for silly stuff like outdoor projection, espresso machines, etc... And, for a Christmas parade float, they are great for powering lights and audio. So, hopefully, one of these batteries is semi-useful to keep around!


Stu Jackson said:
3. You could extend the life of your house bank by simply adding one battery to it.
Click to expand

Yah, I could, and I have thought about it. But, to go through the trouble of rewiring the boat to fit a third bank when I really have no issue with the one bank on long trips, and it lasts 5-6 years. I have so many other things on the boat that I am worried about fixing or upgrading, that adding a 3rd bank is pretty down on the list for now. Maybe some day.

Catalina 30 mkII - 1987 Alamitos Bay Marina, LB, CA
I think I discovered my original problem. I'll start over... This might help someone later.

So, my original dead battery problem was just from the combiner never allowing Batt#2 to charge, and it slowly got drained over time and I never realized it wasn't charging. I will add that to my list of things to check on regular basis or eventually install a battery level/voltage meter on both batteries someday.
You must log in or register to reply here.
Share:
Facebook Twitter Email Link
Top Bottom