Backstay "hole" in the Bimini

Macgregor 26S Hobie TI Ridgway Colorado
Im using my 1990 26S mostly in the winter when I really dont need the bimini but its nice to have the bimini for a couple trips during the summer. On the 26S, what seems to be the best location for the bimini interferes with the backstay. Right now I just "route" the backstay around the aft end of the bimini with a stainless steel "guard" on the bimini pole and that sort of works.. I can use the main sail with bimini up..

Ive been using the backstay more this season and now put a little more tension on it than I have in the past and am thinking about cutting a circular or square hole in the bimini so that the back stay is for the most part, not touching or being impeded by the bimini. I would sew some reinforcing material around the new hole.. Size of hole.. maybe 3 inches diameter or on each side.

Anyone done this and any regrets?

Hunter Cherubini 30 New Port Richey
Don't have your exact set-up but do have my split backstay going through my bimini. The holes, about 3-4 inches in diameter are reinforced and there is a zipper going from the holes to the edge of the bimini with a velcroed flap on the outside to protect it. This way, it can be taken off and put on without removing the backstays. Hope this helps.

Macgregor 26S Hobie TI Ridgway Colorado
I like the idea of the flap.. If I understand the zipper idea, I dont think I can do something like that because on my bimini, the support bar is in the way.. I think I will have just feed the backstay through the hole, then attach it to the bow.

This is the best picture I could find showing my bimini.. LOL. . SORRY!!! That was taken a bunch of years ago back in some cove off the Escalante river on Lake Powell.. 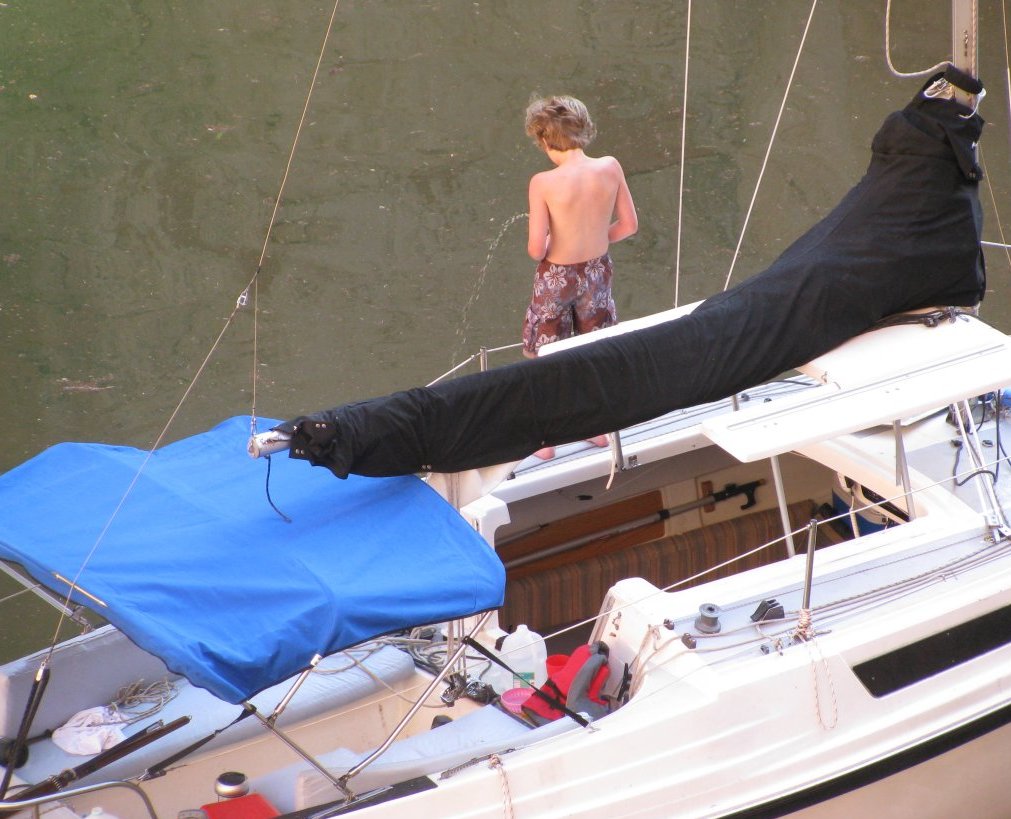 Hunter Cherubini 30 New Port Richey
Walt, I don't see a problem. My bimini looks exactly like yours. Where the bimini attaches to the frame there is a flap and zipper. Unzip and the bimini falls off the frame. From the hole that the backstay goes through there is also, like I said before, a flap and zipper to the the edge of the bimini. While you have the bimini off while these mods are being done, remove the backstay and reroute it between the two aft bimini supports. This will bring your bimini aft a bit. You may need to re-anchor the frame to the cowling but, it looks like it's on a track so relocating should be easy. Unless this is a DIY project, consulting a canvas man might be best. I'll try to find a picture of mine and post.

Hunter 34 Alameda CA
My bimini (bought right here at the SBO store) has little boots sewn into the holes. Works good to keep the rain from cascading down a hole onto our heads. Pretty clever design. If yours is far enough back it might not be an issue, but can't hurt. The cord allows the opening to be cinched down tight to the backstays. 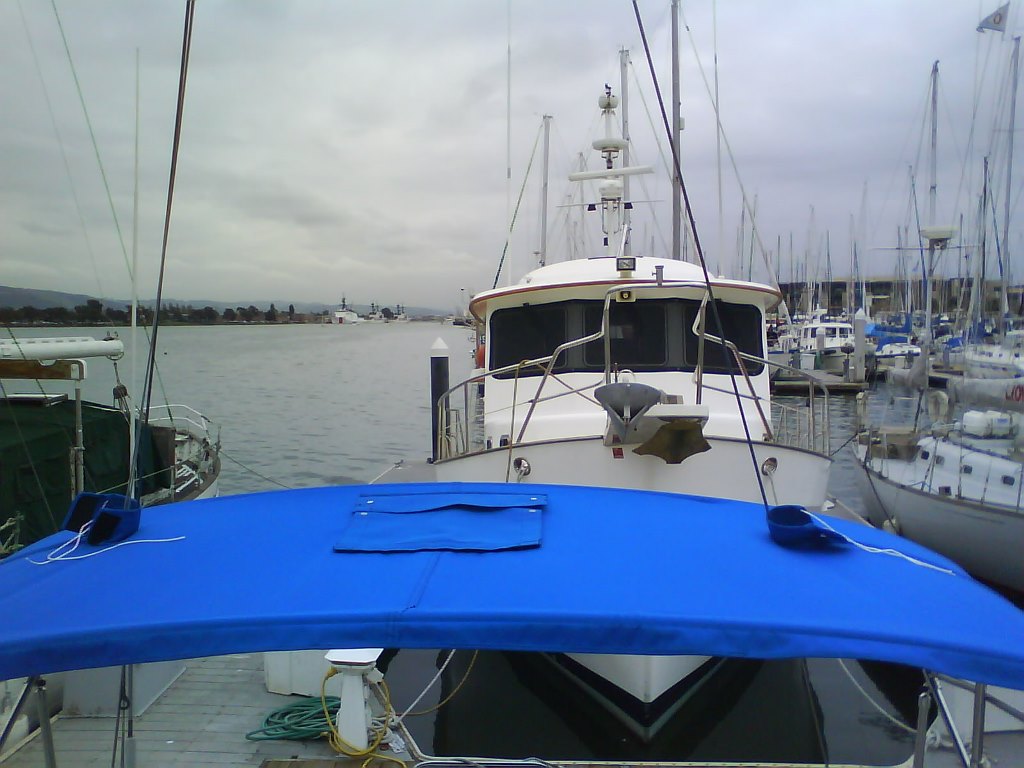 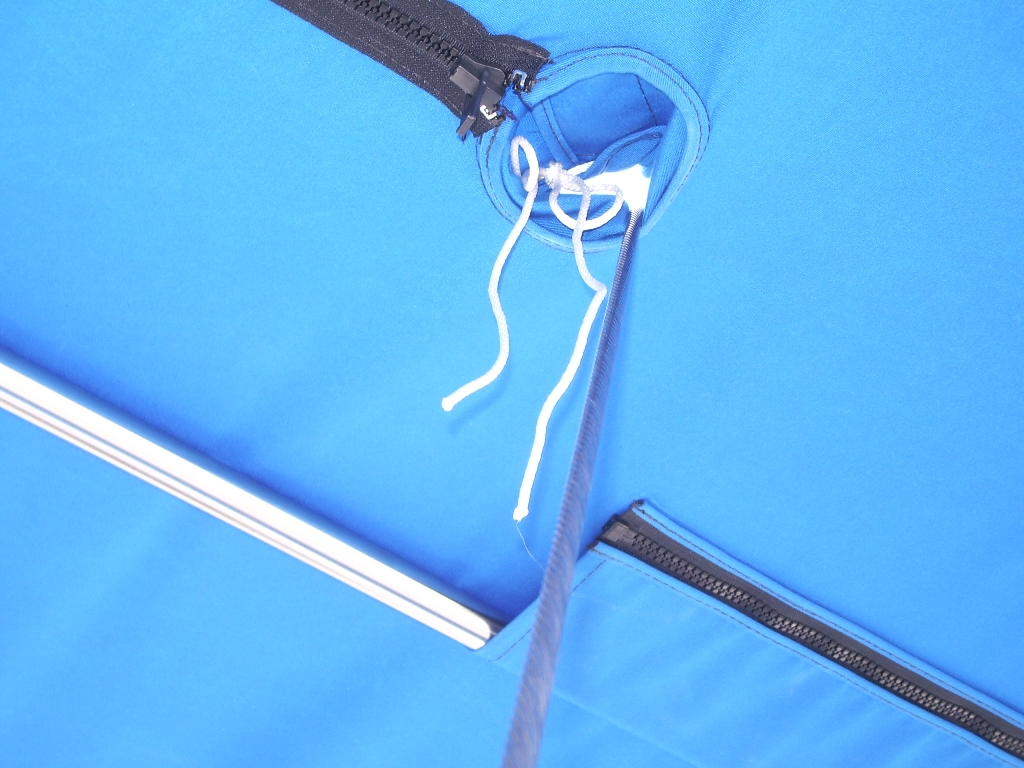 little boots sewn into the holes. Works good to keep the rain from cascading down a hole onto our heads.
Click to expand

Thanks for the ideas!!! Im not likely to change my backstay from the way it is now as it seems to work well for its main application.

Another thing Im thinking about.. this is a trailerable boat so that backstay gets connected and removed each time the boat is setup or taken down which will likely be around 10 times this year.

Beneteau 323 Annapolis MD
Allen, it looks like you holes are off a bit. I'd put a spreader bar between the backstays so they don't gouge into the side seams.
Likes: Allan12210

Hunter Cherubini 30 New Port Richey
Guess I don't need to get a pic. Mine looks exactly like Allen's.

Macgregor & Endeavour 26S and 37 Utah's Canyon Country
Wondering why you remove your backstay? I never do, but maybe there is some reason I should of been doing that? 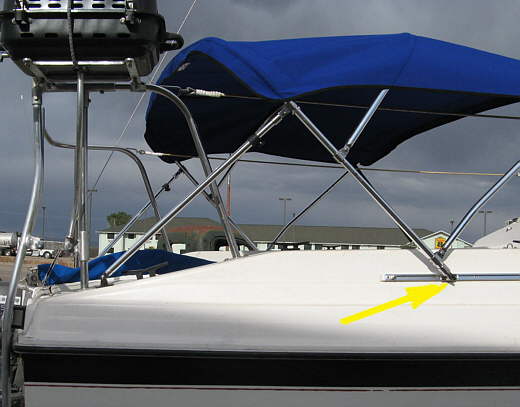 Can you just move the bimini forward a couple inches to avoid the contact. I no longer use a bimini because I have solar panels there now that serve the same purpose, but when I did, I had it mounted like above. Still had shade and no problem with the backstay hitting the bimini. I put the tracks on, but didn't really need to have them, as I always kept the bimini in the same spot. 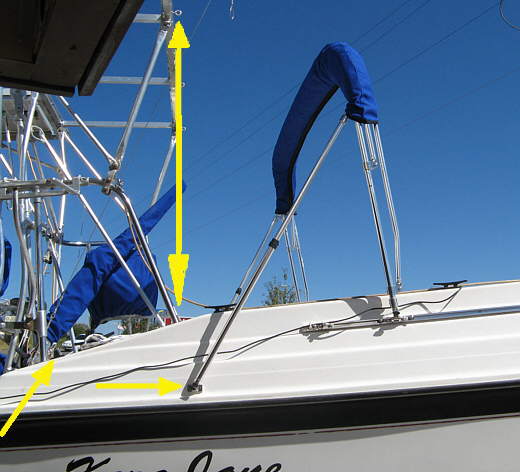 I did like the quick adjust support bar as I could keep the bimini forward if I wanted so I could pretty much walk past it and ... 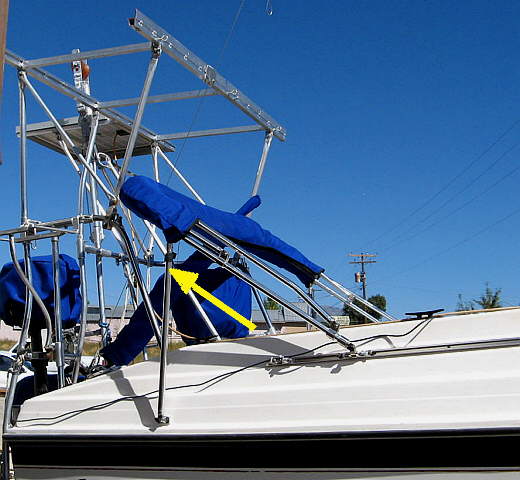 ... could also let it back if that was better. Bimini install starts here...

walt said:
this is a trailerable boat so that backstay gets connected and removed each time the boat is setup or taken down which will likely be around 10 times this year.
Click to expand

Macgregor 26S Hobie TI Ridgway Colorado
UV exposure when the boat sits in the side yard. When the mast is down, the boat often sits for long periods especially in the summer. I can easily remove the backstay line/ pulley assembly so that it doesnt sit out for months and months of UV. So.. when the mast comes down, I always just remove the bottom section and store it in the Laz. Its also very easy to set back up - quick connects.

walt said:
UV exposure when the boat sits in the side yard.
Click to expand

Your backstay isn't stock 7x19 SS, but aftermarket something or other?

Macgregor 26S Hobie TI Ridgway Colorado
Sumner, moving the bimini forward might be an option.. I will take a look at that. I dont remember exactly why its where its at now but I think there was some reason.. just cant remember what it was after about 9 years..

Cal 34-III, MacGregor 25 Salem, Oregon
EDIT.... after looking at the photos of Sumners reply, my solution really doesnt solve your problem UNLESS you take the backstay loose and take it inside the rear bar of the support frame.

it probably doesnt matter if you use the bimini full time or part time, but what I did to solve the backstay issue was to locate where the backstay was in relation to where the bimini would be, and then cut a slit from that point in the bimini to the edge.... then I sewed a piece of truck tarp material to the raw edge to make flaps that I could attach snaps to.... this way it sheds most of the water off the back/sides, rather than running thru on top of me....

I thought about using sunbrella to make the flaps out of, but there is movement in the bimini vs the backstay, and the truck tarp material has much better wear/chafe resistance, so it should hold up much better over time.

I do need to remove the cleat from the backstay now, as I used that for clipping my topping lift to when it wasnt attached to the end of the boom while sailing. 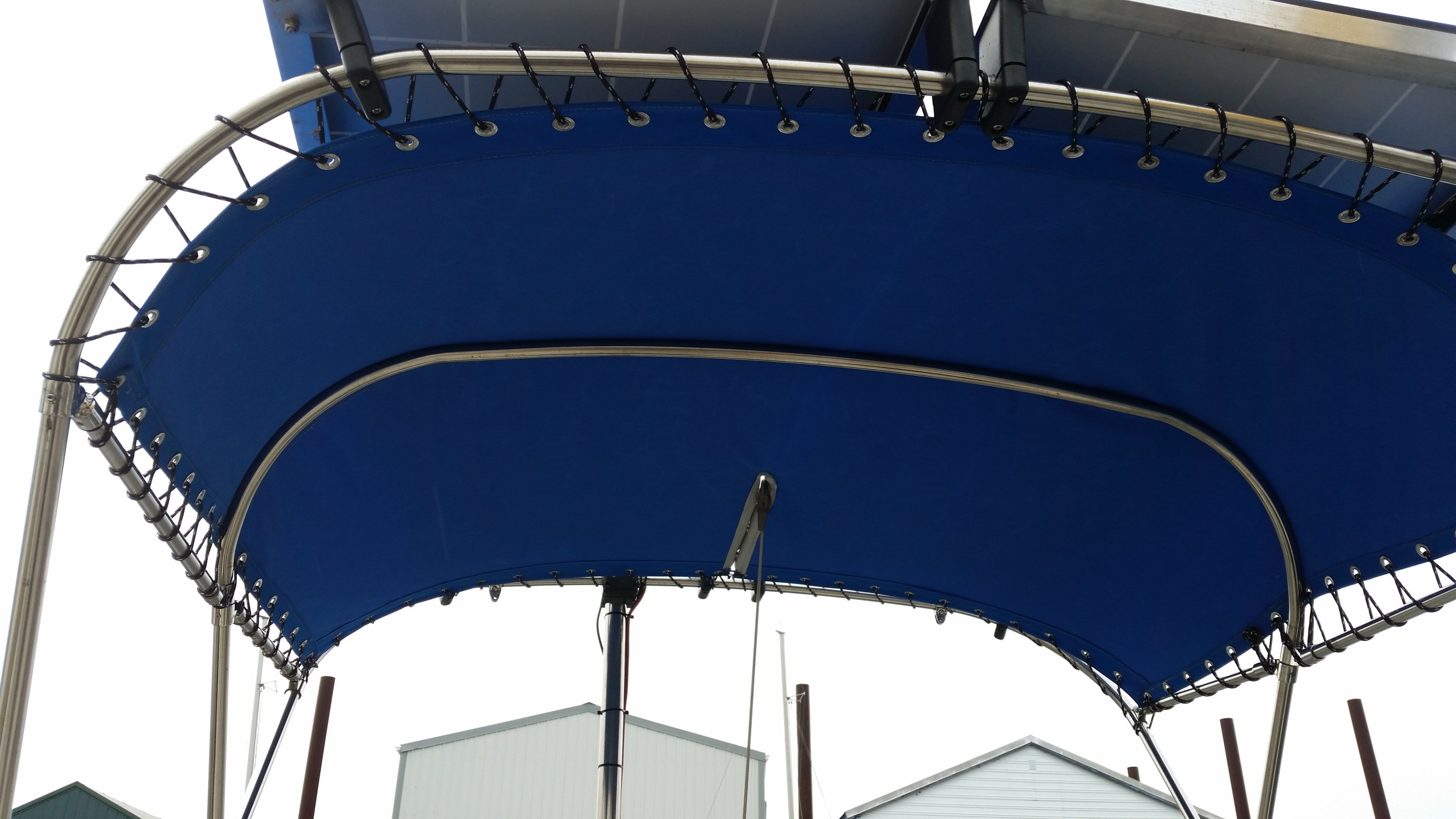 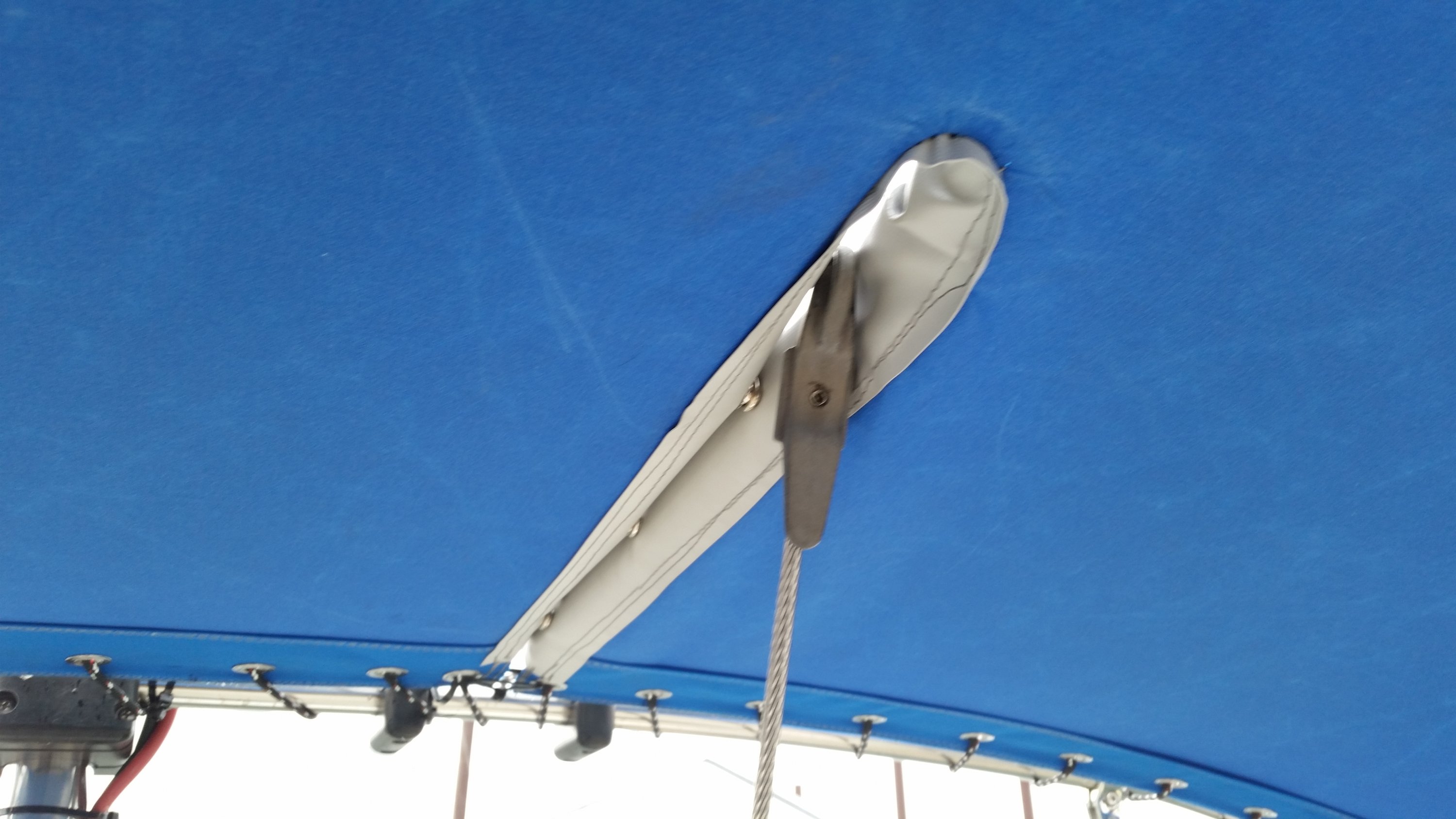 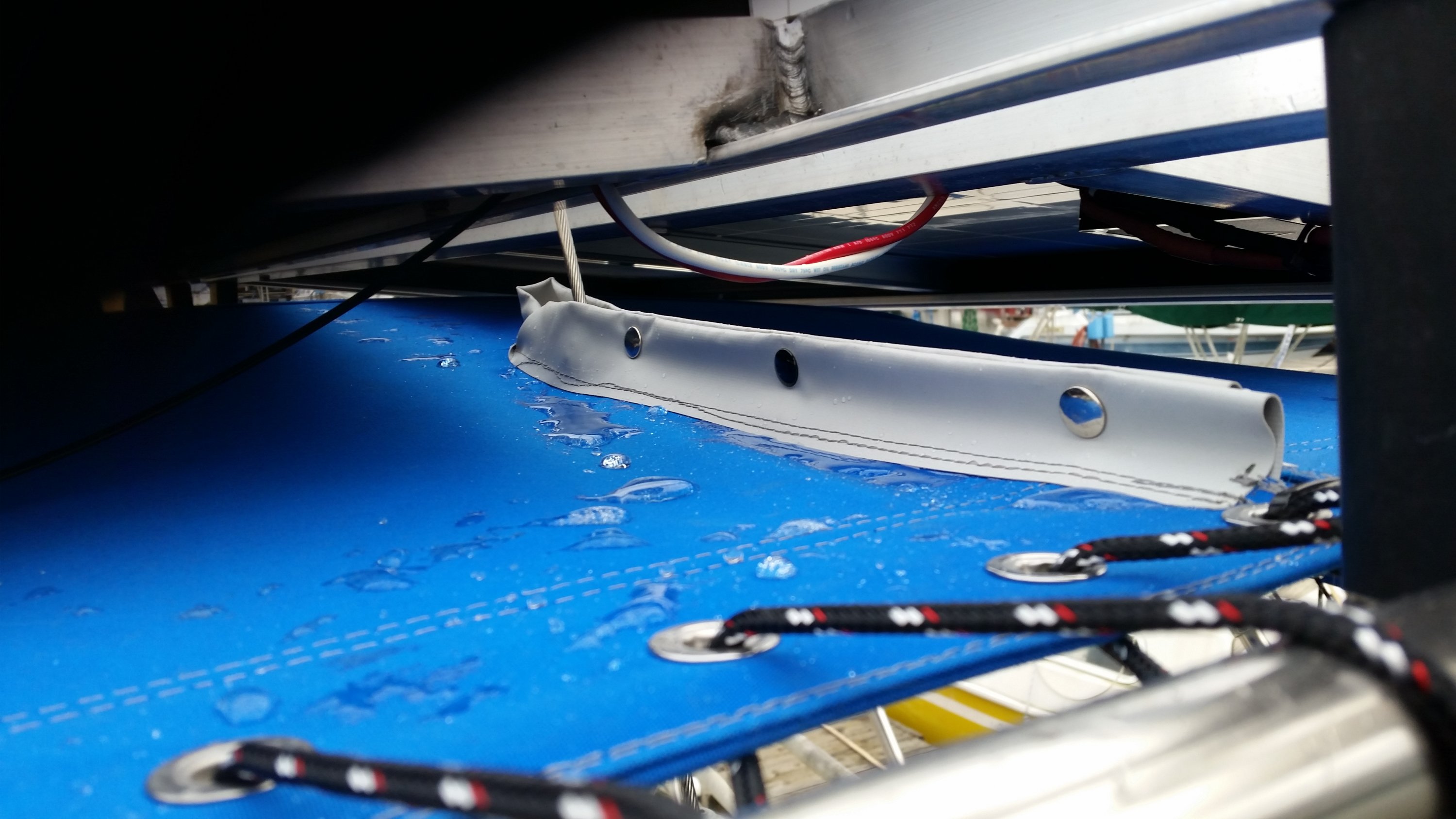 Your backstay isn't stock 1x19 SS, but aftermarket something or other?
Click to expand

Im not sure about the 25 but the 26S is a fractional rig where the backstay is useful for main sail trim. On mine, that lower section has some purchase like 8:1 using pulleys, cleat and line Its the pulleys and line that I dont leave out in the sun when the boat is sitting on the trailer for long periods of time (which is usually the case after I drop the mast).

I guess that could have been put on by a PO but I am finding the adjustable backstay very useful.
Last edited: Jan 21, 2017

Macgregor 26S Hobie TI Ridgway Colorado
Centerline, that slot is another great idea for the rain issue.. Truck tarp material.. I will look into that.

walt said:
Im not sure about the 25 but the 26S is a fractional rig where the backstay is useful for main sail trim. On mine, that lower section has some purchase like 8:1 using pulleys, cleat and rope Its the pulleys and rope that I dont leave out in the sun.

I guess that could have been put on by a PO but I am finding the adjustable backstay very useful.
Click to expand

the 25's are the same... the purchase tackle is not a stock item on either boat, as the backstay wire was long enough to reach the chainplate.

walt said:
Centerline, that slot is another great idea for the rain issue.. Truck tarp material.. I will look into that.
Click to expand

its about the quickest and easiest "sew job" to get where you want to go.

I go to the local tarp and canvas shop and load up on "free" scrap pieces... as amazing as it may seem to us why they would throw so much good stuff out (some rather large pieces) the volume in which they go thru it, they accumulate more scrap pieces very quickly.....

after looking at the photos of Sumners reply, my solution really doesnt solve your problem UNLESS you take the backstay loose and take it inside the rear bar of the support frame.
Click to expand

I am going to take a look at moving the bimini forward a little bit. Looking at my picture I posted earlier, I likely would not need to move the bimini much, maybe just several inches. That picture has the boom held up by a pig tail off the backstay and I could tolerate the backstay hitting the bimini in that case. Its just while sailing and where it may see a fair amount of tension that I dont want any interference from the bimini. Just have to get to the boat to see.

Macgregor & Endeavour 26S and 37 Utah's Canyon Country
Walt, taking the backstay and gear off makes sense in your case with the gear you are using vs. the absence of gear that I'm not using . 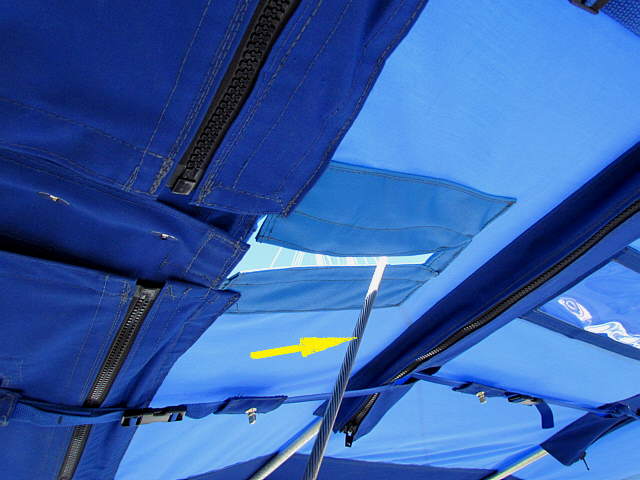 ... from Sailrite for the slot area. 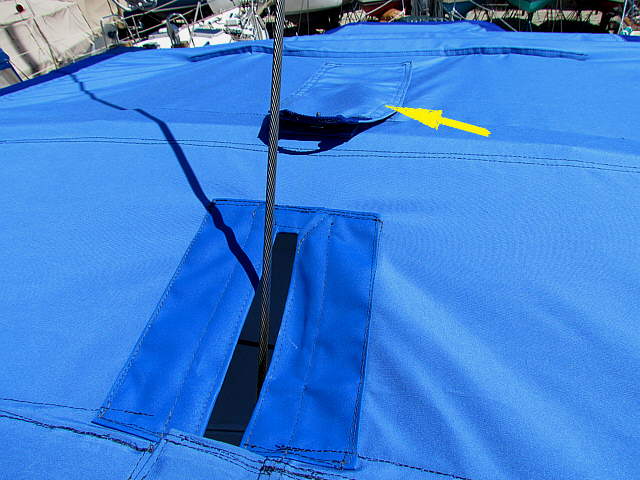 You can't really see it in the picture but behind the slot, that has the Top Gun surrounding it, is a flap that is secured with 'common sense fasteners' . I cut the back horizontal frame member on the bimini frame and have a tube that spans the cut on the inside. When we get to the boat we put the bimini up, open the flap and split the frame and move all of that behind the backstay. Then slide the frame back together and close the rear flap behind the slit. 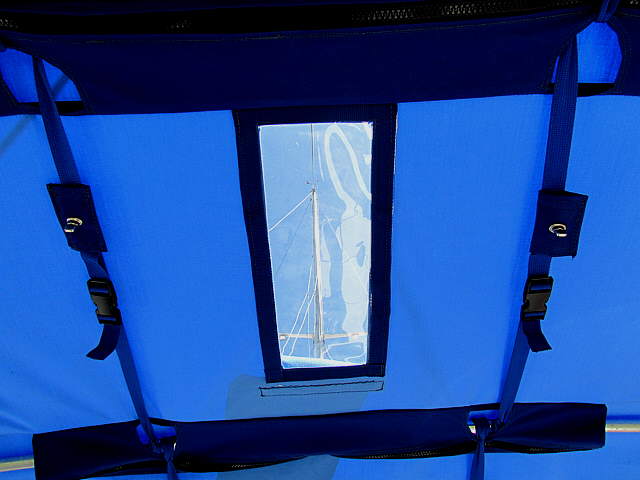 ... so that one can see the windex on the mast while sailing (if we ever get to sailing ). The window has a flap also that covers it when you don't need to see through it, so as to protect it from the sun.