Any Flying Scot Sailors Out There?

Slickcraft 26 Greenport, NY
Since being vaccinated I've joined the USSMartin County sailing center. So it looks like for a while I'll be sailing FS's. The local sailing coach told me the boat was fun up to about 16 kts. I will mostly be sailing solo. For the past 5 days we've had wind in excess of that. On my first and last sail I noted there are reef points in the main. There are no reefing lines rigged in the boom. The coach called the sail ties "Reefing ties" so I'm wondering if that is the way to tie in a reef. One would have to pull the clew aft.
Also, he said he always sails with both sails. Well he's young a agile and I'm less so. So I would like to know if anyone has sailed a FS with just the main. Or even a reefed main. If so, how did it handle?
Since our afternoon breeze often exceeds 16 knots being limited by that number is going to crimp the days that I can sail. And I have no interest in righting the boat from the water.
B

- -- -Bayfield
Learned how to sail on a Flying Scot. Hull # 818 - that will tell you how long I've been sailing. Great boats. Used to race them too. Have fun

Belliure 41 Snug Harbor, Lake Champlain
I used to race on a Flying Scott... Long time ago... I don't recall if one would prefer to sail with just the main up in high winds.

In higher winds the FS will plane. The vang is also real important and because of the geometry it needs to be released before tacking and gybing.

Slickcraft 26 Greenport, NY
Thanks, I didn't know that about the vang. I noticed on the first sail that the boom was bending - it's pretty lightly constructed - and wondered why since I had little to no vang on.
I'll check out the FSSA site. Tomorrow's sail should be in 11 kts. or so.
D

shemandr said:
Thanks, I didn't know that about the vang. I noticed on the first sail that the boom was bending - it's pretty lightly constructed - and wondered why since I had little to no vang on.
I'll check out the FSSA site. Tomorrow's sail should be in 11 kts. or so.
Click to expand

If you go to builder's website (yes they are still building new Scots), you will see a listing for a replacement boom. There's a reason and the vang is the cause. 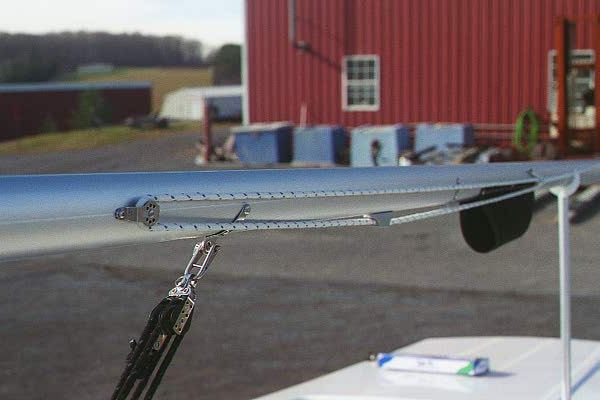 Get all of your parts for your FS sailboat here, including this new standard flying scot sailboat boom.

Slickcraft 26 Greenport, NY
Well, I'll pay more attention for tomorrow's sail. The last one I was mostly concerned with the mechanics of sailing the boat and leaving and approaching the dock.

Slickcraft 26 Greenport, NY
I was out about 2 hours today. Feeling more confident and I'm looking more at details. For most of the sail I didn't pay much attention to the vang. It's kinda far away from where I helm and again I am solo. So later in the sail I started to play with it. Yeah, it really closes the leech of the main. And bends the boom. Quite a bit. I'm not sure how far I can push that. The boom bends with the vang loose, too. The mainsheet causes a bit of bend too. In order to have the mainsheet forward at the helming position it has to run forward along the boom and hence down to the mainsheet rotating block/cam cleat. That's like mid-boom sheeting.
I stopped the boat by just releasing the sheets. I'd tie the helm off but the line for that doesn't stay in the jammer. Stopping allowed me to go forward and crank up some more halyard. Also, take a sip of water.
All in all a very nice sail. The landing at the end was way ugly because once I landing I tied the boat to a RIB that was blocking the dock. But after I took the sails down I saw that I was drifting away from the dock because my knot failed. After that was about a half hour of avoiding the beach, the launch ramps, and a marina while I tried to re-hoist the sail. The jib was pretty easy. The main wasn't. I was on the wrong side of the mast to get any muscle into it and I only got it about 2/3 the way up. But I was dealing with it and making progress up wind and out into open water where I could tack and finish the hoist and re-approach the dock. About then the dock kid came by in a RIB and offered a tow. I would like to have seen if I could work it out but I had already provided enough entertainment to the club deck, so I accepted. I think what I've learned from the 2 outings is that you approach the dock on port making a circle below where you want to land. Keep speed up (This is where I went wrong) and just release the sheets. The FS's don't glide like I'm used to. Then go forward with the bow line and tie the boat up and not worry about the friggin' flogging sails. I was missing my Yammie - I'll have to admit.
For those who don't know, I don't own this boat. It is available for use as part of my membership. The rigging and maintenance are sketchy. But I will find a line that will work in that tiller tie off before my next sail.
R

- -First 310 -
The reef points must be something added by the club, because the FS doesn't normally have them. Most of the power is coming from the main with both the head sail and spinnaker being pretty small. I don't think sailing with only the main will make much difference if you getting overpowered.

Moving your weight forward will help flatten the boat.

Slickcraft 26 Greenport, NY
Yeah reefing is off the table. There is no reefing hook and no cringle.

Slickcraft 26 Greenport, NY
Oh and thanks for the tip about moving forward for weight distribution.

john alden caravelle 42 sturgeon bay, wis
you really can't come up with a crew? those are detuned highlanders. you can't tip them over. snag a stranger off the club deck. snag two. sail that boat as flat as you can. that's not a Finn, get some crew, they love a breeze. they got short masts, they are always reefed. they need to be pushed hard to get much out of them.

that's the fleet at the school i once headed 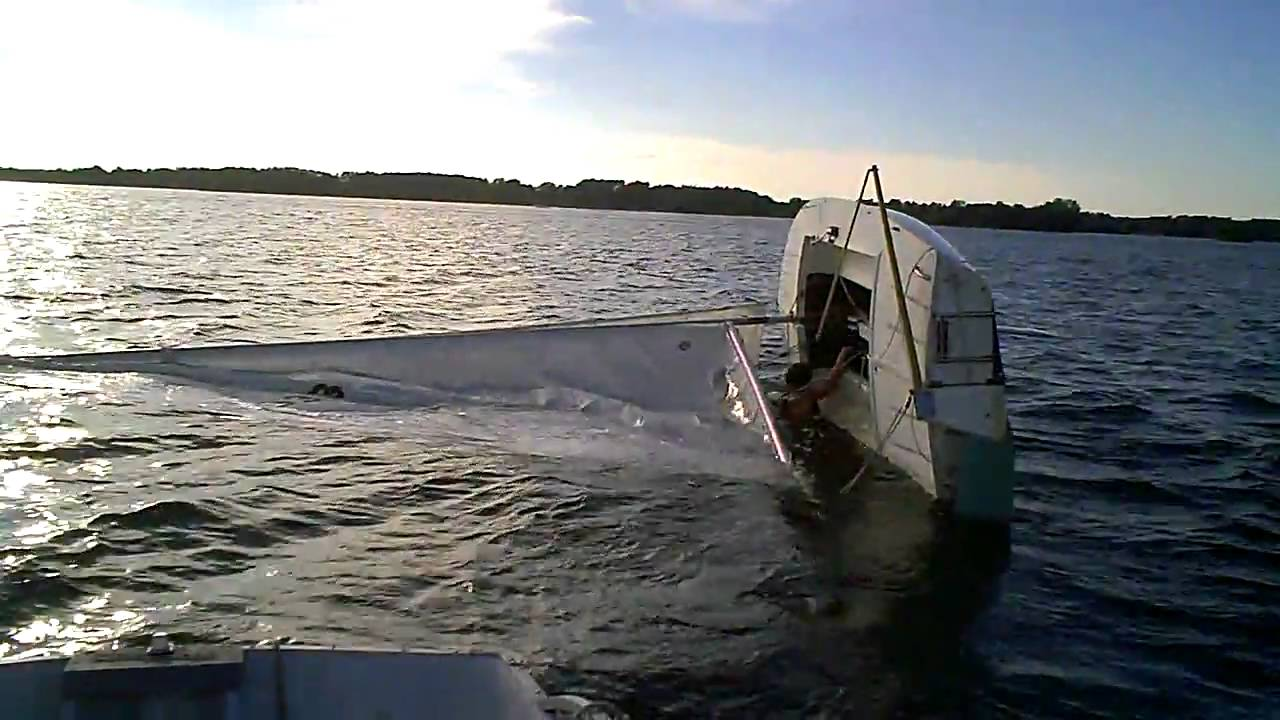 Slickcraft 26 Greenport, NY
I don't know a lot of folks who sail here who aren't up North now. Right now I'm content to sail on my schedule by my self. I'm certain I'll find new sailing friends but a year of Covid didn't help. Meanwhile, I'm sailing solo and getting used to the routine of the Martin County Sailing Center.
I did get to know some of the group 2 years ago doing RC work but due to various Covid related health issues I couldn't participate in RC this last season. So it's catch up time.
Your photo above is encouraging. "Flying Sidewalk!"
R

jon hansen said:
not even taking on water
Click to expand

Oh they will turtle, don't ask me how I know. 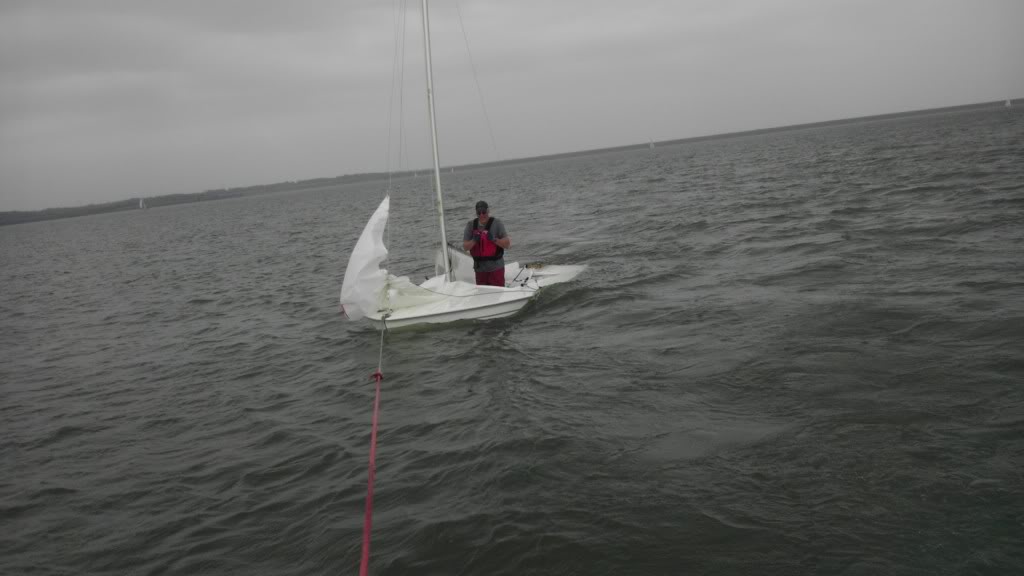 old flying scott ad photo bragging about it's stability. i'm sure as mentioned above that if you try really hard you can get it to flip, but it won't be easy.
B

- -- -Bayfield
I learned to sail on a Flying Scot. Hull # 818. That was a long time ago. Raced it too. Great, fun boats. Built like a brick SH, as they say (that's a good quality build). Used to call them Flying Sidewalks. 190 sq ft of sale. I recommend one to anyone looking for a great day sailor. Sandy Douglas also designed the Highlander which was a Scot on steroids. Much larger sail plan and went like a raped ape. Harder to handle, though.
You must log in or register to reply here.
Share:
Email Link
Top Bottom