Alden 38' Challenger yawl Rockport Harbor
The rigging chainplates are fastened through fiberglas hat frames into backing plates in Alden Challengers, Mistrals, Zephyr's and perhaps the Caravelles. There is other information on this problem on the website. This thread will be mostly photos of a repair on CHRISTMAS, a 1961 Challenger yawl.

The problem is in the backing plates that were used. Halmatic-GB, the yard that laid up the glass hulls and decks, used mild steel backing plates instead of Stainless Steel.

The hat frames are fiberglass structural girders designed and built to anchor and spread the load of the chainplates, to the hulls.

Photo below - Typical-small mizzen hat frame 1960: Trapazoid in shape with a large end at the deck; they taper and disappear, or join a typical 'frame' that was built of fiberglass. 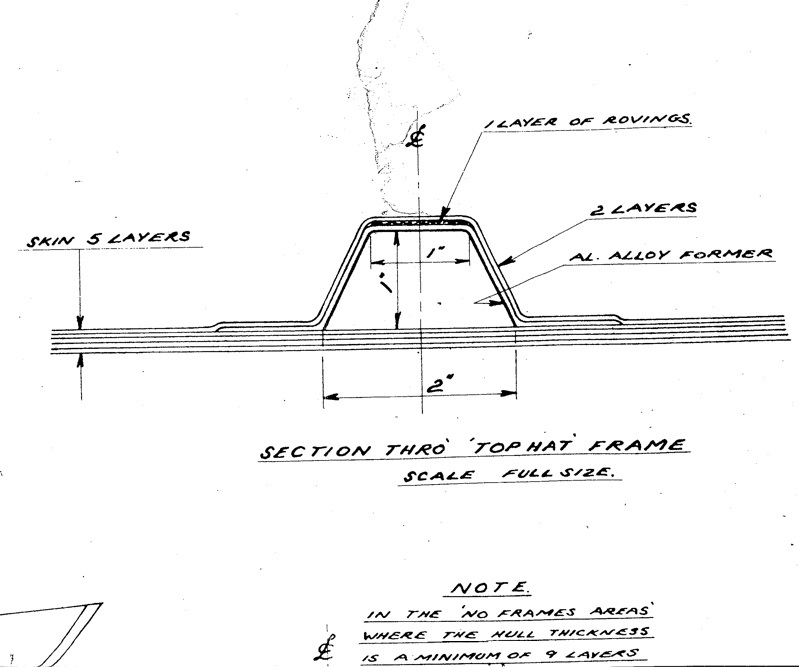 Alden's design office, 15 to 20 years ago, told me they were unaware the Halmatic was using mild steel instead of SS. That is conceivable: The hat frames were hand laid around an aluminum former which was pulled - from above - once the glass had cured.

Then the solid glass decks were fitted and fastened to the hulls, all the joins glassed, sealing the backing plates inside. The idea was likely that these tombs would never see water so why not mild steel? Because water always finds a way in.

I've replaced a couple on Xmas over the years. The accepted process is pretty easy: Cut into the hat frame from the side, pull the old rusted plate out. Typical cut and grind on a Mistral : 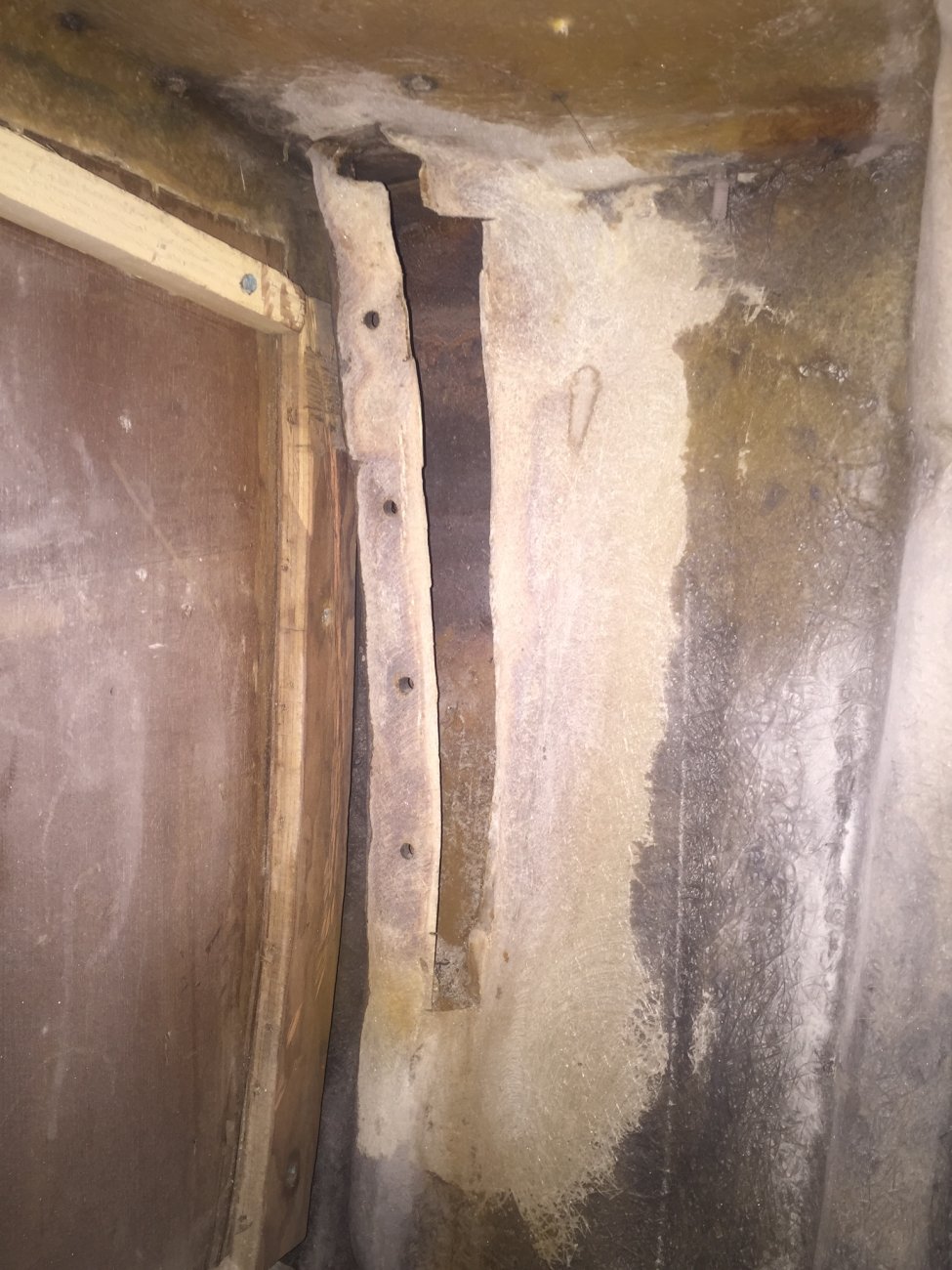 And a typical layup repair on a Challenger(unknown which): 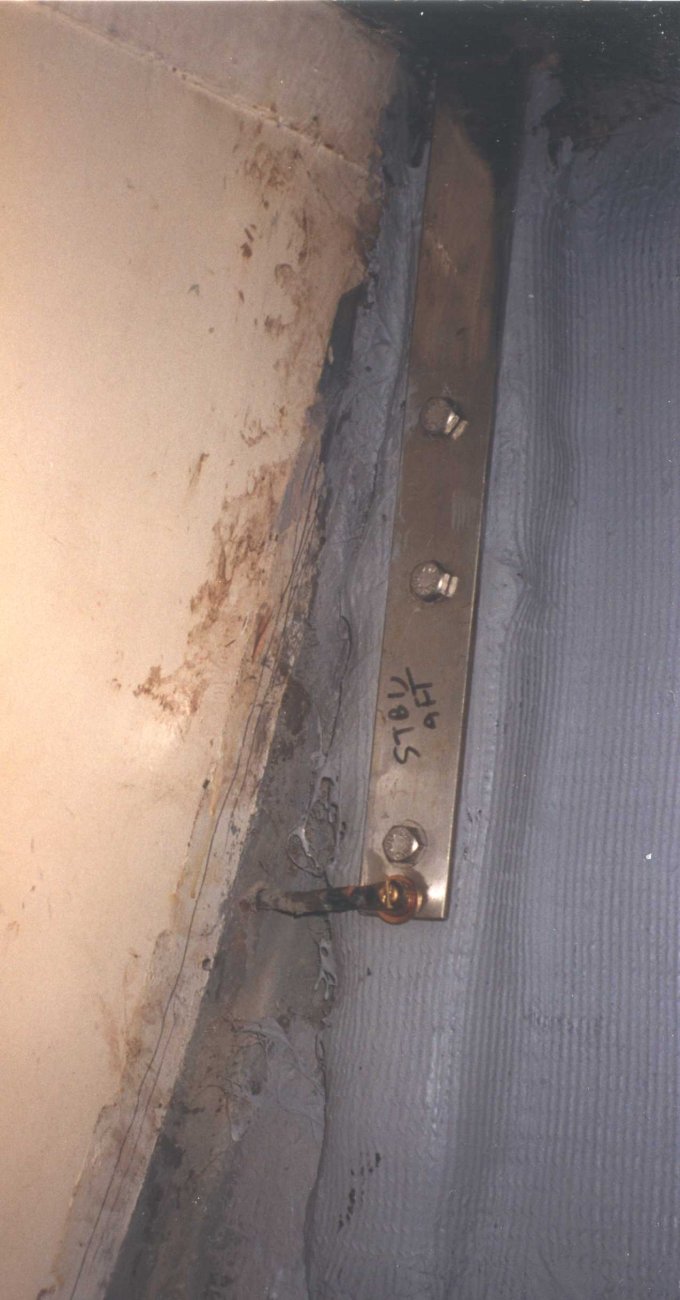 This is the worst Challenger backing plate failure I've seen: It was behind the head furniture and ceiling (Xmas): 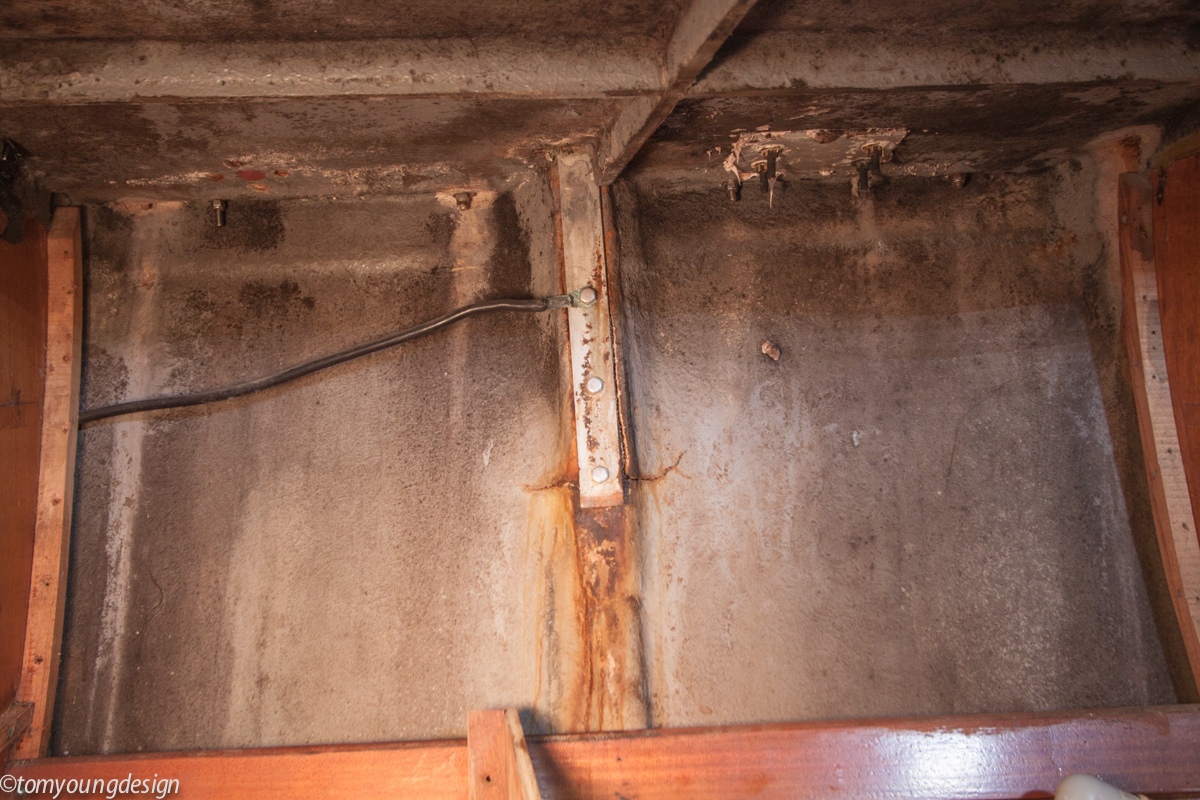 It's also the only hat frame on Challengers (I believe), that isn't backed up to a bulkhead. Close inspection revealed the backing plate rusted and expanded inside the bottom of the hat frame, splitting the glass structure from inside. A first cut into the hat frame: 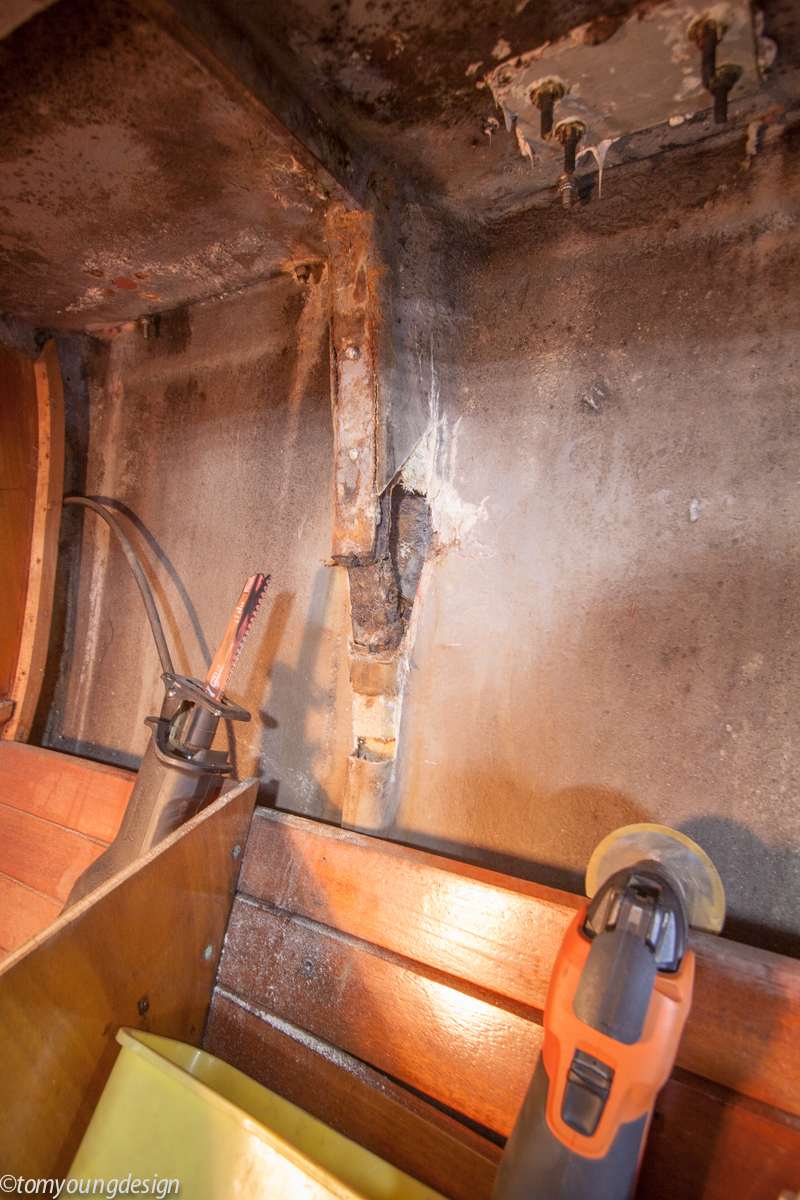 The swollen backing plate (4x's it's original thickness) had actually bent under the rigging load. It was clear I would have to cut most of the hat frame away and grind the damaged glass hat frame layers that are adhered to the hull structure which was not damaged and very thick. 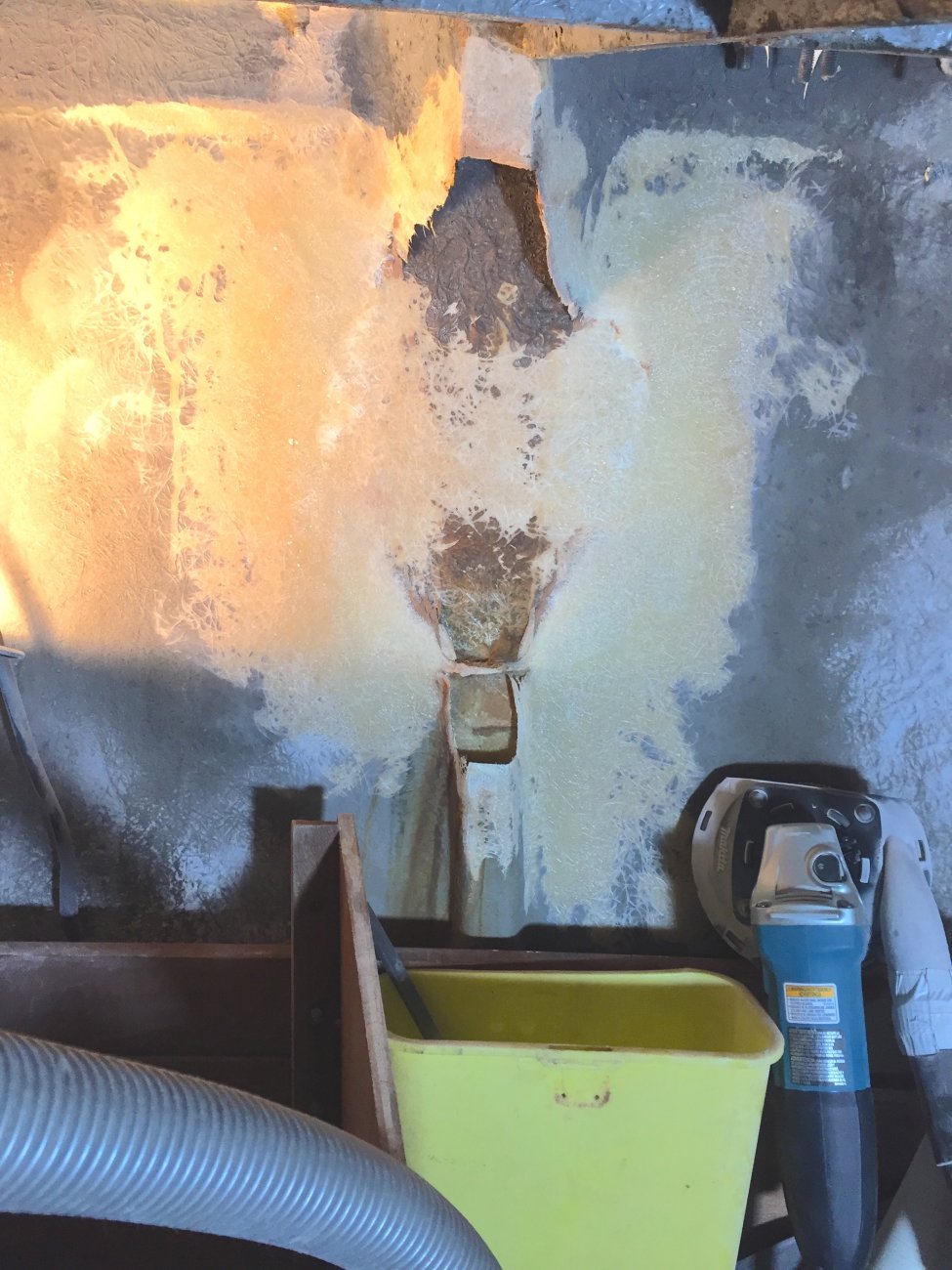 I was able to save the upper third (scarfed with a grinder 8-10 to 1) of the hat frame as a form to start a new structure. I cut a wood former to form the trapazoid shaped hat frame.

The form, wrapped in plastic, in place to start the lay up: 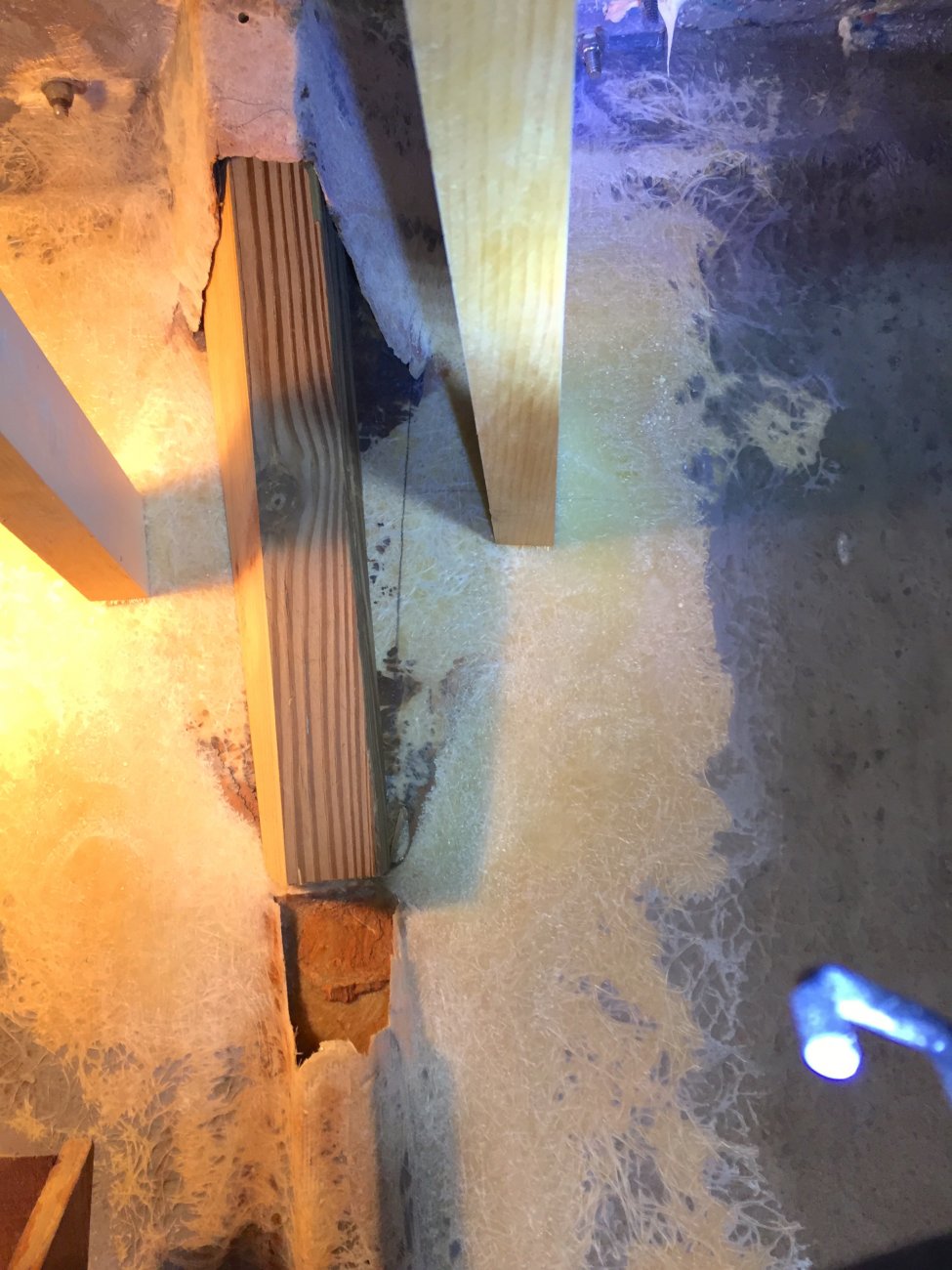 With a first layer of 10 ounce fiberglass cloth forming an open frame - with one side left open to insert the new backing plate: 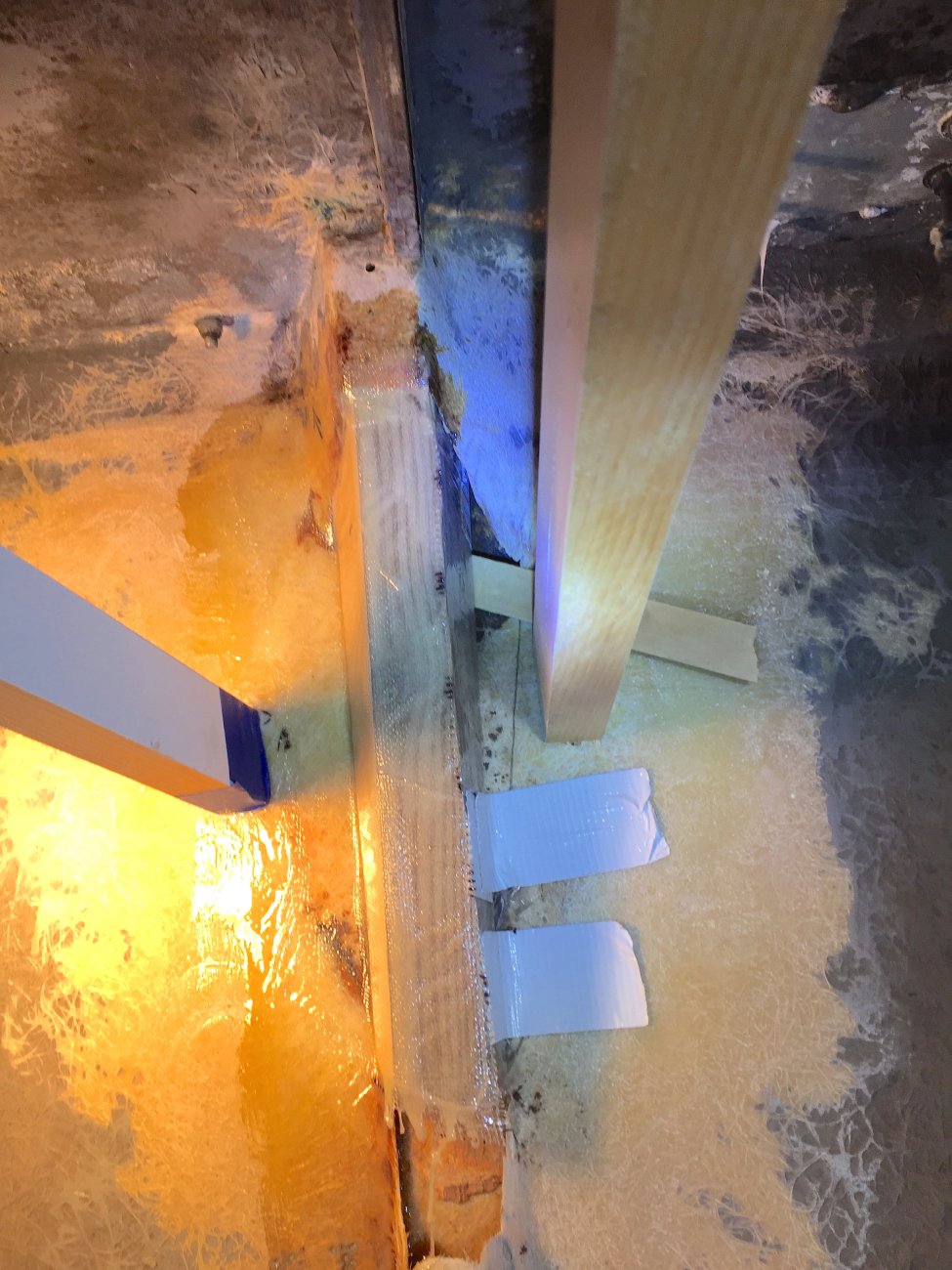 The fabricator took the old chainplate and my measurements and did this: Cut the two pieces of Stainless steel to my lengths, tacked welded them together, drilled through each (at the spots on the old chainplate) with the tap sized bit (3/8" thread), split the pieces. Then he tapped the threads into the backing plate and cut a proper clearance hole in the chain plate for the new 3/8" bolts. 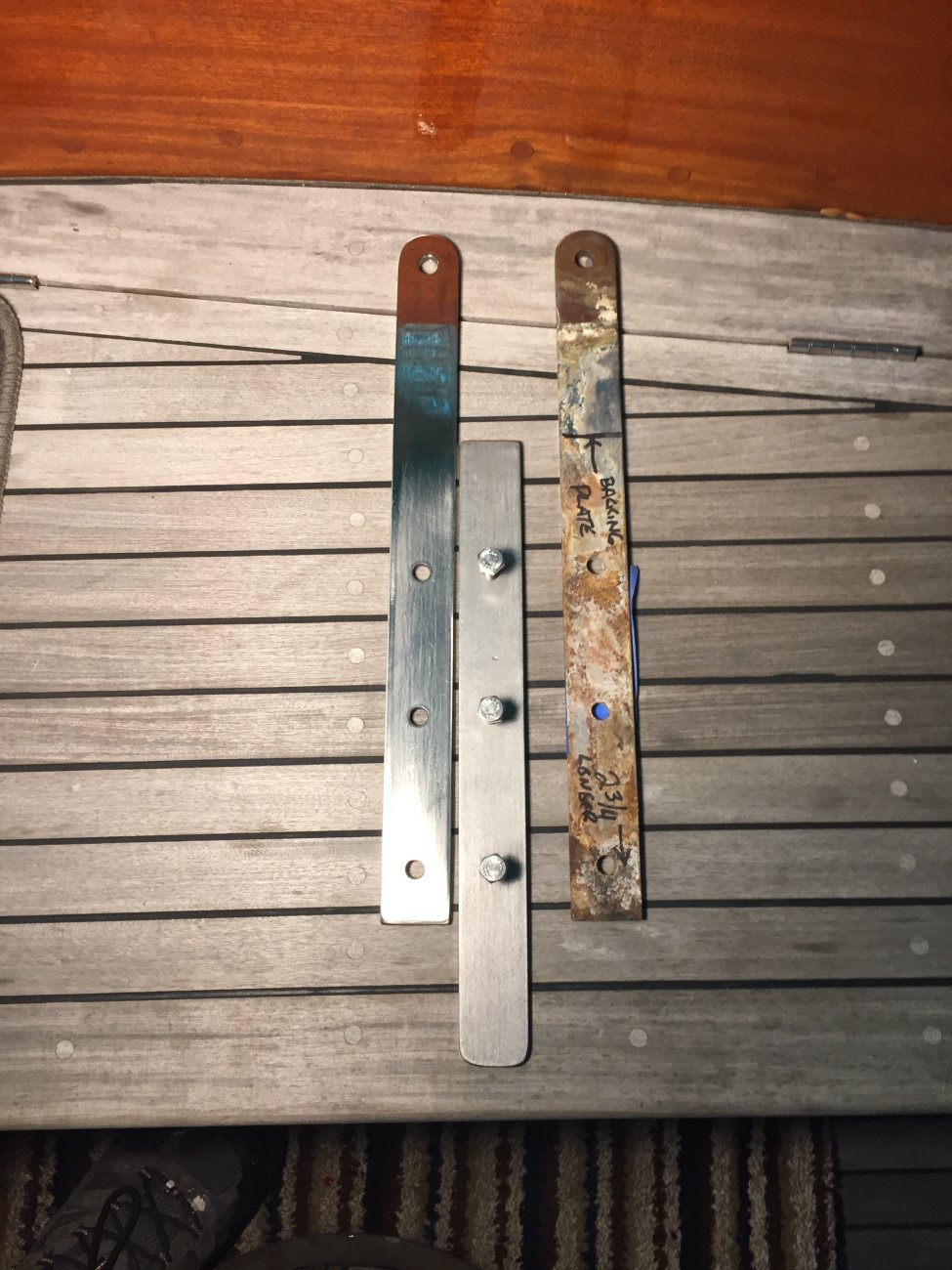 I pulled the temporary form, hung the old chain plate through the deck at the original location, marked the first layer of the new hat frame, and drilled the holes. Then I fit the new backing plate inside to test with the new chainplate. Satisfied, sanded the new backing plate mating surface and spot epoxied in place. I also replaced a wooden former that closes off and starts the rib below.

Then another layer of 10 oz. cloth in epoxy to close and form the base of the new hat frame that extends to the frame below. 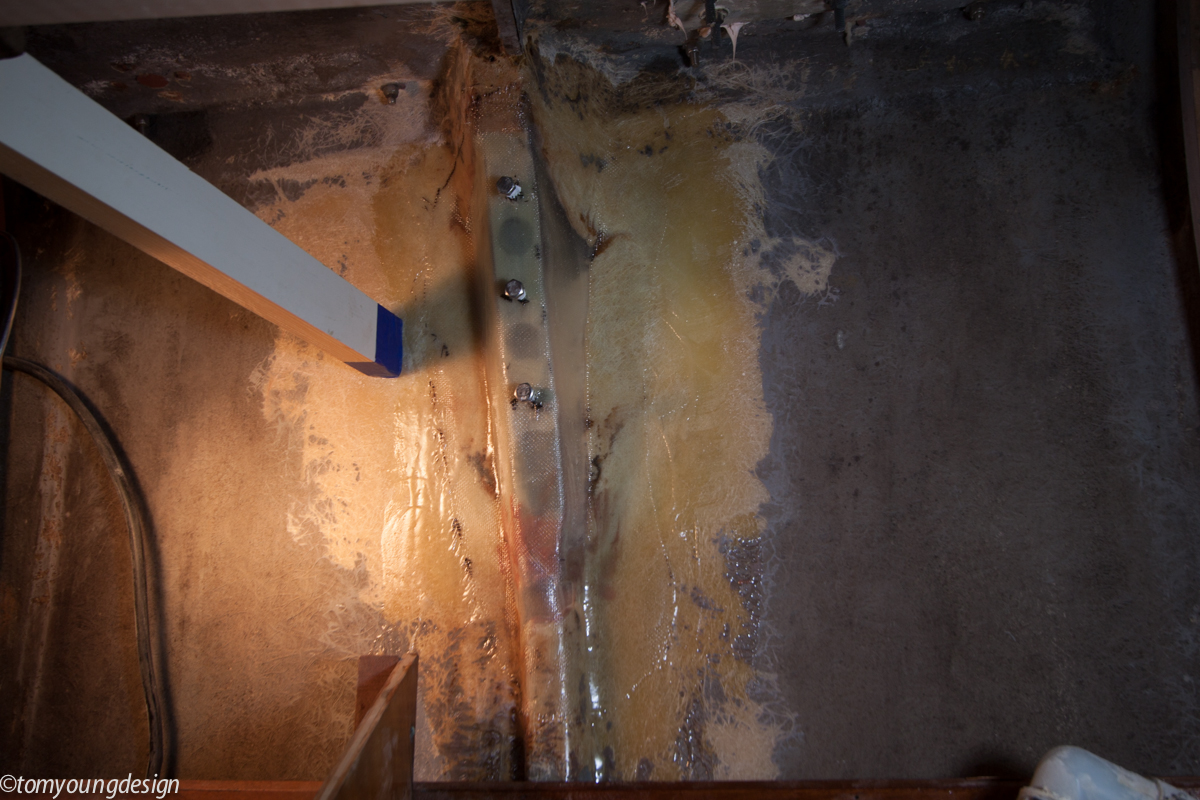 After a full cure it was sound to begin the layup of glass. The old hat frame was a 1/4" thick at the minimum. It takes a lot of cloth to build up a thickness of 1/4" . After a good cleaning and sanding to form a good bond, I started laying cloth on a Saturday.

I'm at the photo limit so will post this and continue below.
Likes: jon hansen

Alden 38' Challenger yawl Rockport Harbor
Another 10 oz. layer and then I started sandwiching 24oz. woven roving cloth for strength. Three layers of the heavy cloth were interspersed between layers of 10oz. The middle layer of 24 roving was laid on the bias of the cloth. I put on 7 layers squeezing out the cloth as best I could in an afternoon. You'll note I had temporarily fit a strong back across the bulkheads and put outward pressure on the hull in this area. Checking the hull fairness with a batten outside, things looked good. I wanted the hat frame to cure on a fair hull. 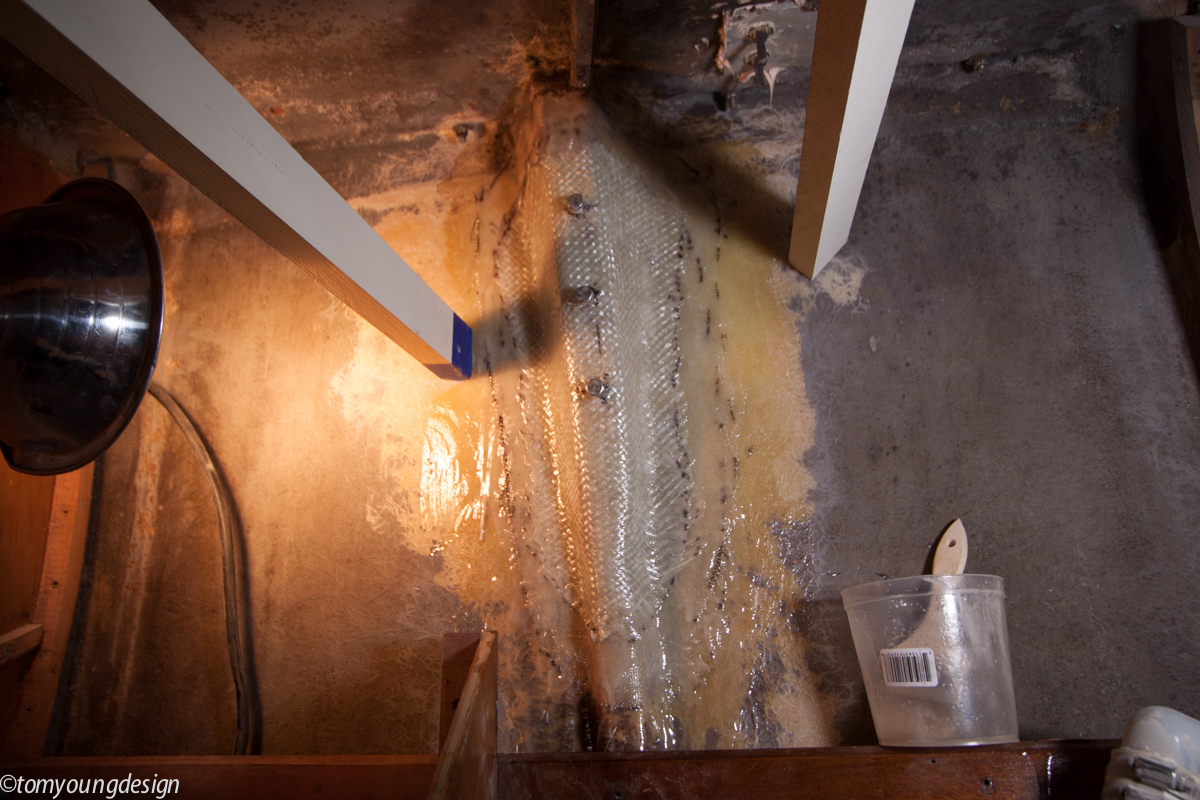 The 3/8" bolts threads were completely covered in Teflon tape to keep the epoxy from sticking. It went quickly once I got the system down. It was easier to do the 'wet method' that West system has in their guides. 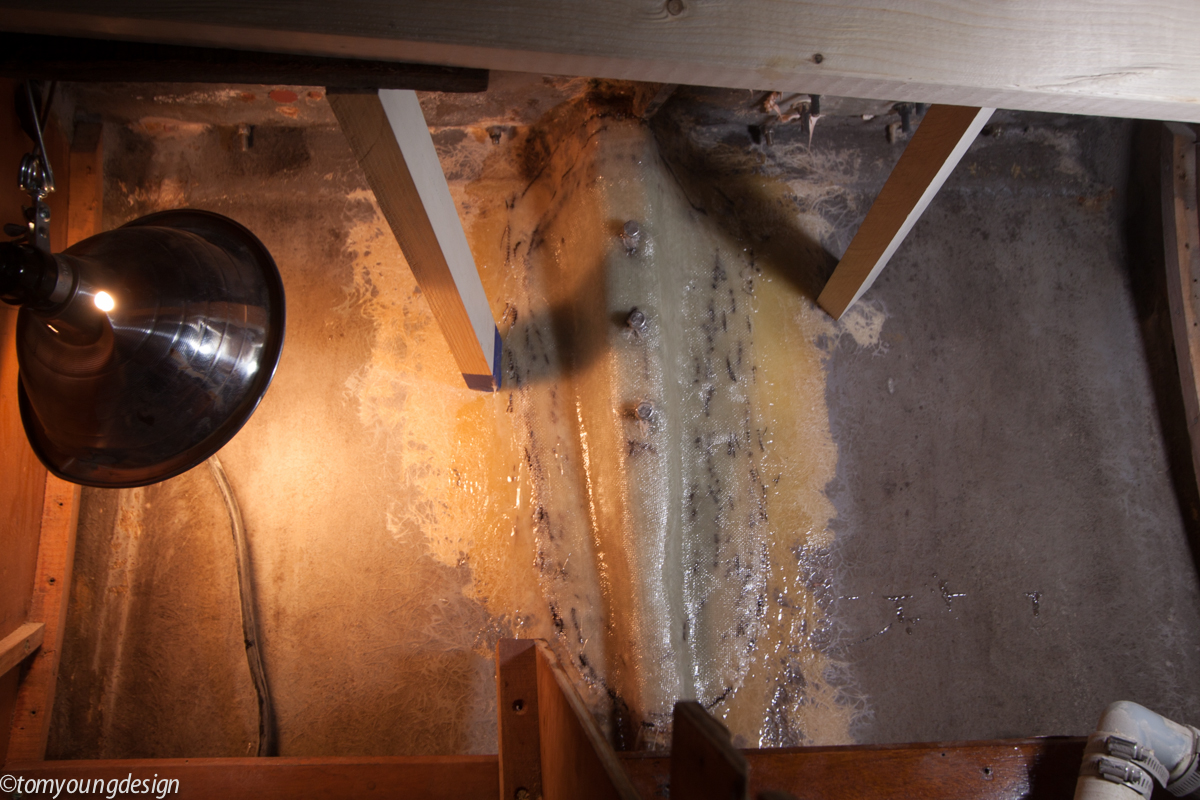 Looks aren't too important here, a good chemical bond of the layers and to the hull was my main goal. I let the 7 layers cure over night. The next day, after cleaning and sanding, I added layer # 10, in 10oz. cloth. 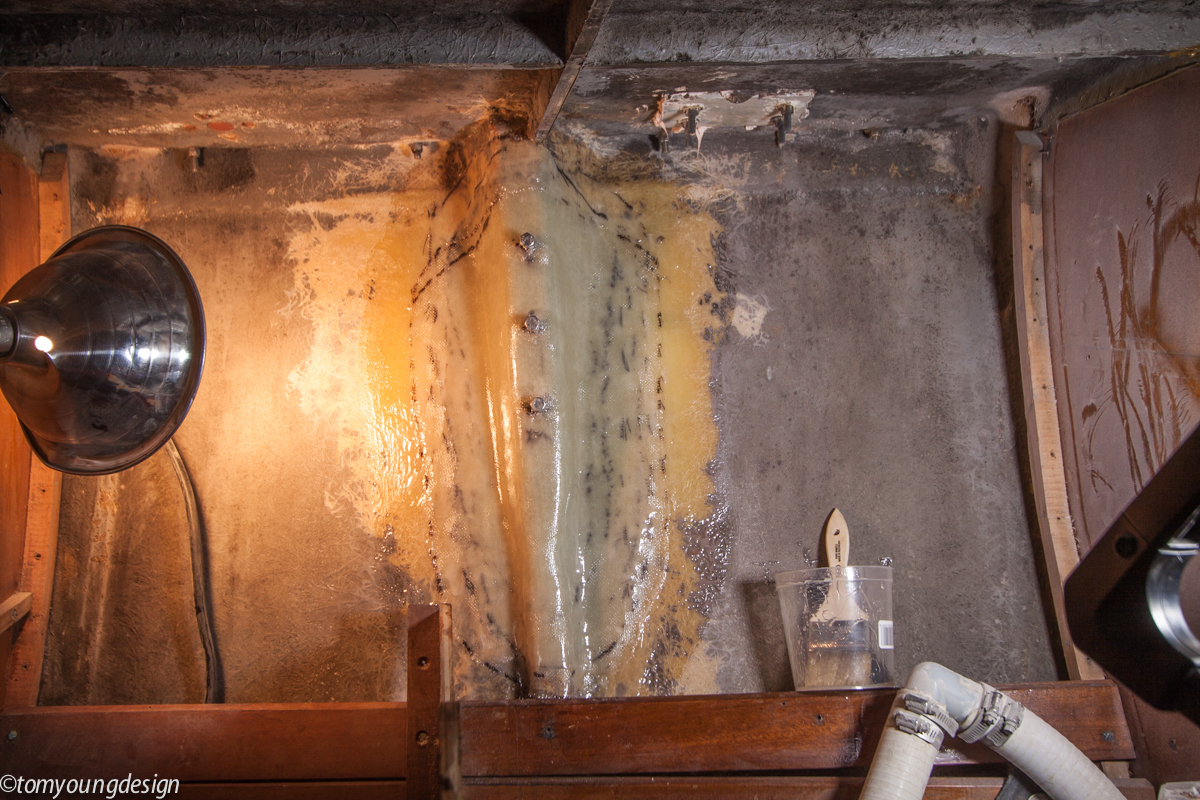 The hat frame, by looking through the thread holes, was a good 1/4" + thick. Plus my layers, including the heavy roving, extended well beyond the original and spanned the built up joint to the hull frame. 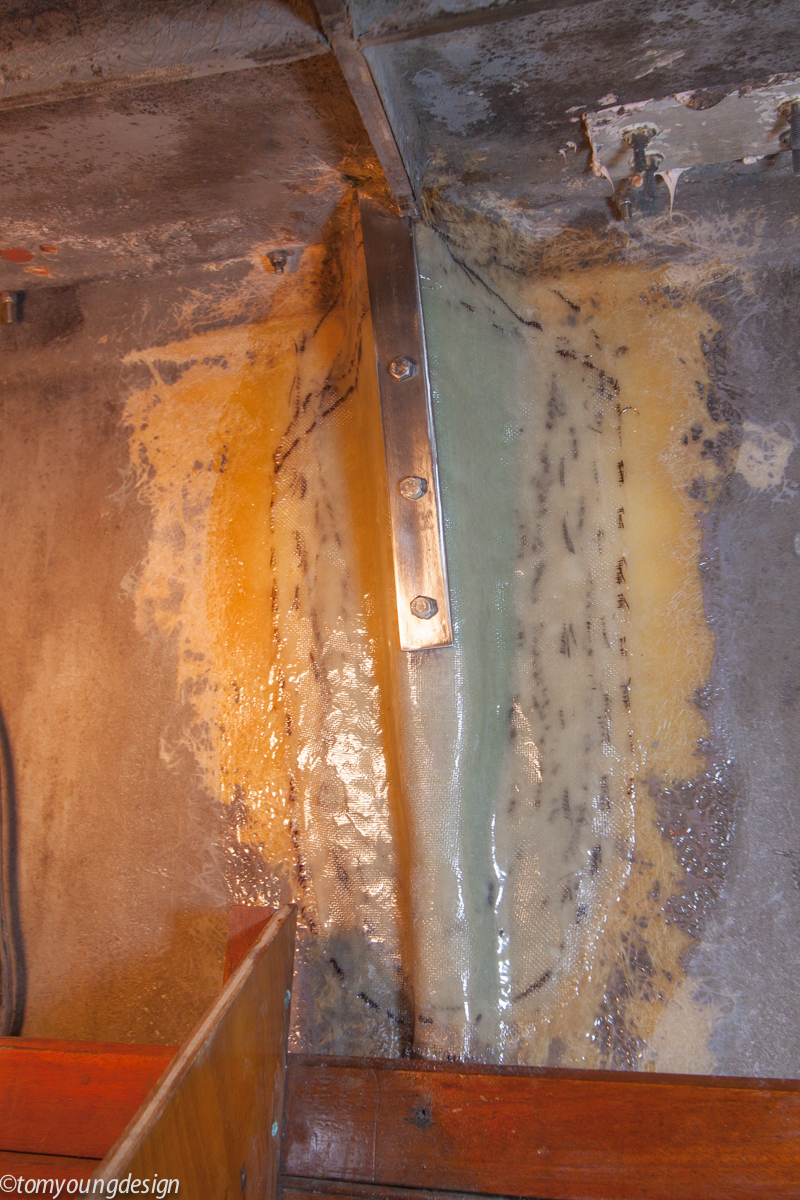 The section side shows the depth: 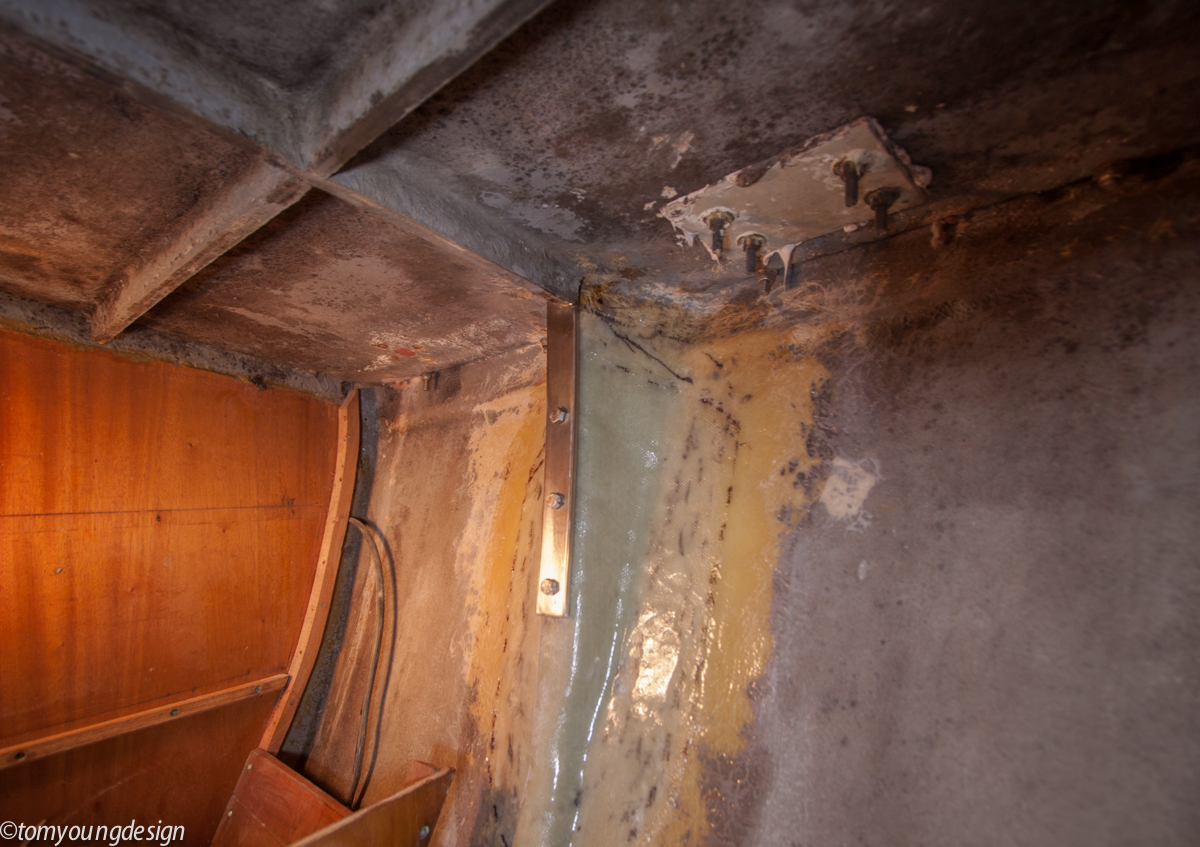 Not the easiest place to work but time spent doing the actual work, a few hours at a time, wasn't bad. The head furniture is out and getting a sand and coat of paint and or varnish. I'll install that in a few days. I'll also edit this post over time, when I have time. 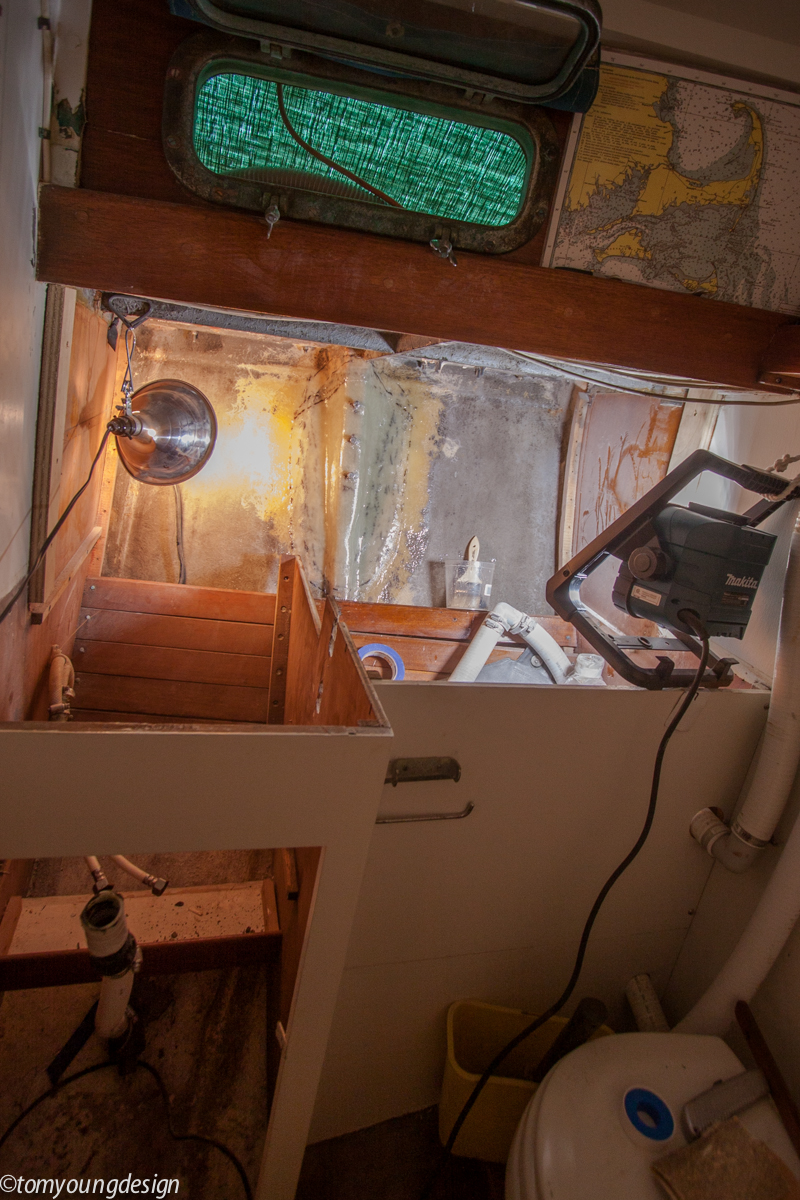 CAL 35 Cruiser moored EVERETT WA
Nice work Tom. I am trying to follow this. The original appeared to be a hollow form. You stuck a piece of wood in the space to be able to form the new hat frame. Did you remove the wooden forming piece then inset the stainless backing plate? Or did the backing plate just get glassed in? It appears that the backing plate is stainless. How does the stainless get air, and not get wet? Even stainless, in the absence of enough oxygen can develop rust or suffer from crevice corrosion.

Beneteau 411 Oceanis Annapolis
“Hat frame” ? There’s a new one for me. What is a hat frame? Looks like what I might call a knee brace.

jssailem said:
Nice work Tom. I am trying to follow this. The original appeared to be a hollow form. You stuck a piece of wood in the space to be able to form the new hat frame. Did you remove the wooden forming piece then inset the stainless backing plate? Or did the backing plate just get glassed in? It appears that the backing plate is stainless. How does the stainless get air, and not get wet? Even stainless, in the absence of enough oxygen can develop rust or suffer from crevice corrosion.
Click to expand

Thanks for asking! I had hoped the photos would make up for my short post. There is a new Alden owner dealing with this repair and I wanted to post info he might find useful.

The hat frames are indeed hollow. I removed the wood form (it was wrapped in plastic to protect from epoxy) after the first layer of cloth cured.

That first layer was just one side of the hat frame and the mating face of the chain plate. The right side had no glass layed (the side with the white duct tape). This allowed sliding the wood form out and inserting the new backing plate that is on the inside of the hat frame.

The backing plate is not part of the glass lay up(it was only tacked in place with epoxy to keep it in proper alignment for the bolts when they are removed), other wise it would fall off inside the open cavity.

Early on, Alden recommended weep holes be drilled into the hat frames to allow drainage. I'll continue that practice and in fact put a few top and bottom, around 1/4".

I'm confident the SS backing plates will be fine over the long term with the holes (especially as the mild steel lasted this long).

We have found with many of these chainplate connections, even when the backing plates corrode, as long as the bolts are tight the chainplate and hat frame are solid. Still, when the show corrosion (most do), they have to be replaced as most are now over 50 years old.

Gunni said:
“Hat frame” ? There’s a new one for me. What is a hat frame? Looks like what I might call a knee brace.
Click to expand

It's an old one in fact. Alden called them "Top Hat Frames" in the 1959 plans. I can only guess that they thought trapazoid profile and glass lay up looked like a Top Hat? Top hats were more common back then? Beats me.

Here's another, a little smaller on a Mistral, that was repaired at a boatyard. 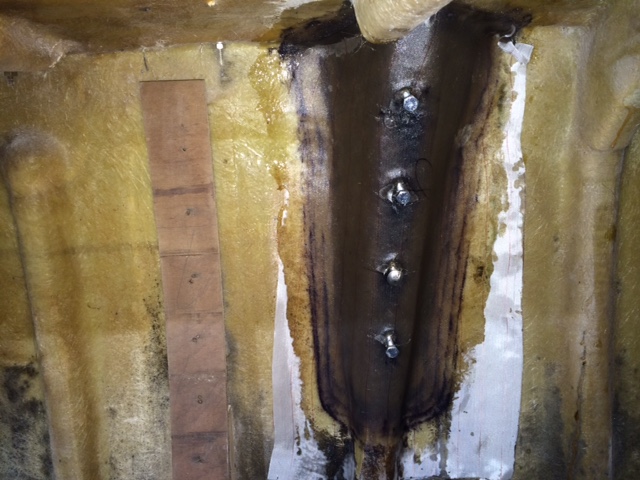 Beneteau 411 Oceanis Annapolis
So a hat frame is a composite structural member, molded on a fitted mold, then glassed in?
Likes: jssailem

Gunni said:
So a hat frame is a composite structural member, molded on a fitted mold, then glassed in?
Click to expand

It could be done that way but these were all formed originally, in place on the interior of the hull. The hat frames, trapazoid in shape, are tapered.

Once the lay up of these structural members was complete, the aluminum forms were pulled from above and the steel backing plate (drilled and tapped to match the chainplates), was fitted inside the hat frame.

Then the fiberglass deck was lowered onto the hull, bolted and glassed at the joint, sealing the hat frame(with the backing plates inside).
Likes: Gunni
You must log in or register to reply here.
Share:
Email Link
Top Bottom