Nauticat 321 pilothouse 32 Erie PA
i have great respect for the professionals who navigate to bring those huge cargo ships safely into ports. here's a video of how the pilot gets onto the carrier ship s/he's to pilot: 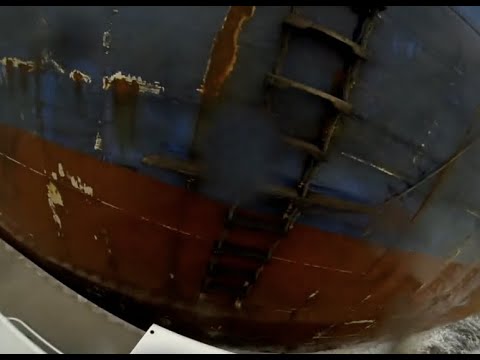 Chesapeake Bay pilots—the kind on the water, not in the air—guide massive cargo ships safely through the Bay's channels every day. But many people don't know just how these local pilots board…

Hunter 26 Charleston
That was a lot of fun. Thanks. The next video that popped up for me on that channel was also a nice.... here it is.

CAL 35 Cruiser Portland OR, moored EVERETT WA
Enjoyed both of the videos.

Hunter 33 Metedeconk River
I don't know if this is a true story but was told to me a couple of years ago by this NY Harbor pilot.

A ship was coming into NY on its maiden voyage and this pilot was put aboard to bring it to the Brooklyn dock. The ship's captain being very protective of his ship did not want to turn it over to the pilot. There was an excited discussion and finally the USCG had to be called in to settle the dispute. Finally, the ship was turned over to the pilot, but now the pressure was on to bring the ship in safely. He brought the ship dock side perfectly and everyone was happy. One the way home he had to stop at 7-11 for milk and when leaving the parking lot he backed into a sign post. LOL.

He told this to me as true, but could be only a legend.
Likes: jssailem

Ericson Yachts Olson 34 Portland OR
Trivia: info from multiple presentations by Columbia Bar Pilots: USCG does not permit them to physically take the wheel or the controls of a ship due to liability.

They tell (perhaps at times YELL) at the captain instead. If that ship runs aground their fingerprints will NOT be on that wheel.

Having said that, extreme circumstances may require extreme responses.....

In the last decade or so, these pilots have changed boarding from swaying rope & wood ladders to helicopter transfer..... they say it is a LOT safer for them.
Likes: BigEasy and jssailem

CAL 35 Cruiser Portland OR, moored EVERETT WA
On a ship if you have command, your fingerprints are "EVERYWHERE" even if you touch nothing.

Those guys are incredible. Boarding a ship in a stormy sea is not for the faint of heart. Big bucks paid for big responsibility job. Truly a Merit System.

Pearson 530 Admiralty Bay, Bequia SVG
Before I was allowed to sit for my Commonwealth mate's exam, I was made to pilot the ships entering and leaving Port Moresby. I never had any trouble doing the job or an incident, but on my first day the pilot with me recounted a great story.
As you enter the port going north, with the pier to the west, you are bow to the perpetually strong (225 to 30 knots) prevailing wind, and make a big circle until you are headed south and your bow is pointed about 2/3rds of the way west on the wharf.
On one particular day, a few years earlier, the pilot was at the point he needed to swing the helm hard over to starboard and put the ship in reverse, so that ideally, she would stop just a few feet and parallel to the wharf. At that instant, the ship lost all power which includes motive and steering, so she plowed right into that wharf, nearly cutting it in two.
As the story is told, the captain was in a tizzy, almost literally tearing his hair out. He turned to the pilot and screamed, "What do I do now?" The pilot responded very calmly, "Put a ladder over the bow. My job is done!"
So, a point of fact, though in many places a pilot is mandatory, the master is still the responsible party and having a pilot aboard doesn't necessarily mean you are in good hands. I've always been lucky, but I still prefer to get my pilotage exemption whenever possible as soon as I can. My Orinoco (300 miles up the river) pilot was on his last ship of a 30 day duty and he did great, but he was exhausted and we had to keep waking him up.
Likes: jssailem

FastOlson said:
Trivia: info from multiple presentations by Columbia Bar Pilots: USCG does not permit them to physically take the wheel or the controls of a ship due to liability.
Click to expand

Since, on most big commercial vessels, the wheel (these days usually a toggle) and the controls, are not within arm's length of each other, you have a helmsman and another crew member taking orders on the shifting mechanism, not the captain 'driving' the ship. Whom ever is doing so, gives course changes to the helmsperson, usually in degrees (5 degrees port, please. center helm, please, etc) and engine controls in direction (ahead, neutral, reverse) and rotations (RPMs) of the shaft.
I have never heard of a pilot ever actually operating a vessel, even my tiny 131 foot dive boats in Port Everglades. He is only an advisor and the master can (but I've never heard of it happening, though I'm sure it has) retake control of his vessel at any time.

FastOlson said:
Trivia: info from multiple presentations by Columbia Bar Pilots
In the last decade or so, these pilots have changed boarding from swaying rope & wood ladders to helicopter transfer..... they say it is a LOT safer for them.
Click to expand

Witnessed that first hand on a cruise ship leaving Astoria, Oregon. Saw a helicopter approaching the ship as we had cleared the Columbia River Bar. I didn't know what to make of it, in these days of terrorism, etc. Sure enough the helicopter positioned over the aft deck and hoisted the pilot off the ship using a harness. I was definitely relieved, as I had never seen that method of pilot delivery / extraction.
Thing about it was it really wasn't a rough day; fairly benign conditions.
Likes: FastOlson and jssailem

CAL 35 Cruiser Portland OR, moored EVERETT WA
I remember an incident in the late 50's, My Dad was aboard the USS Gardners Bay. We were waiting (about 0800) on the pier, Hunters Point, for the ships arrival after being as sea for 90 days. The time of arrival came and went. It was foggy in SF Bay. After 2 hours wondering what was happening, an officer came down the pier and assembled the waiting families. He announced that the ships arrival had been delayed until later the afternoon. Off to lunch then back to the pier to wait. About 1500 the ship approached to the cheering families. But the bow looked funny.

It appears that the pilot, who boarded outside the Golden Gate, had misjudged the currents in the fog coming under the Bay Bridge. The captain reacted giving a command full astern, but was just a bit late. The ship hit the concrete base of one of the Bridge towers. The ship looked like a boxer who had taken too many blows to his nose.

The good news was the ship would be in port for an extended time. Yeah we get to see Dad.

That was the end of the Navy's use for the USS Gardeners Bay (a sea plane tender and supply ship). She was transferred to the Norwegian Navy after she came out of the Ship yard. Repaired looking like new.

Never heard what happened as a result of the accident inquiry.

FastOlson said:
Trivia: info from multiple presentations by Columbia Bar Pilots: USCG does not permit them to physically take the wheel or ....

In the last decade or so, these pilots have changed boarding from swaying rope & wood ladders to helicopter transfer..... they say it is a LOT safer for them.
Click to expand

+1 on helipad landings. when I boarded an offshore platform it was much easier and safer to me via helipad versus a cranky crane operator with me hanging onto a basket And that was easier than a Jacobs ladder swinging alongside of a ship
You must log in or register to reply here.
Share:
Facebook Twitter Email Link
Top Bottom