Hunter 23.5 As many as possible
In my quest for the perfect, do everything, trailer sailor, I've settled on the Seaward 26rk. This will be a significant step up for me, exposing me to a whole new set of systems, maintenance and repair (what I do when not sailing). I currently own a Hunter 23.5 and recognize that these two vessels are completely different and I will be jumping into the deep end of the pool. I will be looking at a 2004 26rk for sale (first year produced) this weekend and wondered if Seaward owners or others could suggest weak points in the early models or things I should be looking for on these unfamiliar systems. Is there any particularly difference in the early models than the late models that should concern me? I noticed that later models have a skeg where the prop exits the hull and the 2004 does not. The rudder appears to be a slightly different design, etc...

Any and all suggestions welcomed. Cheers! 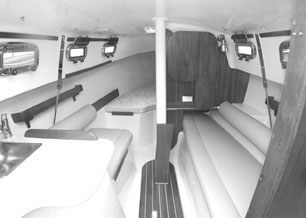 By no means just a stretch version of Hake Yachts' 25-footer, this new craft features a retractable keel and sensible pricing options.

Macgregor 26S near Vancouver, BC
I've settled on the 26RK, too. (Although I'm still considering 25s, as well.) I won't be ready to buy for another year or two, but I've been doing some research. The only thing of significance I've found is that there was a problem with a few early drop keels where the bulb started to come loose from the fin. So you'll want to have an especially good look at that area, and try to find out if it's in the range of boats with the suspected problem. I saw one 2004 advertised recently that had the keel upgraded; I assume that's what happened. It appears that this is not an issue on later builds.

Here's a depreciation curve I made based on asking prices of 26RKs and 25s advertised in the last few months. 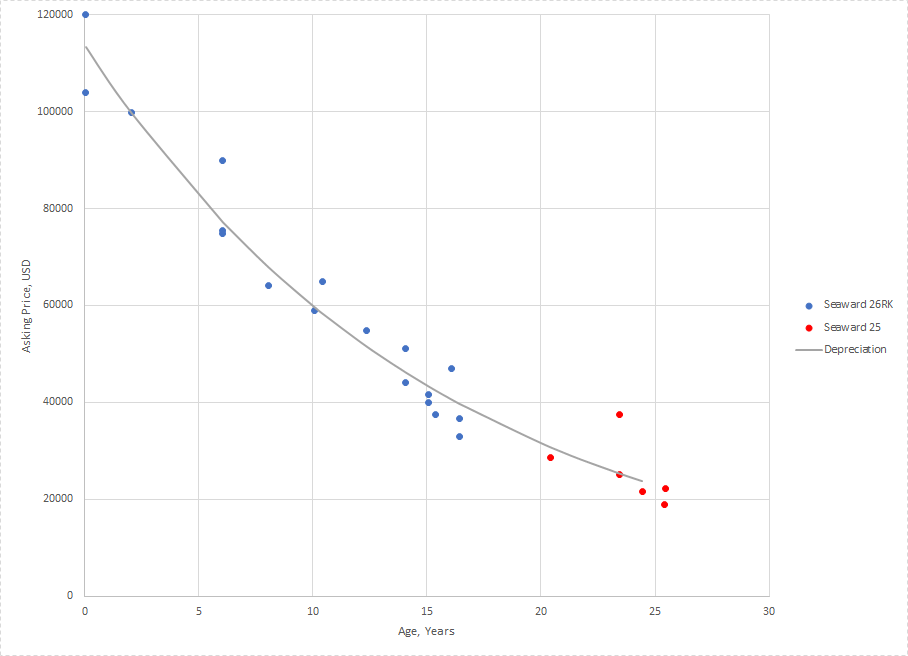 Hunter 23.5 As many as possible
I received a list of two dozen sold units in the last 5 years from a broker in FL that aligns with your chart. The depreciation slows considerable towards the front of the production line making older units a good value provided the keels stay attached, of course.
Last edited: Jun 12, 2020

JDE said:
I received a list of two dozen sold units in the last years from a broker in FL that aligns with your chart.
Click to expand

Actual selling prices? I'd be very interested to know the average difference between asking price and selling price.
J

Hunter 23.5 As many as possible 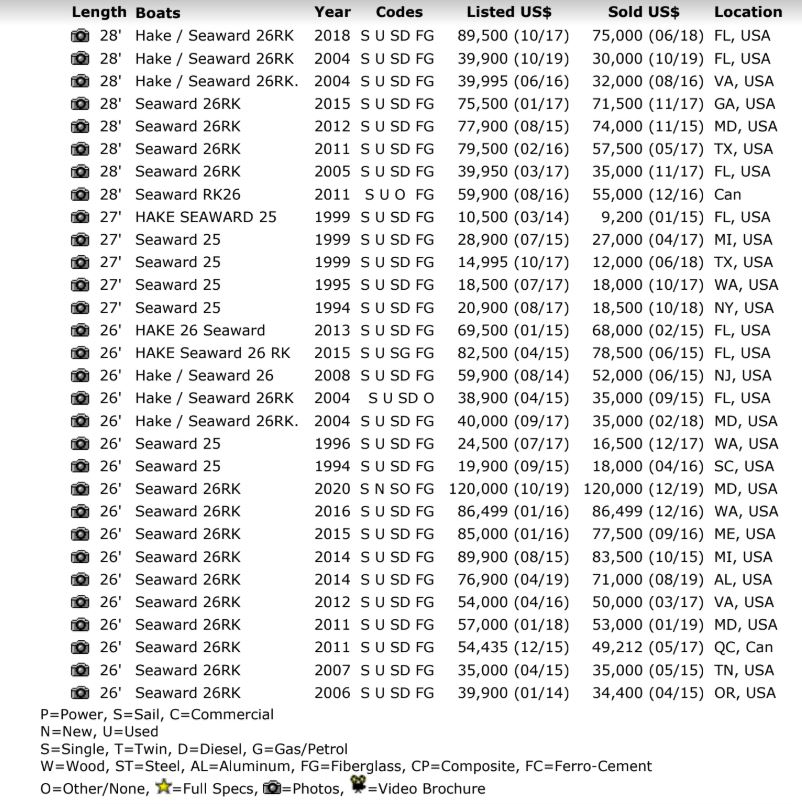 Hunter 23.5 As many as possible
Tedd - can you confirm the source of the detaching keel issue. Concerning to say the least.

JDE said:
Tedd - can you confirm the source of the detaching keel issue. Concerning to say the least.
Click to expand

I'm afraid it's just hearsay that has popped up on a couple of forums (including this one). I thought I had read it in a Practical Sailor article but I just checked the article and didn't see any mention of it.

The owner of hull #1 did post a few years ago that he had a problem with the keel jamming. I'm not sure how that worked out in the end.

Macgregor 26S near Vancouver, BC
@JDE :

That is some fascinating data! The depreciation comes out a little higher with your data set that with mine. But that's not the interesting part.

The distribution of price difference is pretty interesting, too: 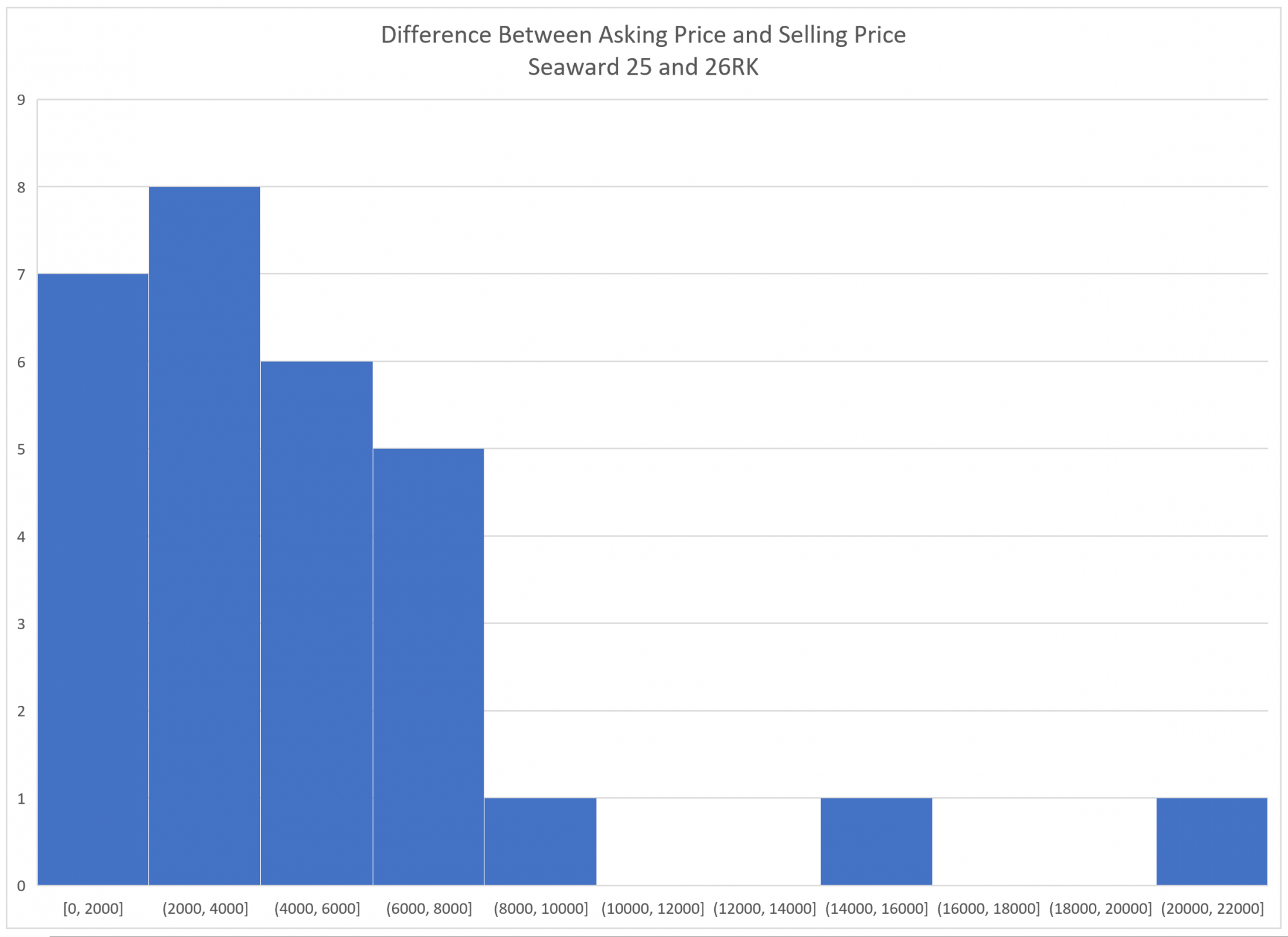 Hunter 23.5 As many as possible
I was able to find one comment on the keel and rudder design of older boats. Maybe it’s a thing but not mentioned frequently on the web. Could be a matter routine inspection and not running aground frequently. Hopefully someone with first hand knowledge could weigh in.

Hunter 23.5 As many as possible
I just spoke to Daryl Allen of Island Packet Yachts who are supposedly manufacturing Seawards. He said they offer keel upgrades for $5k if you have the bulb. It’s more if you don’t. Rudder upgrades too for $1500. Rudder upgrades are just for performance and ease of handling not a design flaw. He said the bulb issue is that the original design 2005-2009 allowed for the bulb bolts to loosen over time and in extreme situations of poor maintenance, fall off. I imagine never inspecting the keel or keel bolts on a Catalina could yield the same results. They have a new fabrication process that makes separation practically impossible. He said they perform upgrades on the order of one a month. If there is any sign of separation it should be replaced. I’m thinking I would do this proactively if I end up buying this boat.
Last edited: Jun 12, 2020

Macgregor 26S near Vancouver, BC
@JDE :

Great information, thanks very much for looking into that. I'll definitely keep that in mind as I shop. I had the impression that it was only the first few boats, but that range covers every boat I'm likely to be considering, so it's very relevant to me. It will factor into the price I'm willing to pay.

Seaward 25, Catalina 350 Erie, Pa
Either the 26rk or the 25 should do you well. We love our '96 Seaward 25. The issue with some of the early 26rk boats is that the bulb fell off the keel. That said, the keel and rudder went through some changes and improvements over the years. The latest version is a real nice improvement, but the latest version boat comes with a big price tag. If you can get hold of Nick Hake (he is still answering the phone, I believe, and brokering used Seawards), he can fill you in on the improvements he did over the years before Island Packet bought him out.

The 25's can be had for about half the price of a used 26rk. I like the interior of the 25 better as there's more room without the keel trunk in the way. The 26rk solves the arch compression issues that plagued some of the 25's and should sail better up wind with the deeper keel. Either way, both are very nice boats for cruising. We've had ours in Lake Ontario and Huron , Lake Champlain, the Fingerlakes, Penobscot Bay Maine, and Rhode Island.
Likes: sail sfbay

Macgregor 26S near Vancouver, BC
@sesmith :

Thanks for the feedback. One of the things I like about trailerables is how you can sail in so many different areas, the way you have.

You probably know who I am. For what it’s worth the Seaward 26 RK has a good reputation or name to include Catalina. Just like any new boats the first two or three may have had any issues but the company stood behind them. So you know.
Dave alias Crazy Dave
Likes: Sailavie1

Seaward 25 Nashville
We bought hull #1. The keel/bulb joint was not mechanically fastened. IRRC, there were 17 boats that lost their bulb before the redesign. It was not, as suggested above, a result of poor maintenance or grounding. It was a design issue. Hake paid for my trip to FL from IL and replaced the bulb with the new design.

Inflation has taken it's toll on new boat prices. We paid less than $50K for ours.

Greatly enhanced pointing ability with a deep foil and bulb keel. Tracked like it was on rails. The 25's shoal draft wing keel allowed a lot of leeway when pointing.

But, just like our current boat, a C-Dory 22, the boat drew the attention and compliments from sailors and non-sailors alike. There is a certain pride of ownership for such a great looking design. The keel trunk on the 26RK takes up a lot of room.

We owned several 25's. Our first was a new 98 model. We owned an additional 4 used ones as well as buying the 26RK new after our 25 burnt in front of our house on the trailer.

At ages 73 and 74, we no longer want to trailer a Seaward and raise and lower masts.

The 13th step of a 12 step Seaward program is a C-Dory.
Likes: sesmith, JDE and rgranger

Sounds like you're about a dozen years ahead of us. My wife and I have a loose plan to get a nice sailboat (e.g., the 26RK) and then, when we're feeling too old to manage it anymore, switch to something tug-like. The C-Dories are nice.

Thanks for your thoughts on the Seaward.

-Hunter 23.5 Kent, OH
This is not going to have any bearing on your purchase, just an interesting story. We went the opposite direction. Our first boat was a Seaward Fox 17. We absolutely loved that boat. It was a sturdy mini-yatch that handled like a dream. It was the perfect boat for our family of 4, at that time. But then we added 3 more kids, and our little boat was too little, so we traded to a bigger, but lesser boat. For the past 17 years we've owned a Hunter 23.5. While we also love this boat, it is absolutely a different boat. Where the Fox seemed to find her trim at about 5 degrees of heel, the 23.5 seems happiest at about 15. That was something that the family had a hard time getting use to .

We would have loved to get a Seaward 26, but for our young family, it was not even close to our budget.
J

Seaward 26 Oakdale, NY
RE: Keel to foil issues on older 26RKs.
The upgrage consists of bolting the bulb on through the bottom of the bulb. Older ones were bolted on through a tab on the top. Any groundings and/mishaps/lack of maintainence(?) affected this connection.