Hunter 26 San Diego, CA
Just ordered one of these. It may seem a little small, but there will be no ice taking up space. I like that it will fit in the factory provided cooler space without modification to the countertop lid. 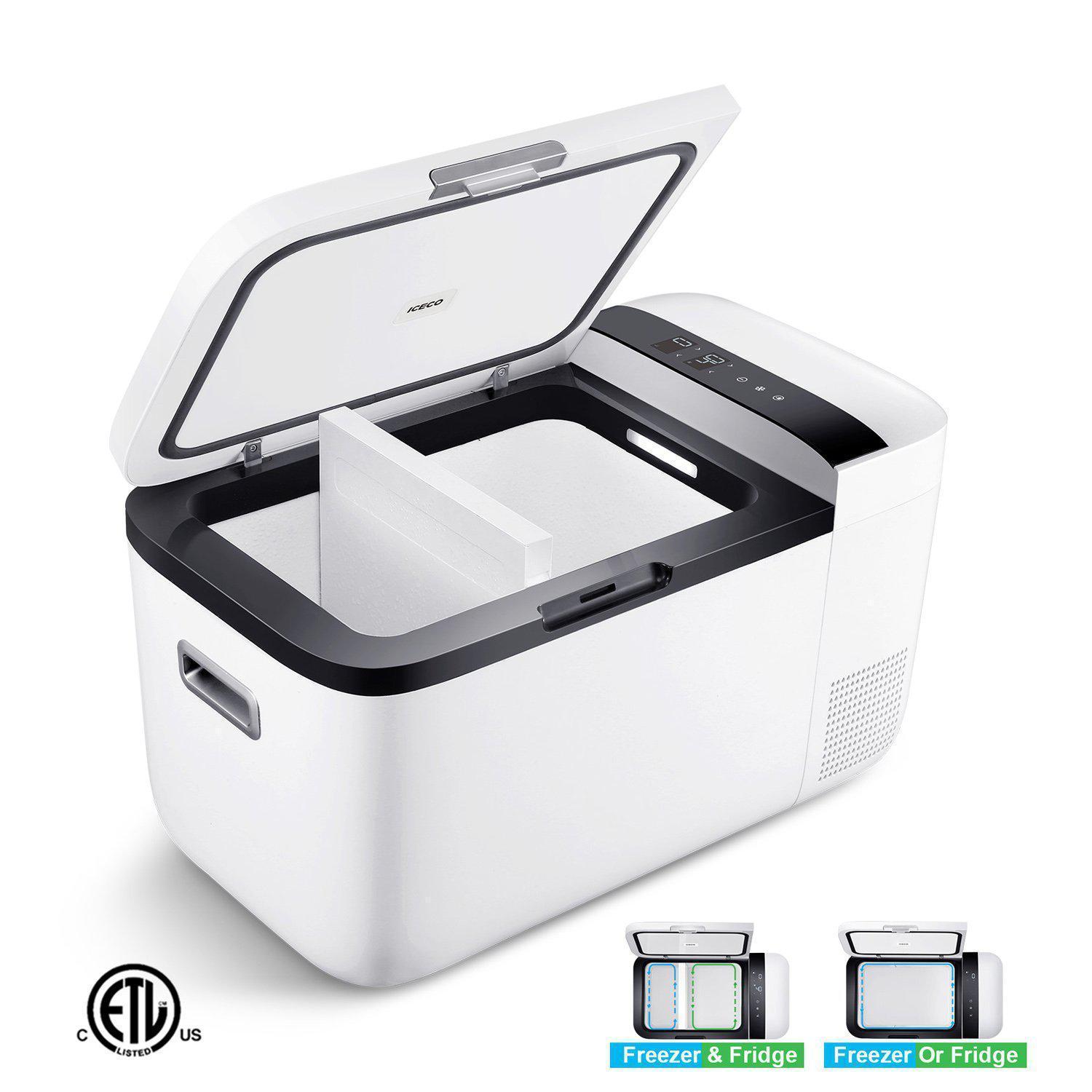 Hunter 260 Colorado
Ill never go back to Ice. I have Dometic CF40 as a fridge and a CF18 I use as a freezer occasionaly. Freezer mode uses a lot of battery 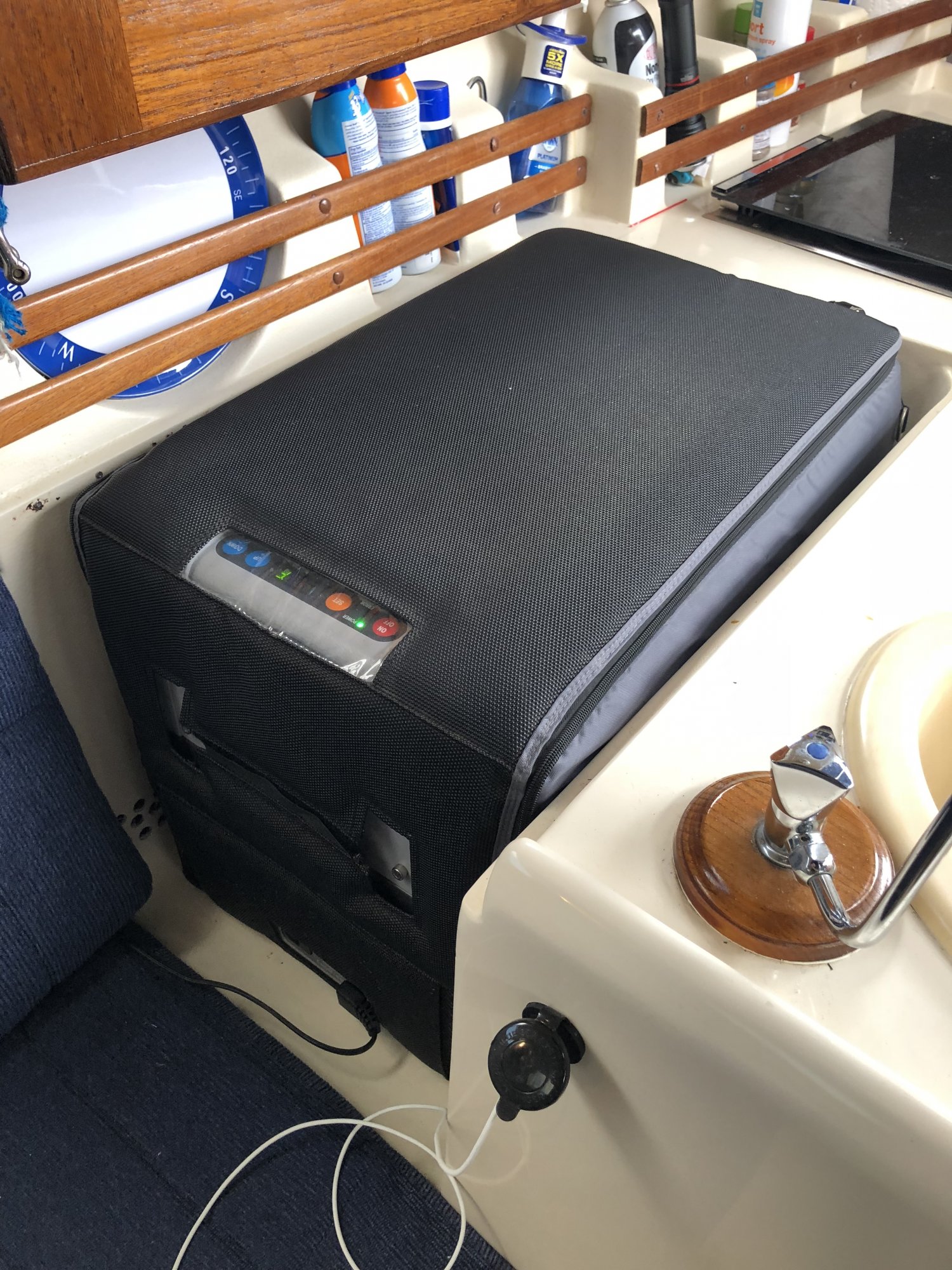 Macgregor 26S near Vancouver, BC
I've been trying to find out what the current draw of these things is. I couldn't find it on their web site. Has anybody measured one, or got specs?

Tedd said:
I've been trying to find out what the current draw of these things is. I couldn't find it on their web site. Has anybody measured one, or got specs?
Click to expand


ronhanson01 said:
Fridge mode mine uses about 1ah once cooled down
Click to expand

Ron, could you explain what that means, please?
R

Hunter 260 Colorado
It will draw 1amp/hr on average. So compare that to your power storage

ronhanson01 said:
Fridge mode mine uses about 1ah once cooled down
Click to expand

Thanks, @ronhanson01 , that's what I'm looking for.

Do you know what it's typical duty cycle is (assuming you don't open it)?
R

Hunter 260 Colorado
Around 25%. I do have the extra insulated cover also

ronhanson01 said:
Around 25%. I do have the extra insulated cover also
Click to expand

Hunter 36 Punta Gorda
There are many of these made by different names and Engel is the best but most $$$$$
I have one Engel and another made by forget off hand but much less than Engel and they use
very low power and run off 12 volt and 110.
Look up portable ref / freez see what you get and check around prices but anything under $500
will not be as good like those Coleman

Hunter 36 Punta Gorda
Costway/ edge star/ whynter are ones I have and almost as good as Engel but been happy
and have Engel and costway on my 07 H-36 and edgstar in my RV and they use very low power.

Macgregor 26S near Vancouver, BC
@ronhanson01 ,

Did you mean 1 A-h per hour? Amps per hour would be units of charge/time^2, or rate of acceleration of charge rate. An interesting unit, but not very helpful in planning a boat's electrical system!

Catalina 34 224 Maple Bay, BC, Canada
Perhaps it's time for some of you to learn to use correct terminology.

Many people get confused when discussing Amps, Watts, Amp hours and Watt hours. Frequently the confusion is the result of incorrect use of these terms by some forum posters. Hopefully the following
www.cruisersforum.com
Likes: Ward H
R

Hunter 26 San Diego, CA
Geesh! Why bother to do the calculations, I'm just gonna use it. If my 80 watt solar panel isn't big enough to keep my battery bank charged, I'll get 100 watt panel. I have a Victron battery monitor, once I get the fridge and start using it the monitor will tell me all I need to know. The ICECO GO20 has good reviews, and it is said to have low power consumption. It fits in the space I want it too, should be fine for my needs.
Likes: ronhanson01

Macgregor 26S Hobie TI Ridgway Colorado
Likely... the fridge power use will be typical for these small efficient units. But you have to keep in mind that the heat loss from though the insulation is proportional to the temperature difference between inside and outside the fridge. For example, if the fridge inside is 40F and the ambient is 60F, that is a delta of 20F. If the ambient goes up from 60 to 80F, you now have a delta of 40F (80 - 40). So going from 60F to 80F ambient resulted in TWICE the energy loss through the insulation and with the efficiency of the fridge to cool, your power consumption might be three times higher at 80F ambient compared to 60F. Fridge power use can vary considerably.

So you have to consider that the power used by the fridge will vary a lot depending on ambient and you are trying to power it with solar who's daily output also varies a lot. Add in battery capacity that varies...

I think in Doug's case sailing relatively cool coastal mostly sunny S. Cal, 80 watts of solar and that fridge will be mostly OK. The main thing that will likely happen is that you will have conditions of either higher power use (warmer ambient) or less solar where the solar cant keep up that cause you to use more of your battery reserve which might be no big deal. If you run out the battery reserve.. not so good and it works your battery harder.

My only data point I'm fairly sure of is that I have a fridge with maybe similar power use and a 160 watt solar panel and I think the 160 watt panel is considerably more than I "need". However, I dont mind this much panel (except that its a lot panel area on my Mac 26S) because it tends to be easier on the batteries. Based on a few years use now {including several week long S Cal trips)I think I could get by with somewhat less solar. How much less.. at 100 watts solar, I think I would have to watch things closer with some sort of battery charge monitor and it would work the batteries a little harder. 120 W might be more comfy. At 160W, I never worry.. power luxury and the conditions of higher temp and low sunlight required to cause a problem would not occur often (never had it even come close to happening yet). My data point also assumes no partial shading on the solar panel.

FYI, I did some measurements on my fridge/ solar setup and tried to be accurate and give details. This is of course all not really necessary but I somewhat did this for fun (retired EE). Its on a link here 26S Electric Fridge
Last edited: Saturday at 11:36 AM

Macgregor 26S near Vancouver, BC
@walt ,

That's perfect, thanks very much! That's exactly the kind of information I need to plan the system for my next boat.

It's weird to me that the manufacturers of these fridges don't provide any of this information. At least, none of the one I've looked at do.