Precision 16 St Petersburg
I recently purchased a used Precision 16 and on my first outing the mast compression post failed. It was my stupidity, as I drove under some tree limbs in the launching area With a hole now in the deck I was able to look inside. It is apparent that water has been infiltrating there for awhile as the wood portions were mostly delaminated and weak. This either allowed the mast to pierce the deck or prevented massive further damage because it was already weak.

I took it to a couple of local boat yards and they each said around $1,500-2,000 to repair and more probably once they got in to take a look. I paid less than that for the boat so to me it's basically totaled, but I'd like to try and fix it myself.

My question is this: Is there anybody that has repaired theirs previously that could lend some guidance to me. I was thinking of aluminum plates with a pipe between them to transfer the load. This would require cutting a big section out of the deck though and I've never worked with fiberglass!
Any thoughts would be appreciated!

Precision 16 Savannah, GA
Oh my.....I thought that section would have been a bit more structurally sound! I also have a P16, so I'd like to hear what you end up doing....as I'm sure it can be fixed.

Hey, since you have a hole there, I need to replace my bow eye, and can't see how it's constructed on the back side....can you see that area through that hole? If so, can you get a picture?
B

Precision 16 St Petersburg
I haven't decided what to do yet. I have been milling it around mentally thinking of the easiest way to complete this. One of the boat yards suggested cutting an access panel to be able to complete the repairs and then sealing it with a storage type box. I like that idea and it would give me a place to keep some items watertight but is more complicated.

Cutting that panel may be a way for you to put a new bow eye in?

Once I get in there again I'll take a picture and post if for you, but I don't think it will be anytime soon.

Pearson P303 #221 RockPort Maine
Sorry to here the news! However for the cost of a repair @ 1600. You might consider buying another one and donate that one for a tax deduction..maybe. Good luck StarGazer P18 sold now P303.
B

Precision 16 St Petersburg
Yes, that has crossed my mind. But I'm thinking I might like to tinker with it some.

Precision 16 Savannah, GA
I'm thinking if you cut a deck plate into the bottom of the existing storage areas on either side of the mast step, you should have plenty of access to do any fiberglass work that you need.

Just cut the broken hole large enough to slide a new marine plywood support in, then fiberglass it down the the hull, trim it flush to the top, and build up the fiberglass on top to close the hole up and remount the mast step.

Precision 16 St Petersburg
That sounds similar to what I was thinking. But I was pondering cutting an access panel in front of the mast position and doing the repairs through that hole. When I'm done I would install something like this (requires a 18"x10" opening). That would give me some lockable water tight storage and if I ever needed to, a way to get back in. The little bin is about $170 new from SSI. My concern is that I'm creating some material weakness by cutting an opening in that location?

I was also thinking of raising the hinge point on the SS mast bracket so that there is not that much pressure on it when raising and lowering the mast. That would be a simple fix and just need to have some local shop cut and bend a piece of SS or aluminum in the right shape. 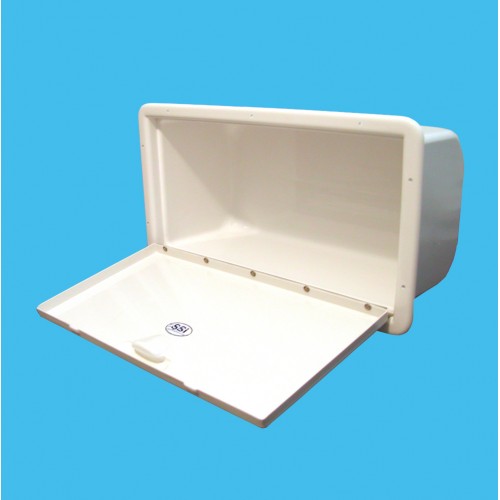 Precision 16 Savannah, GA
That would be a rather large hole.....and the front deck already flexes slightly when you walk on it. I'd be worried about the corners cracking over time.....but the extra storage would be very nice!

Check out: https://www.dwyermast.com/
They are the original manufacturers of the mast and all the fittings (including the step). You can still buy replacement parts from them. Maybe they have something you are looking for.

Precision 16 Savannah, GA
Just curious if you ever got this fixed or what you decided to do with the boat.

I recently had a failure on mine.....one of the shroud eyes snapped and sent my mast toppling down, ripping out the mast step in the process. I was able to get a new step from Dwyer Mast, and used some larger screws with the holes filled with epoxy to mount it back in place. Seemed to work well!
M

Precision 16 St. Pete
Reviving this thread. I recently discovered the original plywood mast-step on my girlfriends P16 was almost completely rotted away. I've documented the repair on Flickr with photos and a description of each step. jhartSAV nailed it; his repair suggestion was exactly the way I set about doing it (before I came across this thread). Anyway, I figured I'd post up the repair details as they may be helpful to other P16 owners who stumble across this thread. I bet most of the boats out there have this problem by now and will need fixing.