Between Boats near Vancouver, BC
Is there any model year of H260 you would prefer over the others, or prefer to avoid? And why?

Now that we're getting close to the border between Canada and the U.S. opening, I'm ramping up my search for a Hunter 260. I'm interested in people's thoughts about differences between the model years. I've collected enough data to have a pretty good idea what's a fair price range, based on model year, and I can afford even the latest models years, so that's not a factor. I'm also fine with buying an older boat and doing maintenance, so long as it's still a good deal price-wise, so that's also not a factor. But I don't know much about the actual design differences between the model years.

Hunter 46 Point Richmond, CA
The boat was produced between 1997 and 2005 and I would not be surprised if there were not some interior and exterior differences between years with overall dimensions the same. What year boat(s) are you interested in buying?

What I understand the Hunter 260 is offered in 2 configurations: The standard version has a swing centerboard that draws 6 feet when lowered and has a water ballast system that makes it ideal for towing by allowing you to add 2,000 pounds of displacement after launching. The displacement without the water ballast is 3,000 pounds, which is well within the towing capacity of most full-size cars and SUVs. The optional fixed-keel version has a bulb wing keel and a shoal draft of 3 feet, 6 inches.

Confused - do you mean:

We have a '02 H260 w/a tiller. The feature I really did not consider and now love was the sugar scoop stern. Excellent access to swim off and stern tie (to step onto a beach): 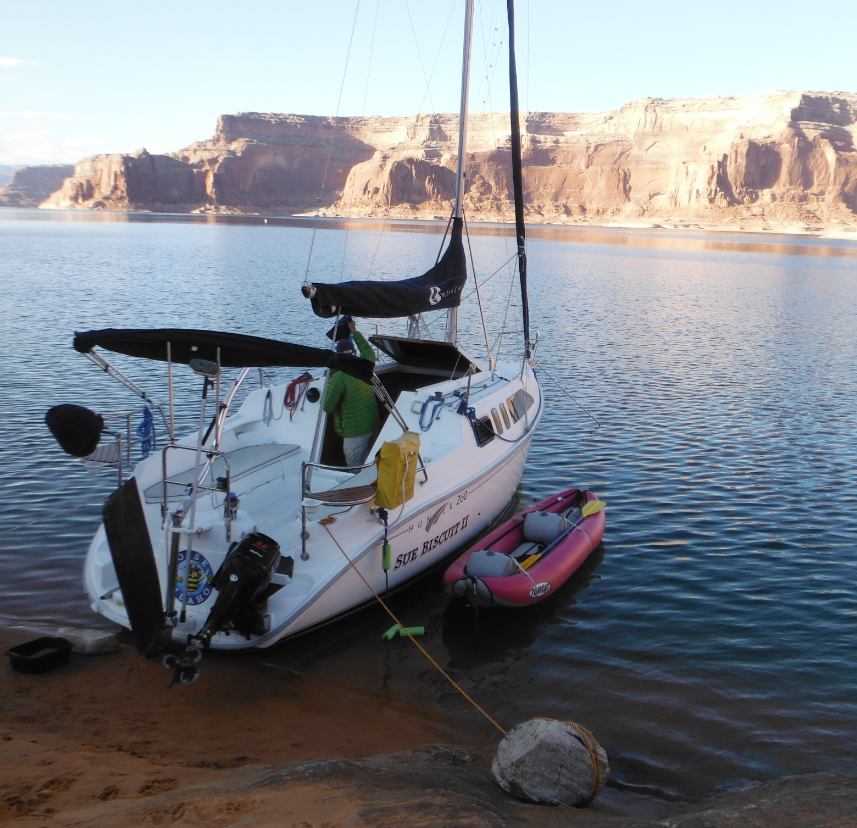 As an aside - does anybody know if production numbers are available for the 260's?
Likes: sail sfbay

Hunter 260 Cave Run Lake, KY
I'm a fairly new 1998 260 owner. The two changes in later model years that I'm aware of are:
(1) the lifeline stanchions were reinforced with angled support brackets at the base
(2) I think the mast struts were made adjustable in length with a threaded end- this does not really matter after they are installed but may have saved time during assembly at the factory
My '98 has neither of these- the stronger stanchions would be nice, but might be something else to trip on going forward.

Between Boats near Vancouver, BC
To clarify: I'm only interested in the H260 (not the 26) and only in the water-ballast version. I should have mentioned that I'm not interested in the fixed-keel version, but I kind of forgot it even existed. I adjusted the wording of my original post because I realized I'd made some kind of strange typo that created ambiguity.

So, what I'm interested in is model year differences in Hunter 260 water-ballast models. And, specifically, what it is you like or don't like about particular model years.

Between Boats near Vancouver, BC
Thanks, @caverun , that's exactly the kind of thing I'm looking for. I'd been told about the change to the spreaders, which is what got me thinking that there might be other model year differences I should be on the lookout for. The person who told me about the spreader change seemed to think the older style spreaders were better, but it wasn't clear to me why. Maybe the threaded bits coming loose? The stanchion change is interesting, too.
C

Hunter 260 Cave Run Lake, KY
Here's a picture of the newer stanchion- my '98 does not have the bracket that wraps around the base. 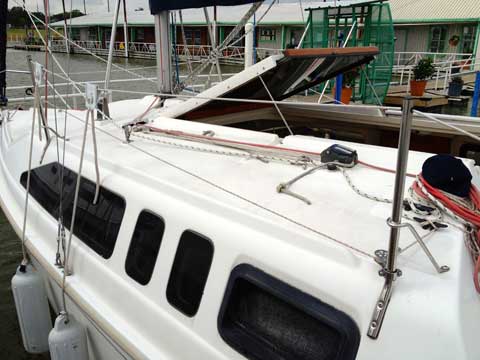 Hunter 260 Cave Run Lake, KY
One other thing I noticed when I was looking- they changed the stern rail attachment on the 2 forward supports. The older ones have the supports mounted on the lip of the deck/hull joint. The newer ones have the posts attached on the vertical face of the coaming:
newer: 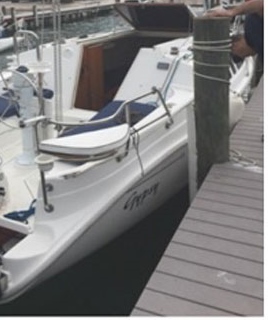 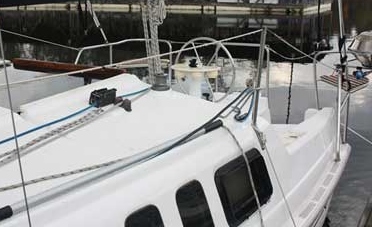 Not sure which is preferred, or why the change was made.
C

-na -NA Anywhere USA
The boat production of the 260 commenced August 1, 1997 till the last one picked up either in January or February 2006. It was the decision of the Luhrs group to stop production against advice of Hunter sales and me. Later they admitted it was a mistake due to demand. The keel version and water ballast version were officially introduced by me October 1997 at Annapolis.

The keel version referred to as the 270 displacing 5000 pounds. A 10 hp onboard Diesel engine was offered with that model only

The 260 waterballast dry weight was 3000 dry but displaced 5000 pounds. Both the 260 and 270 options included trailer, roller furling, wheel steering, stern rail seats, etc. After the first year at my suggestion the struts were made adjustable. I believe the lifeline stanchions were beefed up on both boats a year or two after replacing a few stanchions. The trailer was modified for the 260 sometime around 2004 due to too much overhang of the boat in Texas from a customer who was written up but believe that was only one occurrence. To my knowledge, the 26, 260 and 270 never received any tickets for minor over width.

I Believe that the masts were different for the first few years due to a screw up of Z Spar leaving the country without getting into that so it is suggested you know who supplied the boom and mast on your boat as it would be Charleston Spar, Dwyer Mast or later U S Spars

As for the 260, there were no other changes other than the adjustable struts. I was a dealer but was involved with the design team of boats under 30 feet which is why I know some things.

Between Boats near Vancouver, BC
That's great information, @Crazy Dave Condon , thanks very much.

It pretty much looks like boat condition, the right set of options, and value for the price seem like the main considerations. I'm not seeing any differences from year to year that are worth being concerned about.
T

Hunter 26 Carter Lake, Colorado
As an aside, I have a 1998 26 with the reinforced stanchions (not a 260). But I’ve only owned it for a few years so I can’t verify the history of the stanchions.

caverun said:
Here's a picture of the newer stanchion- my '98 does not have the bracket that wraps around the base.

caverun said:
Here's a picture of the newer stanchion- my '98 does not have the bracket that wraps around the base.

I keep looking at this picture trying to figure out what's different than my 94'. 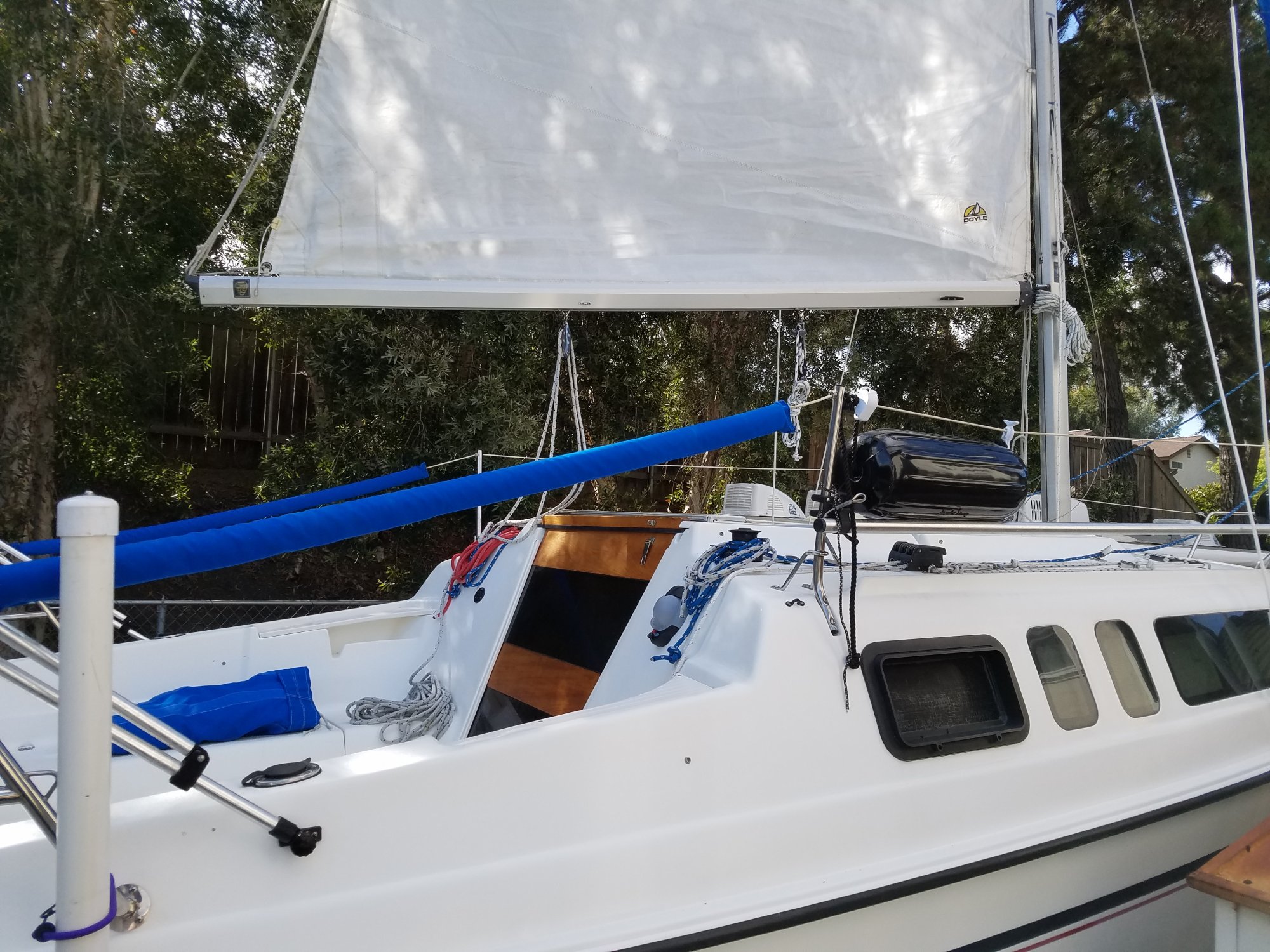 Doug J said:
I keep looking at this picture trying to figure out what's different than my 94'.

Guess they ran out of the reinforced style stanchions the week they built my boat Maybe it was not a model year change- but varied depending on supplier. Here's my '98 260 without the brackets: 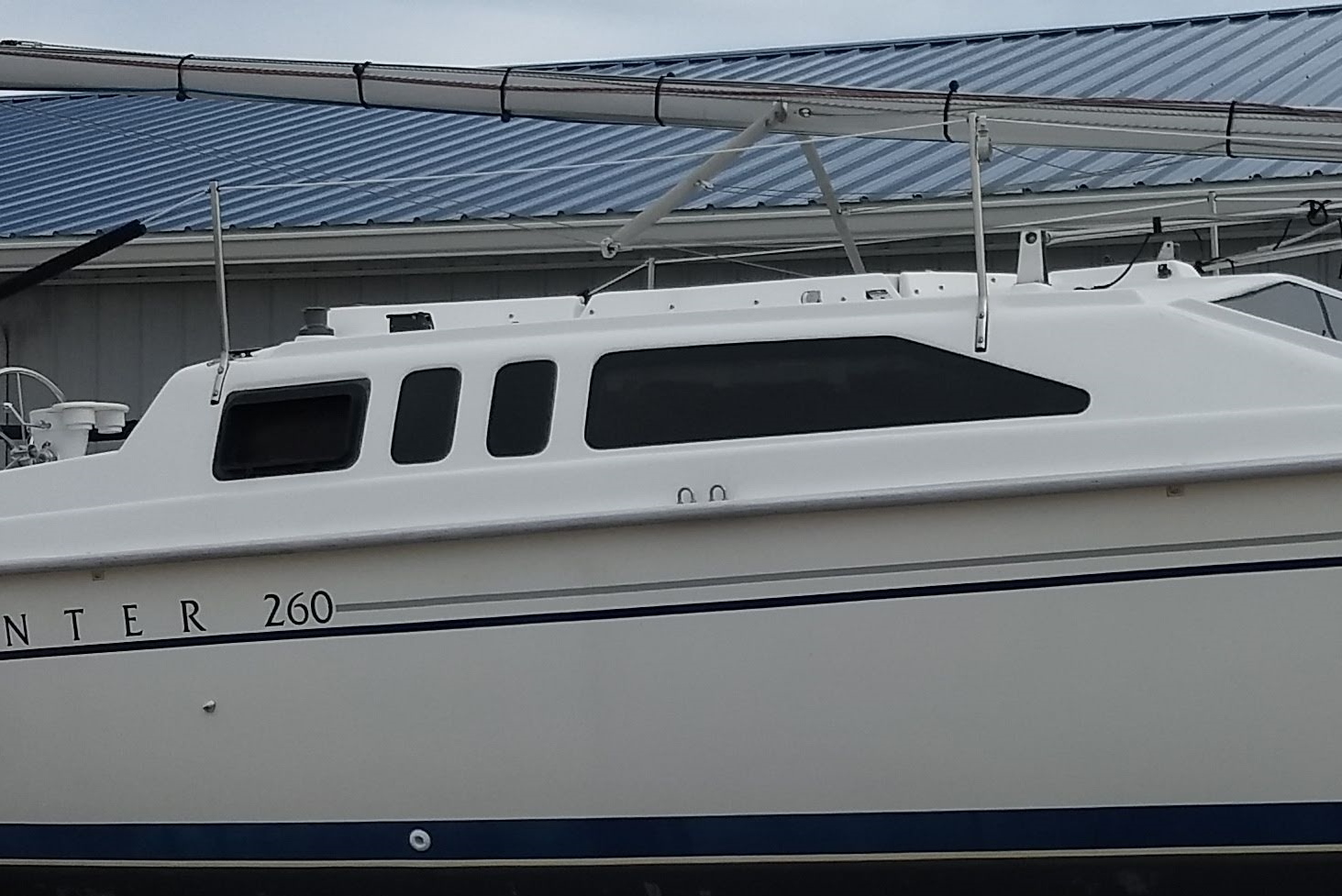 Hunter 26 Oceanside, CA
Oh wow! I can't say I've ever seen one like that. But you got wheel steering
C

-na -NA Anywhere USA
@caverun
Can you confirm if your boat is one I sold.

Oh, I meant in reference to the stanchions.
C

Crazy Dave Condon said:
@caverun
Can you confirm if your boat is one I sold.
Click to expand

Yes, I think it was. Battery selector switch and shore power outlet are on the aft wall of the port cockpit locker- that's how you did it right? And according to the 1998 title I got, the boat was originally sold to someone in Cary, NC. 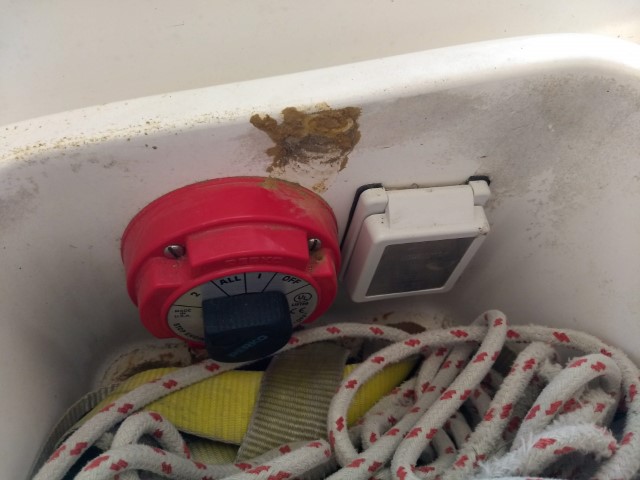